The slums of Rio de Janeiro

After hearing a glowing account of the favela tours you can do here in Rio de Janeiro, we decided to do a favela tour.  We are very glad that we did! 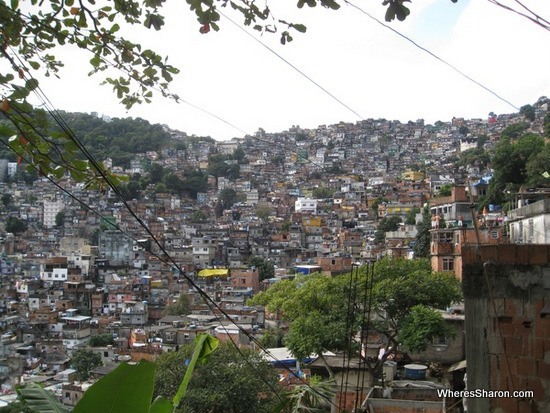 What is a favela?

A favela is basically the name given to the slums in Brazil. Rio has three hundred of these, with 20% of the city’s population living in one. It is becoming more popular to do a tour through one to see how the other side of the city lives.

So far I think we could be forgiven for thinking that Brazil is an affluent country. Everywhere we have been has been quite nice, and there hasn’t been too much evidence of poorer people and places. But they do exist. Despite having the world’s eighth largest economy, the divide between rich and poor is one of the largest in the world.

How’s this for a stat? 1% of the people own 50% of the land. Millions of people live in abject poverty and the crime rates are very high. The poorest people live in favelas that surround every city. In Rio, most inhabitants are from the North East and moved to find work. Most don’t have clean water, sewage or health care. Often, like in the case of the favela we visited, they are right next to very rich suburbs. Drug lords rule them. 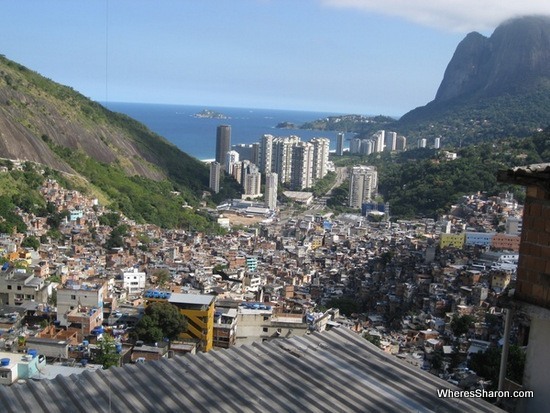 View from the top of the favela

I had always wanted to do a tour through one but had been worried that it would be like being herded through a zoo and this turned me off. But after the high recommendations of a fellow traveler that it was nothing like this, we were quite keen.

The tour of the favela of Rocinha

As you’d expect for this part of the world, the tour guide came late but soon enough we were standing at the foot of the favela of Rocinha, the one we would be visiting. It wasn’t far from where we were staying, neighbouring some of the better areas of Rio with fabulous views of the beach areas of Ipanema and Leblon. With about 200,000 people, it’s the largest favela in Rio. It is quite a sight, built into the hills. 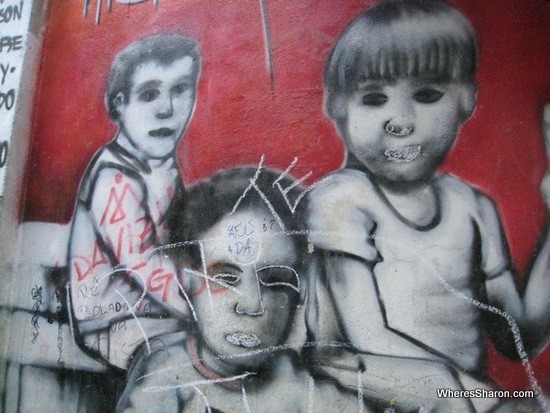 Graffiti in the favela

From our drop off point, us and about ten others as well as a guide, traveled like the locals do, on the back of a motorbike to the top of the slum. I was pretty damn nervous about this and had been dreading it. I hate motorbikes and consider them death machines and I never wanted to go on one. However I didn’t have much choice if I wanted to do this tour.

I gripped on tight to the back of one of the riders. We went up steep windy roads which didn’t help my nerves.  Thankfully it didn’t last too long and I was still alive at the top. Unfortunately, Josh loved it and it started a whole new round of how he wants a motorbike and me replying that he must also want a new girlfriend.

The views along the road to the top did not look too bad. Like your average town in the poor countries of Central America. At the top, the guide started with his introduction and pointed out some points of interest. He was very knowledgeable and made us feel very comfortable while filling our heads with facts. He pointed out a medical center which couldn’t have been more than two rooms which was there to service the whole favela. They were lucky to have that. He pointed out a graffiti tag of ‘ADA’ which would see throughout the tour. It is the drug gang that is in charge of this favela.

He told us to look out for a guy carrying a walkie talkie at the entrance to the favela. This is the look out for the entry that warns the rest of the gang if another gang or the police are approaching. If they are, he lets off a firework to warn them. If this happened, we would need to clear out quick.

During the tour we also saw a gang member with a big assault rifle. They all look very young as they don’t last long, usually being dead or in jail by their late twenties. The guide said the previous leader of the gang had only been 21 (he’s now in prison). 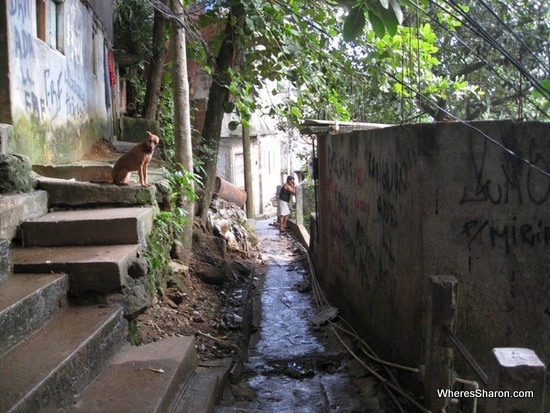 The main pathway through the favela

Basically we walked down a windy path that was like the main road of the favela all the way to the bottom. There were lots of stops to learn more, take photos or interact with the locals. They were very strict about us not giving money to beggars and in the six years of running these tours this has obviously worked as no one asked for money. People who had done so in the past had been instructed to do something or sell something if they wanted money, and there was a stop in an art gallery, some jewellery stands and some boys played some music. It was well done and added to the experience. It also gave us a chance to help people out without just giving them money and encouraging begging. I bought a bracelet and in a stop in a bakery we pigged out on one of the best treats I have ever had – big donuts stuffed full of caramel like what you find in caramel slice but runnier – so nice!!! It’d be worth risking going back for one of those!

At the beginning, things didn’t seem so bad and it was a lot like an average poor town anywhere, however as the tour progressed and we got further in, the conditions deteriorated rapidly. We were told the properties near the top and especially near the bottom were the most expensive as they are closest to transport. In the middle you have a long walk and the facilities are grim. Rubbish was everywhere as well as open sewers. It was quite terrible.

They are lucky in this favela as most homes are built out of concrete.  They are small although the ones we could see inside looked quite pleasant. They obviously make the best of the situation. The cost of the homes is more than I would have expected. To rent, they range from about 100 – 600 reals a month, to buy you are looking at 5000-50000 reals depending on size and location. (It’s about 1.5 reals to an Aussie dollar.) With a minimum wage of 415 reals a month this is a fair amount. I was kind of surprised to hear the minimum wage. Things here are not that much cheaper than home and it must be very difficult to live on that wage. 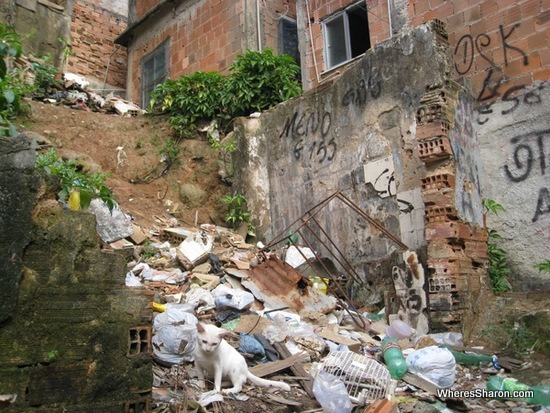 Some of the rubbish in the favela

It is not really completely what we expected. I guess I did expect things to be direr and I was surprised to see all different types of shops the way down, even things like internet cafes. According to the guide book, 93% of homes in there have a television, 23% even have a credit card! It’s a very interesting place and the tour was very well done. I felt safe the whole time and not at all like I was invading or the people were on show. It was a positive experience.

At the end, we were back down the bottom where we started. It was surprising when the guide pointed out where we started, it did not seem like we had come so far. We were taken back to the hostel very glad that we had had the experience. It was an amazing, thought provoking experience and definitely a must do for anyone coming to Rio.