Off the beaten track – travelling through the Guianas part 1

Have you heard of the Guianas?  Do you know where they are?  Would you like to go there? 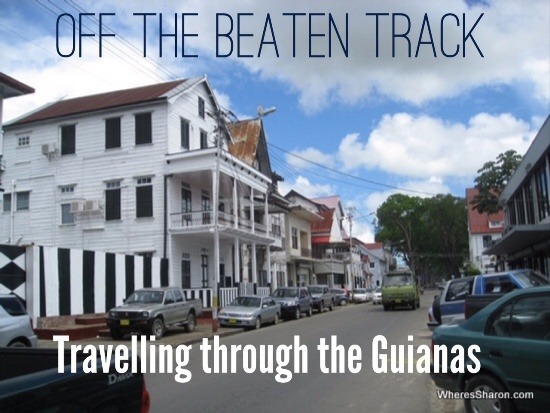 Hopefully, this post answers some of your questions about travelling through the Guianas! Or at least helps you find them on a globe!

The Guianas – An introduction

The Guianas are a region on the North Eastern coast of South America.  The Guianas consist of three territories – Guyana, Suriname and French Guiana, although some people include parts of Venezuela and Brazil as well. 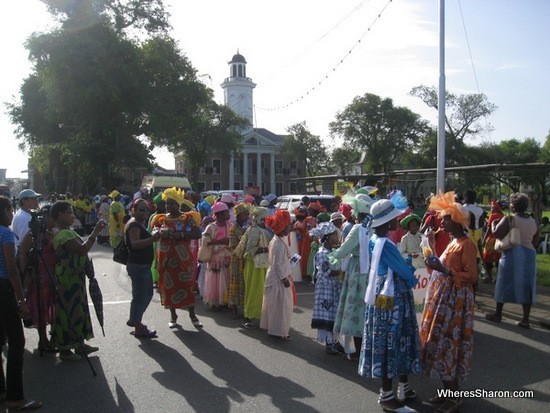 The Guianas did not attract early European settlement. The coastline is muddy, covered with mangroves and was sparsely populated with hostile Carib Indians. The Spanish saw the coastline in 1499 but found no gold or cheap labor and it took until the late sixteenth century before the Dutch took interest in the land. Most indigenous people died due to the introduced diseases and so the Dutch imported slaves from Africa to work on their plantations

This past makes the Guianas are an oddity in South America.  Unlike all the other countries on the continent, they were not settled by Spain or Portugal, instead they ended up being the colonies of Britain, the Netherlands and France.  Guyana (formerly British Guiana) and Suriname only became independent nations in 1966 and 1975 respectively.  French Guiana is still part of France.  It was weird to be in the European Union while still in South America! 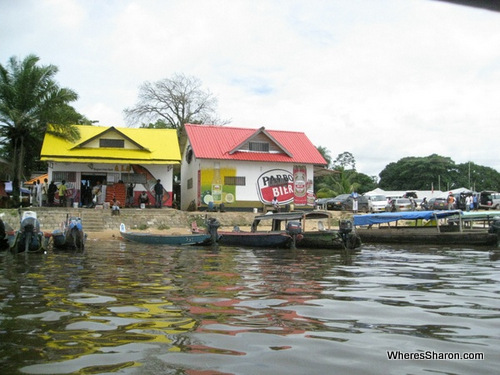 Saying goodbye to Suriname from the canoe which would take us to French Guiana (and the EU!)

The Guianas are not what many people imagine when they think of South America.  Indeed, I think many people don’t think of them at all.  This is why I wanted to go to them.  I knew very little about them, information was scarce and, like I wrote about on Monday, I want to experience everywhere, so I was sold!

Where did we go in the Guianas?

In the Guianas, there are not many places to go.  Mostly this region is covered with trees.  There are not many roads and the ones that exist are usually in poor condition.  This leaves tourists with basically two choices – stick to the coast, like we did, or venture into the interior.  The interior is the main tourist attraction in this region thanks to many natural attractions and extensive pristine tropical rainforests.

We stuck to the coast for two reasons:

The vast majority of the people live on the coast.  However, there are not many people in this part of the world, so there were not many places to visit.  We ended up basically going between the three capitals – Georgetown, Paramaribo and Cayenne – with a stop added in at St Laurent as well to check out French Guiana’s convict past.

The only thing I had really knew about Guyana before I went there was the 1978 tragedy at Jonestown. This was the 913 person mass suicide/murder performed by a cult called the People’s Temple in a remote corner of the Guyana rainforest. 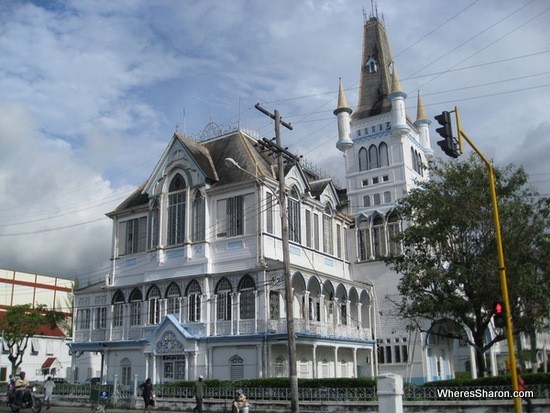 There is obviously more to Guyana than this. British Guiana was born in 1834 after the British took over from the Dutch.  After the abolition of slave trade, Africans refused to work on the plantations so indentured labor was imported from India. Until 1953, Guyana was run as a British colony. At this time a government was elected and a new constitution instituted. In 1966, the name was changed to Guyana and it became an independent member of the British Commonwealth. In 1970 the Republic of Guyana was born with an elected president. The official language is English.

Thanks to this past, Guyana has an interesting cultural make up.  According to recent stats online, 43.5% of the population is East Indian, 30.2% are African, 9.2% Amerindian and the rest are a mixture or from somewhere else. The majority of people in urban areas are of African descent however, and they hold most important positions in the country. There are racial tensions here and the two major political parties are formed along racial lines which has lead to problems in the past with violent protests lasting for weeks in 2001.

Our first view of Guyana was from the plane from Barbados.   The rainforest seemed to stretch on forever, and we were not surprised that this region is known for its pristine natural attractions. 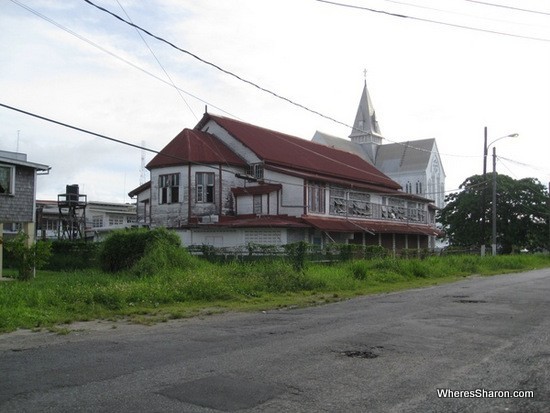 Exploring the streets of Georgetown

Our next view of Guyana was of Georgetown, reputed to be one of the dangerous cities of South America.  It was not as pleasant as the view from the air, but it was not that bad either.  From the many government warnings about travel here, I think I expected to see people running around the streets with guns or something, but it did not seem bad to me at all.  There were quite a few people out on the streets, but everyone looked quite busy and not like they were standing around waiting to rob me.

The Indian influence was much more evident than the Caribbean countries we had been visiting.  There were Hindu temples, mosques and cows wandering around, much like in India.

Things to do in Georgetown?

Central Georgetown basically consists of wide streets lined by dilapidated colonial architecture.  The streets often had canals on either side and pathways surrounded by grass and trees running down the middle.  It was pretty in a run down, I’m definitely somewhere different, kind of way.  Unfortunately, there was a lot of trash. 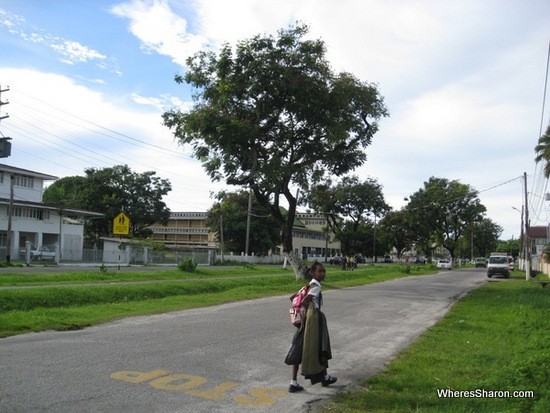 Exploring the streets of Georgetown

There are not many attractions in Georgetown and I would say there is nothing must see. The best thing to do in Georgetown is to just walk around and take it in.  There are many buildings to walk past that are quite pretty on the outside – such as St George’s Cathedral (the world’s largest wooden building), the town hall and the magistrates court. 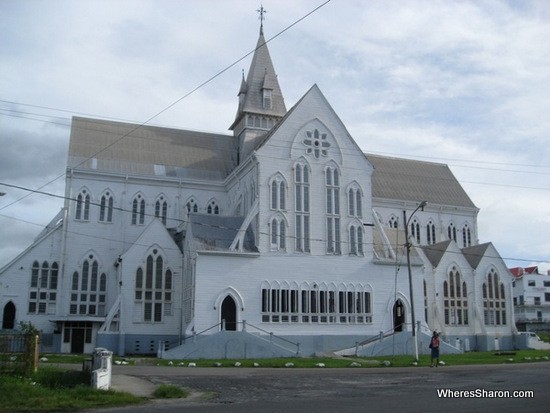 There is also Stabroek Market, the local market.  We actually did not go in there as it just didn’t feel right.  Later on we actually realised the Australian government specifically advised not to go there!  J went by the Promenade Gardens which were also warned against, but he thought these seemed fine and had security, so this could be worth a visit.

Another thing to do in Georgetown is the National Museum of Guyana.  This was a random collection of objects, and I can’t say we were very impressed.

Our favourite thing to do in Georgetown was actually to go to the cinema!!  There was a great old cinema called the Astor Theatre.  It was very cheap and atmospheric.  We didn’t realise our ticket entitled us to two movies and a worker at the cinema actually chased us down to the restaurant where we had lunch to let us know we could go back!  Fabulous service. 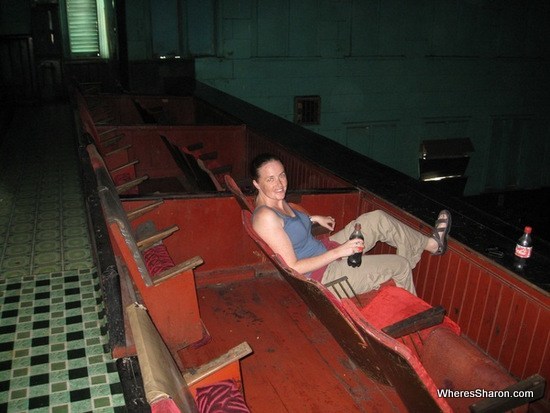 In the posh section at Astor Theatre

All in all, Georgetown really wasn’t that interesting.  It was a nice enough place to walk around, and it was definitely somewhere unlike anywhere else, but one day would probably have been enough – we spent only two nights and one and a half days, and we still managed to get bored.  On the upside, we did learn a new word – “condomize”.  There were lots of billboards telling people to abstain from sex or condomize.  I’m guessing HIV is a big problem there.

Have you ever considered travelling to this part of the world?  Do you know anyone who has?