When it came to choosing a honeymoon destination we decided to try something new – a nice relaxing break on the Pacific island of Vanuatu. Whilst by nature we’re explorers and it’s hard for us to not wander, it was a honeymoon and we wanted the opportunity to take it easy on our Vanuatu honeymoon. 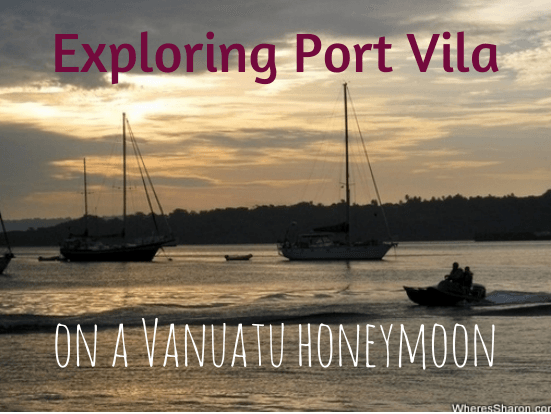 To get to Vanuatu from our home city of Melbourne takes somewhere around four and a half hours. Our trip was further extended by a stop over in Sydney airport.

From Sydney, we flew on Air Vanuatu.  Despite being an older plane with fixed overhead TVs that had just one thing showing, the flight and service was nice. There isn’t much to see on the flight though. We saw New Caledonia, but otherwise it’s nothing but blue ocean.

We arrived in Port Vila just as it was getting dark. It was warm and sticky, and a light rain was coming down. Immigration was straight forward.

Just after we past customs, we found the desks of each of the main resorts. They pointed people in the direction of the various shuttle buses who ferry people to their end destination.

Our resort was the Iririki Island Resort which is on its own island in the middle of the bay at Port Vila. The resort had its own ferry, operating 24 hours a day. Our bags were carried from the bus to the ferry and later up to the reception where we were checked in.   You can read more about our resort in a honeymoon review of the Iririki Island Resort.  It was the perfect spot for a Vanuatu honeymoon. 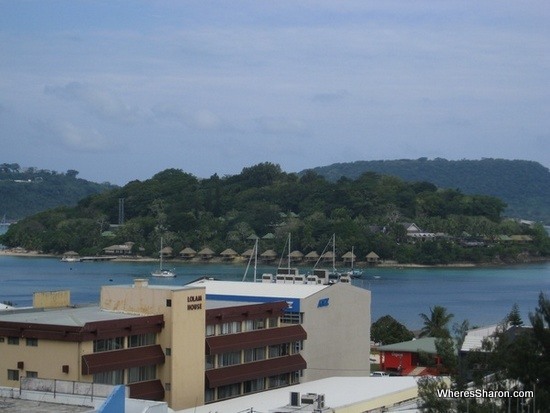 Views of our resort from Port Vila

Things to do in Port Vila

We spent a fair bit of time in our resort, but we weren’t content to stay in the resort all the time.  We enjoyed exploring the things to do in Port Vila on our Vanuatu honeymoon.  To be honest, there is not all that much.

The best thing to do in Port Vila is to go on a big walking tour.  We used a map from our guide book.  It is not a big place so it is easy to discover it on foot. 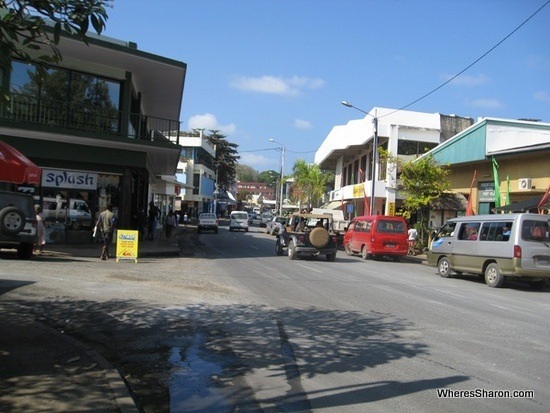 Central Port Vila is small. The biggest buildings were banks. There were a few construction sites for shopping centres. Many of the fancier stores were duty free shops. It didn’t take long to get out of the commercial district which off the main highway consisted of little more than a few basic stores selling staples.

The suburbs of Port Vila are lush and green. It wasn’t long before we hit almost jungle like vegetation. Houses are on large blocks, overgrowing with trees and grasses. The ni-Van (as the people refer to themselves) are friendly, too. Nearly every time we passed someone in their yard, they smiled and said hello or waved. Virtually no one during our entire stay tried to sell us something we weren’t interested in.

We walked past the President’s residence which wasn’t that fancy. We walked up two hills called Numbawon and Numbatu. During the war, Vanuatu was used as a large US airbase.  These hills held radar installations called Number 1 and Number 2 (there was a Number 3 further to the south).  The locals adopted the names, converting them into the local language Bislama (see more about Bislama below). 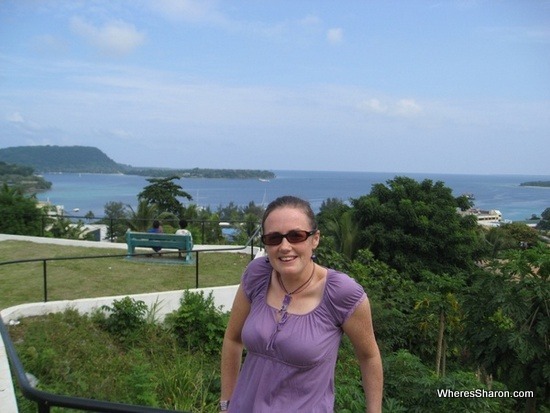 On Numbawon, we passed some old colonial buildings now in use as government departments, the main sports ground, Independence Park, where the nation was formally declared in 1980, and some nice lookouts.  From here, we could look out over the town and out to Iririki Island.

We were following a walking tour in our guide book.  When it pointed out the Pikernini (Bislama for little kid) kindergarten as part of the tour we felt it was getting a bit desperate. We decided the museum would be our last stop.

The National Museum and Vanuatu’s history

The National Museum is a relative popular thing to do in Port Vila.  It is in a small building just across the road from the nation’s small, perfunctory looking legislature.

The museum’s collection focused mainly on pre-colonial Melanesian tribal artifacts. There were weapons, ceramic bowls, totems, statues and all the artifacts from day to day life before the Europeans arrived. The totems and statues were most noticeable for the prominent penises that their creators endowed them with.

The museum shed a little bit of light on the colonial era. Vanuatu’s colonial history is an interesting one. From the late 18th century the islands went between British to French hands several times; sometimes different islands being held by different nations. In the 1880s, the two formed a joint Naval commission to manage issues and in 1906 formed a joint administration called the Condominium.

The Condominium threw up some interesting quirks. British and French citizens remained subject to their own laws meaning there were two different court systems except for the Supreme Court. This duality extended to driving – it was legal to drive on both the left and the right sides of the road! The Condominium lasted until 1980 at which time Britain and France stepped out of the picture, leaving the ni-Vans to themselves. Vanuatu was born. 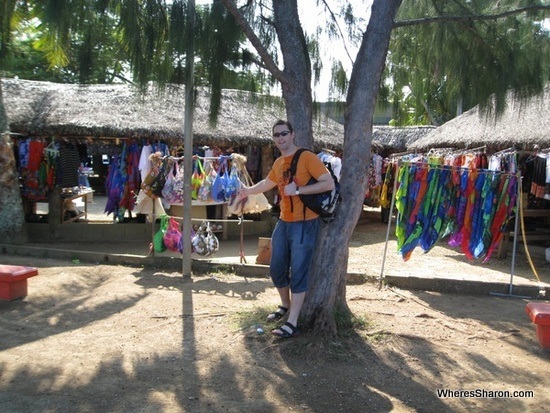 Something we struggled with in Port Vila was how early shops seemed to shut.  Despite what signs might say on shop fronts, it seems the true closing time was around 3:30. The normally quiet streets are packed with students and workers making their way home at this time.

One place that never seemed to close was the central market. The market was little more than an open shed with tables. It was open literally 24 hours a day except from noon Sunday until midnight Monday.

We checked it out on a Saturday, the busiest day of the week. Stalls overflowed from the market.  Many sellers made do with a blanket on the ground. On offer were seasonal fruit and seafood, either in baskets or simply in neat piles. There were passionfruits, yams and bundles of crabs, all sitting there with their claws tied.

At the rear of the market were food stalls selling workers basic ni-Van food. These were mainly rice and stews, served with vegetables and meat. The meat was usually beef, but sometimes fish or chicken. The meals were very cheap. 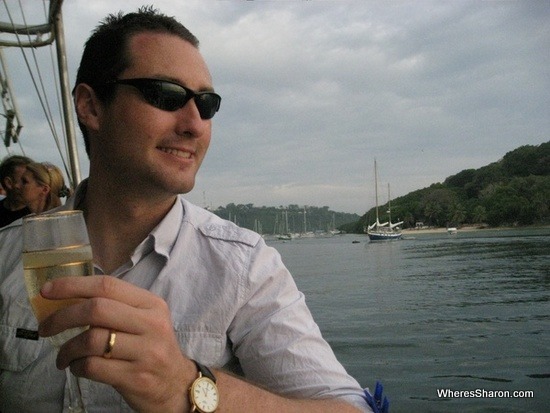 Our favourite thing to do in Port Vila would have to be a sunset cruise.  A few hours on a boat with some drinks is the perfect activity for a Vanuatu honeymoon.

Sadly, there was not much of a sunset as it was a cloudy night. Thankfully, this was made up for by the drinks. Our cruise came with three included drinks with pegs used as tokens. I managed to score an extra peg, which I was very happy about. We enjoyed champagne and Tusker, the local beer, as the clouds changed colour whilst we motored round the bay. It was a lovely couple of hours.

We had a fabulous time dining on Iririki Island Resort and Port Vila turned out to be a great place to eat out as well.

Our best meal was at a steak restaurant recommended by the guide book. Organic beef is a real speciality of Vanuatu. We were keen to try it out. The steak and other food was great, but the highlight was the lobster that I ordered. A ‘small’ lobster, covered in a hollandaise sauce was delicious and excellent value.  The dining options are another reason we loved our Vanuatu honeymoon.

Although French and English are the official languages of Vanuatu, it is Bislama that is spoken most widely. Bislama is supposedly a pidgin English, and when it is written down you can almost make out the resemblance. But the resemblance tends to be fleeting. Aurally it is impossible to understand. It makes even the creole-English dialects of the Caribbean seem intelligible which is really saying something.

We loved our honeymoon.  We didn’t get up to much compared to our usual trips, but there are not many things to do in Port Vila unless you’re using it as a place to jump off for tours of other places. We just relaxed instead, and it proved a wonderful place to do just that. We ate well, and we loved our resort.  For us, it was the perfect honeymoon destination.

Where did you go for your honeymoon?  Would you recommend it?