That time we were left to starve in Argentina

Censuses, I guess, are a necessary pain in the ass all around the world. However, I’m never going to complain about filling in a census form again. That’s because I have experienced census day, Argentine style. At least they don’t starve people on census day in Australia. 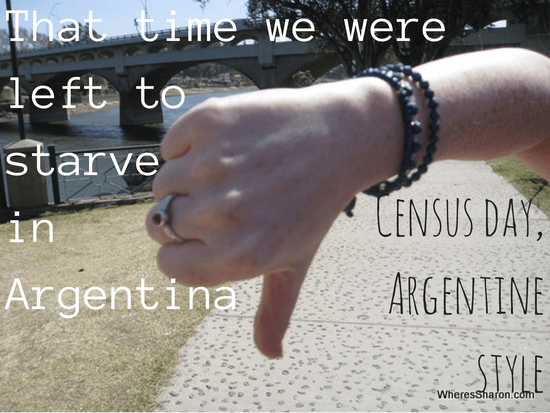 We had slept in in our hotel in Cordoba, Argentina’s second largest city.  We left our hotel room just in time to meet the 11am cut off for breakfast.  Our hotel breakfast was strangely served in a cafe across the road.  We had a shock when we left our hotel room and found the the streets deserted. We were staying on the main street in town, and it had always been very busy every time we had come and gone.  However, this time there was no one and nothing moving.

We walked to the breakfast cafe. That too looked shut.  J said the hotel guy had said to ring the bell if the door wasn’t open… I guess that should have warned us that something was going on.

Initially, we thought it must have been a public holiday although that was puzzling too. Things just seemed too dead. We then saw something on the TV in the cafe about census day. It still didn’t make too much sense to us though. Everything completely shuts down for a census?

We walked back to the hotel and asked the man behind the desk.  He told us it was census day and everything would be shut down until 8pm… 8pm!!

What would we eat? What would do? I was annoyed they hadn’t told us the day before so we could have stock piled some food.

Another hotel worker suggested going to a nearby town called Villa Carlos Paz. We had planned to go to a different nearby town, but we assumed that would be shut up too.  At least Carlos Paz had a lake to walk around… that couldn’t be shut… could it?!

Carlos Paz is meant to be a busy tourist town, so we figured that surely more things would be open.

The government wouldn’t leave poor tourists to starve… Would they?

Off to Carlos Paz

We headed to the bus station. It was very freaky to go past the deserted main square. Everyone was meant to stay at home until the census people had visited them. Thankfully, some buses were running and we didn’t have to wait too long to get on one.

Most of the nearly hour long drive to Carlos Paz was through the large city of Cordoba. It was freaky. By this time it was midday and there was barely a soul around.  Everything was all shuttered up, even people’s houses. Surely census day doesn’t mean people have to also keep their homes dark?

Arriving in Carlos Paz did not give us much hope. Everything was all shut up as well. We were surprised to see the tourist information centre by the bus station open. This gave us hope, especially when the guy gave us a map and told us everything we could do, most of which required things to be open. We couldn’t buy crafts without shops being open, right?

We asked him, and that’s when he said everything was shut with a laugh. The things he were saying were suggestions of things we could do tomorrow. It was quite frustrating. If they were actually going to keep the tourist information place open surely you could equip it with someone who wouldn’t act like all the town was still running or even better, couldn’t they have a list of what was open? Although maybe they didn’t have a list because everything was shut. Our stomachs rumbled at the thought and we headed into the center with only a little bit of hope remaining.

By this point, I had started the biggest swearing session I think I have ever had. It continued for the entire day. They were going to starve us.

I have never seen a place so dead. Even when I was in a shut down Bangkok during the last coup, they still fed us. We started looking out for a big hotel.

Surely places like the five star Sheraton we passed on our way out of Cordoba wouldn’t starve its guests? Or maybe they would. Maybe this was a big conspiracy of the Cordoban government to starve all it’s tourists.

I was going delirious, a combination of the hunger, the thought of further hunger and the swearing session.  At least we still had some water left from the day before. Although then I realised I couldn’t drink too much – no places open meant no toilets. Something else to swear about.

The centre of Carlos Paz

We walked to the middle of town where we had expected to find a big plaza and the massive cuckoo clock that we had read about in the guide book. Once again, the guide book was wrong and we were left wondering if they had even been here. There was no two storey garish looking alarm clock. It wasn’t that big really and looked ok. There was no plaza either. 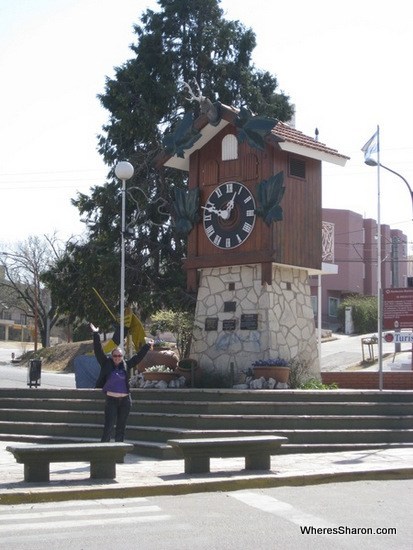 We had always been planning on coming to this town. After reading that it was a ‘slice of Vegas’ we didn’t feel there was much choice. Unfortunately, we didn’t see anything that was listed in the book except the clock. This includes things like Egyptian pyramid and Kremlin hotels, miniature trains and ‘fun parks galore’. It was quite disappointing.

It was reasonably pretty though, being set on a lake. We would probably have found it much more beautiful if we hadn’t just been in Bariloche. It didn’t come close to that.

We didn’t spend too long at the cuckoo clock as we noticed a nearby shop was open!

We hoped it wasn’t a mirage like a shop we had seen on the way that had an ‘open’ sign only to see on closer inspection that it wasn’t and it had a ‘shut on Wednesday 27th’ sign in Spanish. This shop was open and it looked like a bakery. We raced in but we were soon disappointed as it only seemed to sell jars of jam.   The day just kept getting more bizarre.  The fact that just that shop seemed to be allowed to open and useful shops were not set off another swearing fit.

There were people further down the road so we headed towards them. There was a little shop open! We were saved! They were only serving through the window which was annoying as we didn’t know the names of a lot of things as we had not eaten any Argentine junk food. We bought some cokes, biscuits, chips and muesli bars. It was not the best lunch ever and I knew I would feel ill after eating it but there was little option.

We headed back to the cuckoo clock to eat and to watch as it was just about 1pm. There was a small crowd around it, everyone posed with cameras. It was a waste of time.  At one, a tiny bird came out and quickly cuckooed once and that was it. What a lot of fuss about nothing. We had expected more and maybe at least some music or something. It seemed the other people felt the same as we all looked at each other in shock and started laughing.

We then went back to the lake and sat and talked for a bit. At least that wasn’t shut. Then it was back to a still shut Cordoba.  It was kind of funny to go past a Walmart proudly declaring it is open twenty four hours when it couldn’t look more shut.

It was back to the hotel to camp out to 8pm, praying the whole time that the city would come back to life and we could eat something more than potato chips for dinner.  We finally were able to eat at 9pm.

All in all, it was a bloody annoying day. Someone could have warned us and it’s a bit ridiculous to shut absolutely everything up. In Carlos Paz, we saw signs warning about census day coming but there was nothing like that in Cordoba. Surely there were many people caught out like us and something should be done to help tourists who are around at the time. At the very least, couldn’t they have told us about it at the tourist information centre in Cordoba? Or the hotel? No signs, no verbal warnings, no nothing. A very poor effort.

It was one of my most annoying days of travel ever, especially as I don’t know what I could do differently to stop something happening like this in future.  I would hate to experience this again now we travel with kids.  It was hard enough for us to suck it up, they wouldn’t be able to .

Thankfully, this day was an anomaly and the rest of our time in Cordoba was fabulous.  You can read more about it in 7 fabulous things to do in Cordoba.

Have you ever experienced anything like census day in Cordoba?