This week’s Flashback Friday post is about the amazing experience of attending a cricket test match in the West Indies!! 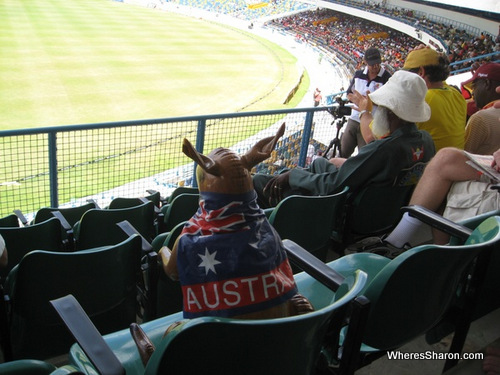 Why did I do this?

You probably think I am a cricket fanatic.  I’m not.  In fact, I can’t stand cricket, especially test matches.  They go for five days!!  If that’s not boring I don’t know what is.  Even worse, we only had one commercial TV station where I grew up and cricket would take over our set in the summer.  No cartoons for me. Not good.

When I discovered this was happening right at the time we were in the region, it took all of five seconds for me to convince J that we should go.  Unlike me, he is a massive cricket fan.  The third test in Barbados fit in with our plans so this is where we went. 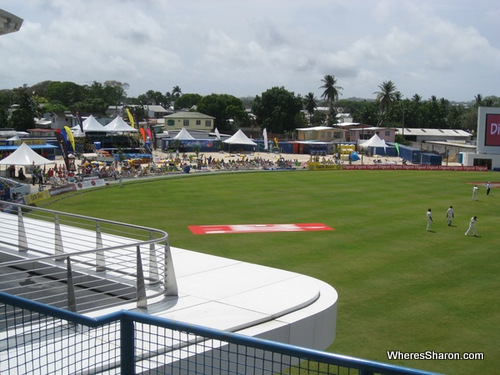 If you have ever seen the cricket on TV when it is in the West Indies then you probably know what I mean by the party stand. It is an area of the ground set up for foreigners (and some locals) to go a bit crazy and basically be stupid. To be honest, the party stand is the main reason I wanted to go to the cricket here.

In many ways, it was quite awesome. It was certainly unlike any other area I have seen at a sporting ground before. It was a pretend beach area at the side of the ground. There was no actual stand as such and this is where our problems lay. There were no proper seats to sit on and no shade, apart from if you were lucky enough to get into the ground first and grab one of the few beach umbrellas. It was hot and, even with applying suncream every two minutes, I still burned. 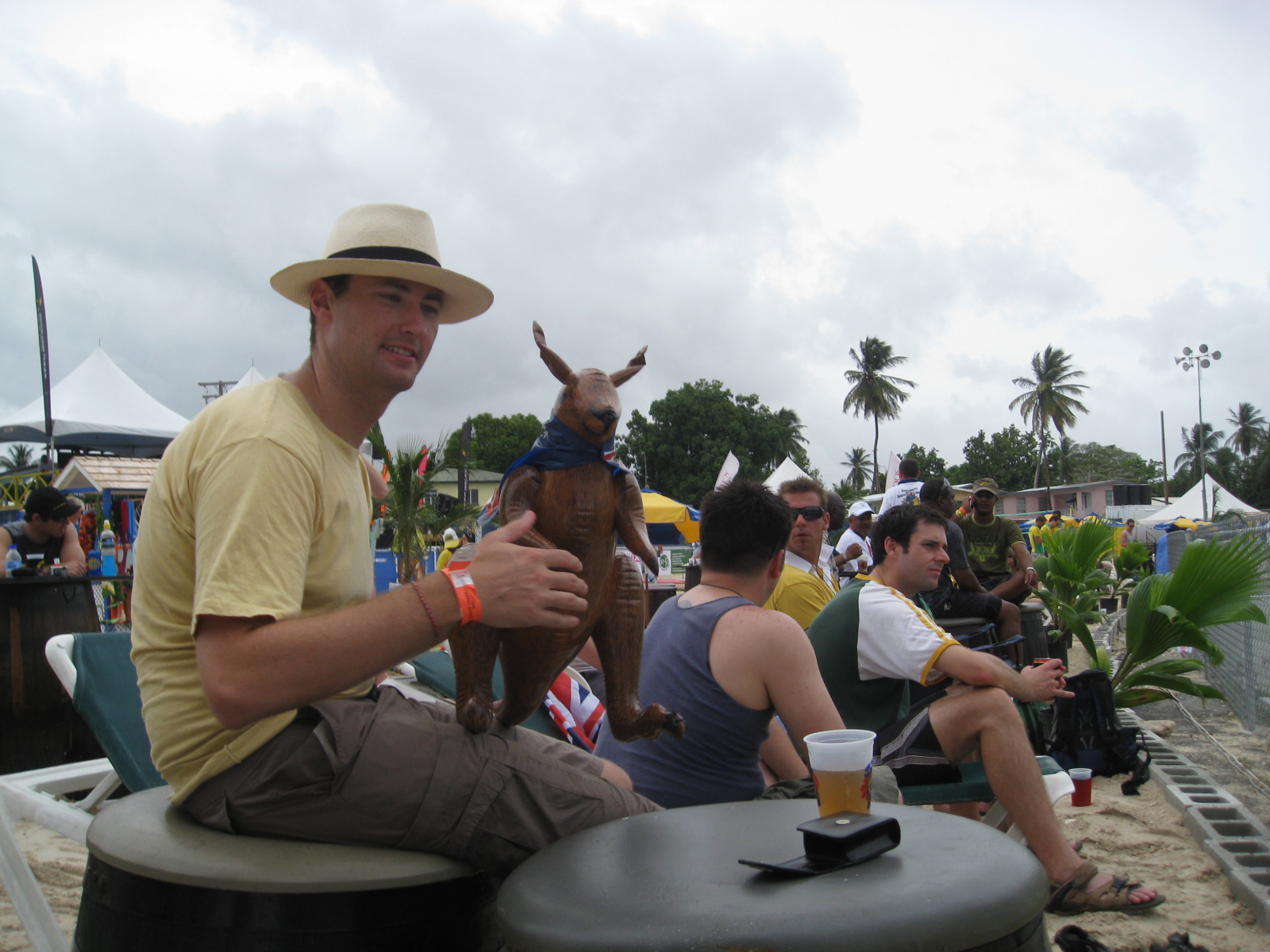 There was a big kids pool, a bar and an eating stand. Lunch and unlimited drinks were included in the ticket. There was even a beach volleyball court and some jet skis to sit on.

We were so excited by the party stand concept that we spent the first day here. It was fun and we enjoyed mingling with the other Australians and West Indian supporters. We talked to many Australians, but we didn’t come across any others that lived in Australia. All of the rest of them were based in London.

The game had to stop just before 4pm on that day due to rain. We were involved with a backyard cricket style game while we waited to see what would happen which was lots of fun. 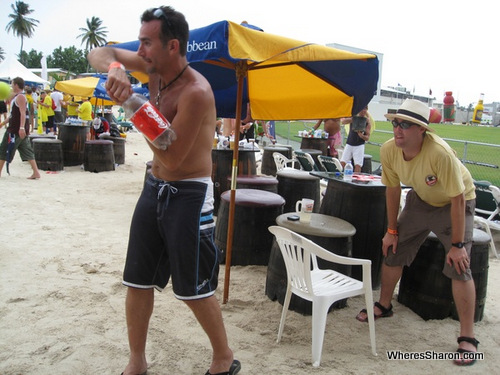 J ‘wicket keeping’ at an impromptu game in the Party Stand

We enjoyed our day in the party stand. It was lots of fun and one of those things that we just had to do. We didn’t end up returning to it though, thanks to the lack of sun cover. I was sun burned too badly.

Watching a match in the normal stands in the West Indies 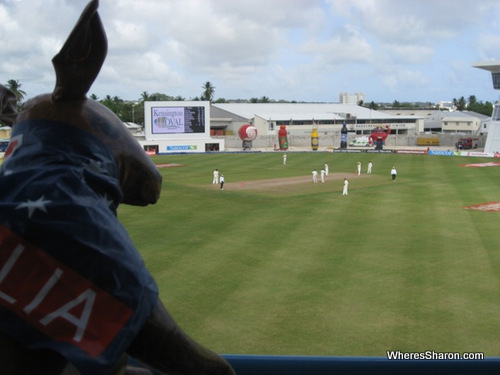 It was nice to be surrounded by West Indians.  If we wanted alcohol, that was still available.  We could actually buy whole bottles of rum at the ground! 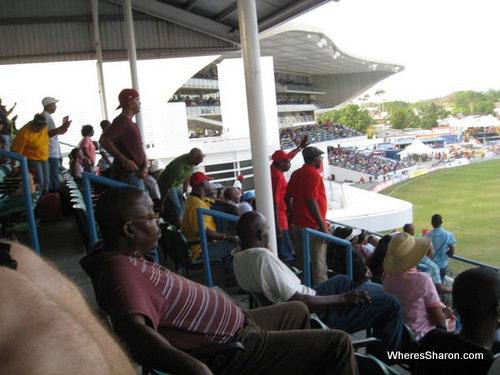 The crowd at the end of the day

The supporters were amusing most of the time.  On the last day especially, there was a great atmosphere when it looked like the West Indies were in with a shot.  However, they did ruin our win a bit with all the carry on and screaming, so we couldn’t hear the speeches.  This was a much better place to sit though if you actually want to see the game or not be burned.

Many Australians sign up for expensive cricket tours to see Australians play overseas.  This was outside our budget and really not necessary.

Arranging accommodation was easy.  I found a place online and emailed them and it was arranged.  We paid only US$50 a night for a studio apartment by the beach in Worthing.

The tickets were more complicated.  We emailed, rung and did not get very far.  We ended up being able to book party stand tickets for the first day via email.  We picked them up on arrival in Barbados.  We also bought tickets for the second day in the stands at this time.  We never saw the ground full though, so we could have just bought tickets as we went (which is what we did on the other days).  This cost was US$75 for a day in the party stand (including lunch and unlimited drinks).  We paid US$30 for normal tickets in a good stand and only US$5 on the last day.

Honestly, we had a great time. 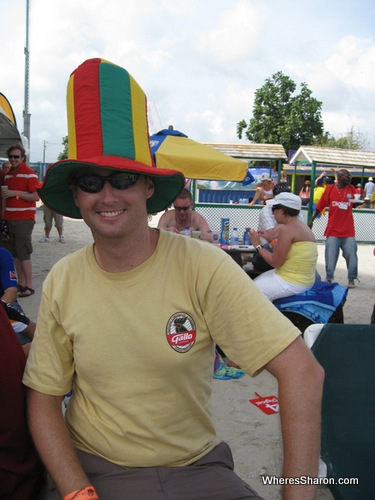 Josh borrows a hat from a West Indian supporter

The party stand was a bit disappointing because of the shade issue.  We did enjoy sitting in the regular stand though so we got over this quickly.  I’m still a bit shocked that I actually went to all five days of a test match, but it was not a hardship at all.  I enjoyed it, apart from one of the sessions on the third day when seemingly nothing happened.  I came out of it with a new appreciation for test cricket, although I am never going to be much of a fan.  J, being a cricket fan, absolutely loved the experience.

Even if you have no idea what cricket is, if you are in the West Indies when a cricket match is going on, it is well worth the experience of going along, at least for a day.

Would you like to go to the cricket in the West Indies?  Do you travel to watch sporting matches?