The random experience of spending my birthday in Laos

20 February, 2014
This post may contain compensated links. Find more info in my disclaimer.

This week’s Flashback Friday post is inspired by the fact that it is my birthday tomorrow.  I decided I would write about the last birthday I spent overseas, the year I turned 29. We had just made it to the capital of Laos, Vientiane.  It would have to be the most random birthday I have ever have! 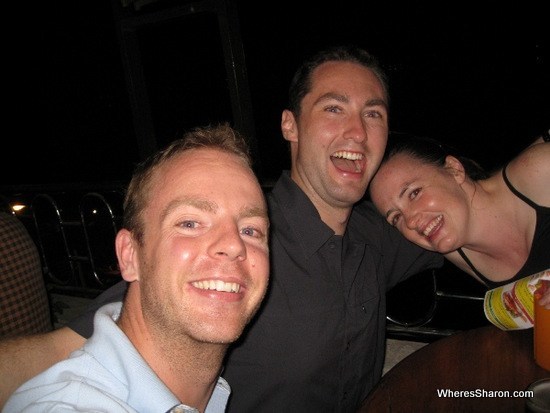 We had been on the road for a few weeks and the plan was to spend the rest of the year away.  We were on a tight budget and it was awesome to loosen the purse strings for a day and just enjoy!  Vientiane was a good place to do this with some fabulous food on offer and some random experiences to be enjoyed!  Here is how I spent my birthday on the road in Laos.

I woke up to a beautiful day in Laos.  What an exciting place to spend my birthday! I started the day by opening the birthday card I had been carrying from my grandma since I left home and by reading my birthday email.  After some included breakfast, J and I checked out a local market.  We enjoyed the walk.

On the way back, I had to stop for massages.  What would a birthday be in South East Asia without them?!  I treated myself to 1.5 hours of heavenly rubbing.

We met up with our mate, Blake, who had joined us for this special occasion.  We had a fantastic meal and tried some dark Beer Lao.  Not bad!   We did a little bit of shopping before a nap.

The afternoon started perfectly with some cheesecake birthday cake and some New Zealand white wine. This was followed up with an amusing phone conversation with my youngest sister.  To quote, “Are you 29? Oh my god, I’m not even fifteen and you’re nearly thirty, JE-SUS CHRIST!”  She certainly doesn’t hold back what she’s thinking! 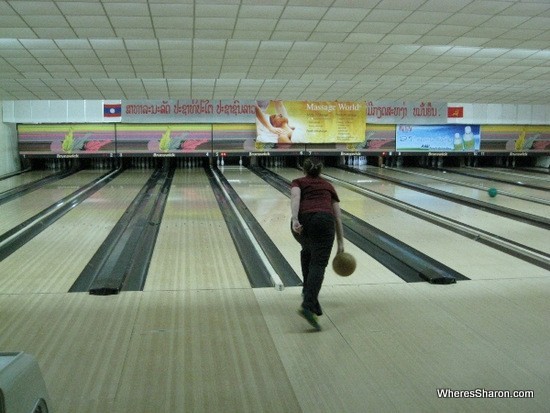 So what can you do next if you are celebrating a birthday in Vientiane?  Go ten pin bowling of course.

We headed to a local bowling alley which was totally random but surprisingly enjoyable.  I quite like bowling and it has happy memories of my dad and my childhood associated with it. It was ridiculously cheap and we could drink more Beer Lao while we played. I even played the best game of my life. 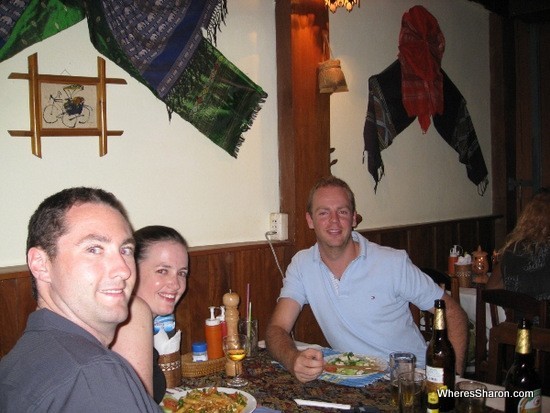 We ate dinner at one of Vientiane’s excellent French restaurants.  I had read in our guidebook that Vientiane had excellent food on offer and it didn’t disappoint.  I ate a great three course meal complete with French wine.  It was probably the best birthday meal I have ever had.  I was a very happy backpacker!

Next stop was some drinks at an outside bar on the Mekong before heading back to a bar we had visited the night before.  We were very happy when we found beer towers this time!

Blake, J and I have a bit of an obsession with beer towers after having lots of fun drinking them in Bangkok.  There was no question that’s what we would be ordering, and we had an awesome time drinking and playing with our beer tower.  We even had some free entertainment from one of the bar girls when she lost her temper with a lady boy who had been trying to chat up her husband!

We were sad when the bar shut at 11:30pm.  After talking to our hotel reception, we ended up heading off in a tuk tuk to a Vientiane night club.  This was quite the experience! 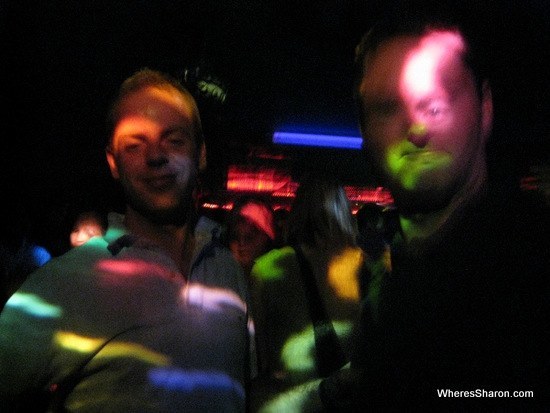 The night club was a total meat market, but it was not me who had to worry.  The women were the aggressive ones in this bar and they were all over Blake and J.  It was quite hilarious.  J even had a lady boy grinding on him, despite the fact that I was right there.

It all had to come to an end eventually, and we finally headed back to our hotel on a tuk tuk.  We were hungry and Blake amused us when he kept asking the tuk tuk driver to “take us to half a chicken”.  Unfortunately, everything was shut.

It was an absolutely fabulous birthday and a very memorable one.  Who wouldn’t want to spend their day having massages, bowling, eating French food, drinking beer towers and watching a lady boy grind onto their boyfriend?!  Unfortunately, I don’t think my birthday tomorrow is going to be anywhere near as memorable although I am very much looking forward to attending the White Night festival here in Melbourne.

It was also an excellent way to end our adventures in Laos – a country we loved exploring.  The next day we headed onto Vietnam.

My next Flashback Friday post is from later on during this trip when we attended a test match in West Indies!!

You can also read about my 27th birthday in Mexico – the amazing day that I visited my sponsor child.