I’ve decided to take a break from blogging about our awesome US and Caribbean family trip to write about an event far closer to home – the White Night Melbourne festival.  I thought Melbourne already had a dazzling array of events and festivals, but I think White Night is set to become the granddaddy of them all!! 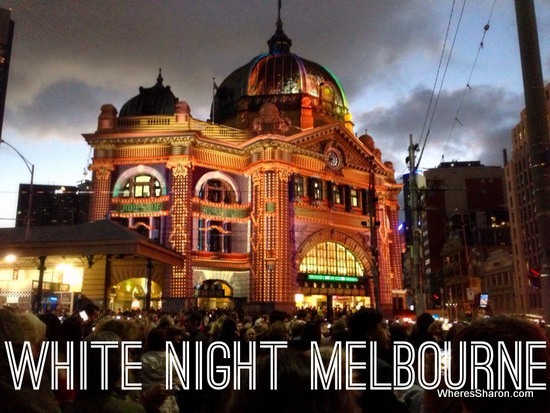 I had somehow not heard of this festival until this year.  A friend suggested I attend as it actually took place on my birthday.  The festival is only a year old, but even in its first year, it attracted about 300,000 people.  It was set to be bigger and better this year and I think it achieved its goals.

After starting in Paris, White Night is actually a festival held in over twenty cities around the world.  The idea is that the city is alive for 12 hours overnight – 7am to 7pm.  It is a celebration of Melbourne’s passions – art, music, theatre, sport, food, fashion, design, performance and film.  It all adds up to one massive, awesome and quite random event. 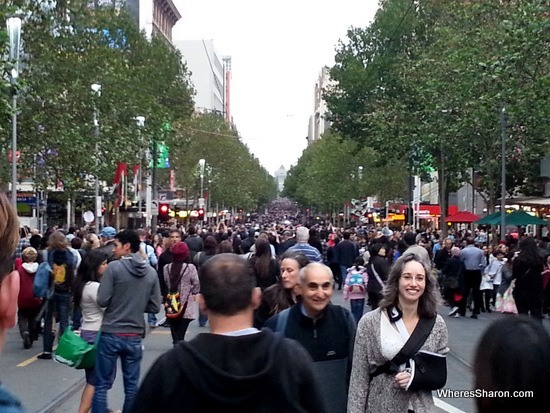 We were at Federation Square when Flinders St Station (see above) and other buildings along Flinders St lit up.  They looked unreal and that was an experience in itself! 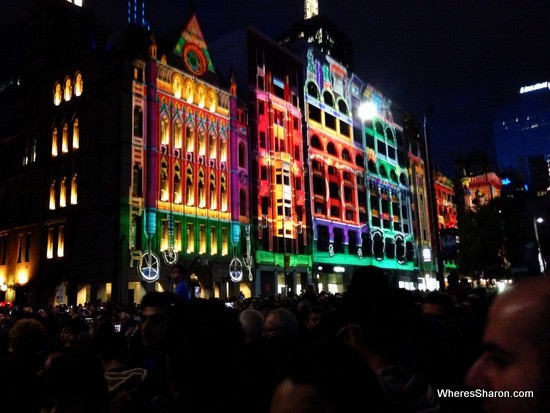 The crowds in this part of the festival were massive, so we moved just a block away to Russell Street where there was still plenty to see and do, but it wasn’t quite as busy.  We found criss crossing back and forth across Swanston Street easier than walking along it, and we still came across many many attractions.

Melbourne CBD’s growing lane way culture was on full display with many attractions being located in lane ways.  We came across so many as we walked along.  There were art installations, music, films.  It was amazing. 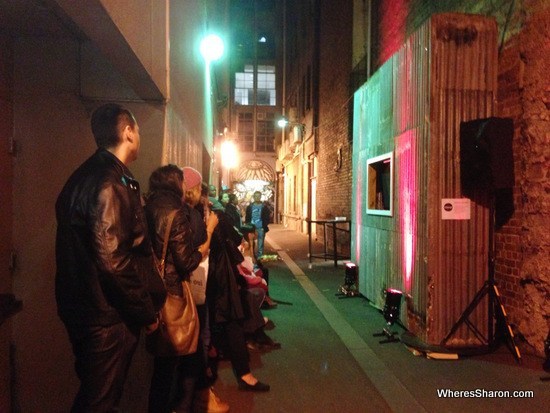 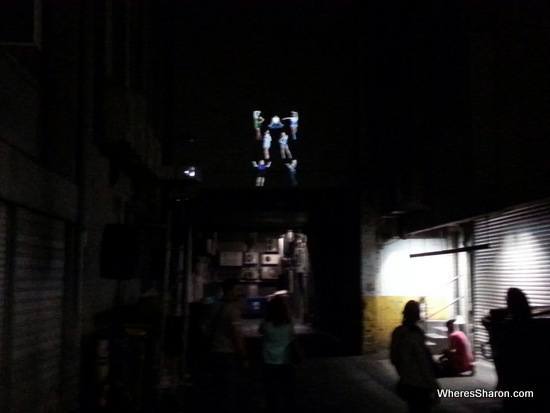 One of many lane way exhibits – very random

There were bigger attractions too and live music.  We actually never made it to the main music stage, but I’m sure it was great.  We went in a church that was meant to have 200 real skulls.  I felt a bit ripped off when it was only a painting of skulls, but they were freaky, being displayed in the front of a church with a scary “soundscape” playing. 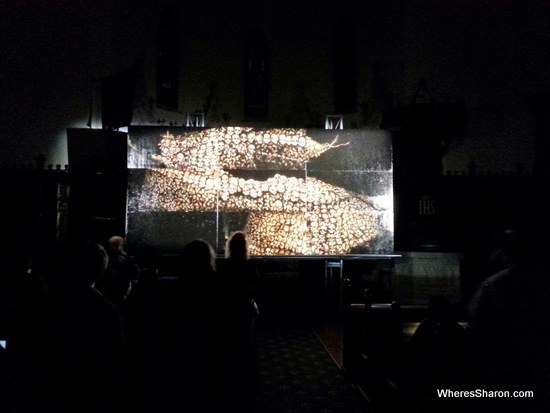 There is a comprehensive website of all the attractions at White Night Melbourne.  If you are keen to see certain events and attractions, this is worth checking out.  I, quite frankly, found all the zillions of options confusing, so we settled for just wandering around which worked well for us.  We constantly seemed to be stumbling on something.  They were well signposted with the name of the attraction and a description. 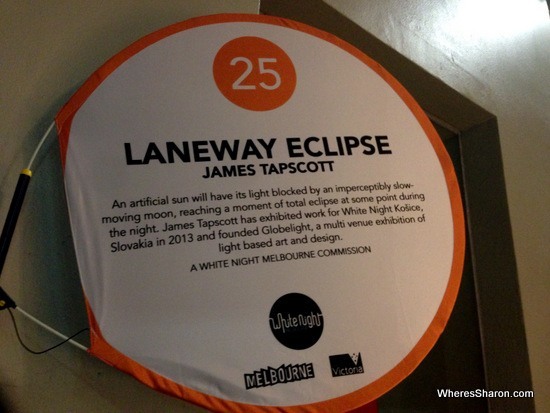 One of the many attraction signs

Drinking isn’t a big part of the festival.  In fact, you are not allowed to drink in the streets.  If you are feeling thirsty, we  found it surprisingly easy to visit bars along the way.  There is also lots of food available.

The only shame? That it only runs for one night.  We are not up for an all nighter with our little kids, so this means we only saw a slice of what was on offer.  There are just so many different attractions that make up this festival.

White Night Melbourne is already being called Melbourne’s Carnival and I can see why.  It was quite simply brilliant.  We loved it.  For anyone looking for a very interesting, different event in Australia full of Melbourne’s character, this is the one to go to!

If you would like to read more about the attractions and events at White Night Melbourne, check out the Age’s live coverage.  You can also read about more events and festivals in Melbourne.

Should I bring the kids?

White Night Melbourne markets itself for families and there were many families there, including many with young kids such as ours.  We did not bring our kids, and I would not want to.  They would not cope with the large crowds and there wasn’t really that much in it for them.  For older kids, it would no doubt be an excellent experience and in fact, when I went to work on the Monday, there were a couple of year 7 kids that I teach who were raving about their experience at White Night.

Practical Information
White Night Melbourne is held in Melbourne’s CBD.  The area it covers is massive and centred along Swanston Street, Federation Square and the Victoria Arts Center.  Catching public transportation is advised and it runs all night. We had no problems catching trains in and out, although they were quite crowded.  Many streets are shut for the event

Did you go to White Night Melbourne?  I would love to hear your experiences.