Our first views of Puerto Madryn were on our walk from the bus station to the hostel. I don’t know what I expected of Puerto Madryn, but it wasn’t what I saw.   We weren’t in Puerto Madryn for the weather or the beach. We were there to see Southern Right Whales, among other animals. There are several reserves near Puerto Madryn which are popular for their wildlife. We were lucky enough to be here during whale season and were planning to do a tour to see them. 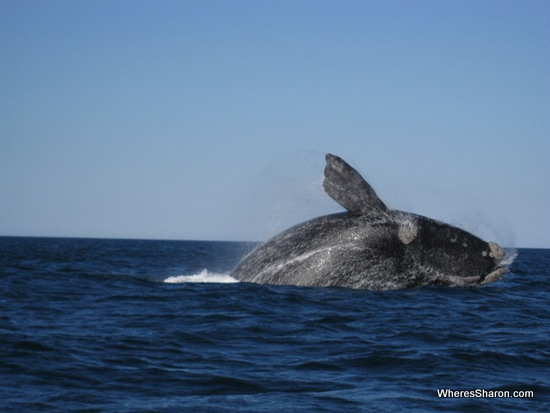 We enjoyed our walk through the town.  Everything seemed new and very pleasant. It was like visiting a town on the Sunshine coast back home. It was all low level and the main parts were lining the beach. In summer it’s a beach destination, in winter it’s too cold for that, but it was the most pleasant weather we have had in awhile. Sunny blue skies, warm sun, great tshirt and jean weather, not something we expected this far south. It seems kind of wrong to have good weather, in winter, in Patagonia. 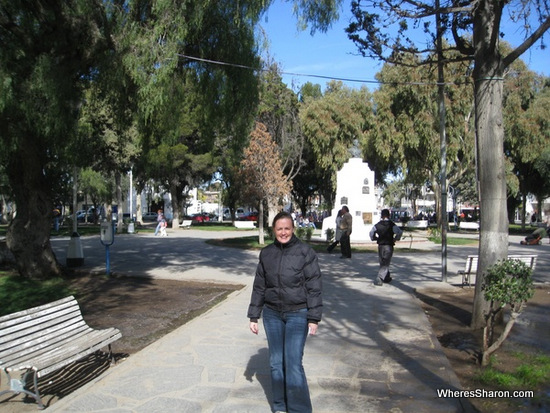 After a rest and a shower, we booked a tour to Peninsula Valdes for the next day to see the whales and the wildlife and then headed out to see more of Puerto Madryn. Our earlier impressions were solidified. Nice, pleasant beach town. We didn’t really see much to do and not that much seemed to be happening but there were plenty of nice looking bars and restaurants. For dinner we tried something new and Josh cooked for us in the hostel kitchen. It was very good and actually more relaxing to take things at our own pace and not be in a restaurant for once. 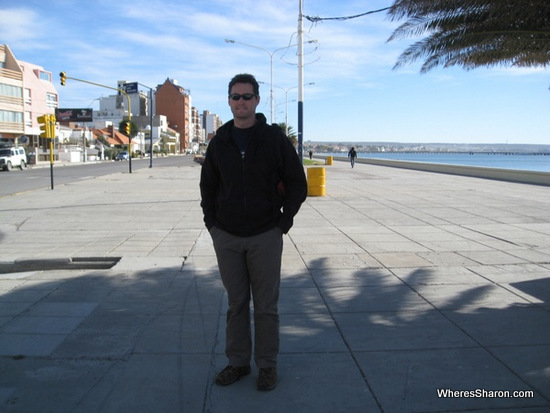 The next morning we started our tour about 8:30am. Three Irish people staying at our hostel also wanted to do the same tour and the five of us were enough to have our own private tour.

It was a bit of a drive to the peninsular; we covered about 400km over the day. The scenery going out of town was good as we drove by the water and we could see whales in the distance. After leaving the coast the scenery wasn’t interesting at all. The area is scrubby desert and apart from some animal sightings, not much to see.

We had to pay 45 pesos to enter the reserve (a lot of money). Peninsula Valdes is an oddly shaped peninsula sticking out of Argentina about half way down the Atlantic coast that you can see on any map. It’s actually about the size of Switzerland so quite a large reserve.

We started with the visitor centre. There were lots of pictures, maps, fancy computers and even a whale skeleton (they are huge). It was well set up and well looked after so our money was certainly going somewhere. Then it was onto Puerto Piramide, the only town on the peninsular. This is where we were going out on a boat to see the whales. 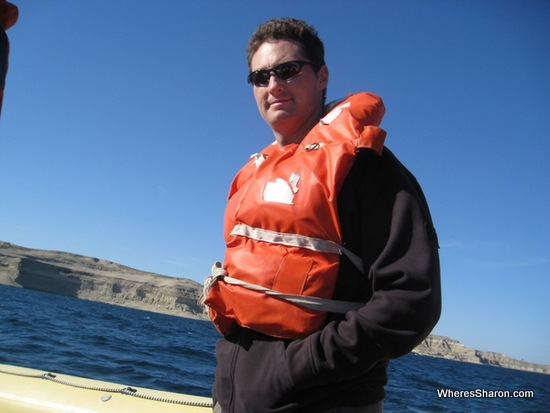 We picked up life jackets and walked onto the beach. Strangely, we all hopped on a beached boat although once we were all on, we were towed into the water. It was a reasonable sized boat, plenty big enough for the maybe 30 people that were on the cruise with us.

The scenery was pretty from the boat. The bay was ringed with big cliffs and the brilliant blue sky contrasted nicely with the stony cliffs and barren landscape.

It didn’t take long until we saw our first whale. Initially at a distance and then much closer. It was amazing. They are up to 15m long and were breaching right by us. They come to these waters as they are well protected so they can teach their babies everything they need to know.  We often saw a big adult whale come up and then a baby one right next to it. It was constant and we saw many whales. There are a couple of hundred of them in these waters that return every year. 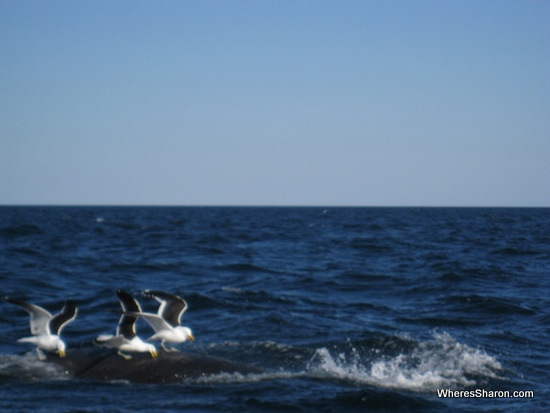 Sometimes the whales come up just to the surface and you don’t see that much of them.  Other times, they would come further up and you could see more of their bodies and size. When we were really lucky they would come right up and come crashing down like you see on TV and in all the photos. It was exhilarating to see such huge creatures, so close, performing such a task.

At one stage a whale came right up under the boat. I could see it in the water below us and then it came to the surface close enough to touch. There is really nothing like it. For such big creatures they have magnificent control of their bodies so they can do that without hitting anything. In the twenty years they have been running tours of the bay, there has never been an incident. The boat operators try to keep a respectable distance from the whales, but sometimes, like in this case, the whales are curious and come closer.

There were also many sea gulls around which were causing problems. They had started pecking at the whales whenever they came up, eating the fat under their skin. I felt very sorry for the whales while watching. They used to only eat from the skin that the whales would shed but now they have realised that it’s easy to do it from the real thing. The locals are scared it could affect the whale’s choice of this location. It was not unusual to see a whale swimming along with a whole lot of seagulls following and swooping down whenever the whale surfaced.

There was an English speaking guide on the boat which we just got to the five of us so we also got to learn a lot and ask many questions.

It truly was an amazing experience, one that would be right up there on my list. I’m usually not much of a nature person or care too much about wildlife but it really didn’t matter. I don’t think anyone could not be in awe of these massive creatures.

After the boat tour it was back in the car and onto the opposite side on the peninsular. We had lunch at a very pricey restaurant where we had to spend at least 40 pesos if we wanted to go to their private beach where there were many seals, particularly elephant seals. The food wasn’t that great and we didn’t really get much to eat for our 40+ pesos but what can you do. Thankfully, it turned out to be worth it. 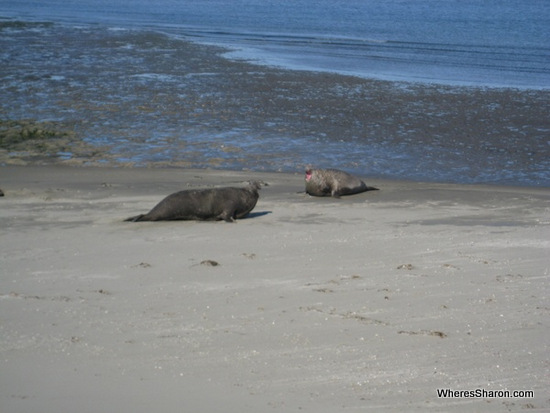 We headed down to the beach dunes and were allowed to watch the seals at a distance. They had a bilingual guide there who told us a lot about elephant seals. There were quite a few of them around, lying on the shore making very loud moaning sounds. They were very big and fat. They were lying there shedding their skins, a long process. Occasionally they would ‘fight’ – one would waddle over to another, they would ‘stand’ up and roar. Then the smaller one would move away. It was amusing.

Our last stop for the day was further up the coast. At the right time of year you can see large penguin colonies that have come up from Antarctica and there is the possibility of orcas. All we saw was a lone penguin.

It was then back to town and our hostel. We stopped a few times along the way as the guide saw Patagonian wildlife to point out, as we had all day.

The tour was fantastic. All up it was one of the more expensive things we have done on this trip, but it was so worth it. Everyone should try to see whales up close and I would certainly take up any opportunity to do this again.

Crazy dinner at the hostel

In the evening, there was a bbq at the hostel that is held weekly. It was great. When we got there, there was a huge amount of meat on the Barbie. It smelt so good! Wine was also included so we got to try a lot more Argentine red.

We had a great night. Everyone at the hostel was there and there were lots of semi drunk conversations going on. We unfortunately forgot that we can’t handle more than two drinks anymore, so we were probably more drunk than most which Joshua proved when he took to the climbing wall. It was hilarious to watch and I proved my drunkenness when I laughed every time he fell off. He had quite a few sores and bruises the next day. 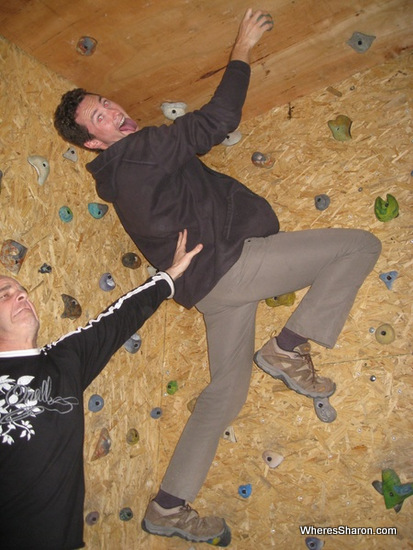 We were quite ill the next day. Fortunately or unfortunately (I’m not sure which) I had got most of the alcohol out of my system the night before, Josh woke up still a bit drunk. He wasn’t very well when it wore off.

Check out wasn’t much fun when they tried to charge us for the ensuite room we had booked despite the fact that we had a shared bathroom. We argued and they only gave us a pathetic amount off the price. Unfortunately the boss wasn’t there for us to really argue with, plus we were too ill. The worst part was that we had really liked the hostel, the tour and the dinner but now we leave with a very sour taste in our mouth. The cost of the dinner had also gone up ten pesos from when we had asked the night before. We were not happy.

It was then off to the bus station. We had a 12:48pm appointment with a 21 hour bus ride to Cordoba, our next destination. We should have gone there when we were up North before, but at that time, the itinerary we had planned meant it made more sense to go there later. Now it didn’t make any sense but we still wanted to go there so there wasn’t much choice. We comforted ourselves with the fact that it should be the last overnight bus ride of our trip.

The bus had originated somewhere else but arrived only ten minutes late. We had paid for the better class, cama, which is what we had traveled on our other overnight journeys. This hasn’t been our first choice of bus line but all we had been able to get. It was right not to be our first choice.

We did not get as much leg room as usual and even I felt my legs a bit squashed and uncomfortable. Especially since I got stuck with my bag at my feet which meant I had no choice but to have my legs on top of it – it took all my foot room. I had been a bit late getting it to the bag guy and even though he had just shut the luggage compartment, he refused to open it again! Usually when traveling this class that wouldn’t have been a problem, it would have fit under my leg rest, but not on this bus.

We didn’t get blankets or pillows as normal and were only given lunch to eat. We had been warned there wouldn’t be food so we had already eaten what our tender stomachs would allow when getting on. It is typical that the only meal provided was only one we didn’t need! The movies were slightly better though and there were stops to make up for not getting meals.

The scenery wasn’t very interesting. It was just more scrubby desert. We woke up to the outskirts of Cordoba, very excited to be getting off the bus soon!