Che and visiting the town of Alta Gracia

We started off mid morning to go to Alta Gracia, a small town an hour outside of Cordoba. Located in the sierras around Cordoba, Alta Gracia’s major claim to fame is that it is the childhood home of Ernesto ‘Che’ Guevara. One of the several homes he lived in when in the town is now a museum. As well as the museum, Alta Gracia is meant to be a pretty town in its own right. 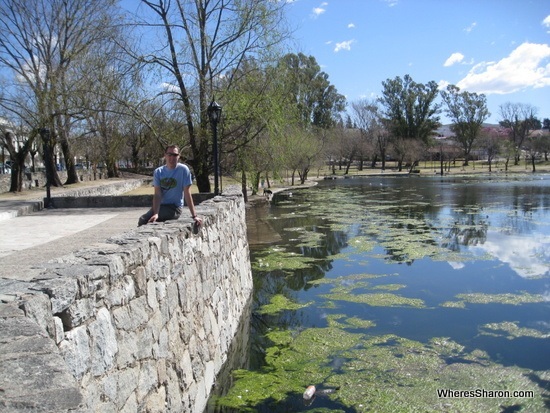 Our bus journey there wasn’t too bad although the bus terminal in Alta Gracia has moved since the guidebook, was here. We weren’t really sure where we were. Luckily there was a small tourist office bearing maps that was able to sort us out. Map in hand we set off through the quiet and shady streets of the town, and made it to the centre to have some lunch in one of the cafes lining the main road.

After lunch, we decided to wander around the centre some more. All of the shops were shutting up for the post lunch siesta so we wandered up the Iglesia Parroquial Nuesta Senora de la Mercad, a 17th century Jesuit church. The church was part of a larger Jesuit complex, most of which is now a school. The church itself was open, and we popped inside for a quick peek. It was nothing spectacular.

In the centre of town, by the clock tower, are a lake and a park, so we sat by the lake for a while and talked. The lake isn’t the most picturesque of places. It’s covered in algae and looked like it had a dead turtle in it. And there are some pretty aggressive ducks on it too, who checked us out when we went to sit by the edge.

The older part of Alta Gracia is a very nice place to wander around. As we walked to the Che museum, we passed many old colonial houses in many different states of repair. The streets are quiet too, and both Sharon and I were reminded of quiet suburban streets in inner city Melbourne; the older suburbs especially.

The Guevara family moved to Alta Gracia when young Che was just four. He was diagnosed with severe asthma early on and Alta Gracia’s higher, dry, climate was recommended. The family lived in several homes in the town, but it was the first and primary residence, Villa Beatriz, that was converted into a museum. Acquired by the city council in 2001, it was converted into a museum soon after.

The museum was quite crowded when we arrived, unsurprising as it is the number one attraction in town. We were given an English language guidebook when we bought the tickets which helped us understand things. Each room was set up to represent a chapter in Che’s life. Some of the exhibits were genuine, like the motorised pushbike Che set off on a 4000km journey around Argentina after he finished high school. Others, like the motorbike he set off on his famous motorcycle journey round the continent, were just replicas. In every room were photos from each stage of his life. 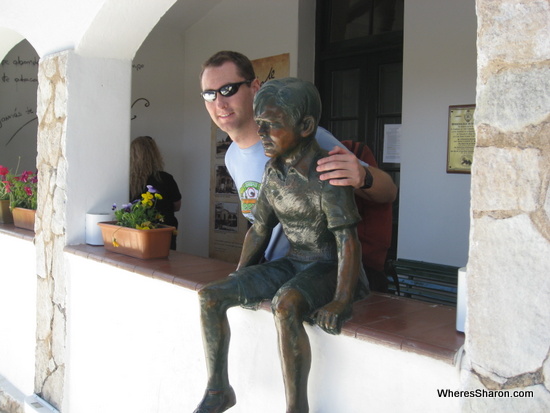 Joshua with a young Che at the Che museum

These exhibits, accompanied by letters translated in the guidebook, did a good job in telling the story of Che’s life. It showed his transformation into bearded revolutionary, at an early age. Unsurprisingly, he was very intense, as a letter to his 10 year old daughter written just before he died urging her to lead a revolutionary life attests.

Out the back were pictures of a visit a couple of years ago by Fidel Castro and Hugo Chavez. Che’s memory attracts revolutionaries old and new.  In what was Che’s family’s garden shed you can buy a Che style beret (there were no cliche t-shirts). However, it is a hard look to pull off without looking like a try hard. This contradiction between revolution and commerce aside, I found the museum very interesting and well worth a visit.

Alta Gracia is pretty but not terribly exciting. There are places to stay but unless you want to be up in the hills I think a day trip from Cordoba is plenty of time.

Read more about fabulous things to do in Cordoba.