Things to do in Amman

3 November, 2008
This post may contain compensated links. Find more info in my disclaimer.

It was another 4:15am wake up courtesy of the nearby mosque. I went back to sleep but after all the early mornings I was unable to sleep in even a little bit. Oh well, more time to see Amman! 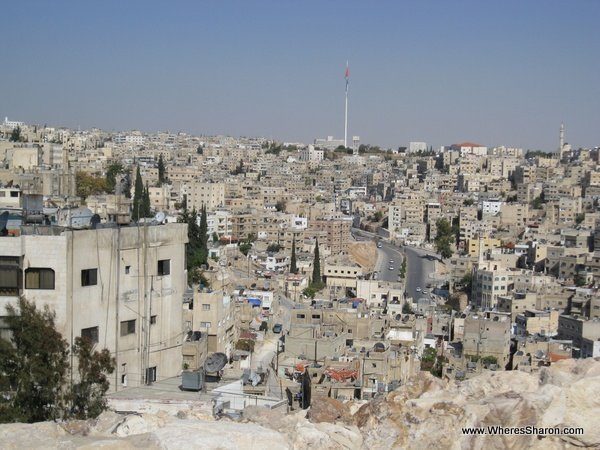 Views from the citadel of Amman

We checked out about 8:30am, had the included breakfast and then headed out to see some of the sites of Amman. We were flying out that afternoon so just had the morning free. Our guide book said that there wasn’t that much on offer in Amman and a few hours was enough for the main sites. The whole section left me a bit unexcited but as I was soon to find out, there are some cool things to do in Amman and in my opinion, only spending half a day is a shame.

We started with a taxi ride to the top of the nearby hill where the old Citadel was. We had run into the people from our Dead Sea tour at breakfast so we shared a taxi with one of them. It wasn’t far away, just up a steep hill with an indirect approach so the (very cheap) cab was the best bet. 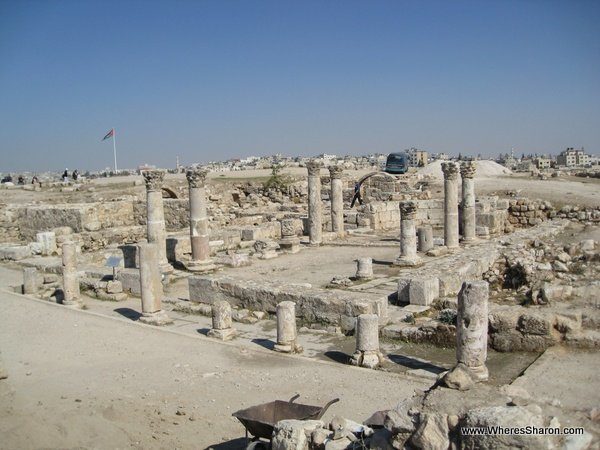 It was a great site. There are ruins dating from as far back as 80AD as well as being the site of the National Archaeological Museum which is full of treasures. To top it all off, there are great views over the city everywhere you turn. What wasn’t to like?

Well there was one thing. An America TV crew had shut off a small part of the museum. It wouldn’t have been a big deal but it was the section with Dead Sea Scrolls. We hadn’t even known that this was an attraction at the museum but we were very disappointed at not being able to see them, especially as the crew kept saying things like ‘twenty minutes more’ and ‘five minutes more’. In the end we had to give up. 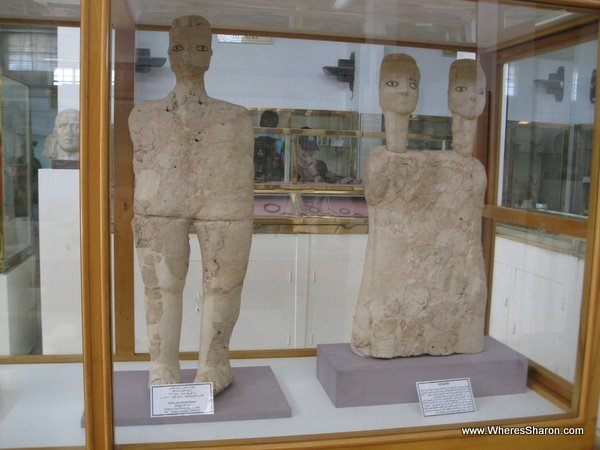 But there was some great other treasures. Many things from Stone Age man to today. It was awesome. They had a statue of a man produced probably 8500 years plus ago that is thought to be the oldest discovered. One of the photos with this entry shows statues that are thought to be from 6500BC, that’s about 8500 years ago and they weren’t in a terrible condition either. Old things like these really excite me, especially the ones that weren’t in cabinets so I could touch them. I find it amazing to think that I am touching something that someone else once touched so long ago to make it. Blows me away! 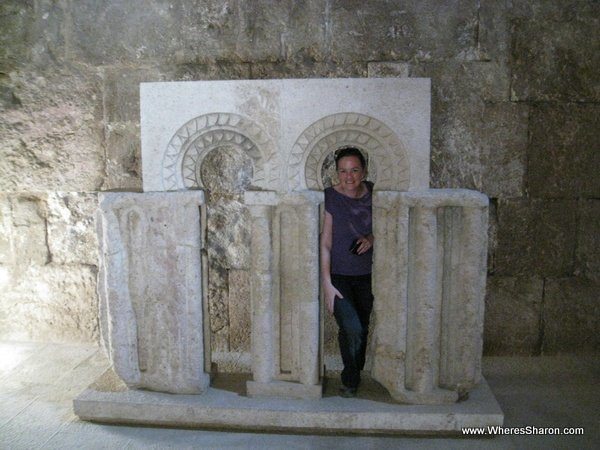 Playing at the citadel

So I loved the museum even without being able to see the Dead Sea Scrolls. The site was pretty cool too, you could wander through the ruins of an Umayyad palace dating from about 720 AD, pillars from the Temple of Hercules constructed from 80AD to 161 AD and various other sites. All very highly recommended. 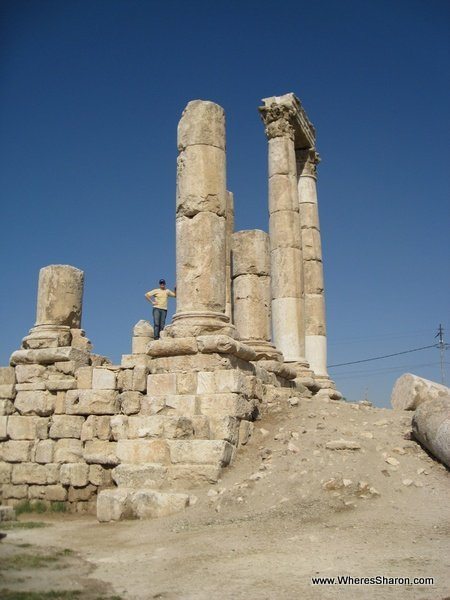 We could see our next site, the Roman Theatre, from the Citadel so we decided to walk to it, found some stairs and was a fairly short walk so wasn’t a problem. This theatre was constructed in the second century and has since been restored. It is quite a site, especially from the citadel and can hold 6000 people. Apparently in summer shows are sometimes held there which would be great. There are two museums on each side of the theatre showing traditional clothes, jewellery as well as some mosaics and well set up scenes depicting typical homes. It wasn’t incredibly interesting but something to take in all the same. 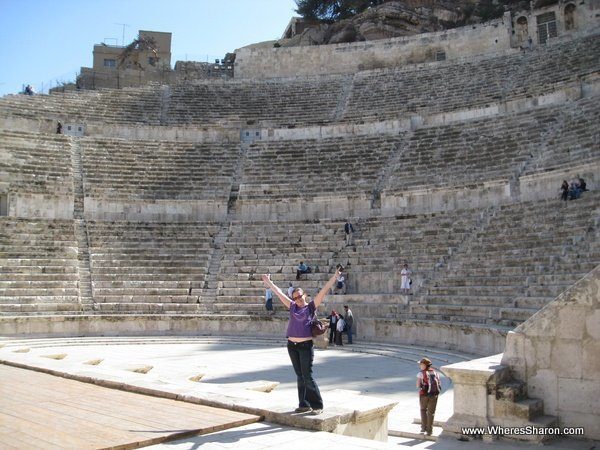 Round the area of the theatre there are also some other (much smaller) ruins of sites around in the roman times. Certainly adds some flavour to the city. We then headed back towards the hotel via a souk (market) and had a quick tasty lunch before getting a transfer to the airport. We had been lazy and organised this through the hotel. Nice and easy.

We were very disappointed to find our time in Jordan coming to the end. If we could add time to any section of our trip, I think this would have to be it. It is a fascinating country full of amazing sites and spending only three nights was doing it a great injustice. In saying that it was certainly better than nothing and Petra, the Dead Sea and the National Archaeological Museum would have to be some of our highlights from the trip. Everything is also very reasonably priced, a lot of things are very cheap and the people are friendly. I didn’t find the hassle that exists in Egypt and Turkey. People certainly bargain and might try something on, but if you catch them out, they will just give you a big smile and fix their ‘mistake’.

My only gripe would be that it is hard, as a woman, to feel completely comfortable when there are hardly any women around and those that are, are generally very well covered. Unfortunately a problem I have found with Arab countries in general and not much you can do about it. It is still definitely worth the effort and although I wasn’t by myself that much, I didn’t attract the kind of attention that I did in Egypt and Turkey which made me feel much more at ease. It also felt very safe. Any tourist site that we went to had plenty of tourist or regular police. It certainly seems like a country that takes their tourism industry seriously and it is all set up well and in a way that makes you feel comfortable and secure. Even entering and departing from tourist sites was quite hassle free and you never felt preyed upon.

So go, get yourself to Jordan! We certainly want to go back one day and it further enhances my already strong wish to see more of the Middle East. Such an amazing region.

From Amman, you can also visit Petra or the Dead Sea.

Amman airport was not too exciting. We checked in with no dramas and there was some free wifi to pass the time as well as a reasonable selection of shops. As sad as we were to be leaving Jordan it was exciting to think we were heading back to Bangkok. Our trip had come full circle. We are both happy to be returning home this week (not that that concept actually seems real – this week, surely not) and although our trip has been awesome, we are tired out and ready for our own bed again.

We were flying Etihad via Abu Dhabi (in the United Arab Emirates). The whole thing from taking off in Amman to landing in Bangkok was meant to take only ten hours including transit time. Took about an hour longer though when our connecting flight in Abu Dhabi was delayed. It was annoying when we were lining up to go through the security scanners they had at each gate with many other people and they were doing final boarding call – give us a break!

As for Etihad Airlines, they get excellent reviews and have won quite a few awards. Their start up story and how quickly they have grown is quite amazing. Since they will soon be flying to Melbourne and have some great deals, I might go into a bit more detail about what I thought than I usually would. Stop reading now, if you don’t care.

I have mixed feelings about them. Overall good and would happily fly them again but they just let themselves down on a few areas. Our first flight to Abu Dhabi was pretty good, lots of leg room, most I think I may have seen in economy. I could get out of my seat without the person on the aisle having to do anything more than squish his legs to the side and I wouldn’t touch him. Bad point was that they ran out of one of the menu options very early on and there was no entertainment whatsoever. I got a lactose free meal and it was pretty crap compared to the main meal except it did include a whole heap of fresh fruit which was a bit impressive.

On the second flight there was nowhere near as much leg space, it was back to what you might get on Qantas or other full service airlines. My meal was a bit better this time but I didn’t like that the flight attendant was sick and sniffling everywhere. Gross. My biggest gripe though was how they handled the timetabling of events on the plane. It was only a six hour overnight flight and for some reason they didn’t feed us until the middle of the flight and they didn’t turn off the lights until after this point. I don’t think we even got two hours with the lights off before the sun was up. Partly because of this, we didn’t sleep at all. Josh also had trouble with how the seat reclines. The bottom part of the seat would come forward as the back went back, which was great for someone of my size, much more comfortable. But Josh’s legs are too long for him to be able to push the seat back as there would be no room for his legs.

I’ve no idea why they fed us so late (would have been after 4am at the destination – usually meal times adapt to the destination once on board) and this would discourage me from flying with them again, especially on a flight with a similar timing. Abu Dhabi airport was overcrowded. Had thought it might be something spectacular but it wasn’t.

Entertainment system was great on the second flight. Although Josh’s stopped working at one point and that’s when we found out the service wasn’t that good. No one answered the call button. At the end of the day though, I would fly them again. These days with so many budget airlines around, any full service airlines get some points from me and they do price themselves similarly to a budget airline.

Che and visiting the town of Alta Gracia