13 April, 2009
This post may contain compensated links. Find more info in my disclaimer.

We had decided to spend the Easter break over in Tasmania. For once, though, we weren’t flying into Hobart to see family or even going there so we’d have a chance to explore some of the state that I haven’t really seen. 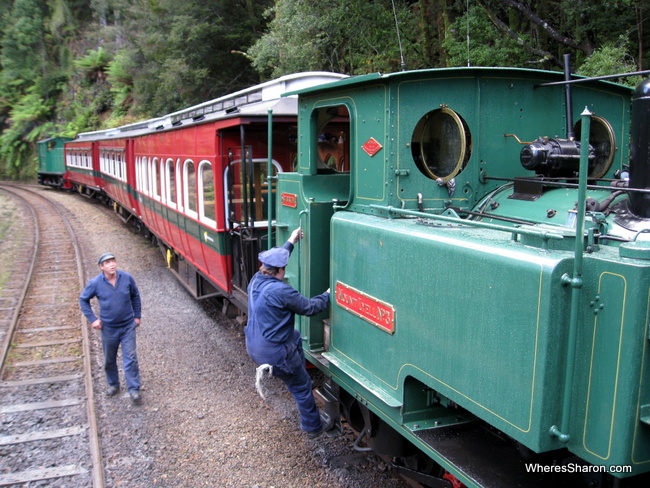 Travelling between Strahan and Queenstown on the West Coast Wilderness Railway

When I was a kid, the West coast of the state wasn’t much of a tourist destination. That has changed now though and West Coast Tasmania vacations are more common. Its big business and even over in Melbourne I had seen many images of that part of the state and had wanted to visit for awhile. I’d also had my grandfather raving about the ABT railway and I wanted to see it for myself.

We flew into Launceston on Good Friday morning and headed straight into a hire car and drove towards Cradle Mountain. It was quite a nice drive, hardly saw any cars and towards the end we started seeing the spectacular central Tasmanian scenery. 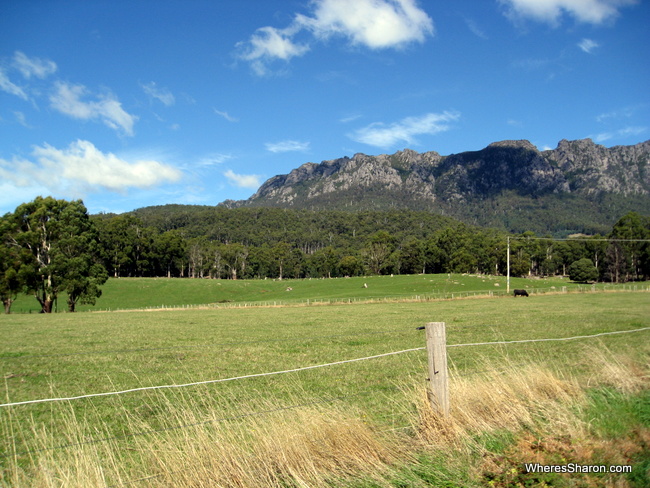 Views on the way to Cradle Mountain

We were disappointed when we arrived at the Cradle Mountain car park. You park a bit away from Dove Lake and there is a shuttle to take you in. They didn’t seem to know when the next shuttle would be and there were so many people waiting… We still had a couple of hours to drive so in the end decided to give it a miss. We didn’t really have the time to wait around.

So we drove on. They certainly aren’t kidding when they talk about the ‘west coast wilderness’. We hardly saw any sign of humankind. Trees everywhere! I’m always quick to recommend the East coast when people are going to Tassie for short periods but it would be a toss up for me now. If you really want to feel like you’re in the middle of nowhere, the West coast is definitely the way to go! 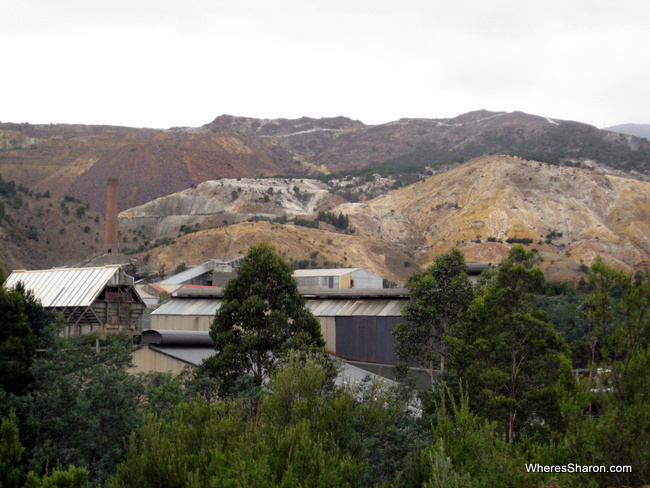 I went to Queenstown when I was a kid and my vague recollection of it turned out to be spot on. The ruined hills from the mining soon came into view. They quickly disappeared as well as we made our way to Strahan, where we would be staying for two busy nights.

We were soon at the unit that we would be staying in. It was just gorgeous. I was surprised how nice as Strahan is not cheap and this was the cheapest place I could find. It even came with a spa! We decided to cook our own dinner to make the most of it and get a DVD. A lovely night in.

The next morning, Josh drove us to the railway station to take the ‘West Coast Wilderness’ railway. Josh didn’t know how to drive a manual and since we might have to buy one, it seemed a good time to learn. We got to the station in one piece and collected our tickets. We had the posh class ones; Josh had upgraded us as a birthday present for me. The station was very cute and so was the train when we hopped in. We were lucky enough to get the back seats so had extra good views. 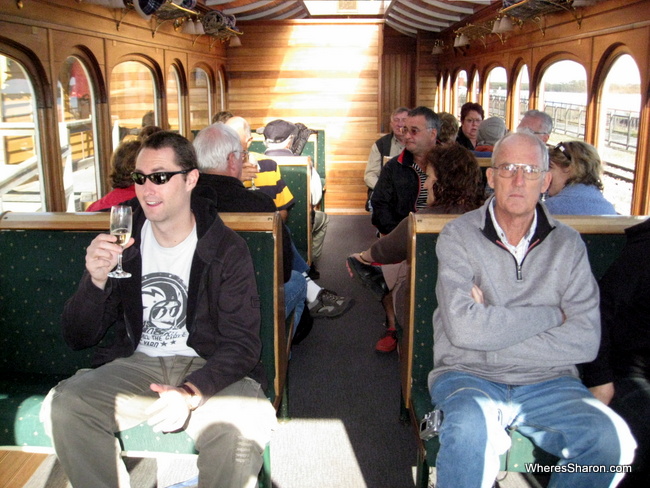 The whole railway journey was awesome with stunning views. The train runs from Strahan to Queenstown. The posh class was just as awesome! Lots of nice cheeses, other fancy snacks and an open bar. Had some delicious Tasmanian wines. Lunch was awesome as well. Poshest lunch box I have ever had. Delicious! 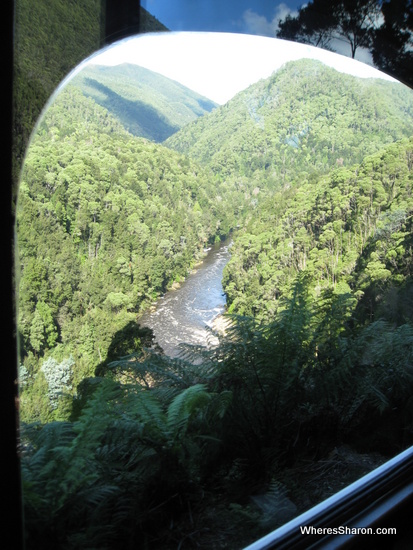 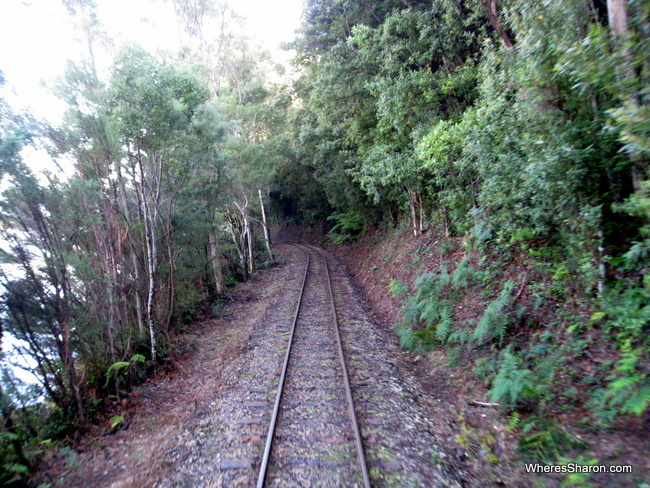 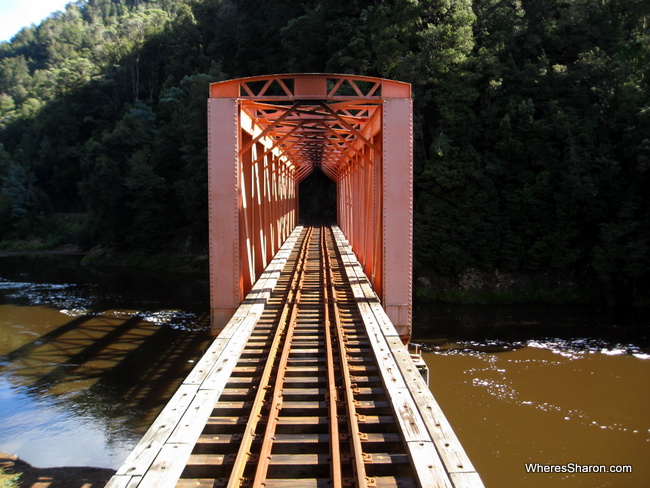 The train makes a few stops where you can get out and explore the surrounding scenery. One stop, we were able to try some interesting honeys as well. Mixed with things like chocolate! At lunch time, everyone swaps trains to one that has come from Queenstown. 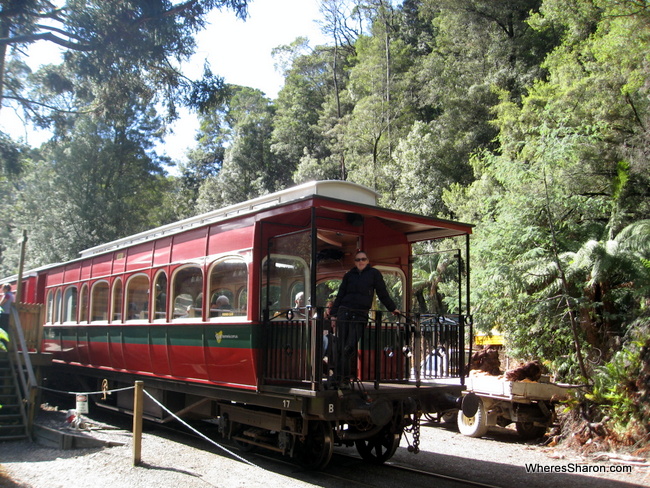 It was a sad moment when we arrived in Queenstown and had to depart the train. We bought some souvenirs including some books so I could keep to my pledge about learning more about Australia’s history.

A bus took us back to our car in Strahan. The roads are very winding so it was slow going. We had a bit of a disaster on the drive back to the hotel, something happened to the clutch in the car. The car made a constant sound and we couldn’t go into third gear! So we spent awhile trying to work out what to do with car company and had a visit from a local mechanic.

Initially it seemed the mechanic would drive us back to Launceston the next day. A few phone calls later it was sorted out that they would tow us a car from the closest rental place which was three hours away! This would happen the next day so we put up with the car for the evening. Not much of a hardship as cute Strahan is quite small. 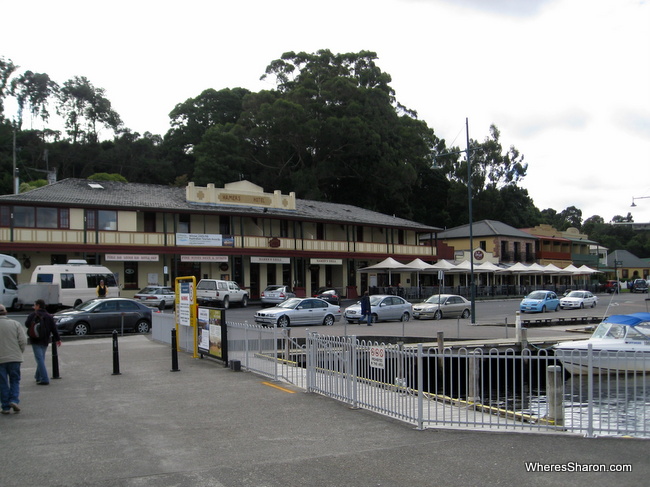 We went out for dinner in town. It was good stuff! We didn’t take our time though as I wanted to see the end of the footy. I was very happy to see the bombers just beat yucky Carlton. Yay!

The next morning we were off to a catamaran for a Gordon River cruise. If we thought the scenery had been stunning the night before, it only got more stunning. I can highly recommend this cruise as well. It was awesome with an awesome lunch. They also had some great reading material so we could learn more about the area while we were cruising. 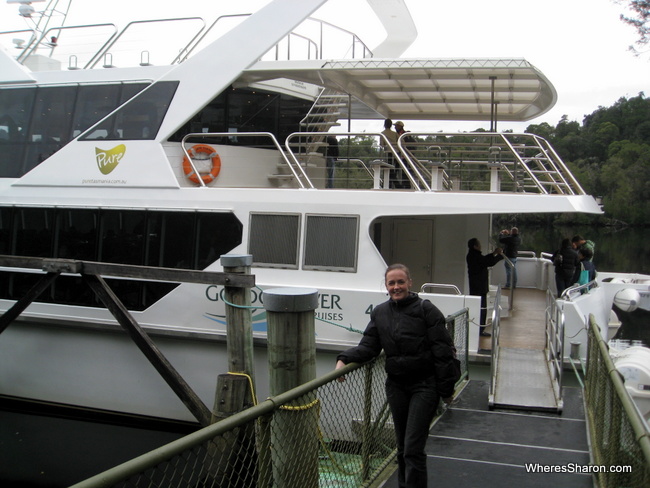 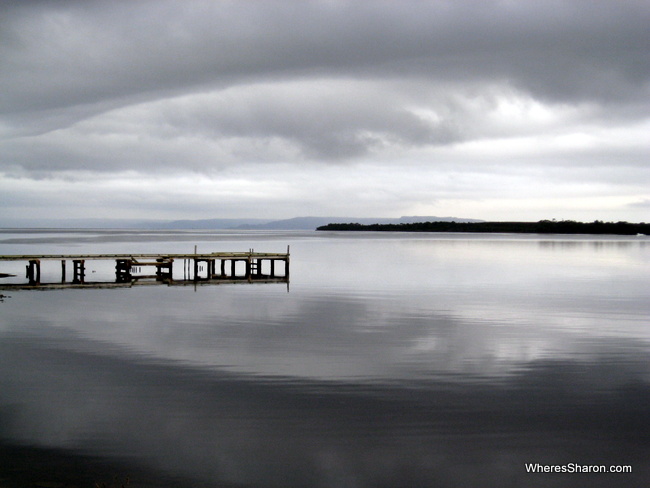 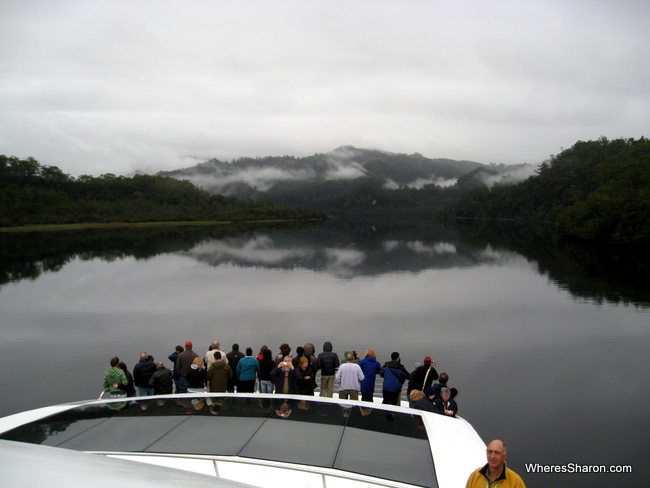 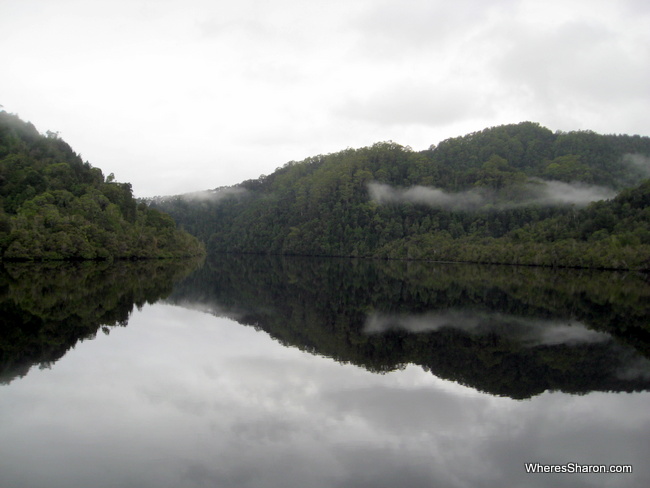 We got off at Sarah Island and had a tour of the ruins of the old penal settlement. It really must have been a horrible place to be sent. 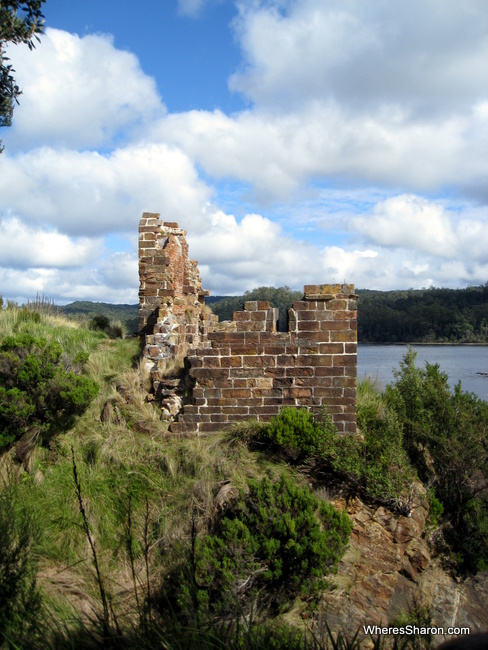 Unfortunately, after the cruise it was back to our unit where fortunately a new car awaited us. Then we drove back to Launceston in preparation for our early flight the next morning. We went via the north west coast this time and it was a pretty uneventful drive. 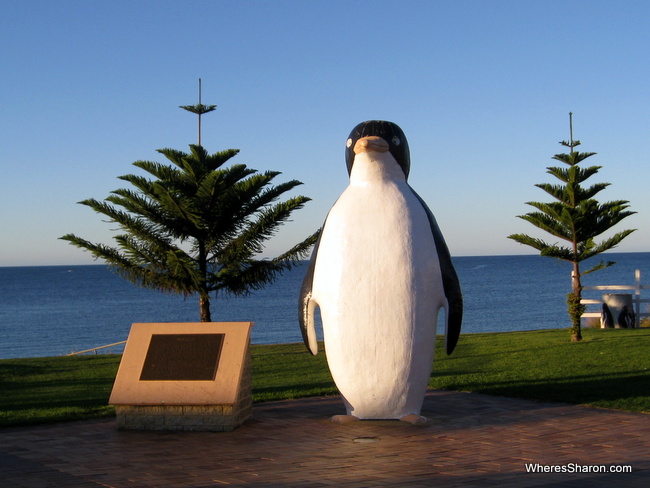 It was dark when we got to Launceston and checked into our hotel. We went out for a walk and had some dinner. That was about it for our Easter break.

It was a short break but very worthwhile. We liked the West Coast very much and highly recommend a trip here to everyone. The scenery was stunning; the railway and boat trips awesome. We loved it all!

Read more about visiting Tasmania in our guides to visiting Southern Tasmania and the North, West and East of the state. You can also read our popular guide to Hobart with kids.

Need more inspiration? Check out my guide to the top 25 things to see in Tasmania – the ultimate bucket list! Many of the attractions in this article made it to the list!

Practical Information
We flew into Launceston, it was quite expensive because of Easter, we paid about $80 each way. We hired a car for about $40 a day (thanks Entertainment book!) and stayed Kitty’s Place in a spa unit for about $110 a night (which was an absolute bargain, Strahan isnt cheap!). The cruise was around $110 for a window seat and the railway was about $200 for ‘premier class’