This entry will primarily be a review of my experiences of travelling on a relative newcomer to Australian skies, Air Asia X. With flights starting at AUD$99 from Melbourne to Kuala Lumpur, it is easy to be curious just how good the airline is! Along with my 15 year old brother (hereafter referred to as The Runt), I have just had the $99 experience as well as an onward less than $10 experience to Kota Kinabalu (in Borneo). These are my thoughts!

We checked in online which was definitely a good thing. When we arrived at the airport, over two hours early for the flight, there was a long line. Having already checked in online though, we were straight to the front. They checked our travel documents (including our itinerary so make sure you keep it), took our bag and soon enough we were going through immigration. I was wondering if there would be any questions about my relationship to The Runt, but there wasn’t and we were soon waiting for the flight.

Boarding started about 40 minutes beforehand. We took our time getting on. I was worried how much space we would have. I had been told that the seats wouldn’t go back and there is an extra seat squished in each aisle compared to Jetstar. Both these things were true. The seats did look extra narrow, although not too bad. Space between the rows seemed about normal. It was pretty full until we got to our seats at the back. Lots of spares. The Runt sat in one across from our two as no one was occupying any of the three in the middle. We got lucky and I ended up with a set of two to myself and he had a set of three.

The plane seems all new inside and quite pleasant. There’s seat back entertainment although you have to pay RM30 or AUD$15 for it. all prices on the plane (except the hot meals for some reason) are in Malaysian Ringit although they accept aussie dollars. Would recommend changing some money into ringgit before boarding as, although prices are quite cheap still for food and drink (especially compared to Jetstar or Virgin Blue), the exchange rate on the plane isn’t that great, so you could save some money by exchanging enough money for the flight first. I was happy with the prices though. Three 500mL bottle of water set me back $5 in total.

The hot meal was not long after take off. We had pre-ordered which made things nice and easy. They didn’t look like much though, were quite small and the taste wasn’t that great either. I was a bit disappointed as looking forward very much to some Malaysian food and this didn’t cut it. Had a chuckle to myself when I read the label and saw it was produced just round the corner from where I live. Not very exotic! Still, ok for $8 and came with a drink.

I couldn’t fault the service. It was superb. Everyone greeted and did a little bow to us as we hopped on the plane and someone even showed us to our seats!! 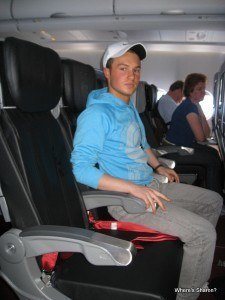 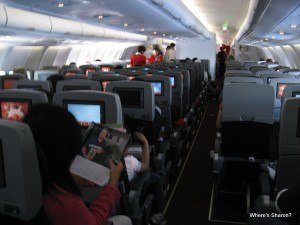 The flight was pleasant. I would highly recommend shelling out and paying for your seat. If you do this, definitely pick one towards the back. We picked one of the few 2 seaters by the window, this was nice. By these seats there is extra corridor space too. As a side note, if you don’t pay to select your seat, you also don’t get to pick your seat when you check in online. It seems to just pick the next available seat from the front (found this out when we checked in online for our second flight which we didn’t pay to chose seats for).

We landed in KL pretty much on time. After immigration and getting our bags, it was onto check in for our next flight onto Kota Kinabalu in the state of Sabah, Borneo. We had bought this seat for an extra $10! Not bad for another 2.5 hours!! We were taking a bit of a risk though. Air Asia doesn’t allow you to check through so you have to collect your bags and then check in again. We had three hours between our flights but then this sometimes isn’t very long as you have to go through immigration twice, collect bags and check in again. If your first flight is running late then you could be in trouble. Obviously they don’t take any responsibility for you meeting your onward flight.

But anyway no drama for us, it was all very easy. Quite a few places to eat at that at the LCC terminal in KL too. Ate and then went through to our gate to wait for our connecting flight.

It was a bit late and the domestic terminal was a bit disorganised. All ok though. Our seats on this flight were just in front of the emergency exit row which was a bit annoying as we couldn’t put our seats back. Which was annoying after the first flight being like that too. Plus we were both quite exhausted by this point. At least this flight was a lot shorter though as soon we were coming into Kota Kinabalu!

So yeah all up, Air Asia X was fine and I cant believe how cheap it was! Definitely recommend although I wouldn’t pay as much as for other airlines simply because you don’t get as much space. But if looking at flights to Asia and comparing prices it is also worth taking into account that all the extras were a lot cheaper on Air Asia than its budget airline competitors.

Practical Information
Melbourne – KL about 8.5 hours. $99! + $10 per bag. Kuala Lumpur – Kota Kinabalu 2.5 hours $9 + a couple of dollars for a bag. Food and drinks were very cheap on this second flight, cheaper than the first.