About ten years ago, I travelled to Peru as part of a bigger round the world trip. A big question on my mind before that trip was whether to hike the Inca Trail to Macchu Picchu or not. 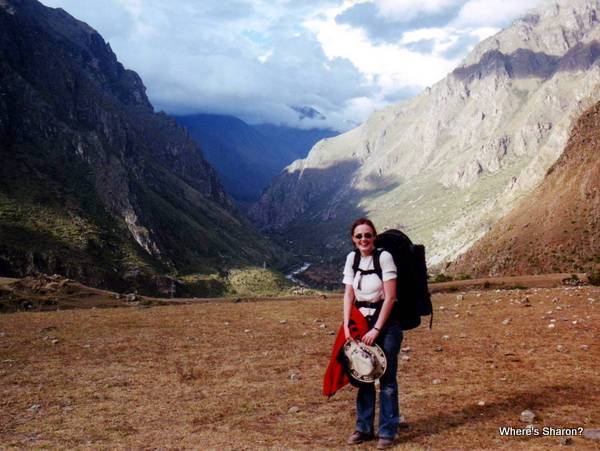 Beautiful scenery during the Inca Trail

The Inca Trail probably needs no introduction to most of you.  It is one of the most famous treks in the world.  It is generally completed as a 4 day hike to Macchu Picchu. It is 43km long and provides great scenery of the Andes, as well as Incan ruins, along the way.

I didn’t know anyone who had done it, so I did a lot of internet research.  I knew I liked hiking, but I also knew I hated camping.  I hated not having a shower, and pretty much everything to do with camping trips.  I was worried I would regret it if I didn’t do it, and that I would miss something special.  The consensus online seemed to be that arriving at Macchu Picchu would not be the same unless you had spent the four days hiking to get there.  With hindsight, I have to agree.  It would not be the same arriving there after catching the train.  I think it would be a million times better!

Initially, despite all the comments online about what I would be missing out on if I didn’t hike the Inca Trail, I decided it wasn’t for me.  I really didn’t want to camp and be smelly and dirty.  But then I arrived in Cusco, and it was fabulous.  Everyone seemed to be doing the Inca Trail and I got caught up in the buzz.  I would do it too!

Back then, it was not nearly as popular as it is now, and there was no need to book beforehand.  You could turn up at Cusco and have your choice of days and tour operators.  My travelling companion and I booked a tour and left two days later.  I was very excited!

My experiences hiking the Inca Trail

Not surprisingly, it was hard work.  If you haven’t hiked at high altitudes before, I’m not sure anything can prepare you.  I had no problems with altitude sickness or anything, but the altitude definitely does take it out of you while hiking.  On the second day, we hiked to the highest point, Dead Woman’s Pass.  At 4200km above sea level, this was really hard.  Every step was an effort.  To try and explain how tough it is, picture this. Even when I only had a couple of steps to go to reach the top, I would have to stop and rest every step.  This was especially annoying as it was so cold that every time I stopped, I had to put my jacket back on.  I would get so hot with the step, that it would go off again.  On and off… it drove me crazy.  I hope that helps illustrate how hard it is.  And I was fit and young, and towards the front of the group hiking the Inca Trail at all times. 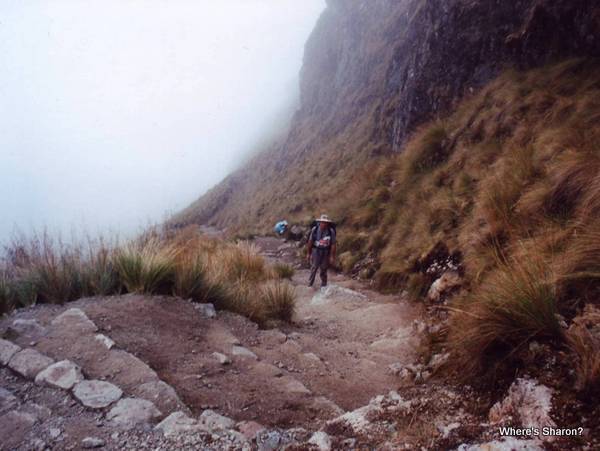 It wasn’t just the uphill that was hard either, the downhill was not much better and my knees certainly paid for it.

Dead woman’s pass may have been the hardest part, but there were other ascents which rivaled it.  The guide must have thought it was encouraging to keep saying how easy everything would be, and how the next day was so much easier and flatter, but this honestly didn’t help.  The first part of the third day was as hard as the second.  On the third day, things did get better though, in that we actually saw some Incan ruins!

I had been under the impression that we would see ruins throughout the Inca Trail, but that just wasn’t the case.  It was cool to walk through actual Incan ruins as part of the trail, although it would have been more enjoyable if I hadn’t felt like I was about to die! 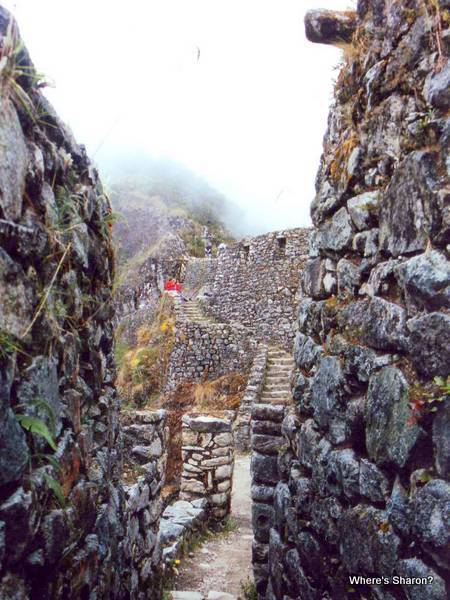 Ruins on the Inca Trail

The third night was quite enjoyable – we stopped at actual buildings with a hall, restaurant and bar and had an end of trail celebration.  Although the night was fun, this is part of the reason why I did not enjoy Macchu Picchu.  We were told it was the end of the trail, just a flat two hour easy walk the next morning.  I really wish they had set expectations appropriately.

The next morning was, quite frankly, hell.  We had to get up at 4am to be there in time for “daybreak”.  Despite the tour being sold with descriptions of seeing Macchu Picchu at sunrise, this is actually not possible, as sunrise only occurs at certain times during the year, thanks to all the big Andean mountains.  The whole thing was a bit of a farce, as it took us far more than two hours to get there, so we missed daybreak anyway.  The walk was horrible.  One section was like a 10 metre high wall we all had to climb up!

We finally got to the look out point, late, exhausted, and with fog covering all of Macchu Picchu anyway.  What was the point of getting up at 4am anyway?!  I was angry, bitter and incredibly sore.  Well as much as I could be between massive breaths and wanting to collapse.  I still would have been exhausted, but not as much if they hadn’t got us up so early, and I certainly wouldn’t have been in such a bad mood if they hadn’t lied to us about the day’s hike.

We hiked down the final bit of the trail to Macchu Picchu.  I was too tired to care.  I didn’t even have a sense of triumph of having arrived.  It did look amazing though and was bigger than I imagined. 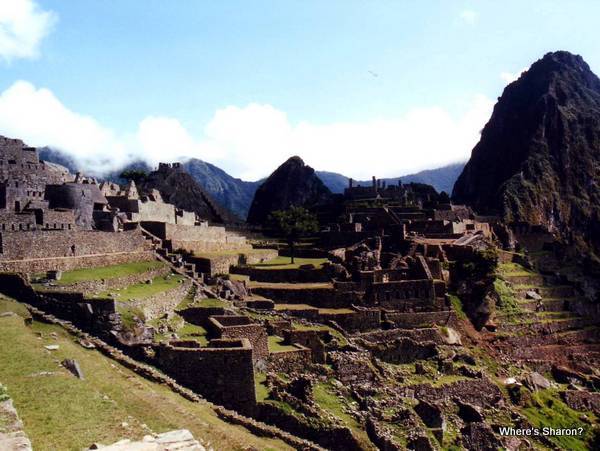 Macchu Picchu! I was so happy to get here, but only because the Inca Trail was over.

We had a tour of the site which just annoyed me further.  I was too exhausted to listen. I didn’t want to climb around and I opted out of walking to another viewpoint.  I thought back to all the reviews I had read which said that you were basically an idiot if you didn’t arrive at Macchu Picchu via the 4 day hike, and I hated them.  I felt they had stolen from me what should have been a great experience – that of exploring Macchu Picchu.

My thoughts on hiking the Inca Trail

So, that’s my experiences of hiking the Inca Trail to Macchu Picchu. It was not all bad. The scenery was awesome.  It was definitely a different experience, and I do have stories to tell thanks to it!  The porters were absolutely amazing, and I couldn’t have done it without them.  On the second (hardest) day, one of them actually strapped a woman to his back and walked her up!  He was fast too, and she was as big as him!

Would I do it again? Hell no.  Was it the right decision for me to do it? I don’t think so.  I am glad I did it, but really only so I can say I did which I always think is a bad reason to do something.

Should you hike the Inca Trail to Machhu Picchu?

Completely up to you.  I don’t want you to think that I am saying don’t do the Inca Trail – by all means do it. It is an amazing and unique adventure! I’m sure many people love it, and I can see why.  Just go into it with your eyes open and if you are similar to me and it’s not really your thing, perhaps consider not doing it.   I wrote this blog post to give a different perspective on something that is usually raved about. I don’t think you are missing out if you don’t do it, you are just having a different experience.

Something I do highly recommend is staying an extra night or two in Aguas Calientes, the closest town, at the end.  That way you can go back to Macchu Picchu the next day, and not end up in my situation, where I feel like I didn’t actually get to experience Macchu Picchu.  It looked like a nice town, so that wouldn’t be a hardship anyway.  I would also strongly recommend hiring a sleeping bag in Cusco if yours isn’t 100% up to the job.  That is something I regret.  I froze on the second night in my sleeping bag which was only rated to 0 degrees.

Another suggestion is to think about the two day trek.  I thought if I did that I would miss out on seeing ruins, but we didn’t see them until day 3 anyway.  There is also meant to be a two day version now where you don’t camp!  Now that I might enjoy.

Next week, I am going to write about all the dramas I had on my first flight on my first round the world trip. For everyone who has heard me say that I won’t fly Singapore Airlines, you are about to learn why!

Have you walked the Inca Trail?  Do you want to?