The amazing experience of paragliding in La Cumbre, Argentina

I have always wanted to try paragliding, especially after my amazing experience hang gliding in Rio de Janeiro. The town of La Cumbre, just outside of Cordoba, is great place to do it. Hostels and tour agencies in Cordoba can set it up without the need to be in the town itself. 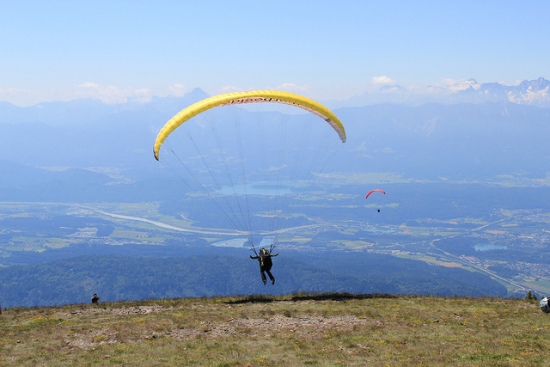 Getting to paragliding in La Cumbre

La Cumbre is two hours away and I had to be there early, so it was a very early start. I managed to catch up some sleep on the local bus to La Cumbre and was met at the bus terminal on arrival by Pedro, my tandem paragliding partner.  The booking agency will tell you which bus to take and tells the paragliding people in La Cumbre when you should get to town.

Compared to the hang gliding in Rio, Paragliding in La Cumbre is not as structured. I was driven to ‘La Rampa,’ the hill launching pad 8kms out of town. There wasn’t much there, just a piece of cloth attached to a stake as a windsock, an old disused ramp, and a gentle slope towards a cliff, the launching ramp. I had appreciated Ruy, my Rio hang glider’s stress management techniques and coaching; Pedro’s approach was much more low key. He strapped me up and then told me to run when he gave the signal. There was no practice.

We had to wait for a stronger wind to take off, but I got to watch one of the others (there were only three groups) take off. When the wind caught the parachute the people attached were lifted up without even needing to run. I was nervous about having to run off a cliff so I quite liked the idea of a standing takeoff.

The wind finally changed and Pedro unfurled his parachute. Someone else had a final check of my equipment as we waited for the wind to catch it. All of a sudden Pedro gave the signal! I began to run but the parachute had fully deployed and started to drag us backwards before our feet left the ground. I sat back into the harness (which is like a seat and very comfortable) as we rose over the cliff.

Paragliding in La Cumbre is quite different to hang-gliding. With hang gliding you have much more control as you descend to earth. With paragliding you can control which way you are facing but you don’t have the same momentum; you float with the winds. The valley outside La Cumbre we were floating over is home to a strong thermal giving massive lift, so we didn’t just float, but rose as well. We slowly gained height and circled the ramp.

I wish I had taken my camera with me (I’d decided not to risk it) as the photos would have been great. The landscape was dry but hilly, and no Rio de Janerio, but it was a great backdrop. The further we rose the more it seemed like I was higher than everything else around me. The paraglider was very maneuverable too. Pedro put it and my stomach through their paces with some tight turns and loops amongst a few negative-g maneuvers. When not doing these, it felt like we were floating or sailing gently along; different to the flying sensation of the hang gliding.

A tip for anyone who is doing it: take gloves if you can. It is cold and the hands are very exposed. Mine were freezing by the end.

We glided for half an hour, carried upwards by the strong thermal. By the time Pedro decided we were to land (which was a relief as my hands were numb) his altimeter showed we were 300 metres above our jump off point at La Rampa. For some reason Pedro decided not to land in the designated landing area, but rather near the ramp itself. The winds ruled out making a landing on the ground itself so we came to land safely in a field of cows nearby.

This is one of many activities we did during our time in Cordoba.  Check out more in seven fabulous things to do in Cordoba.