Lying on the Equator in Macapa, Brazil

28 June, 2008
This post may contain compensated links. Find more info in my disclaimer.

For us, Macapa had two main attractions: the Amazon and the equator. The equator runs through Macapa, and we were up early to go check out a monument to mark this.  It is not every day that you can stand in both hemispheres at once! 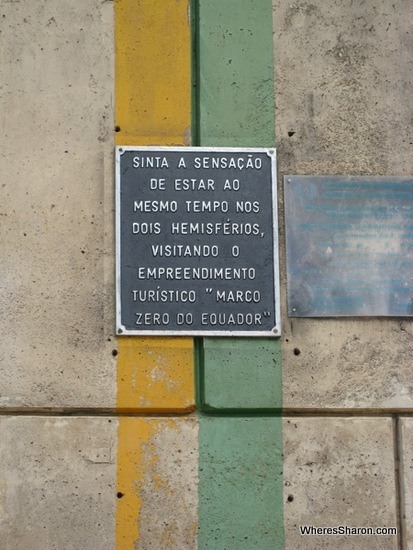 Monument to mark the Equator

First though, was breakfast. Breakfast was included which meant that for once we were up early enough to eat it and didn’t have to be cheap so we got to eat a lot. It was quite a good buffet. Lots of fresh tropical fruit, rolls, pastries, cheese, ham, sausages, eggs and some other stuff that we’re not really sure what it was. As well as some nice freshly squeezed orange juice. Got to be happy with that.

We caught a bus without too many problems as it was about 6 kilometers from the center of town. It was an interesting ride; we got to see more of Macapa. Suburbia seemed quite pleasant. It was not neat and orderly like suburbs in Australia but for this part of the world it seemed quite nice. There were some slightly overgrown parks every now and again and everybody seemed reasonably happy. The vibe in Brazil is excellent and makes everything seem good. 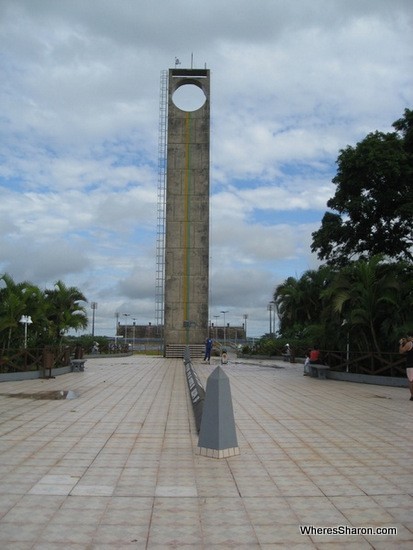 Monument to mark the
Equator

The monument has a sambadrome and stadium next to it, so this made it easy for us to work out when to get off the bus. The actual monument was a huge obelisk with a line painted down the middle to mark where the equator is. There was also a long wooden marker on the ground to mark it further. We enjoyed this as it meant we could lay and sit on the equator. We posed for quite a few photos. On the roundabout that went around the monument, there were also signs telling drivers when they had entered each of the hemispheres. 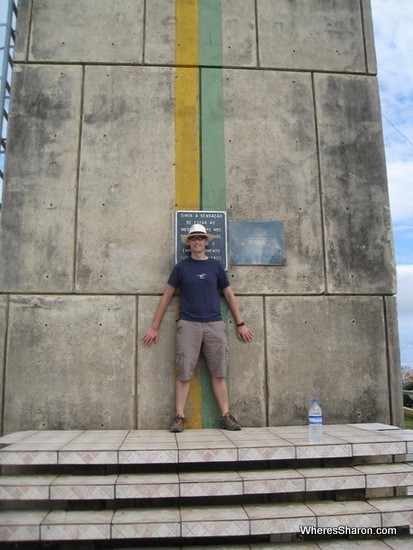 Standing in both hemispheres 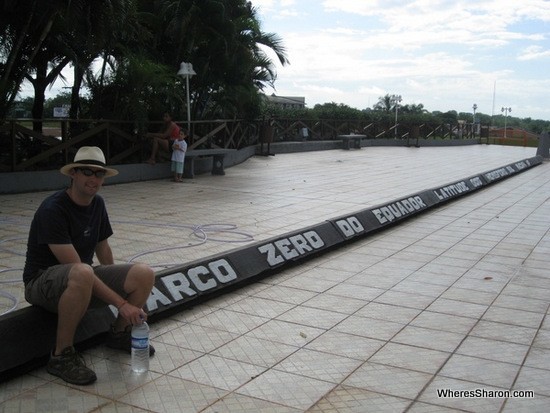 Sitting on the equator 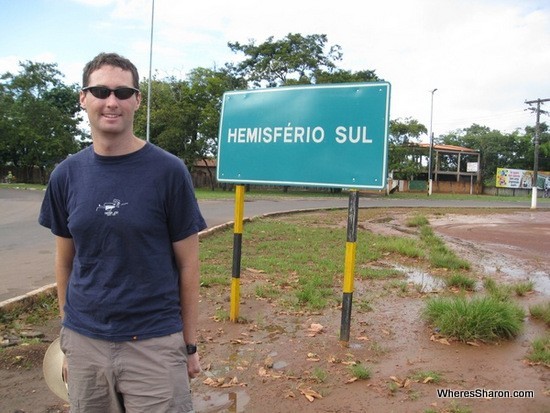 It was then back on a bus to our hotel. Unfortunately, we only had one night in Macapa and we were flying out that afternoon. So we relaxed a bit and cooled down in the room (as you can imagine it’s quite humid here although no worse than where we just were) before checking out. We then walked round the town a bit more and relaxed in the shade by the river.

For lunch we tried one of the many per kilo restaurants that exist in Brazil. Basically there is a buffet (in this case lots of salad and meat dishes) and you put whatever you want on your plate. They then weigh it and charge you based on the weight. It was quite cheap and we had plenty to eat (and healthier foods than usual) for about $10 between us.

Flying on to Belem

We caught a taxi back to the airport. It’s a small one. We had no problems checking in for our flight with Gol, a budget Brazilian airline. We had purchased the ticket online.

Macapa is only connected by road to the North to French Guiana. To get to the rest of Brazil you either have to fly or go via boat on the Amazon. Going via the Amazon to Belem, our next destination, takes 24+ hours. We were tempted as it sounds cool but in practice I think it would be quite uncomfortable, and we would get sick of it pretty quick. The boats are pretty basic and you take on your own hammock to sleep in. We also don’t really have the time to muck around finding a boat and the time to get to Belem as we need to be in Rio in a week. Rio is on the other side of the country so we have to be as quick as we can. It’s also not all that much more money to fly by the time you get a ticket and buy a hammock anyway.

So we checked in and went through to the small departure lounge. It had some of the most comfortable seats I have experienced in an airport but it didn’t have windows out to the tarmac which was kind of annoying as we couldn’t see what was going on (and couldn’t understand the announcements). We were sad to be leaving Macapa as we liked it and would have liked longer but we were also excited to be going on to Belem. We’re loving Brazil already and it is refreshing to be somewhere different. The Guianas and the Caribbean seemed a bit flat to us, and it’s nice to be somewhere that seems so much more alive.

Our flight ended up being delayed nearly two hours which was quite annoying mainly because it meant getting to Belem when it was getting dark. It was another flight that was going to multiple destinations. Belem, being only 35 minute flight, was the first stop. Belem is also near the mouth of the Amazon but on the southern side. It is the biggest port on the Amazon with 1.4 million people and flying in gave us a bit of a shock to see such a big city again. It has been awhile.

The rest of the flight was also pleasant, we had a good view over the entire mouth of the Amazon and Ilha do Marajo, a giant island bigger than Switzerland, that lies there. 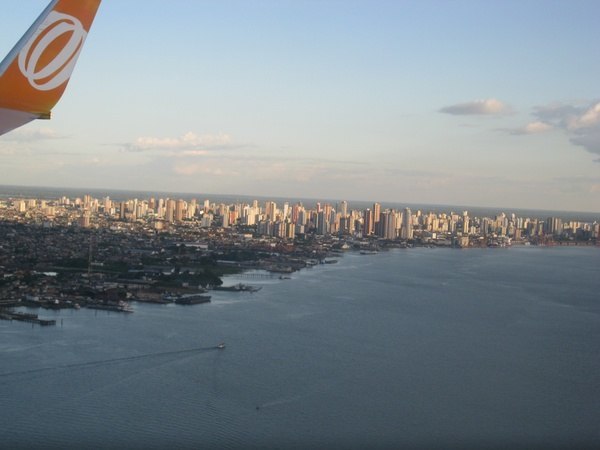 Belem and the Amazon River from the air

We were excited to be in Belem!