Museo Infantil Trampolin or the Trampoline Children’s Museum (I’m not sure why it is called this, there are no trampolines) was a must visit attraction for us in Santo Domingo after the wonderful children’s museums in the USA.  We stumbled upon this one accidentally – we walked in there thinking it was the fort!  We vowed to come back. 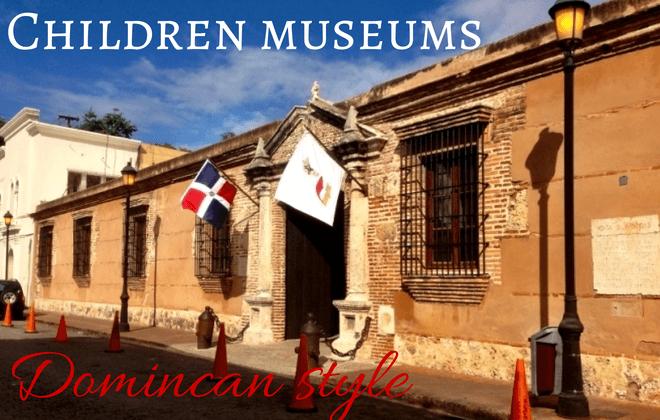 It took us a couple of days to finally visit Museo Infantil Trampolin after we turned up on the Friday only to find it shut.  Thankfully, our next visit was rewarded with an open museum.

The staff only speak Spanish and we could only visit the museum on a tour.  We were told that we would have to translate for the children.  I was concerned that we had to do a tour – we were hoping it would be like the US children’s museums where there is a lot to play with.  I wasn’t concerned about translating as I knew my one and three year olds would not be up for listening anyway.

We still bought the tickets. S would have been outraged if we had left.  Plus, we had nothing better to do and had walked over thirty minutes in the heat to get there for the second time.  We waited ten minutes for our tour in a room with computers set up for kids and children’s books.  The kids mucked around and I worked on my Spanish by looking at the kids’ books.

The tour started soon enough and it was just us.  It is an interesting way to run a museum.  We were basically shepherded through rooms while different guides explained some aspect to us.

Our tour at the Museo Infantil Trampolin started with learning about the universe and the stars, then went on to dinosaurs before we learned about stone age man.  We then learned more about the earth, animals and the human body.  Well actually, we didn’t learn anything at all since our Spanish isn’t that great.  The parts that I understood I already know, and the kids, strangely,  weren’t up for learning about tectonic plates. 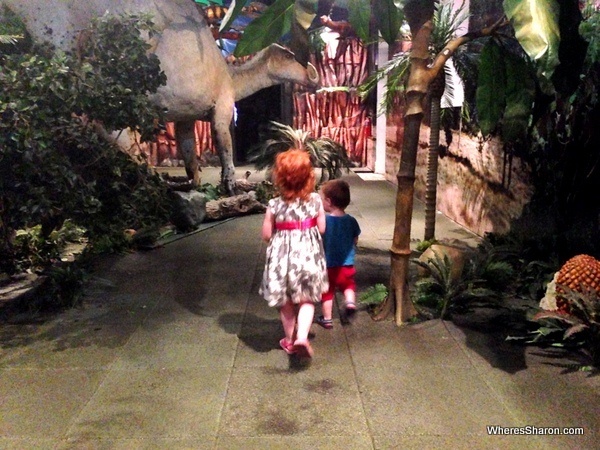 Anyway, they had things to make it more interesting – giant dinosaurs which excited the kids until the guide played this massive roaring sound that scared them senseless.  Actually loud sounds were a feature of our visit.  Many of the rooms had a very loud sound track that terrified Z and was sometimes scary for S too.  The kids screaming and terrified did not make the guides turn down the sounds either.  They seemed to enjoy their reactions.

The Museo Infantil Trampolin had a platform which we stood on and had an earthquake simulated for us.  It thoroughly terrified Z as well – it would have been nice to get a warning to hold him! 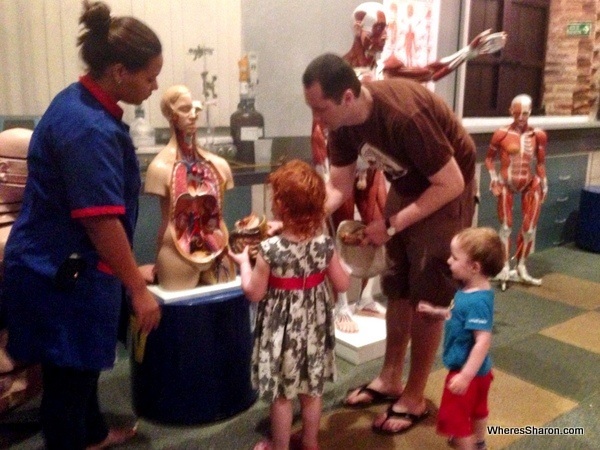 S did like the body displays.  There were replica people with all the organs ready to pull out.  That part fascinated her and I think she did actually learn something with this display.  There was also a fake aquarium full of fish (fake fish with no water).  Z liked this, perhaps more than a real aquarium since the fish weren’t moving around scaring him.

The final room was perhaps the best for us, although ruined initially by the ridiculously loud music they put on.  There was hopscotch, hula hoops, drums and other instruments for the kids to play, they could try on masks and there was a whole row of little pretend shops and other buildings to play in.  They were simple, but our young kids loved them.  We played schools in the school, went to church, sold fruit and vegetables and had a tea party.  Given how little we paid to come here, that last room probably would have been worth the entry cost in itself. 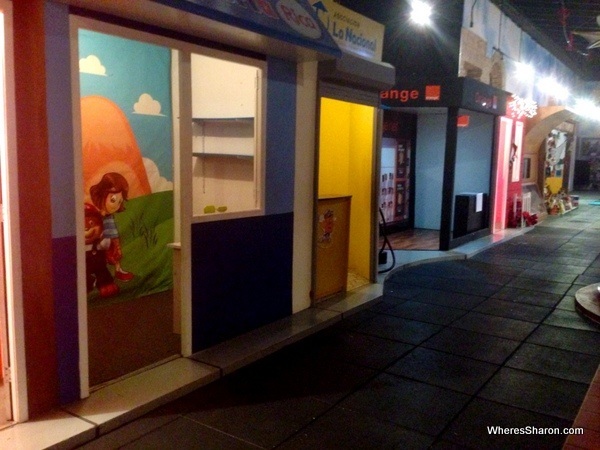 All in all, we did enjoy our visit here.  It wasn’t exactly what we expected, and I would have preferred to not have the tour.  In hindsight, we should have told the guides not to bother with the explanations.  We didn’t understand much, and we weren’t interested anyway.  I think they could see our disinterest and spoke faster to get it out of the way which gave us even less chance of understanding them.  This would be a far more suitable attraction for older kids who speak Spanish.  However, it still had enough of interest, the kids didn’t get bored and it was enjoyable enough for us as well. So, given the cheap price tag, I would recommend it to other families.  Just have the right expectations.

Read more about things to do in Santo Domingo.

Practical Information
Museo Infantil Trampolin is next to the fort in Santo Domingo.  The total cost for 2 adults and 1 child was 220 pesos (about $5.50).  Our 1 year old was free.

Have you ever had to do a tour at a childrens/science museum before?