Travelling by bus from Santo Domingo to Cabarete, Sosua or Puerto Plata

We were splitting the majority of our time in the Dominican Republic between Santo Domingo and Cabarete, a beach town on the Northern Coast of the Domincan Republic, near the city of Puerto Plata.

It is not possible to travel from Santo Domingo to Cabarete directly by bus, you have to take a bus to Puerto Plata or Sosua instead.  These destinations are both very popular as well.  If you are going there, you can follow these steps apart from the last one.

We caught the bus from Santo Domingo to Sosua since it was the closest place to Cabarete.  This is actually about the longest bus ride you can take within the DR, but it is still relatively short (5 hours) and painless.  Here are the details of our adventure!!

Step 1: Get to a bus terminal

Unfortunately, there is not just one bus terminal in Santo Domingo, so you need to go to the one for the bus line you need to take.  We took a bus with Caribe, so we went to their terminal.

We went to the terminal a couple of days earlier to sort everything out.  Unfortunately, you can’t buy a ticket in advance – you have to just turn up on the day – so there is no reason to this.  They told us a schedule which wasn’t correct either.  I am not sure there even is a proper set one as it didn’t keep to the one on their website either.

We caught a taxi to the terminal from our apartment in Gazcue.  It costs 200 pesos after some bargaining and took about 15 minutes.

Step 2: Buy a bus ticket and find your bus

This is perhaps the worst step as it is a very busy terminal and it wasn’t clear what was going on.  Maybe this was because it was the 23rd of December and people were going home for Christmas, I am not sure.

Buying the ticket is straight forward.  There is a ticket booth for each destination.  There were some long lines at some of them though, so give yourself plenty of time.  The tickets are not for a specific bus. They will put a time on the ticket, but it doesn’t mean anything. 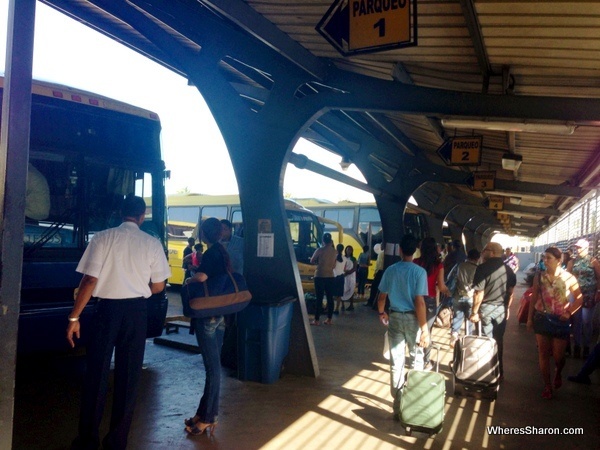 Next, there is a small waiting area and the buses.  There are announcements over the PA about boarding buses, but we found them unintelligible.  I kept walking back and forth to see if I could find the bus, while J stood with the kids and the bags.  One of the buses had a very long line and no destination.  After we had been there ten minutes, suddenly it had a destination – Santiago, Puerto Plata and Sosua, of course!  We got in the line, but the bus was full right as we got to the start of the line!

It was very annoying, especially as a couple of people had squished in front of us.  There was no communication by the staff.  We didn’t know whether to keep waiting there or not.  We took some comfort by the fact that there were many people lined up behind us who stayed in the line.

Eventually a bus employee walked past and all those Spanish lessons paid off when I asked him if I was in the right place, and he led me over to where the next bus would be.  The rest of the line followed us, so I guess it was confusing to locals too. 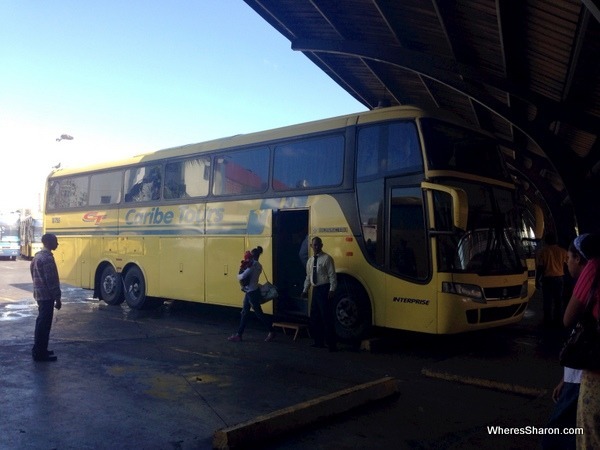 Soon enough, there was another bus.  It turned out we were lucky to not get on the last bus, as we got on first and got the front row, well three seats of the front row as Z sat on J.  Our bags were tagged and we were given the other end of the tag, and we made ourselves comfortable on the bus.  Our bus left about a half hour after the previous one, not the hour we had been told.

The easiest step!  We were on one of the longest bus rides in the country at 5 hours, but it was smooth and quick.  There were a few stops on the way, mostly very fast but the bus stopped for about ten minutes in both of the Santiago stops and in Puerto Plata.  The bus was only full to Santiago, and then we had a seat for Z. 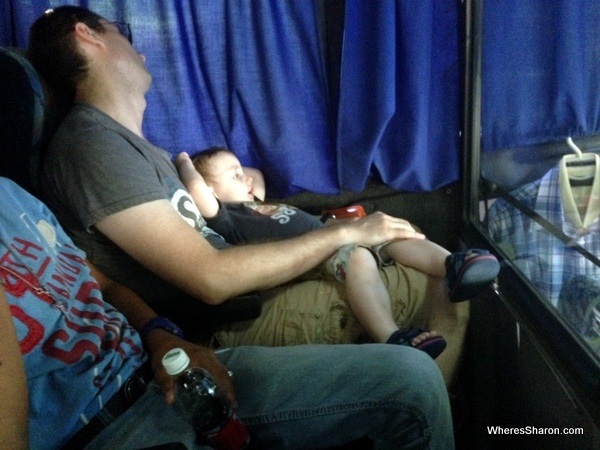 Sleepy boys on the bus

Unfortunately, I didn’t get to see much of the countryside.  I was surrounded by shut curtains, and I was a bit disappointed by this.  I could just see out a tiny slit next to me.  What I did see wasn’t that exciting.  It looked much like when I took bus rides through Central America, only more affluent (relative to Central America, it didn’t look affluent otherwise).  There was a fair bit of rubbish lining the roads too.

Step 4: Catch a taxi or a gua gua to Cabarete

Since no first class buses go to Cabarete, you need to catch a gua gua or a taxi on from Sosua.  It takes about 15 minutes in a taxi, a bit longer in a gua gua (the local vans/mini buses).

The Caribe bus from Santo Domingo dropped us off on a bus stop on the main highway in Sosua.  There were taxi drivers waiting, but they were quoting too much for us, so we planned on catching the gua gua which is meant to be super cheap.  However, while we were waiting, someone else came along and quoted 400 pesos which seemed a bargain.  For $10, we were not going to muck around any further with the kids and luggage and got a ride to Cabarete.

Amazingly, we arrived at our apartment building at the exact minute I had predicted when I set the time with our hosts!

The bus tickets cost 330 pesos (about $8) each.  No discount for the kids, but they are free on your lap.  A bargain for the 5 hours I think.

They were both initially excited by the bus.  Z handled it well.  He slept most of the first half when he was sitting on J, and then played, talked and used the iPad the other half on his own seat.  I’m glad we didn’t bother buying him one.  S was hard work for the first half of the journey and then she calmed down a little bit.  I wouldn’t blame the bus ride though, she was just being demanding and difficult because it’s the way she rolls.  She wasn’t impressed with the bus toilet, but used it with some coercion.

Apart from the drama trying to find the bus to get on, it was all easy and straight forward, and no harder than doing anything else with kids.  I was disappointed I didn’t get to see much of the countryside, but it did give me time to plan the next section of our time in the Dominican Republic.

We were all tired by the time we got to our apartment in Cabarete, but we were soon energised by the new surroundings and ready to go out again!  A successful day.

Read more about our time in Cabarete or about travelling around the Dominican Republic.

Long bus rides with kids – something to be avoided at all costs or not so bad?!