11 awesome things to do in Havana on a budget!

3 November, 2014
This post may contain compensated links. Find more info in my disclaimer.

I spent a few days exploring Havana, both before and after my tour of Cuba.  It is a fabulous place, and I just loved it!  Cuba is amazing.  It is so different from anywhere else I have been that it reignited the explorer in me after I became quite blase about travel as I reached the end of my one year trip. It was an interesting experience just flying here!

Here are 11 awesome things to do in Havana on a budget.  I enjoyed all of them and they are all free or close to!  You could visit all these places with three days in Havana and just about all of them are free. 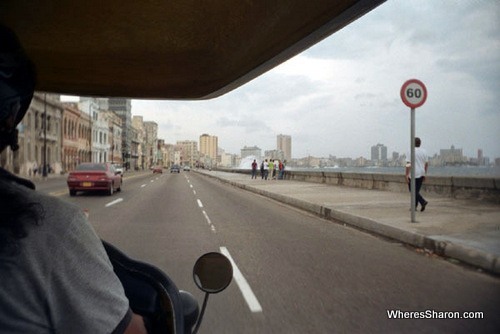 The Malecon from a coco taxi!

I started my first day by walking the couple of blocks to the seaside to the street called the Malecon that runs along it. From my hotel, I could follow this all the way to Old Havana.

The Malecon itself is a worthwhile attraction.  The walk is quite stunning.  It is fun to imagine what it would have looked like in its heyday.  The buildings lining it are big and grand, and they must have been gorgeous.  These days they are all suffering from various degrees of decay.  The disrepair is also surprisingly picturesque. 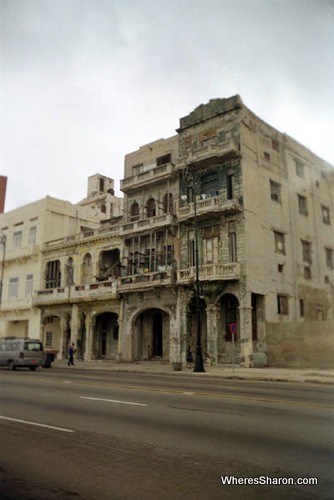 I walked along by the water. The coastline is made up of rocks with a retaining wall. It doesn’t retain much though and I was soaked by a wave in my first minute walking along! Many waves crash onto the street.

Walking around old Havana would have to top any list of things to do in Havana!  This was has it’s own post, so you can read more about Old Havana.

Central Havana has nothing on Habana Vieja, but it is still a great place to check out.

I started by heading up one of the main roads called Prado. It is very nice. The middle of the road has a wide leafy walkway with many trees and seats, and you can see the top of the National Capital Building at the end. I felt like I was back in Europe except for the very different vibe, the groups of kids playing games and the decaying buildings although some were restored along this stretch.

The mix of restored and decaying buildings make it more interesting. It is quite photogenic seeing a gorgeous restored buildings right next to a decayed falling down mess. I am very frustrated by the fact that I don’t have a digital camera at the moment – I want to take photos of everything! 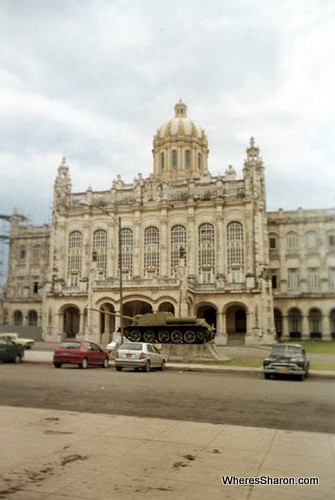 Another awesome thing to do in Havana on a budget is the Revolution Museum.  It is housed in the former Palacio Presidencial, a rather grand place.

Most things were signposted in English as well as Spanish, although only about half the summaries seemed to be translated.  However, since many of the exhibits were documents, they didn’t make much sense if you couldn’t read Spanish. The museum was still very interesting and fascinating with my limited Spanish, but I did also find it  confusing as I didn’t get the whole story.

It details the Cuban Revolution from when they first started fighting the Spanish and onto the present and what is taking place today. Outside they have the entire boat that Fidel Castro and his comrades came back to Cuba on from Mexico in 1956. This is now a shrine to the Cuban Revolution. 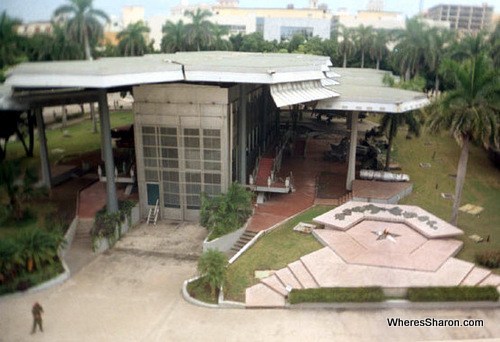 Some of the things I found interesting at the museum – World War II was also called the Great Motherland War. There was a lot of anti American sentiment.  One wall was actually dedicated to everything that they blame the US for. For example, basically any disease that had been introduced to the island in the last fifty years, whether it infects people, plants or animals, is the fault of the US! 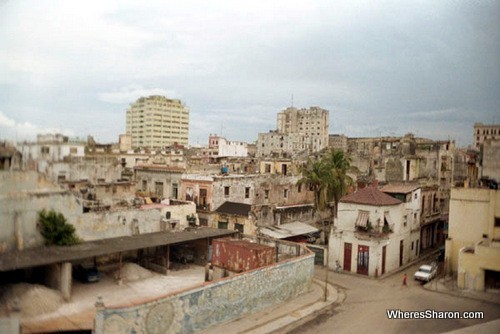 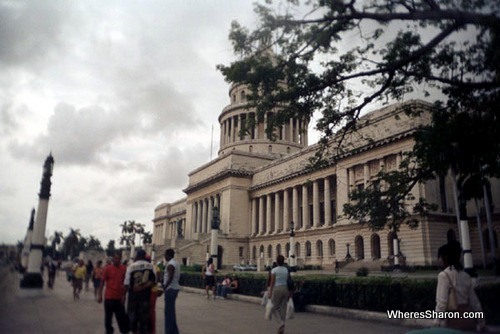 The National Capital building is massive and quite awe inspiring.

The inside is interesting as well, although they were weird about what they would let me look at or not look at. For example, at one point I followed people on a guided tour to see the huge statue of the republic (actually a woman) which is the third largest indoor statue in the world and the inside of the huge dome. However, I only got to look for a second before I was told off. I found this very frustrating as I had paid to go in.

I did still get to see a lot of beautiful rooms, huge marbled walkways and the former chambers of the Senate and Deputies. It was still worthwhile.  The area around the National Capital Building is also interesting. One side of the building was lined with buildings which were beautifully restored.  On the other side, everything looked bad. 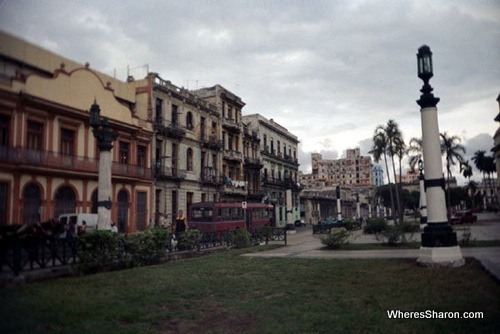 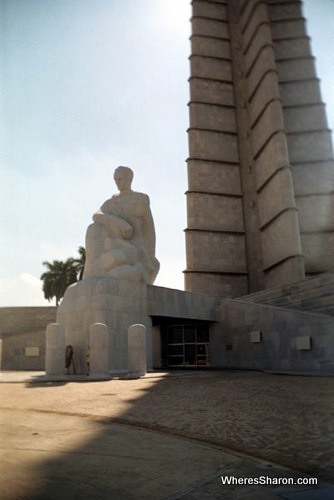 The Plaza de la Revolucion and its huge Memorial Jose Marti is a great thing to do in Havana.

The Memorial Jose Marti includes a 109 metre tall, star shaped tower and a huge 17m marble Jose Marti statue.  It has come to symbolize the Cuban Revolution. On important occasions, Fidel Castro and others have addressed up to 1.2 million people here. The whole place is very impressive and I did get a sense of what an important place it is. Around the memorial are some important buildings, including Fidel Castro’s old office. 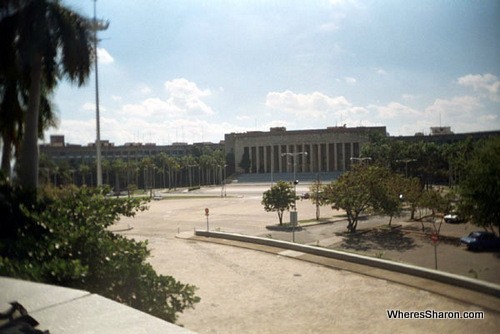 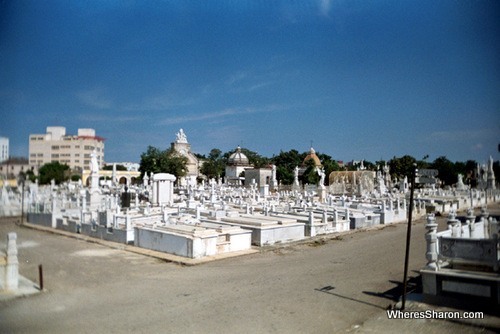 Necropolis Cristobal Colon is the most important cemetery in Cuba. It’s like a mini city of granite, marble and tomb stones. It’s laid out like a mini city with street signs.  It is home to about a million bodies from 1868. There are many impressive tombstones.

Price: 1 peso plus 1 peso for a camera 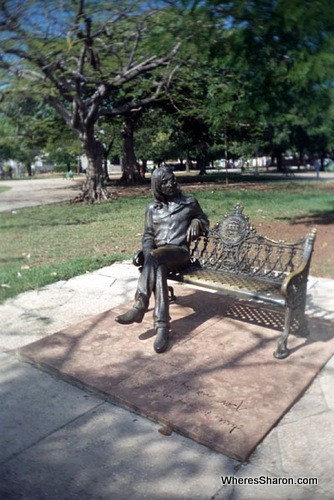 Being a massive Beatles’ fan, I had to check out Parque Lennon.

It is a park with a bronze statue of John Lennon lounging on a bench. Apparently every December 8th (anniversary of his murder), fans pack the park to play music and hold vigils in memory of him. 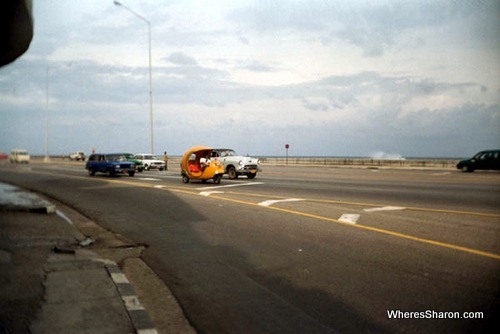 A coco taxi in traffic

There is something called a coco taxi here which always made me laugh. They are a little three seater thing, driver in the front and two passengers behind.  They look like a hallowed out coconut with the roof sort of combing over the top. They look hilarious and I just to catch one!  It was great fun.

If you want to try another different form of transport, I also saw a metrobus which was bus carriages getting pulled along by a mini tank. Very bizarre!

Price: Depends how far you go, but it isn’t much

The old cars in Cuba must be one of the things Cuba is most famous for.  You just need to be on the street for this one.

There are quite a few picturesque old car around, although they are not everywhere, as I had imagined before arriving. The ones that have been well restored and taken care of are just beautiful and some of them are taxis too if you want to ride in one.

11. Walk through some Cuban neighbourhoods

I walked through some Cuban neighbourhood backstreets. Many of the people were on the street, playing and listening to music. I felt like I was invading. It has a great atmosphere. 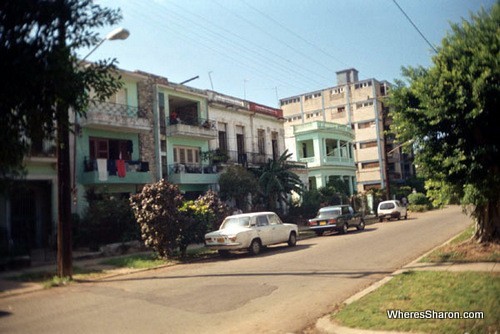 There are a wide range of accommodation options in Havana. I recommend using HotelsCombined to find the best deal. This site lists all the prices for each hotel across all the different hotel booking sites so you can find the cheapest. Here are some hotels that I recommend:

Apart from the cool experience of riding in a coco taxi, I walked to all these places on foot.  Walking is a great way to see more of the city and I always feel safe. It is also great for those of us on a budget.

I had been a bit nervous about walking around Havana alone. It had been awhile since I had been somewhere like this by myself, and I was worried about the hassle I might get from the locals.

In my first half minute outside the hotel, I had two guys stop, stare and say something to me. This continued all the time, but it really wasn’t that bad as they would stop straight away when I ignored them. Even in the areas that the guide book described as being the worst, it really wasn’t a problem.

At times it was amusing. One guy said ‘I love you so much’. What can you reply to that except ‘you’re a wanker’?! Someone else asked if he could have a bit of me. It is hard not to give a reaction to crap like that which I guess is why they say it.

In conclusion, I loooooved Havana.  It is one of the most interesting and beautiful places in the world to visit, and I recommend it to all.

Disclaimer: This post contains affiliate links. If you book a hotel after clicking on these links, I may receive a small commission at no extra cost to you.