10 November, 2006
This post may contain compensated links. Find more info in my disclaimer.

I had read that it was difficult to get around Cuba.  Since I was only there for a limited time, I decided to compliment my time in Havana with a one week tour of the Western part of Cuba.  This was a good choice and I enjoyed visiting Vinales, Playa Maria la Gorda and Soroa. 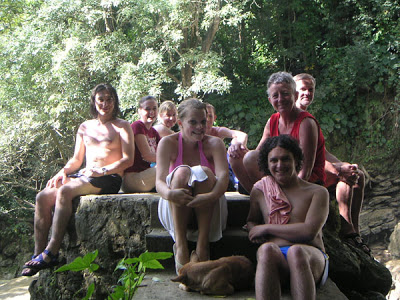 Hanging out at a waterfall with my tour mates

The tour was through Gap Adventures and started and finished in Havana.  A large part of the reason that the tour was great was because my tour mates were all great! There were only seven tour participants – an older Swedish couple, a young couple from Mancheser, a girl from Norway and a guy from Canada.  Charlotte, the Norwegian, was my room mate, and we had lots of fun together  We also had Gail, our Canadian tour guide and an extra guide from Ecuador who had been tour leading in South America for 4 years and was about to start being a guide in Cuba.

Gap Adventures usually uses public transport to get around.  In Cuba, they use a private bus instead, as they say there isn’t local transportation as such. We would be on tourist buses anyway, so they figure they may as well use private ones.  This certainly does make things easier.

My tour was called the “Cuba Libre”, and there certainly were many Cuba Libres drunk over the course of the week.  There was a variety of accommodation from homestays to resorts.  Apart from some disappointments at the end – instead of a luxury eco resort we ended up in some dodgy house, and the tour guide was too hungover to take us to a rum and cigar factory as promised – It was very good, and I was very happy.  There was plenty of variety with the tour and our stops.  My highlight was the home stay in Vinales.  Such a great way to get to know the local people better.

I would recommend a tour like this to anyone.  It was lots of fun and very easy.  It was great to get to see and do so much in a short time without spending half the time trying to work out the logistics.  All in all, it was a fabulous week!