Why I hated my visit to the Egyptian Pyramids

Like many people, Egypt is somewhere I had wanted to go for years.  I was fascinated by Ancient Egypt at school, and a visit to the Egyptian Pyramids always featured prominently on any list of my must see destinations.  I was very happy when I was able to fit it into my six week around the world tour in 2003/4.  Unfortunately, all these years of waiting to see the magnificent pyramids did not prepare me for the disappointing visit which was to eventuate.  I would never have thought that I would end up hating Egypt.

We spent three nights in Cairo, and it is three of the worst nights I have spent anywhere.  We were hassled and abused pretty much constantly.  This dream destination I had been imagining, turned into the worst place I have ever been. 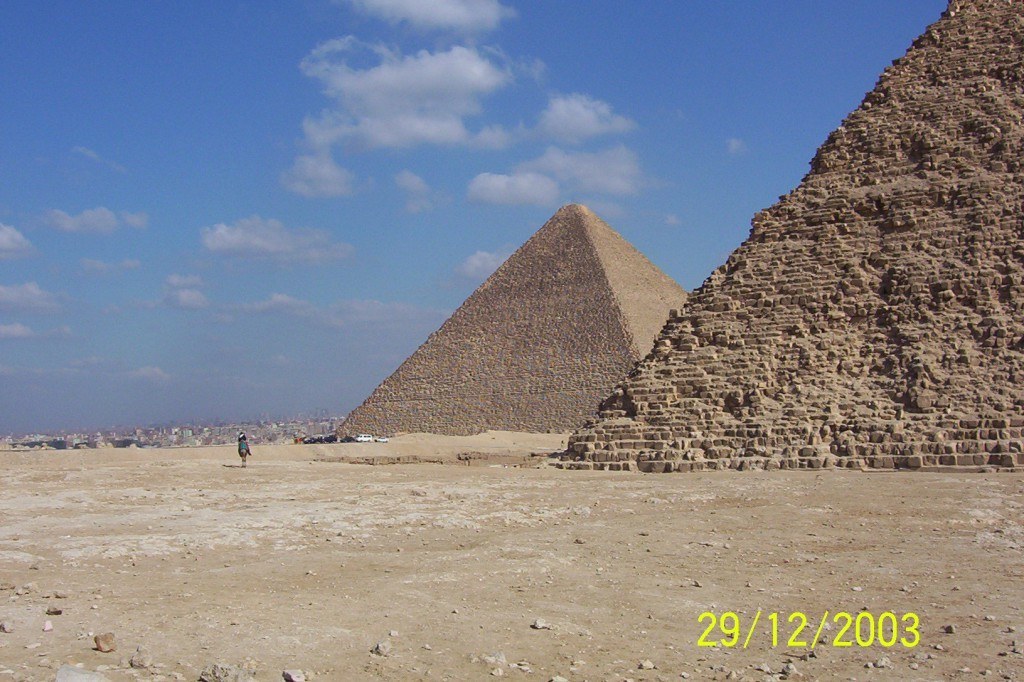 After our wonderful experience being scammed in Bangkok, we had a 12 hour transit in London before arriving in Cairo airport.  It is still to this day, the worst experience I have had in an airport, especially as it was after many hours of travel.

Firstly, many airports have people trying to sell you things like transfers and hotels.  However, here at Cairo Airport, they were actually allowed in all areas of the airport.  We were being hassled before we even made it through immigration, let alone to our bags!  We were exhausted and there was someone constantly hassling us while we lined up for visas, then passport control and then to get our bags.  Speaking of our bags, local people were at the baggage carousel, taking bags off and just walking away with them!  We were lucky we got through immigration when we did, as someone was just walking off with our bag at that moment!

Passport control was dodgy as well.  The guy who stamped our passports kept them, and told us to keep going! He said we would get it when we flew out! No way we were leaving our passports behind, so we waited and kept hassling him,  while he processed other peoples.  When we said we were going to ask someone else, he gave them back straight away. It was very strange.

We were just so tired, so after we got our bags, we finally agreed to allow someone who was hassling us to give us a transfer to our hotel, as we just wanted to get to bed.  Of course, he didn’t just take us to a car as promised.  Suddenly we were in a room that we seemed unable to leave while he kept pressuring us to buy tours.  We didn’t and eventually he let us go and we were in a cab. We were overcharged and on top of that, the driver wouldn’t let us out until we paid a big tip. Way too many dramas at 1am at night after a really long journey.

Our time in Cairo didn’t really improve from there.

We were staying at a Sheraton hotel so we thought it would be good, but that didn’t save us from hassle either.  The porter was mad we didn’t tip him enough (according to him anyway, we thought it was plenty).  We had people knocking on our door at various times expecting money!! And there were lots of things wrong with the room.  It was hard to even leave the hotel as there was so much pressure to use their car service.

Seeing the Egyptian Pyramids was supposed to be the highlight of our trip, but unfortunately the experience wasn’t much better than the one we had at the airport.

Getting to the pyramids was a big hassle in itself.  We were just a short cab ride away, but it was not easy to get one.  Once we managed to get ourselves away from the hotel, and all the touts surrounding it, we flagged down a cab on the main road.  The ride started off innocently enough, but then the cab pulled over and another man hopped in the car.  He was ok initially, but then got the cab to go to the stables near the Pyramids and basically made it stop there for a long time telling us we could only go to the Pyramids on horse back.

I may have fallen for the Bangkok gem scam, but I was not falling for this.  Besides which, I am allergic to horses.  He said all the lines the guidebook said he would.  We put our foot down and refused to get our of the cab, so eventually the cab driver took us on to the Egyptian Pyramids.

For a moment, my breath was taken away.  The Pyramids and Sphinx were amazing and well worth all the hassle we had endured to get to this point.  That first moment of seeing them with my own eyes is something I will never forget and not something that words can convey. 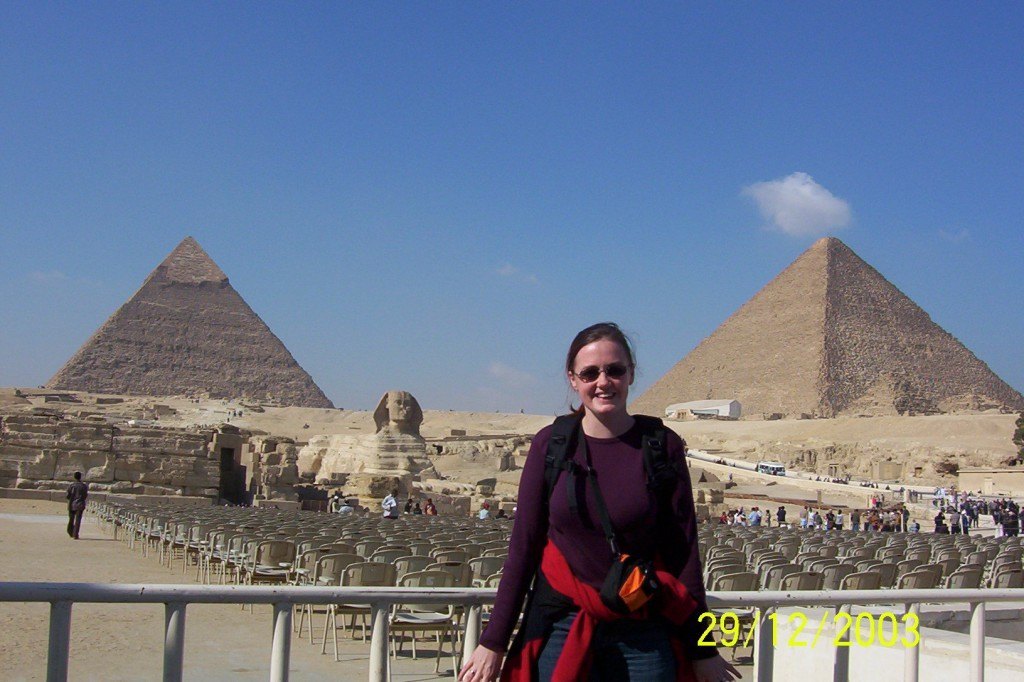 Giza Pyramids and the Sphinx

Unfortunately, the moment did not last long.  We were able to enter the site and walk around reasonably freely.  However, so were many other people and the extreme hassle continued to the point where I really didn’t enjoy the site at all.  People were trying to sell us things, give us tours or have horse or camel rides.  It was relentless.  If you even looked at them, they seemed to expect a tip.  If you did tip them for something, you were abused for not giving them enough.  It was totally out of control.  I was hating my visit to the Egyptian Pyramids.

In the end, we accepted an offer of a tour from one guy in the hope that other people would leave us alone, and we would actually start enjoying the visit.  We negotiated what the tour would entail and how much it would cost.  He then proceeded to do about 10% of what was promised and that 10% involved us having to tip some other people for basically nothing, and then he demanded money and was annoyed that we didn’t pay him extra. I told him he was lucky we were even paying him, since he hadn’t done what he had promised. He was quite abusive.  I was done.

At that point, we had been walking around for a couple of hours.  It is a surprisingly big site.  I would have loved to spend longer, but I could no longer cope with all the people.  We actually had lunch at a KFC right in front of the Sphinx and I joked it had the best views of any KFC in the world.  Thankfully, it gave us a few moments peace from the relentlessness of Cairo touts.  I was happier in the KFC than I had been at the Egyptian Pyramids.  That is so sad.

The taxi back to the hotel also involved us having to put up with a lot of hassle and be very insistent about where we wanted to go. What a fun first 24 hours we had in Cairo.

The following day, we set out to visit the Egyptian Museum and Islamic Cairo.  We took the train and walked large distances which saved us a lot of hassle.  We even had one guy help us when we got lost and not insist on payment!  Otherwise, there was much the same hassle as the day before, just not quite as full on as long as we kept moving.  On the upside, I did get a whole lot of shopping done for a good price. 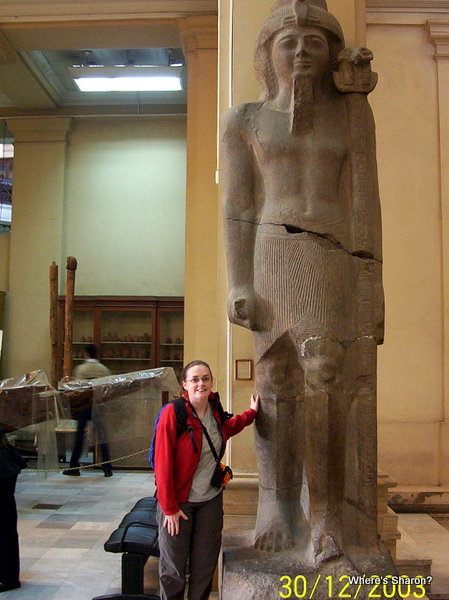 The ride back to the airport was also full of rip offs and annoyances.  Apparently, if someone walks next to us, that deserves a tip.  Who knew!

Anyway, there you have it.  My three crappy nights in Cairo and a crappy visit to the Egyptian pyramids.

It is ironic that in last week’s Flashback Friday post that I was happy about being scammed in Bangkok, but a day later, I had a crappy time trying to avoid scams!  Perhaps I would have just been better off just riding with it, but at the same time, the people we did pay for services didn’t deliver what they promised and got mad at us for not paying extra, so I’m not sure anything we could have done would have improved the situation, short of doing some type of organised tour which would have shielded us from all of this.  Anything would have been better than hating my visit to the Egyptian Pyramids.

Next week, Flashback Friday will continue with our next stop on this whirlwind round the world tour, with a cancelled New Years Eve in Scotland!

Have you been to Cairo?  Did you have similar experiences?  Or have you been somewhere else that was incredibly disappointing compared to your expectations?

Linked to the My Global Life Link-Up at SmallPlanetStudio.com