A happy victim of a Bangkok gem scam

25 October, 2013
This post may contain compensated links. Find more info in my disclaimer.

Bangkok is one of my favourite places in the world.  I love the energy, the food, the people, the shopping, the sites – everything really.  It turns out I even enjoyed a popular Bangkok scam – the gem scam. 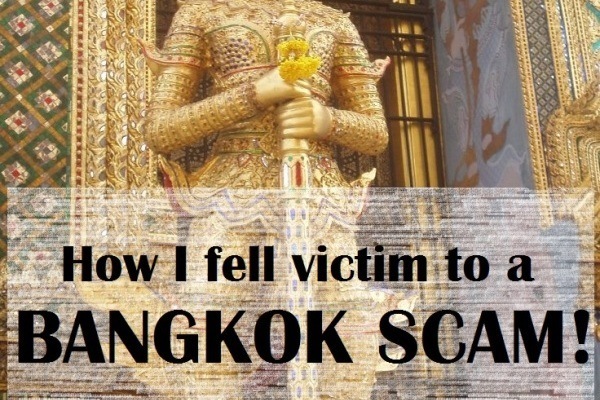 How I fell victim to a Bangkok scam!

The first time I went to Bangkok, I didn’t know anything about this scam.  In fact, I didn’t really know much about Bangkok. What I did know, was that I wanted to visit the Grand Palace.  Bangkok was the first stop of a very busy 6 week, round the world adventure.  We only had a quick 24 hour stopover on our way to Egypt, so we headed there first thing in the morning.

It was a bit of an adventure to get to the Grand Palace.  We caught a ferry along the Chao Phraya with the locals and made our way to the Temple of the Reclining Buddha. It was amazing, and we were excited to move onto the Grand Palace.

I was nowhere near as travel savvy back then as I am now, and when we were stopped by an old man on the way who said he was a teacher and told us that the Grand Palace was shut for most of the day, we believed him.  He told us we should visit some other temples which he drew on our map.  At the end, he also drew on a gem shop – “Thai Export Jewellers” – for if we had time at the end.  He then stopped a passing tuk tuk, talked to the driver and gave us little option but to go with his suggestions.  This was the beginning of our Bangkok scam.

It was my first time on a tuk tuk, and I loved it.  It was exciting.  I was a bit apprehensive about where we were going, but mostly I thought it was lucky that something was working out since the Grand Palace was shut.

The first stop was at a pretty temple by the river. We loved it, especially because there weren’t other tourists there. When we went inside the temple, another Thai guy started chatting to us.  He told us that we were at the temple of the lucky Buddha and that people came here to ask for good luck in their travels! So we preyed for good luck. He also happened to mention the Thai Export Jewellers, and how he goes to London for school and takes over something from that jewellers shop before he goes, tax free, to resell in London to make money. 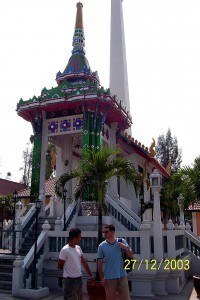 The “helpful” man who said he was taking gems back to London is on the left.

What a coincidence that he should mention London as we were flying there that night for a 12 hour transit on our way to Egypt.  I can’t remember if we mentioned we were going there to the first guy or not, but I guess we must have.  Anyway, the “coincidence” of both people mentioning it was too much and off we went to the gem shop.

I was not completely gullible.  I don’t believe there is any such thing as a free lunch, so I did not believe that we would make money from reselling the gems over in London.  I did think perhaps we might get something nice for a good price though, and it couldn’t do any harm looking.

It was a nice gem shop, and they went the big sell.  I ended up buying a ring for myself.  My travelling companion bought something too.  I thought for his mother, although he told me later it was to resell when we got home.  If he was successful in this, I don’t know.  I imagine not.  This was the point of this Bangkok scam.

They needed to resize the ring, and while this was happening, we visited the other two temples that the man had put on our map and enjoyed them as well.  After we picked up the ring, the tuk tuk driver dropped us off at a canal to get a river taxi to Siam Square.  Unfortunately, first of all he took us to one of those duty free shops they all want to take you in Bangkok.  I argued and argued against this, but it was no use.  I did pay him less because of it though. 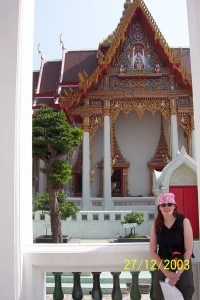 Exploring one of the temples on our impromptu tour

The boat ride to Siam Square was absolutely awesome.  Full of local people and kind of peaceful.  It was the highlight of my day and not something I would have found by myself.  We then caught the skytrain to the weekend market and did some shopping.  We finished off our day in Bangkok with some shopping at the night market in Patong before heading back to the airport.

It was an awesome day!  I have visited Bangkok many times since, and although I have always loved it, no day compares to this first day I had in this wonderful city.  I enjoyed going to the lesser visited temples and using all the different forms of transport.  I love my ring – I still wear it today!!  $60 for nearly ten years constant use is a bargain in my opinion.

As for this Bangkok scam, I believe it still continues today. I know every time I have been to the Grand Palace, people have tried to tell me that it’s shut, but I tell them that they are lying now and keep walking.They sucked me in well enough that I didn’t know it was a scam until someone told me and I did an internet search and lots of results came up.  It is definitely well executed, and they no doubt fool many people.  At least in part anyway.  It was very difficult to believe that we were going to make thousands by reselling their gems, yet everybody wasn’t onto it and doing it themselves.

All in all, I am very happy that I was a victim of this Bangkok scam.  If we had just walked into the Grand Palace, I would never have had such a great day.  It seems that sometimes being scammed is a good thing!  The moral to this story is that travel often doesn’t work out the way that you expect – sometimes, it can work out even better.  Enjoy the ride! 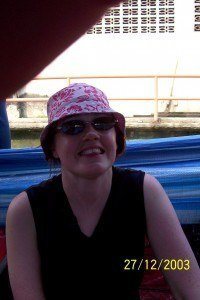 Next week, this Flashback Friday series will continue with the next stop on this round the world adventure – my disappointing visit to the Giza Pyramids.

You can read about more travel scams here. You can also read our full guide to Bangkok.

How about you, have you fallen victim to a scam?  Did it turn out to be a good thing?