I have a confession to make… I hate cultural shows.

It took me a long time to admit it, even to myself. I’d trudge off to one in many of the countries I visited, trying to be a “good” tourist. Then one day I realised it was time to admit it to myself and stop putting myself through it.

Since having a daughter who loves watching dancing and a blog where I try to research all available options for my articles, I have started going to them again. Seeing them through her eyes as helped bring me more enjoyment but they still are not something I look forward to attending.

That is until now.

Phuket FantaSea had me intrigued when I first learned about it when researching Phuket. I couldn’t quite work out what it was. The site says it is a “cultural theme park” and I had no idea what this might mean.

I ummed and ahhed about visting. It sounded really good when I read more but going out at night with young kids is something I actively avoid and that was before we had a third baby. Plus, wasn’t it a cultural show? Would I even like it? Then we decided to stay at a hotel just around the corner from Phuket FantaSea and it seemed crazy not to go.

And we loved it.

I then understood completely what they meant by a cultural theme park. 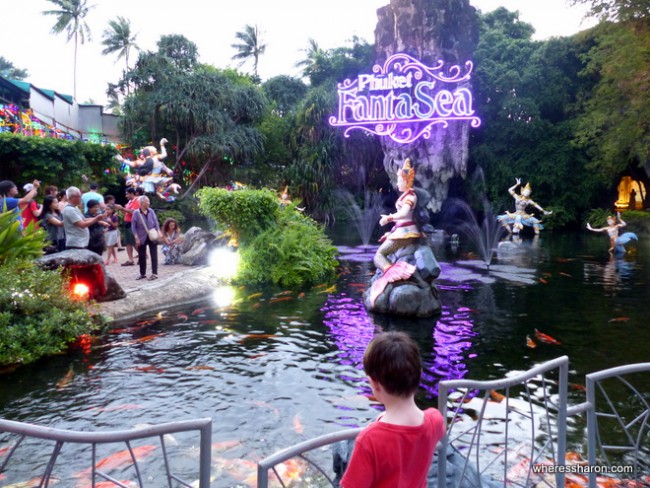 Z feeds some fish at the entrance

To start with, Phuket FantaSea is not just a show. The show is definitely the main event, but there is more to the place than that. There’s restaurants, eateries, a games arcade and the opportunity to see white tigers and some other animals as well as ride an elephant. There was also a smaller show beforehand on an outside stage that was great.

It’s all good, but the show itself is amazing.

It’s a cultural show in many aspects but it is so much more. It’s a complete experience. I saw it described as a Las Vegas style theatrical show and it is.

For a start, the theatre is an experience in itself. It looks like an ancient building and once inside, it feels like you are in the ruins of an ancient structure that the jungle has started taking over. I have never seen a theatre like it. Apparently the inside facade took 500 days to build and I am not surprised. There’s 3000 seats and I would guess they all have a great view. We were right at the side so we could escape easily if necessary with our baby and the view was great.

The show itself was absolutely amazing. There were so many different parts and the attention to detail, the special effects, the scenery and just the drama of it all was incredibly mesmerising

It started with a group of elephants suddenly walking in to the theatre from right behind us and the action did not stop. There was lots of Thai dancing and it told a story, but there were also other aspects, like a magic show section that was incredibly well done. At one stag,e we looked up to see a group of acrobats performing crazy tricks from way up high. It was truly impressive.

One scene showed farmers and suddenly there were chooks racing across the stage and then sheep, as well as many other animals.

It was extravagant and I have seen nothing like it. 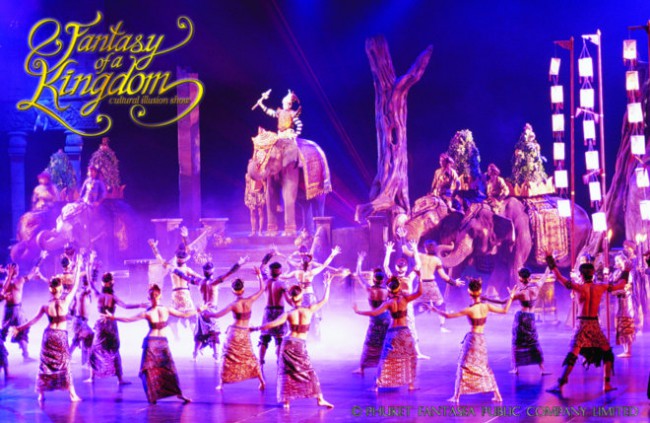 During the performance. Image thanks to Phuket FantaSea

There was a battle with a cannon, monsoon rains… It didn’t feel like any expense had been spared to give the best possible show for the audience. The special effects, the costumes, the performers. It was all top rate.

If all cultural shows were like this, I would be rushing to them in every city. It was just so good.

Josh is one to hardly ever give out praise and he thought it was the best show he’s ever seen. The kids were absolutely mesmerised as well except for the occasional question about how they were doing something in the show which I couldn’t always answer.

Our baby was the only one who wasn’t completely taken in by it all – he managed to sleep through the entire show!

Phuket FantaSea is much more than just the main event. It’s a big site and walking through it is impressive. From arrival where there is a dramatic scene with lights and a fish pond to walking to the restaurant where we had dinner, we were dazzled by lights and sights. 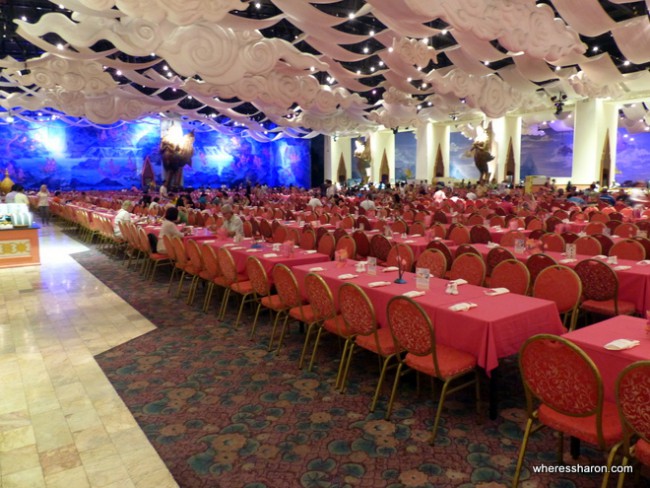 There’s two restaurants as well as some other places to eat. We had a ticket that included a buffet dinner and we ate at a massive 4000 seat restaurant that also had a very impressive exterior (its on water) and interior. The food was very good and there was a good range.

There is also a game arcade with many games to play. It was very kid friendly and the kids loved playing here. S even won a prize. One the way out, she loved having the opportunity to have parrots on her! 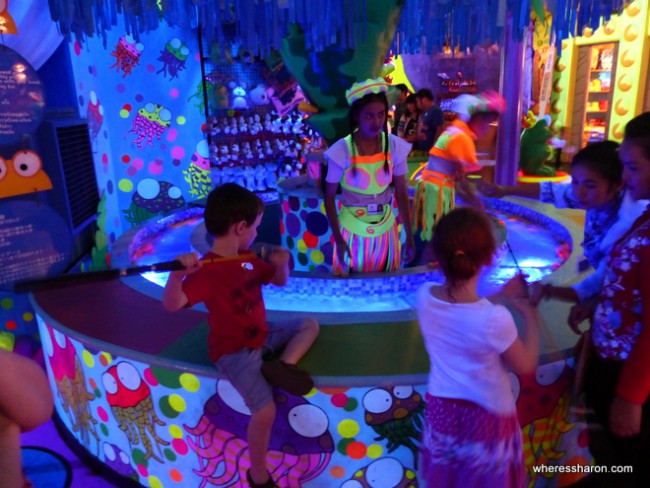 The kids playing a fishing game

There was a show at 7:45pm on an outdoor stage titled “Viva Bangkok” which was very enjoyable. It started with a dance group and a singer singing a Thai song then turned into a musical about a couple arriving in Bangkok to visit. They went around some of the hotspots and it was fun to watch, especially as someone who loves Bangkok.

There are also many shops as well as the chance to dress up in Thai clothes for photos. There is the opportunity to see a white tiger and other white animals and to ride elephants.

We took our 6 and 4 year olds and 3 month old to Phuket FantaSea . As I said above, I had been hesitant. Like a lot of children, they are hard work when they are tired and the show started at 9pm.

It didn’t turn out to be a problem at all. The older ones were excited to go and with this bribe, they were happy to have a nap in the afternoon before we went. They were then so happy at Phuket FantaSea that they were actually inncredibly well behaved and I am very happy we took them.

Our baby did something totally unexpected and slept just about the whole time we were there!

There is a bit to do at the site so we recommend following their guidelines and arriving around 6:30pm for the 9pm show. We arrived around then and this allowed time to eat and check out the other attractions before the main event.

We had tickets which included the buffet dinner which worked well. It was a great way to get the kids extra excited about going (they love buffet dinners) and gave us a chance to chill a bit before the show.

Visit any other shows that are on during your visit – the one we saw was great.

You can also buy transfers. We were staying so close that we walked to Phuket FantaSea but we got a transfer back which was quick and easy. They have plenty of vans going everywhere.

You cannot take cameras into the theatre and this includes mobile cameras. They will store them safely for you, but if this is an issue for you then leave them at your hotel.

At busy times, they also have shows at 7:30pm which would have been my pick with kids had there been that option when we visited.

You can buy discounted tickets here.

As you can already tell, we loved it! In fact, it is something I would definitely consider going to again next time we visit Phuket as the show was just so amazing. And it worked so much better with our kids than I dared hope. They loved it too. It’s not cheap but then it is high quality and you very much get what you pay for.

I actually don’t have any criticism of Phuket FantaSea except to say that there are animals in the show including many elephants, a tiger, buffalo, birds, chooks and sheep. If this is something that bothers you then you may want to give it a miss.

Otherwise, visit! It’s a fabulous show which will completely change the way you think about cultural shows.

You can find more information on their website including the latest ticket prices or find discounted tickets here.

You can also read our full guide to visiting Phuket with kids with 19 other things to do on your holiday.

Disclaimer: We were guests of Phuket FantaSea . As always, our opinions are our own.