This week’s Flashback Friday post is a bit different.  Mainly, because it’s not Friday!  That is because I have joined a blogging challenge over at Small Planet Studio to post today about my first global experience.

Enjoying Verona on my first trip to Europe – I look so young!

I tried to think of something profound to blog about.  Something about how the world touched me and I felt like a global citizen growing up or some other such thing.  The problem was, I didn’t.  I grew up in Hobart, Tasmania, and mostly I felt like i lived on the edge of the world, a long way away from everyone else.  It was not very multicultural (unless you count all the English people), and I did not feel like I was having a “global experience”.

For me, my first global experience would be when I first headed to London on my first round the world trip, so I thought I would blog about that disastrous journey, and leave profound experiences to others.  It wasn’t my first time overseas.  As a nine month old, my parents took me to Hawaii after they won a trip.  At eighteen years old, I flew to LA and then came home two days later as I was so home sick!  These experiences did not feel like a global experience, or really much at all except make me feel like an idiot in the case of the latter trip!

At 21, I lost my job suddenly.  Have you ever turned up to work just to find out the company has shut down, you can’t enter the building and have no idea what’s going on?  I have and it was quite bizarre.  That was my experience of the dot com crash, and that’s what led to my first global experience.

I reacted by doing what any self respecting 21 year old would do – I went to the pub.  After quite a few drinks, I decided I would follow my dreams of going to Europe.  There was actually a travel agency in the same building as a pub, and I had soon booked a 6 week adventure leaving the following week!  The best (and perhaps only good) drunk decision I have ever made.

It was all good until the day I was supposed to leave.  Within 24 hours some super virus had knocked out 5/6 of my immediate family members and I was starting to feel sick – sick enough that my one sister who wasn’t sick ended up packing for me!  Starting to feel sick did not seem like a good reason to stay at home and miss my dream trip, so that evening I set off for London, via Melbourne and Singapore.  My mum was too sick to take me to the airport so some friends did.  They wished me a great trip and said that I had to try to get on Airport, that reality show that they used to film at Heathrow (after they heard what ended up happening, they told me off and pointed out that they were only joking!).

The first two flights were ok, although I was gradually feeling worse.  By the time I hopped on my flight to London, I felt so bad.  I could barely sit up.  I must have looked as bad as I felt as the people next to me asked to be moved!  At least then, I was able to lie down which is what I did.

About halfway through the flight, I got up to go to the toilet.  While I was waiting, something happened that has never happened before or since.  I fainted.  It was horrible.  I remember coming to with my back and head on the ground and my legs up in the air on the seat rests on either side of me!

The situation went from bad to worse.  They were so rude and horrible to me.  The nurse tried to get me a big bottle of water, but they refused.  They got me a small amount and said I was lucky to get that as I shouldn’t have drunk so much!  They actually said that to my face.  I was too ill to argue, although I did point out that I hadn’t drunk any alcohol.  The thing that annoys me most about this is that is something they would already know!  As they hadn’t served me any, let alone enough to be passing out drunk.  It seems if you are young and sick, it must be because of alcohol.  At least according to these horrible people.

They brought the “flight doctor” over.  Some man with an airline name badge.  He was also dismissive of me, and told me off for drinking so much the night before.  Lovely.  I was also abused for travelling alone!

On arrival at Heathrow, they actually brought the paramedics on the plane to check me out and take me off!  The paramedics gave me the choice of going to the hospital or taking me to the train.  I chose the train.

They took me off the plane and then pushed me around the airport on a wheel chair!  At immigration, they asked me  how I was going to get around London in a wheelchair… I was surprised by this.  They dropped me off at the Heathrow express and then I had the very hard experience of getting to my hostel with a big heavy back pack, no currency and no idea what I was doing.  It was tough.

It was a brutal introduction to world travel, particularly solo world travel.  It took me awhile to get better, but it was worth all the pain.  It was some of the most wonderful six weeks of my life.  It’s the first time I really discovered there was so much more to the world than what I had imagined.  So many possibilities.  And so many places I needed to go and people I needed to meet!

It kick started my love of travel, and it changed my life.  That was when I decided to move to Melbourne, and I have never lived in Tasmania again.  Travel opens up your eyes, and that’s what that trip certainly did for me.  It was also lots of fun!

As a foot note (and because I am still mad at them!) , I don’t know how Singapore Airlines, which was the airline involved, is known as one of the best airlines in the world.  I am certainly not flying with them again!  I wrote to them afterwards, and they just denied all of it and acted like I was making it up.  They said they don’t have flight doctors which made me even more annoyed – so that got a flight attendant to say that and lie!  I would have preferred they didn’t reply than make me feel even worse about it.

What was your first global experience?  Have you ever been sick on a long flight?

Flying with a toddler and an infant to the US 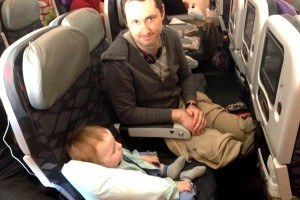 To say that I was terrified about the 15 hour flight from Melbourne to LA with a one and a three year old would be an understatement. ...
Copyright 2013 Jupiter Premium Magazine Theme
Back to top