Flying with a toddler and an infant to the US 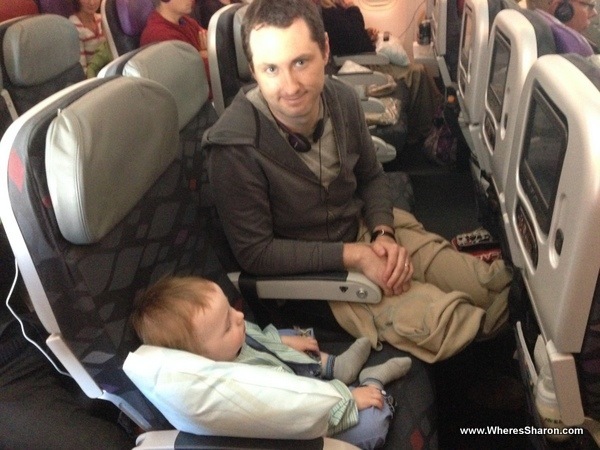 As I said in my post about travelling with an infant on a plane: how to get extra seats, I was terrified about the 15 hour flight from Melbourne to LA with a one and a three year old.  I thought it was going to be the longest 15 hours of my life.  And not just 15 hours.  More like 45 hours by the time you add in the 23 hour stopover in LA, the 5 hours to Miami and then enough time to get to our apartment in South Beach via public transportation.  It just wasn’t going to be pretty.

The three year old did not worry me too much.  I knew she was no doubt going to get over tired and become hard work, but most of the time she can be partly reasoned with.  Plus, she will have her own seat.  It is the nearly twenty month old that worried me.  We were mostly worried about the fact that he mightn’t have his own seat, but thankfully that worked out.

Of course, we knew even with spare seats that it would be hard work.  Z must be one of the worst sleeping babies and now toddler in the world.  I knew he wouldn’t sleep well on the plane.  Even with a seat, he will still probably have to sleep on us, and I can’t really imagine that happening.  He hates being held.  He hates being kept still.  He hates having no control.  It was going to be a hard hard plane trip.

So how did it go?

Overall, it wasn’t that bad.  Most of my worry was for nothing.  It was not fun, and it was not easy, but it wasn’t really any harder than caring for them at home and perhaps easier since I didn’t worry about small things.  They could eat whatever they wanted on their tray, they could use the iPad as much as they wanted.  The problem was the length.  It went on and on and on and on and on and on and on.  The first half especially dragged.  I remember feeling like it had already been 15 hours and checking the flight map and we were only over New Caledonia.  Depressing. 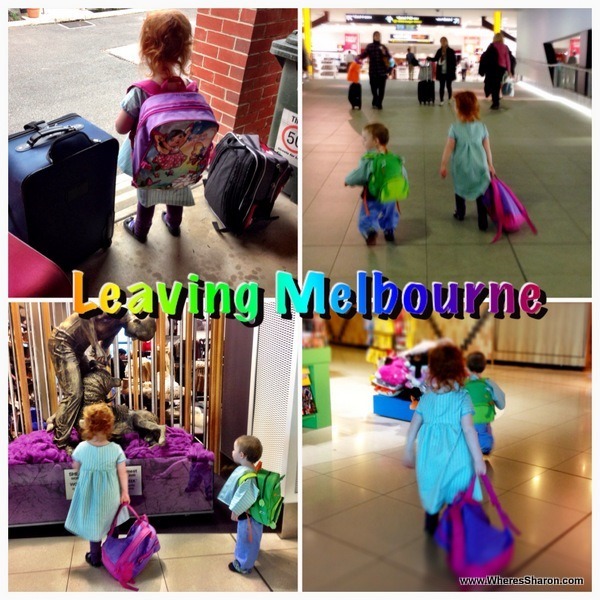 Navigating Melbourne Airport was actually one of the hardest parts.  The airport wasn’t very busy in the middle of the day so that helped, but Z was already due for a nap when we arrived and kept losing it.  He was only happy when he was running away from us, and that is hard work and frustrating.

We had a GST claim to make in the international terminal and J ended up spending an hour doing that while I chased after the kids.  My brother actually works in the terminal, and while I was trying to find him, Z managed to be successful in running away from me.  He was only missing for a couple of minutes, but they were the longest minutes ever.  It definitely showed me that I am not ready to travel with the kids alone yet.

Things improved when we found the kids’ play area and my brother joined us.  It was good to see him, but I was paranoid about getting him in trouble.  They are very strict with security controls with airport employees and it can’t look like we arranged to meet and we can’t hug or anything or he can lose his job!

We eventually boarded our plane on time.

After sitting in the plane for ages before taking off, we finally left about 45 minutes late.  The worst part of this was no toilet access.  Luckily, we had plenty of nappies on us and we had to give one for S when she badly needed the toilet.

After asking people at the departure gate if they could change our seats to give us a spare one, we had been seated with two seats next to someone sitting at a window and then three seats across the middle.  Not that ideal as we like to trap the kids by the window, but it improved when I asked the guy with the window seat if there was any chance if he wanted to move to a spare row of three across the middle near us and he did.

The kids were mostly happy to sit in their seats or to play across the seats that we had.  They occasionally went for walks around the plane.  I am often asked what activities our kids do on flights and I always find it hard to answer.  They just do stuff.  Unbelievably, the time does just fill up with some drawing, the iPads (definitely worth bringing these for a flight like this), playing with teddies, reading, playing with entertainment units (only S, Z couldnt reach it) and eating.  The kids are good at just playing with whatever is around them.

The food was good, but I found I did get a bit hungry.  I had been excited to read that Virgin Australia has a “snack bar” which you could help yourself to.  Unfortunately, this just turned out to be some canned drinks and some plain potato chips.

The extra seats were definitely a life saver.  I hate to think how painful it would have been if we had had to squish into just three seats.  It is definitely not a flight I would really want to do again with the kids so young, but for a one off trip, it is fine, and it has definitely been worth it. 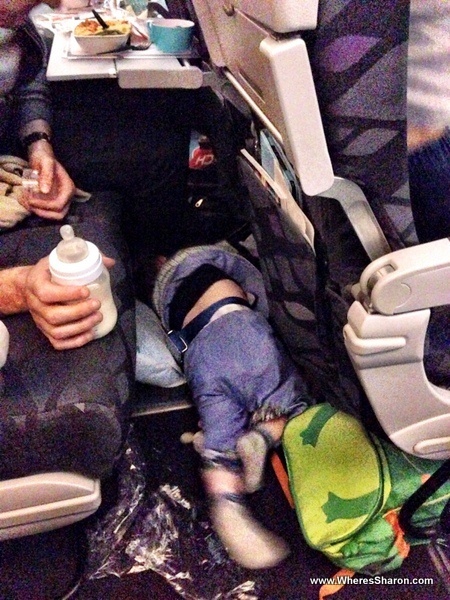 One of the hard times – Z having a tantrum

I have had some negative experiences with US immigration, and I always dread my arrival in the US for this reason.  Someone said to me recently that US border officials are the most humourless people in the world and that has definitely been my experience!   For people who haven’t been following my blog for years, you can read about my most ridiculous experience of crossing into the US when I did so at a land border with Mexico.  It actually ended up being a two day process!

Anyway, this time it was easy.  We didn’t have to line up for long and they only asked us about why we had different surnames… Both the immigration person and the customs official struck me as sexist.  They both asked for “the boss’” documents first.  I actually didn’t realise they meant J and didn’t hand over his documents first!  I think in Australia, they would have been more likely to mean me than the man.

The customs forms were a bit annoying as you can have only one form per family – if you have the same surname.  We have three surnames between the three of us (Z has a hyphenated name), and I didn’t really like having to explain why I didn’t change my surname.  The immigration guy actually took two of them from us so we only had to show “the boss’” one at customs anyway, so I don’t know why I needed to go to the effort to fill in all three.

We were soon outside heading for a cab and on our way to start our American adventure!  You can read about our stopover in LA and our flight onward to Miami.

Practical information:
We flew Virgin Australia for about $3150 in total for 2 adults, 1 kid and an infant Melbourne – Los Angeles return.  A great price!  We were very happy with our experience on Virgin Australia

A quick LA stopover and flying to Miami 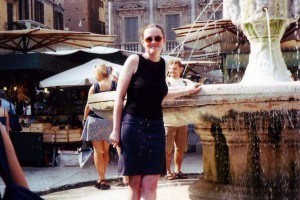 This week's Flashback Friday post is a bit different.  Mainly, because it's not Friday!  That is because I have joined...
Copyright 2013 Jupiter Premium Magazine Theme
Back to top