A quick LA stopover and flying to Miami

Since we were only in LA for 23 hours and we were no doubt going to be exhausted, I had booked as a hotel near the airport.  It came with free transfer BUT you needed to ring on arrival to get it – something that is difficult to do without a mobile or change for a phone.  We didn’t want to muck around anyway after that loooong flight, so we took a cab. 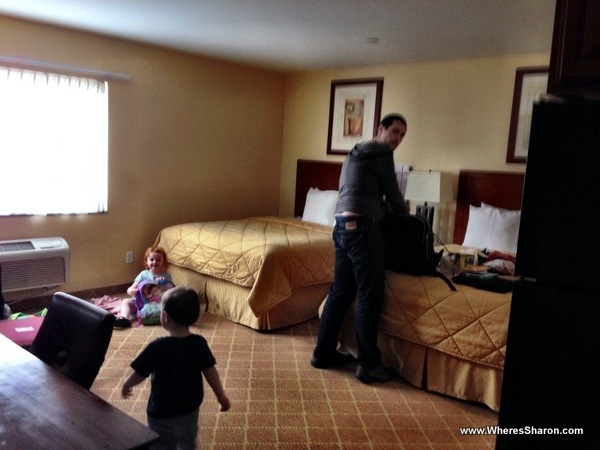 This turned out to be quite pricey as there was a minimum charge of $19!  Probably the priciest taxi ride I have ever taken since it was only 5 minutes away.  Oh well, at least it was all fast and easy.  On the way, the taxi driver told us it was a terrible neighbourhood.  We looked around and once he said it, it was obvious.  We only saw one person on the streets, everything was boarded up with bars and it felt more like we were somewhere in Guatemala City than the US.

He said not to go out walking at night and to take nothing with us during the day as it’s common for 3-4 guys to ride around in cars and to jump out and steal from people walking around.  We would definitely stand out in that neighbourhood too, and I felt quite uneasy.  Lucky it wasn’t for long and the plan was to take it very easy.

The hotel turned out to be a great choice.  They let us check in straight away (it was about 9:30am), and the room was a great size with 2 queen size beds, a decent bathroom and a kitchen area.  It was very quiet, and we soon discovered the beds were ultra comfy with good sheets too.  Bliss!

We set the alarm for a two hour nap.  We didn’t want to sleep longer in the hope we could adjust to the time zone quicker.  Since we were flying onto Miami the next day, we weren’t so worried about adapting to LA’s time zone.  We ended up doing something between LA and Miami time which are three hours apart.

After a nap, J got us some lunch and some food that we could make for dinner.  We ate and then had a swim.  The pool was great and it was a fabulous way to chill after the long flight. 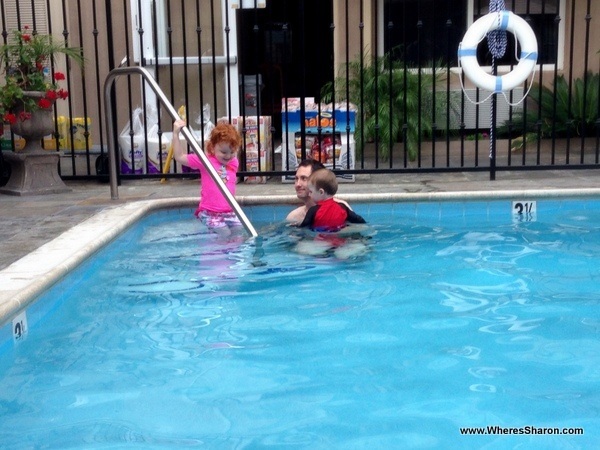 Chilling in the pool

The only annoying thing for the day was that J realised he had left his camera on the plane.  Not good!  We had checked, double checked and triple checked that nothing was around us when we left, so we have no idea how that happened.  Lucky that we still have the iPhone.

Dinner was in our room and then it was an early night for the flight the next morning.  The kids slept well, but J and I had a fair bit of trouble.  We went to sleep ok, but after Z woke us up at 11pm, we weren’t able to go back to sleep for hours.  Jet lag is certainly a strange thing.  At that point, we had been living that day for 42 hours, thanks to LA being 19 hours behind Melbourne and we hadn’t had much sleep.  I don’t really understand why it was so difficult to get some!  At least jet lag does not seem to be affecting the kids at all as yet.

At 5:30am, it was up and back to the airport.  I had considered flying through to Miami the day before.  Before kids, I definitely would have done that (and have so in the past), but it just would have been crazy with the two kids.  We definitely made the right choice.

Practical Information
Comfort Inn Cockatoo about US$90 a night for the two queen bed room.

We took the free shuttle back to the airport and were soon checking in ourselves with American Airlines.  It took awhile to go through security, especially as we stupidly forgot about a bottle of water in the bag.  Z screamed the whole wait and the process which was about 45 minutes, so that was great fun.  We bought some food for breakfast.  We had hoped to buy some food for lunch on the flight too, but it was so pricey – we spent US$47 on two stale sandwiches, a little bit of sushi, a banana, a bottle of water and coke zero.  This is very expensive for the US. We had a fair few snacks in our bags already so we crossed our fingers that we would be fine. 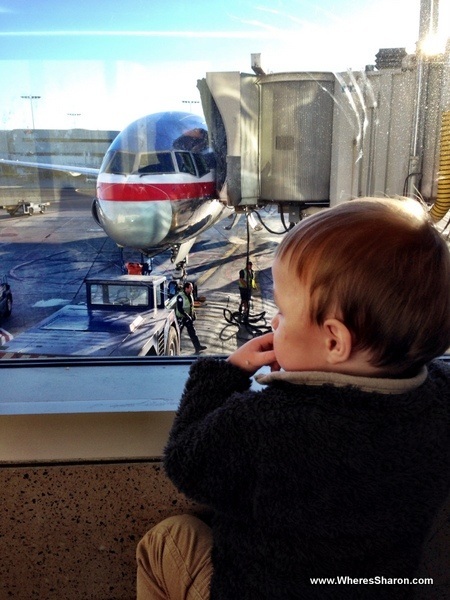 Z enjoys looking at the planes at LAX

For the flight, I had picked a window and an aisle seat in one row and the aisle in front of it.  There were only a few free seats left on the plane when we checked in, but both of these options gave us free middle seats and we were hopeful that we would get a free seat (or two) out of it for Z.  It paid off!  Even better, they had obviously blocked off the back row which was right behind us and the flight attendant let J and Z move there so we ended up with two rows of three – perfect!  You can read more about my tips of how to get extra seats on planes. 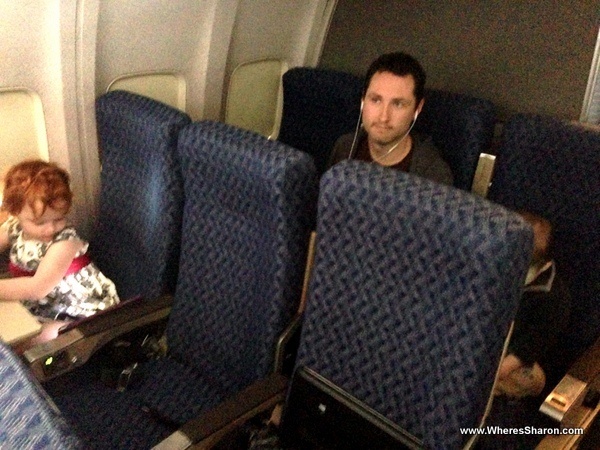 Enjoying all our space on the plane

Thanks to this, the flight was quite painless.  In some ways, we had worried about this flight more than the fifteen hour one since it was a smaller plane (so less space) and we thought it was less likely that we would get a seat for Z.  Extra space really is the most important element to a successful flight.

I was surprised to find wifi on the plane.  I haven’t had this before!  We were also allowed to use electronic devices for the entire flight.  I read a couple of weeks ago that this was going to start being allowed globally, instead of having to switch them off for take off and landing, but Virgin Australia hadn’t allowed it.

The wifi had a charge associated.  I paid US$6 for an hour, primarily for the novelty of it.  It felt very strange to be posting on facebook from the air!!

We played games with dollies and cars, used iPads, laptops and read books for the five hour flight.  It was actually incredibly pleasant, and the time flew by.  I would probably not have believed a five hour flight could be so painless with such little ones.

So far, we haven’t spent very long in the US and being stuck in the hotel makes it seem like we haven’t even left Australia yet!  S’s hair is already getting her a fair bit of positive attention and the kids get lots of smiles which always puts me in a good mood.  I can’t wait for the rest of our time here! You can read about our time in Miami.

Practical Information
We flew American Airlines.  For $1842 in total, we bought flights for the four of us from LA – Miami – Santo Domingo – LA.

Do you like to break up long journeys or do you prefer to get all the pain over with in one go?