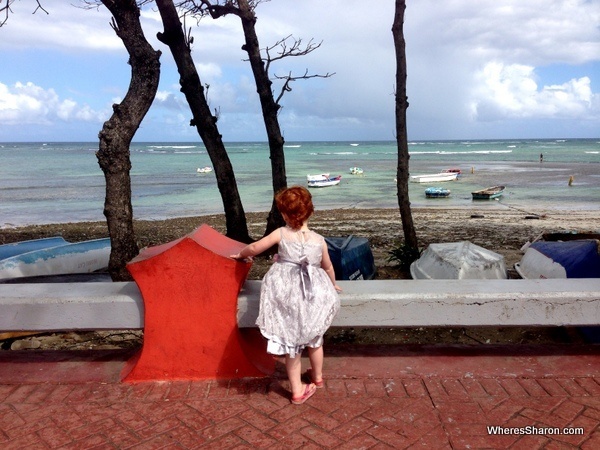 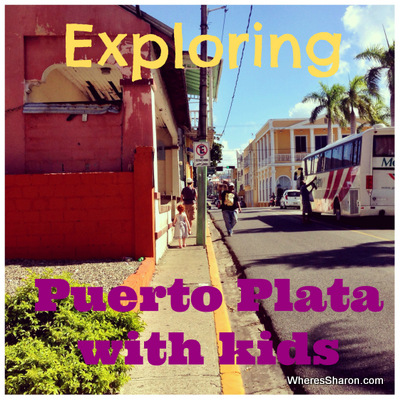 Puerto Plata is the second most popular port of entry for people coming to the Dominican Republic, the most popular tourist destination in the Caribbean.  Most tourists, however, go straight to all inclusive resorts or to one of the beach towns along the north coast like us.  We saw quite a few other tourists in Puerto Plata, but they just about all seemed to be on tours.  It’s not somewhere people come to stay, but there are enough things to do in Puerto Plata to warrant a day trip.  We decide to concentrate on exploring downtown Puerto Plata. 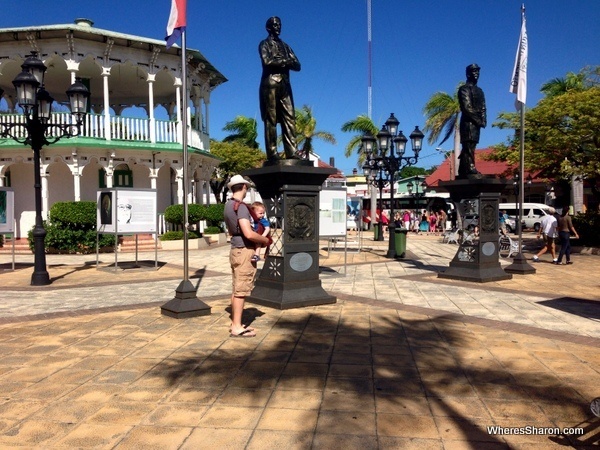 We started our Puerta Plata excursion by exploring Parque Central which was near where we exited the guagua.

It is a nice square with lots of shade and some lovely buildings lining it.  It also has a gazebo in the middle and some interesting paintings, information boards and statues.  The main church is also here.  It is definitely worth a stop on a wander around Puerto Plata.

By the time we got to Puerto Plata we were hungry, so eating lunch became our top thing to do.  We decided to eat by the Malecon, since it was our next stop and it seemed like it would be a nice place to eat – it was!

There are quite a few places along here, so it’s not hard to find something. Prices vary a bit, so it pays to look around.  We managed to have some delicious nachos and beer while the kids had sandwiches. 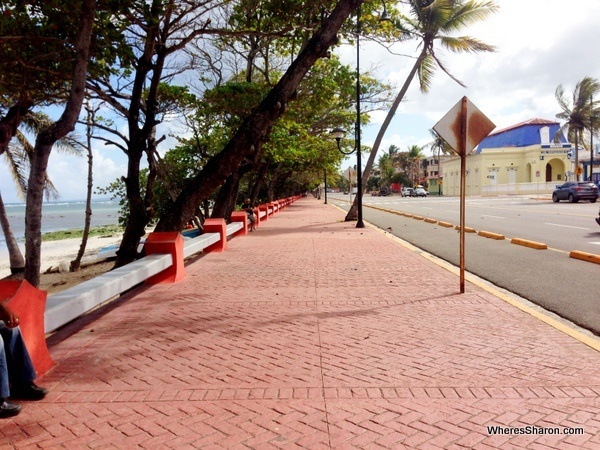 The Malecon is a long stretch of walkway by the Caribbean.  It is lovely and great for a walk, especially with kids as it is nice and smooth compared to the bumpy, broken footpaths elsewhere.  It is also quite pleasant and pretty as long as you don’t look too hard at the shoreline and the rubbish.

There are some small parks by the Malecon as well, on the way to the fort.  They had lovely views of Puerto Plata and the Caribbean.

S checks out the Caribbean on the Malecon 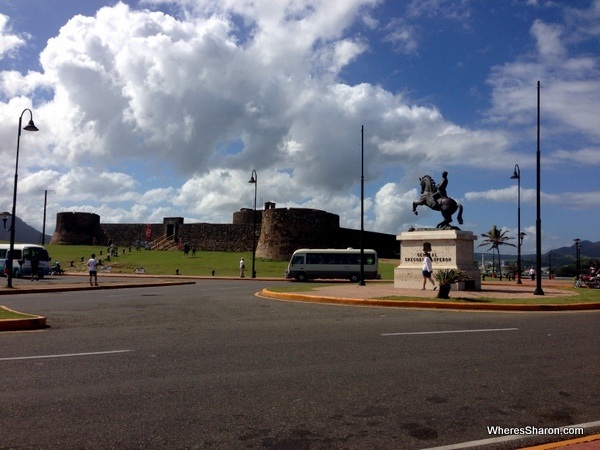 Our next stop is a popular things to do in Puerto Plata – visiting the fort.

It is the only remaining building from Puerto Plata’s early days.  It was built in the mid 16th century and was successful in preventing pirates from taking one of the only protected bays on the Dominican Republic’s north coast.

Today, it houses a small museum.  We didn’t feel the need to go in but we did enjoy the grassy areas around it and the superb views (see photo below).

We wandered back to Parque Central where we had some ice cream before finding a guagua to take us back. 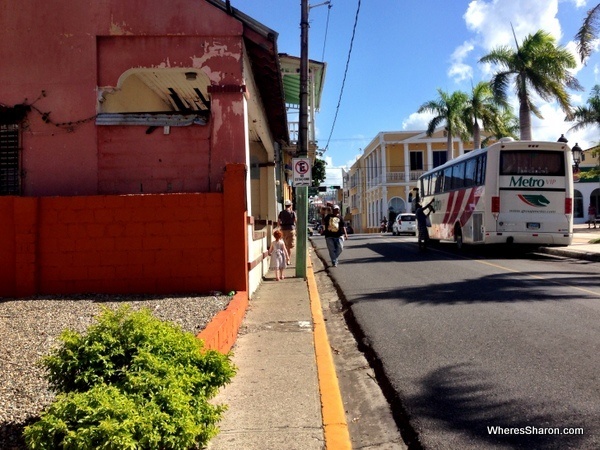 Some of the most popular things to do in Puerto Plata are the Brugal Rum Plant and the teleferico (cable car).  We did not do these since they are not readily accessible from downtown Puerto Plata.  Taxis do not fit in our budget, and Z needed a nap.

Getting to Puerto Plata 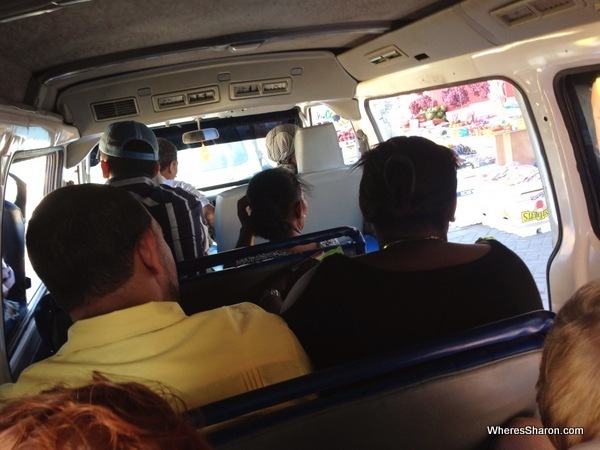 The guagua for one block before it filled up with people – expect four people on each row of seats – plus the kids in our case!

From Cabarete, or any town on the north coast, it is very easy to get a guagua.  Just go onto the main road and wave a passing one down.  It should cost only 50 pesos each with kids free on your lap.  It takes about an hour and is not particularly pleasant for this long since it is so squished.

We particularly had fun getting the guagua to Puerto Plata.  We just missed one, the next one was full (VERY full as just full doesn’t stop them from loading more people on) and the one we finally got gave us dramas when we got off as he tried to tell us it was 300 pesos for the three seats.  We knew this wasn’t true and ended up walking away. It left a bitter taste in our mouths though.

We weren’t sure where to hop on one to go back to Cabarete – thankfully we found one accidentally!  They come by on the east side of Parque Central 🙂 You can also read about how to get to Puerto Plata from Santo Domingo.

If you want to stay closer to Puerto Plata, check out the Be Live Grand Marien which is on the outskirts of Puerto Plata by a great beach.

A visit to Puerto Plata can be as cheap or pricey as you want it to be.  With the things we did in Puerto Plata, it was very cheap.  We just paid for the guaguas (200 pesos or $5) and lunch.  Restaurants seemed to be a bit cheaper than in Cabarete, as was the ice cream we devoured!!

They enjoyed it all overall, but S got sick of the guagua at times.  Z managed to sleep on them!! They liked running around near the fort and they absolutely loved the ice cream stop.

Walking around town was a bit tough for S, it’s lucky she is big for her age as the footpaths were often damaged, there was big gaps between the paths and road and often cars were parked on the footpaths.  She managed fine though, as long as I made a game out of it. 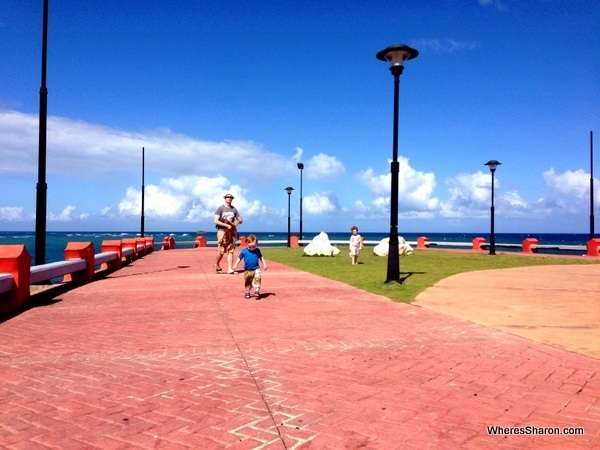 Enjoying the area next to Fuerte de San Felipe

It was an interesting side trip for us.  Puerto Plata is a bit run down but it still has its charms.  There are many big buildings that look like they would be gorgeous if they were maintained.  It is a nice place to wander around and there are enough things to do in Puerto Plata to warrant a half day.  I recommend coming here if you have some free time in this part of the world, but I wouldn’t bother if you were short on time. 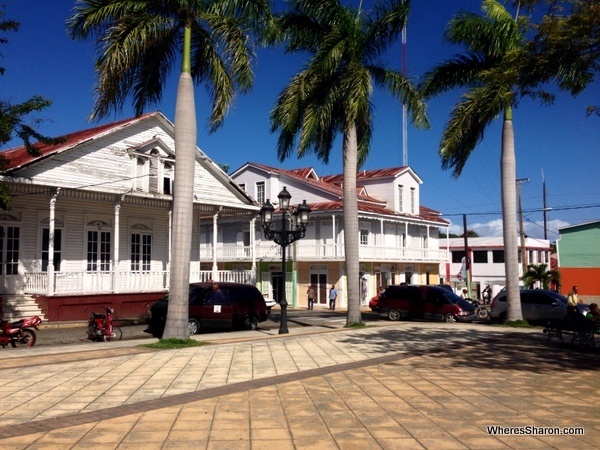 Disclaimer: This post contains an affiliate link. This means that if you make a booking after clicking on this link then we may receive a small commission at no extra cost to you.

Things to do in New Orleans in a few days 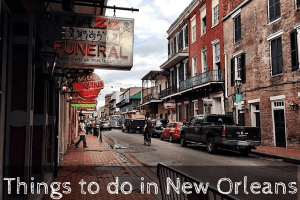 Things to do in New Orleans in a few days

New Orleans - Wow! We had rushed our Road Trip USA Deep South Tour to make it to this city and we were not sorry. It was worth...
Copyright 2013 Jupiter Premium Magazine Theme
Back to top