The adventure of getting from Cabarete to Las Terrenas 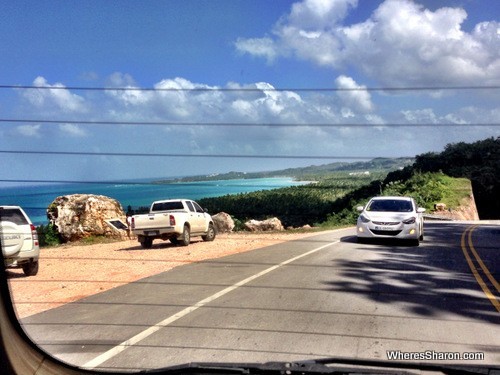 I had been considering whether to visit Las Terrenas while we were in the Dominican Republic since the moment I committed to a holiday rental in Cabarete for three weeks.

Views on the way back to Cabarete

Las Terrenas sounded like a lovely place, and it was basically tied with Cabarete as the place to spend our three week stay in one spot in the Dominican Republic.  When I found a great holiday rental in Cabarete within our budget, our decision was made.

Three weeks is a long time for us to spend in one place though, and the draw of a weekend in Las Terrenas was just too hard to resist.  It is not a well documented route and there is seemingly no easy way between the two places. This surprised me as they are both popular tourist destinations in the Dominican Republic and they are only just over 150km apart.

This is how we did the journey and what we found out.  Hopefully, it will help someone else in our position!  Or at least give you an insight into travelling overland in the Dominican Republic.

A Puerto Plata to Samana bus?

There are a lot of people in forums online speculating that there is a direct guagua from Puerto Plata to Samana at 6:45am that goes through Cabarete.  J even went and waited at the bus stop a few days beforehand to check if one came through.  It did about 7:45am.  However, on the day we went, we were there by 7:15am and it did not come.  A nearby stall holder said there is only one bus a day at 2:30pm.  Frustrating.  Especially as J had seen it before, so we know it at least comes in the morning on some days.

It was extra frustrating as it had been hard work to leave our apartment at 7am after a horrible night.  Z had woken up at 2:45am vomiting. He then vomited in our bed as well.  I then tried to sleep in S’s queen sized bed.  Just as I finally passed out, she woke up and started screaming at me to get out. Charming.  Being a parent is definitely not glamorous work!

The problem with missing the more direct guagua is that the normal ones do not go far.  We were stuck having to take three guaguas to get to Las Terrenas, and we were lucky it wasn’t four.

Guaguas are super squishy, Dominican Republic style chicken buses. Except unlike the Guatemalan variety, they are just small vans.  We were only taking a back pack and Z’s small travel cot with us so at least it was doable on guaguas.  They wouldn’t work well with big luggage.

It was a very long morning and early afternoon, but it was reasonably straight forward.  Here are the details! (The prices below are in total for all of us, but we should have only been paying for 2-3 people) 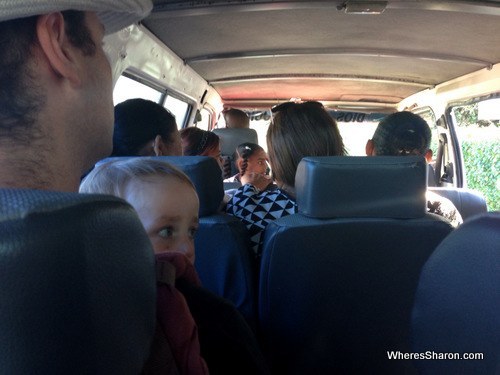 Once we had given up on the Samana bus, we hopped on the next guagua to Rio San Juan.  These come past about every ten minutes.  We were very lucky with the one we caught.  It was quite empty – we had a whole seat to ourselves, and it only took about an hour.

We were over charged and had problems getting them to leave us. They wanted us to take a taxi with their friends the rest of the way for $100.  A bargain price but we did not have the budget for it.

Cost: 300 pesos and an hour.  We were overcharged.

The first guagua dropped us off where we could catch the next guagua.  A friendly stranger found the right van for us.  We were lucky again as this was also fast and not too full. 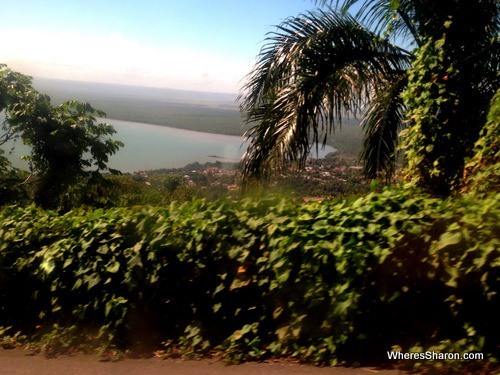 Views on the way to Las Terrenas

In Nagua, it was confusing where to go to catch an onward guagua.  It is a much bigger town than the others we went through.  We also weren’t sure if we would have to go to Sanchez first, or if there would be a guagua along the coastal road direct to Las Terrenas.  The people around us all seemed to be moto drivers who said we needed to ride with them to the bus stop.  We were not getting on motor bikes so that was out.

The next man we asked told us there was a direct bus leaving Nagua at 10:30am (it was 10:10am) from the market.  When it became obvious that we had no idea how to get there, he walked us there.  Lucky he did as there is no way we would have found the stop without help.  We sat at a nearby stall while we waited.

The guagua came at 10:30am.  It was more like a mini bus than a van.  It was like new and very pleasant compared to what we were used to.  The guy who had walked us there insisted on buying the tickets for us.  I was already on the bus with the kids and J had a momentary loss of common sense and paid too much.  It was annoying as I would have happily paid the guy for his help, he didn’t have to cheat us.

The guagua sat there for 35 minutes with a full load.  It was annoying, but we finally took off.

The journey took us about 1.5 hours, but it should have only been an hour.  We stopped for a long time at one point while the driver chatted and bought some things.  While this happening, a couple of people on the guagua bought some empanadas and shared them with everyone.  That was awesome!!

This part of the journey was quite lovely with good views.  It reminded me of driving on Panay in the Philippines – there were beaches lined by palm trees next to the road with little shack houses.  Some areas were set up with food stands and tables and chairs which reminded me of Roxas City.

On arrival in Las Terrenas, he drove around dropping people off so we didn’t end up with too long a walk to our accommodation, the great Hotel Albachiara.

We made it!  It was tiring, but in big part because we didn’t get much sleep the night before.  It was easy enough to do as long as you don’t have lots of luggage.

On the return journey, we had planned to take guaguas.  We asked several people and apparently, there is one direct guagua from Las Terrenas to Puerto Plata at 6am.  To go direct to Nagua, there is only this guagua or one at 10 or 11am – everyone had a different idea of what time exactly it leaves.

The “taxi” was a big new van.  Very nice, but I wish there was a cheaper option in a smaller, older car.

So there you have it.  It is not a simple journey to do on local transportation, but it was easy enough.  The taxi ride was great, but very expensive. You can also read about our bus journey from Santo Domingo to Puerto Plata/Cabarete and our summary of the different options to get around the Dominican Republic.

Would you do a journey like this with young kids? 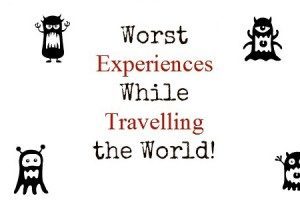 After the surprise popularity of my ten worst travel experiences post, I thought I would ask other people what their worst...
Copyright 2013 Jupiter Premium Magazine Theme
Back to top