We chose to celebrate Christmas in Cabarete, a beach town on the Northern coast of the Dominican Republic.  We thought it would be a good place to spend Christmas as we could easily rent a nice apartment and, being touristy, there would hopefully be dining options that would suit us on Christmas Day if we decided against self catering.  It was a wise choice, we had a fabulous Christmas!! 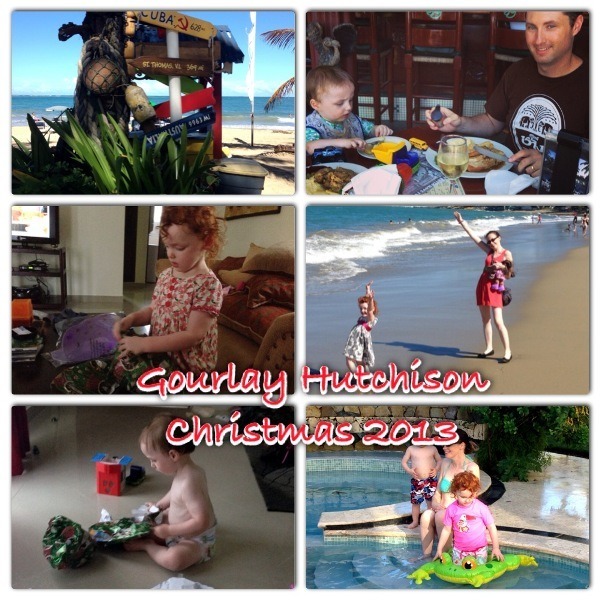 We arrived in Cabarete on the 23rd of December so that we had Christmas Eve to get ourselves organised.  Our first priority in Cabarete was to sort out food for the next day.  When it turned out our apartment didn’t have an oven, thoughts of cooking Christmas lunch went out the window.  J was deployed to find us a restaurant serving a traditional lunch.  He actually was only able to find one place which was doing this.  Jose O’Shays – an Irish bar on the beach.

We also bought lots of supplies.  It wouldn’t be Christmas without drinks and lots of food!! It all added up to a fair bit, so it’s lucky our parents gave us some money for Christmas to pay for it all.  I also bought some small presents for each of the kids from their grandparents.

We kicked off the celebrations on the afternoon of Christmas Eve with the kids getting to open one of their presents – inflatable rings for the pool.  We enjoyed using them.

We assumed the main celebration of Christmas in the DR would be in the evening of Christmas Eve.  I expected full on celebrations like I experienced in Nicaragua years ago.  This was not the case though.  I am not sure if that is just because we are in a tourist town or not.  I didn’t even hear any fireworks!!

The rest of our evening was a bit of a disappointment too as S lost it at 5pm and actually went to bed then!  So there was no putting out a drink and snack for Santa or anything.

The kids slept in until 7 which was nice!  They loved opening their presents.  S was very excited to get her cabbage patch kid, Grace, back.  Z’s favourite gift was his playmobil garage.

It was a perfect day weather wise, so next stop was our complex swimming pool. Soooooo nice!  We played with the kids and their rings, before needing to come back inside and get ready for lunch.

We walked to O’Shays.  I was surprised by how much was open.  There is definitely nothing to worry about if you ever spend Christmas in Cabarete.  We weren’t completely sure what was going to happen at lunch, but it really couldn’t have been more perfect.  We had a lazy 2.5 hour three course lunch right by the beach! 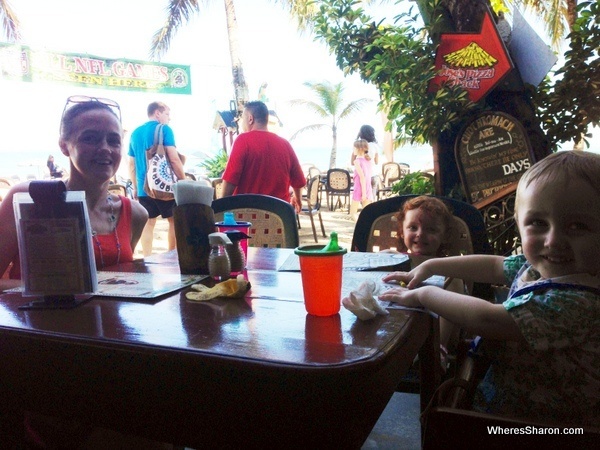 An awesome setting for Christmas lunch

The lunch was delicious and better than I had dared imagined.  It started with some vegetable soup, then a MASSIVE turkey dinner with yummy peas, mashed potatoes, cranberry sauce, gravy and pear.  I have never had pear in a main dish before, but now I want to all the time!!  Desert was pumpkin pie.  I had never even seen pumpkin pie before nor had I wanted to.  I don’t like pumpkin and the idea sounded gross.  That was a stupid attitude though, it was absolutely delicious!

While we waited for food, our kids played with their Christmas presents (Grace had to have a chair at the table too) and in the sand.  The only thing that spoiled what would have been an absolutely perfect lunch (other than our family not being there of course) was the occasional vendor trying to sell us something.  Mostly they were nice though and not too pushy.  As usual everyone was in love with S and calling her Muneca (doll).  Her red hair never fails to gain lots of attention!!

We finished lunch feeling full and gross thanks to eating too much.  It wouldn’t be Christmas without that feeling!!

Next, was a leisurely walk along the beach back to our apartment.  There were a lot of people spending Christmas Day on the beach and it had a fabulous atmosphere.  We were hoping to come back after a nap for cocktails on a mattress on the beach while the kids played in the sand.  Alas, it wasn’t to be after everyone had too long a nap. 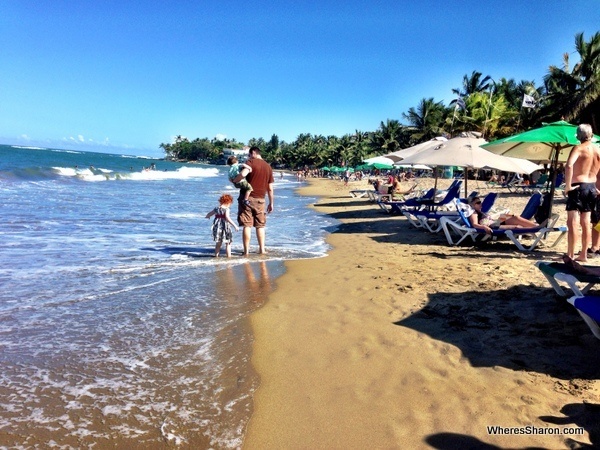 It was starting to get late when we woke up from our nap, so we rung our respective families thanks to FaceTime on the iPhone, put the kids to bed and finished off the day with some wine on our balcony.

All in all, we had a fabulous Christmas Day and we are very happy that we decided to spend it in the lovely little town of Cabarete, Dominican Republic.

Where did you spend your Christmas?