Who has/used to have a Cabbage Patch Kid? 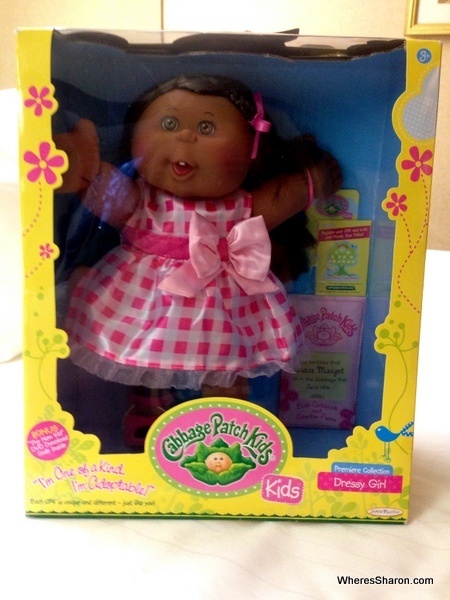 I don’t know what it is like in other parts of the world, but growing up in Tasmania, it seemed like every little girl wanted a cabbage patch kid.

Unfortunately, they were expensive and we didn’t have much money, so I didn’t get a cabbage patch kid until I was 9.  I seemed to be the only one without one, and I clearly remember an incident in grade 2 where every little girl in my class got to to go a special cabbage patch kid party except me. I tried to go with my cheap version of a cabbage patch kid, but I wasn’t allowed in. I was heartbroken. Kids can be cruel.

I was so excited when I finally got my cabbage patch kid.  She was black with dark features and called Shanti Rosa.  I thought she we perfect, well except the second name, I changed it to Elizabeth.  This seems ironic now as my daughter’s middle name is Rose, but back then I didn’t like it.  I clearly remember the birth certificate from Babyland General Hospital – I never would have imagined that I would go there!

Fast forward many years and my obsession with cabbage patch kids is well and truly over.  When I announced that I was going to do a Deep South road trip, a good friend sent me a link.  You can read it here, it’s hilarious.  I knew after reading this that we needed to visit the Babyland General Hospital on our trip. And so we did.

We spent the night before in the town of Helen, 15 minutes up the road from Cleveland, Georgia where Babyland General Hospital is located.  We had attended two different Christmas parades in the area, both of which had a big cabbage patch kid in attendance.  It is obviously a popular attraction around here. The next morning we ensured we were at the “hospital” at opening time. 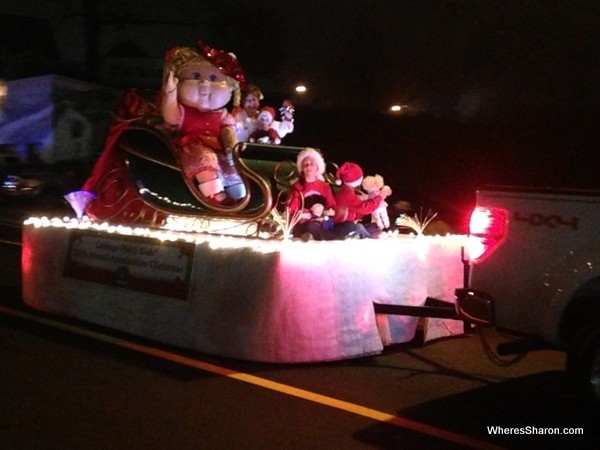 As we drove towards the hospital, we had quite a shock.  It quite honestly looked gorgeous and as you would expect from the picture.  Up close, it started to get funny as we saw freaky looking plaster cabbage patches with heads popping out.  Although I think I was more freaked out by the fact that there was already a crowd around the door waiting for it to open – a completely adult crowd. 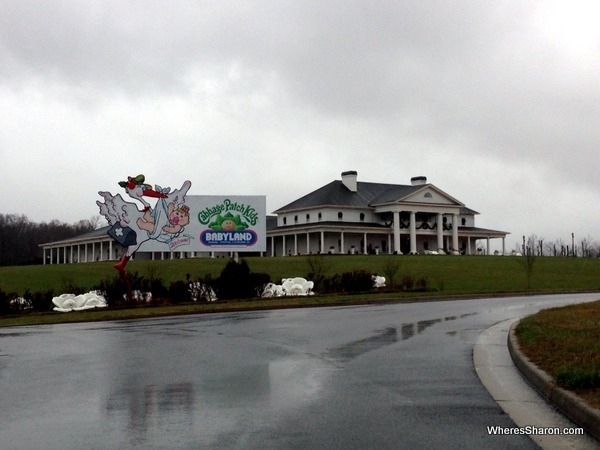 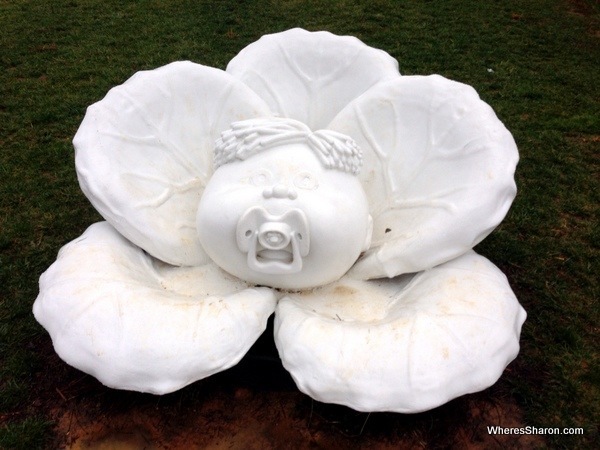 Once the doors were open, we signed in and checked out the hospital. 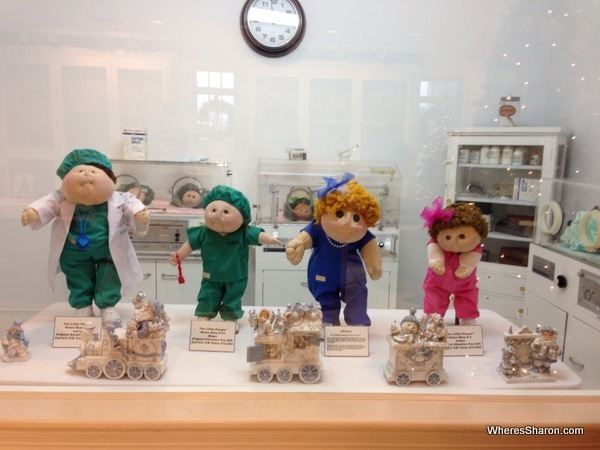 Each of these cabbage patch dolls are worth $15,000! They are looking after the “prem babies”

We then walked through to the nursery area.  It sounded like some of the “babies” were crying which disturbed S.  She wanted to hug them all.  Thankfully the crying sound stopped and they soon were making happy sounds. 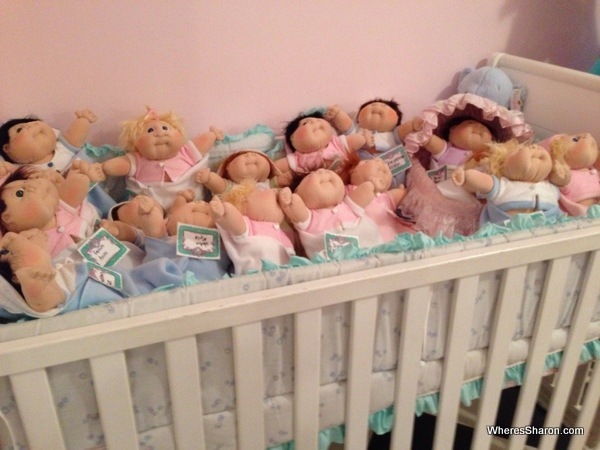 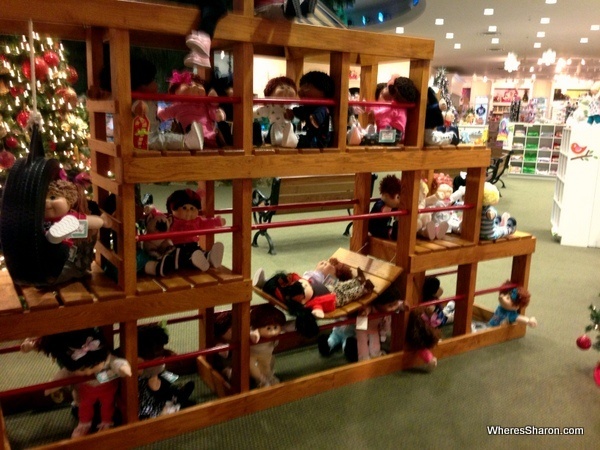 One of the many displays

We looked at all the dolls and accessories while we waited to witness a “birth” of a cabbage patch kid.  There is an astounding array of dolls.  S was in heaven, and to be honest, so was I.  So many pretty dolls and I guess it took me back to my childhood and how much I wanted a cabbage patch kid.

There are many in boxes as well as just sitting round.  Some have names and some don’t.  You can pick one without a name and they will do all the adoption paper work for you on site.  None of the dolls cost anything, you just have to pay the adoption fee 😉

The birth of a cabbage patch kid

The part we had been waiting for!  There was an announcement that a baby was about to be born and everyone surrounded the Mother Patch.  A licensed patch nurse took her position at the top of the patch.  All the staff here seem to be called licensed patch nurses and they are dressed in hospital scrubs. 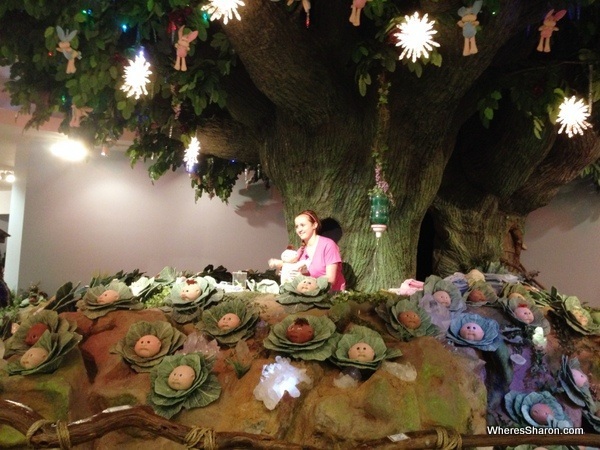 The next five minutes were hilarious as the nurse talked us through the delivery of the baby.  She started with an ultra sound and we found out the baby was a girl.  There was talk of how the cabbage was fully dilated as the leaves were ten centimeters apart.  There were jokes about episiotomies and about how they have never needed to perform a c-section (cabbage section of course).

Once the baby was born, her features and the reason behind them were described, then the birthday girl in the audience got to choose her name. We then all relocated to the delivery nursery next door, where the nurse and baby went behind a glass screen and she checked her, measured her and performed an x ray.  A big red love heart appeared on the screen, beating away. 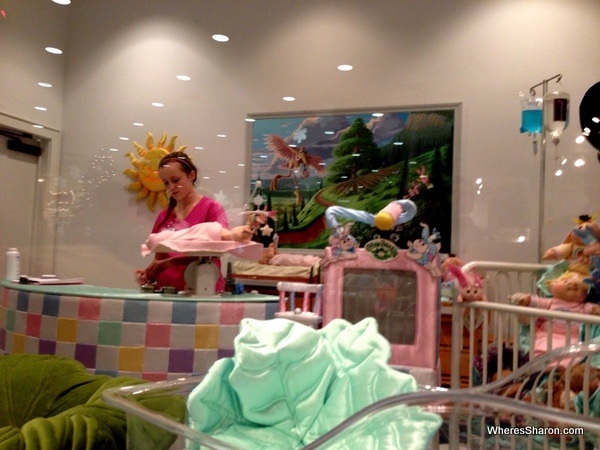 In the delivery nursery checking the new “baby”

She was then brought out for cuddles.  The best part of this was all the adults crowded in to take photos – seriously was it that fascinating?!  In saying that, S looooved her cuddles with the new baby when it was her turn. 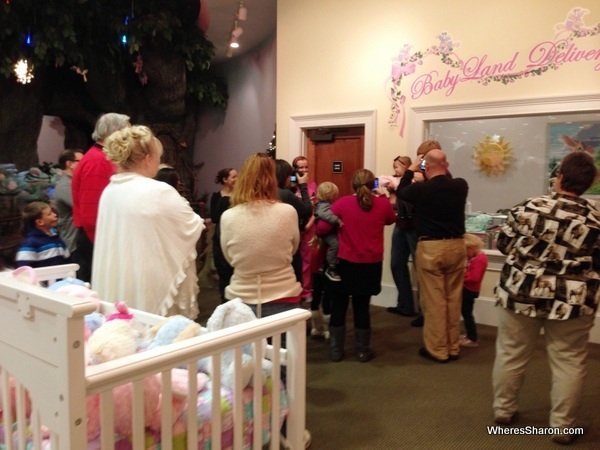 All the adults rushing to see the new “baby”

Of course, we couldn’t leave without buying a doll.  There was no way my daughter was going without a cabbage patch kid!  She chose the one with the prettiest dress called Grace.  She will be going away until Christmas (you can see her in the first photo on this page).

Next up was the hardest bit of our visit – trying to get S to leave!  There were lots of screams but we were soon on our way.

We enjoyed our stop here.  It was the right mix of kitsch, randomness, silliness and seriousness.  That probably makes no sense but I know no other way to describe it.  It was certainly something that you would only experience in America.  It surprised me how many adults were there.  Most people did not have children with them.  There were a lot of older people and I kept nearly running into walkers.  I guess there is probably not much else to do in this area as it does seem to be the surrounding county’s claim to fame.

S loved it.  She was in heaven with all the “babies”.  She just loves all that type of stuff.  Z enjoyed the kid play area which had lots of prams to push around.  We are now thinking about getting him a dolls pram for Christmas since he loves them so much.

All in all, a fabulous road trip attraction.  Try it for yourself!  And while you are in the area, you would be crazy not to visit the fake Bavarian town of Helen.