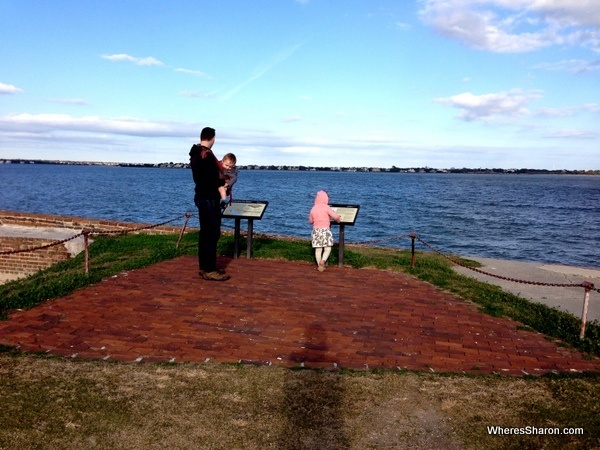 The main reason I wanted to visit Charleston was to go to Fort Sumter. 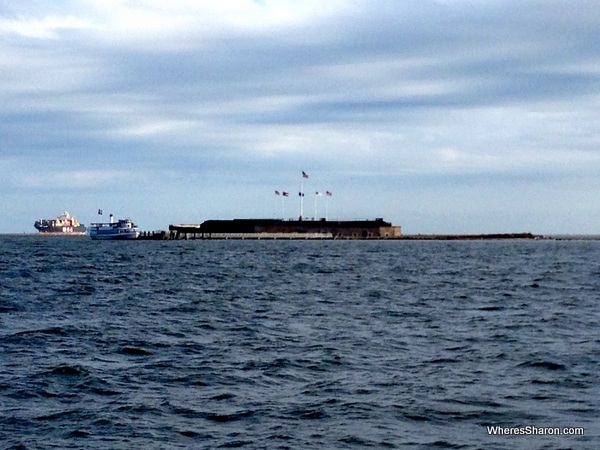 Fort Sumter from the ferry.

Fort Sumter may not be known to everyone reading this post, but it played an important part in American history.  It is the place where the Civil War began.  Having an interest in history, I find the American Civil War an interesting period, not least for the massive impact it had on the United States and the legacy it left. I was so keen to see this piece of history that it is the first place we headed on arrival in Charleston.

Fort Sumter is built in the middle of Charleston Harbour and became famous after it became the site of the start of the Civil War.  While it is visible from several points around the harbour, such as Battery Park on the tip of the Charleston Peninsula, its historic value is enough to warrant a visit if you have the time.

The fort was completed in 1823 as part of a system of coastal defenses and named after General Thomas Sumter (who was a leader of the South Carolina militia in the Revolutionary War). It saw little action until December 1860 when, following South Carolina’s succession from the Union, Major Robert Anderson of the Union ordered his troops in Fort Moultrie – another fort in the area – to the more secure Sumter in the middle of the harbour. The troops, 127 in total, occupied the fort for more than three months.

Matters came to a head in early April when the new Confederate Government learned of an attempt to resupply and reinforce the fort (previous attempts had been turned back). Not wanting the fort’s defenses strengthened, the Confederate Army demanded that Anderson surrender on the 11th of April. He refused and on the morning of the 12th, Confederate artillery opened fire on Fort Sumter.

Union forces returned fire and held out for 34 hours before at last surrendering. The 12th of April 1861 is considered the starting date of the Civil War.

Today the fort is a national monument, preserved and administered by the U.S. National Parks Service. The fort is reachable only by boat. Entry is free if arriving on a private boat, but most people take a ferry from one of two locations. The first is Liberty Square on the peninsula and the second is Patriots Point, next to the USS Yorktown. Ferries take roughly half an hour to get there (and back) and remain at the island for an hour each, making the tour approximately two hours long.

We had chosen to embark from Liberty Square as it was closer to our route. We found on street metred parking close by without a problem.  The ferry was $18 for each adult, kids three and under are free. The ticket office is up a large set of stairs, behind which sits an information centre.

The information centre contains displays briefly outlining key events in American history from the Constitution of 1787 to the Civil War, explaining how the country had split in two, and putting the Battle of Fort Sumter into an easily understandable historical context. .

The ferry has three levels, the lower two being mostly enclosed. We entered on the middle level which was already full so we went up to the open top deck. Although sunny, it was a cold and windy day so despite the nice views we ended up at the bottom level. The ferry itself has good amenities, including plenty of toilets, a snack bar and even a small lift to get between levels.

Both on the journey to the fort and on the way back there was an audio tour played over the sound system. On the way out, like the museum, it put the firing on the fort into some historical context and also pointed out things of interest on the way. We passed by several other forts, including Fort Moultrie, which can also be visited.

Before landing, the audio tour went over the fort’s history after the famous battle. The fort was heavily damaged by the Confederate bombardment, and was then repaired and strengthened before being nearly totally destroyed by Union efforts to retake it. It was then partially rebuilt (with lower walls) by the army post war, before being used as a lighthouse, and then used during the Spanish American war of 1898, about which time a concrete blockhouse was built inside the walls.

The journey over took nearly 45 minutes, blown out a little by the fact that we had to wait for another ferry to clear the docks. Once we arrived we were told we had one hour before the ferry departed, this was more than enough. 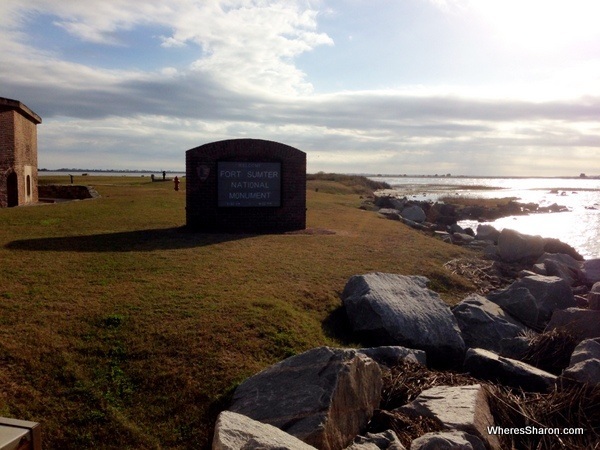 There’s a short walk from the ferry to the fort itself. Just inside the entry gate we were greeted by a park ranger. She was, for those interested, going to give a ten to fifteen minute talk about the fort. We decided the kids wouldn’t last that long and so set off exploring the fort ourselves. Most people stayed for the talk and so, early on anyway, we had most of the fort to ourselves.

Just inside the fort were cannons, some used in the fort, others brought in from elsewhere. There were many firing ports, with the rails for turning mounted guns still present. A few ports had cannons mounted at them. A lot of the cannons were from after the civil war, but some were from that time. Each different type had an informative sign close by. 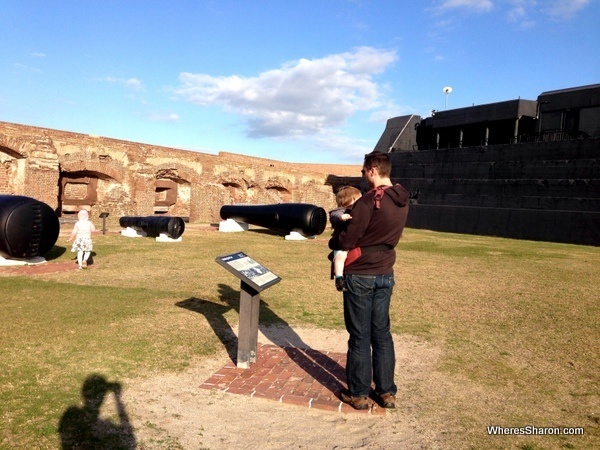 Now that, Z, is a mighty fine rifled cannon.

We walked up along the walls and ramparts and and then on to a grassy area at the top of the blockhouse. Vistas towards points of interest had more explanatory information boards. Usually this had to do with Union efforts to retake the fort or assaulting Charleston. We could easily see the sides of Charleston Harbour and the sites the boards referred to. On the grassy area stood six different flags representing all the different flags ever hoisted above Fort Sumter. 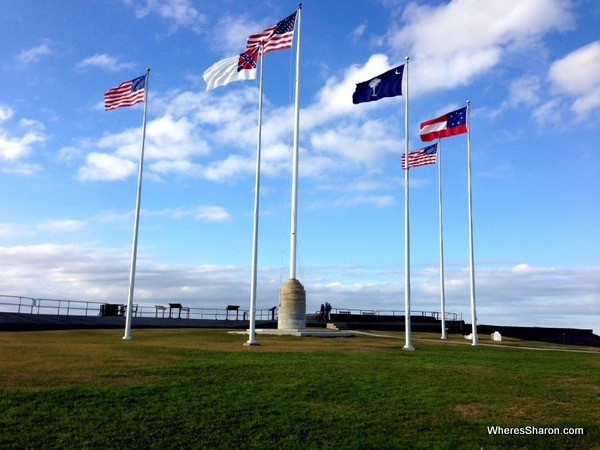 The six flags of Fort Sumter, representng the different “owners”.

Next we went into the museum in the blockhouse. It covered the history of the fort from construction to present, and included the original flag flying over the fort on the day of the famous attack. It looked really interesting, worth somewhere between 10 and 20 minutes (in my opinion, anyway) but we had to leave soon after entering as Z was not happy.

We walked around some more but because of the cold wind and the kids going a bit crazy, we returned to the boat about 25 minutes early. We kept the kids occupied and took them to the toilet before the ferry departed right on time and got us back around 4:45.

Looking out to James Island from Fort Sumter, and imagining what it was like when things got heavy.

All in all we found our visit to be very interesting and worth the effort. Fort Sumter is one of those places where you know you’re somewhere historically very significant, if not so much for what happened there but for the ramifications. Everything is done to help highlight the history and significance of the place. Even if you don’t know much about Fort Sumter before you come, everything is explained in simple terms.

How much is in it for kids as young as ours is questionable.  However, they did love the boat ride and there are big grassy areas at the fort where they could run around, including one outside the fort itself which was mostly free of people. So our kids mostly enjoyed the two hour tour, even though they were too young to learn from it.  So all up, this was a very successful family excursion!!

Practical Information
Tickets $18, our kids were free.  Includes the boat rides, tour and entry to the fort so very good value.  2 hours long and departs multiple times a day from Patriots Point and Liberty Square

Read about our other fabulous things to do in Charleston.

What does USA budget accommodation look like? Motel 6 Columbia 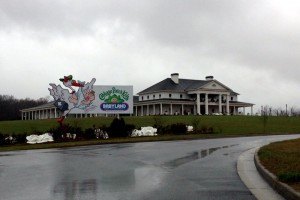 Who has/used to have a Cabbage Patch Kid? I don't know what it is like in other parts of the world, but growing up in Tasmania,...
Copyright 2013 Jupiter Premium Magazine Theme
Back to top