Today was spent wandering around Krakow. It is a very pretty city and great for just walking and taking in the atmosphere, especially since today was such a beautiful day. 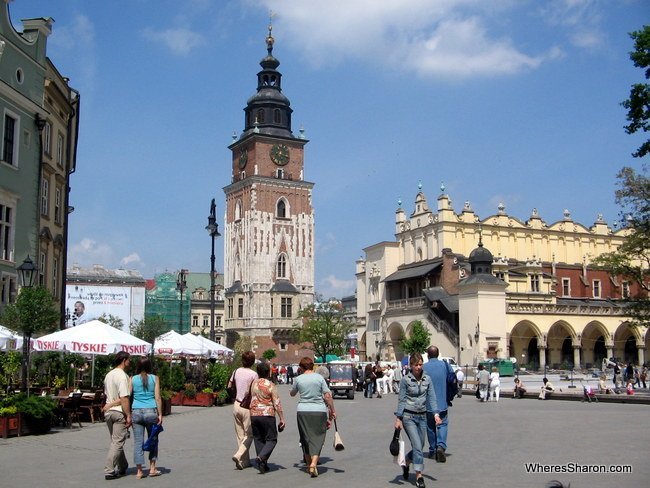 Krakow has the largest medieval square in Europe at 200 x 200m. Unfortunately they were doing a bit of work on a huge section of it but was still a great place to hang around. We also got lucky as they were holding some festival this week and they had what I assume was polish dancing and singing up on stage. It was very good. Nothing like a free show!

I was reminded again how stupid Australian culture can be about men dancing. I found it strange seeing a group of guys who looked like they would have been just as at home on a footy ground up there dressed in costume dancing around. They were very good though (as were the women), but it was very much the men’s show as most of the dancing consisted of them trying to impress the women with their moves. 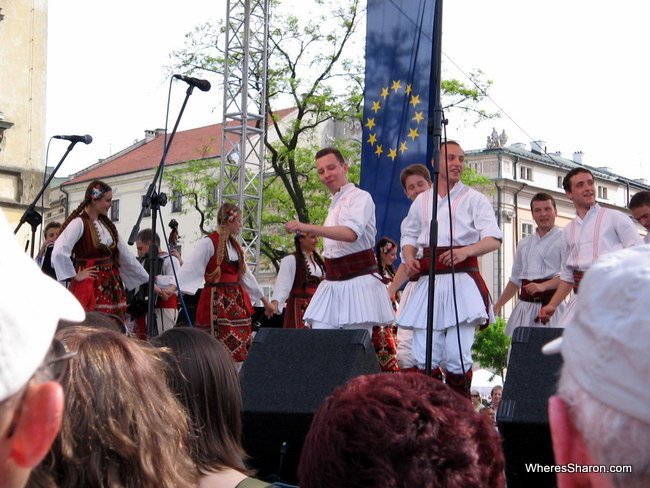 We also explored Wawel Hill, Krakow’s major draw for tourists. There is a big castle cathedral and museums here although we just sat down and chilled for awhile. This hill is actually somewhere that Hindu legend says is one of seven spots in the world that are centres of spiritual energy (along with Delhi, Rome, Jerusalem, Mecca, Velehrad and Delphi) and many Hindus come here to meditate. I don’t know if I would put it on a list with some of those other cities for spiritual energy (where is Velehrad?? If anyone wants to let me know it would be much appreciated!) but it is a great place.

We did our washing for free at the hostel. I was very heart broken though when I realised my new jumper had coloured one of my only two pairs of trousers. They are now a yucky grey. My other trousers are grey anyway and have a bit of a hole from my fall the other day. Not fair! We went shopping but I think I have forgotten how and is hard to enjoy when you know that you can’t really afford a thing.

You can also read about my experience visiting Auschwitz and more recent posts about visiting Warsaw and Wroclaw.

Practical Information
Accommodation Dizzy Daisy Hostel. Highly recommend this hostel. Free washing, drying, internet, included breakfast, kitchen, we have a double room and only have to share a bathroom with another double room for PLN51 each a night. The price is normally PLN75 per person but we actually booked with Atlantis Hostel and then got moved here as they were doing renovations so price stayed the same. Still would be worth it at that price too as very clean, quiet and friendly.