Checking out the North Korean border… 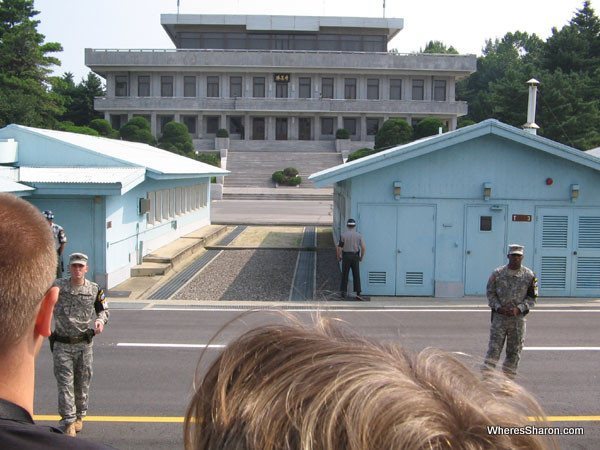 It was an early start for us this morning. We had to be at the US army base by 7am to go for a tour to the DMZ (Demilitarized Zone) and JSA (Joint Security Area) in the truce town of Panmunjom. We had chosen to do the tour through the US Army base as it had received good reviews and was by far the cheapest. Also, most tours only go to the DMZ and we really wanted to go to Panmunjom and be up close and personal with North Korea – going here meant that we would actually get to stand on the North Korean side of the border.

We had been looking forward to this day and it didn’t disappoint.

At the end of the Korean War, the DMZ was formed around the ceasefire line. The area is 4 km thick and runs across the peninsula (248km) and is the border between the two countries. The DMZ is basically no mans land, is heavily mined and even more heavily patrolled (both on the outsides). It is also something of an environmental haven since no one steps foot in it.

Panmunjom is 55km north of Seoul and is as close to North Korea and North Korean soldiers as you can get from South Korea. This village was established on the ceasefire line at the end of the Korean War in 1953. In the UN buildings peace discussions take place even today. You can feel the tension in the air and occasionally gun battles have erupted, the last one in 1984 when a Russian defector escaped across the line. More recent shots have been fired in other parts of the DMZ.

Panmunjom was our first stop for the day. We were not far out of Seoul when we got our first glimpse of the DMZ. We were driving along next to the many watch towers and big barbed wire fences for some of the way. Very bizarre. We could also see the only two villages in the DMZ which are both near Panmunjom with one being in the South and one in the North. Until 2004 they both had loudspeakers pointed at each other broadcasting propaganda. They also both have big flags, the north Korean being the larger one at 160m high and weighing nearly 300 kilos! It’s massive. 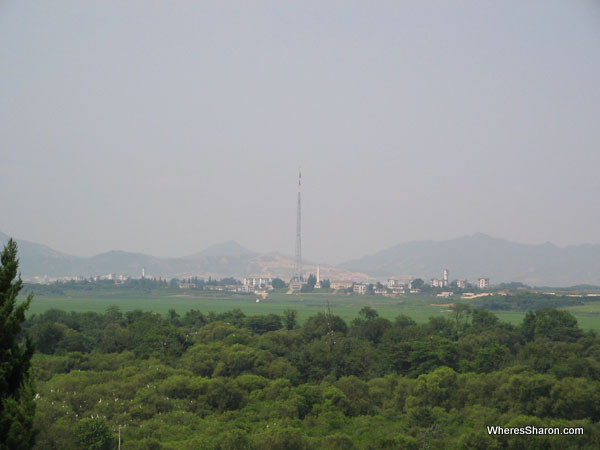 The 230 residents in the South Korean town must be home by midnight and have soldiers guarding them while they work in the fields. It’s not all bad though as they earn about US$80,000 tax free and don’t have to serve in the military (two years service is compulsory for males in South Korea). The North Korean village actually has no residents and is a ghost town.

After going through a couple of military checkpoints where our passports were checked, we arrived at the army base. Here we met our US army guides and saw a short presentation on the situation there and some of the incidents that have occurred in Panmunjom. Eventually we were given UN guest badges after signing a disclaimer stating that we knew the risks.  We then hopped in military buses and were taken to the actual border. It was very, very strange to be standing ten meters from the border (it’s a big concrete line) looking over at the North Korean military and taking photos and filming it with our camcorder (weirdly enough we were allowed to take photos and film what we wanted to here even though for most of the rest of the tour we weren’t allowed). There are many rules and you have to be careful about even not pointing and there is also a dress code. I was actually a bit concerned about some of the people in the tour when they laughed at the guide when he sad we have to all keep together so we don’t step on a land mine… I don’t think they realised it was not a joke!

Stepping over the Korean border…

We then got to go inside one of the UN buildings which straddle the border. We could walk over to the North Korean side so technically, we were in that country. The opposing sides aren’t allowed to walk over the border but they are allowed in these buildings. It was very freaky that while we were in there, the North Korean soldiers came right up to the windows to stare in at us. The only comforting thought was that they didn’t look nearly as scary as the South Korean soldiers. They were standing in intimidating tae kwon do poses with sun glasses and helmets on. They were all black belts in tae kwon do and stood there in a tae kwon do stance with fists clinched looking like they were about to kill someone. They were also all very tall, muscular and highly disciplined. As you can imagine, only the best soldiers work so close to the enemy. 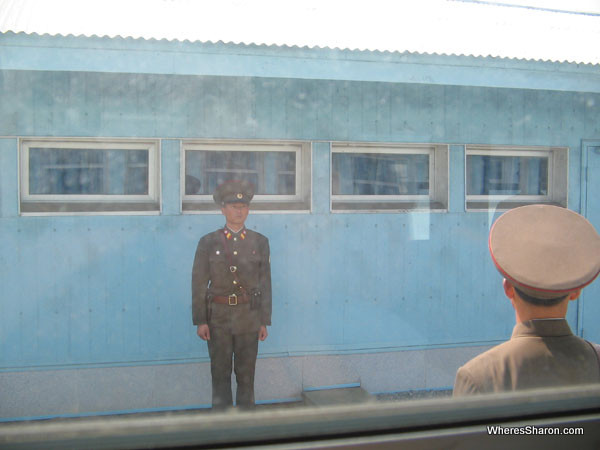 North Korean soldiers in Panmunjom outside the Window

It was an absolutely an amazing experience in an unsettling way and one of the top ones we have had in the last year. I never felt scared but I didn’t feel secure or safe either. Perhaps unsettled and a bit nervous are the best ways to describe it.

The rest of the tour

Nothing in the rest of the tour could come close to the morning, but it was still interesting. We had two other stops (other than lunch). One at an observation deck looking over the whole area and another at one of the tunnels dug by North Koreans over to the South Korean side. Four of these tunnels have been discovered although they suspect there are many more. This one is 72m underground and was discovered in 1978 thanks to the help of a North Korean engineer defector. It was the scariest of the lot as it was big enough for 30000 soldiers to pass through per hour.

We went in this tunnel (not all of the way of course). It’s quite creepy to think of more of these could be under South Korea going undetected.

All in all it was a huge and very good day and you really can’t come to South Korea without doing a trip to Panmunjom.

Want to see it from the other side? Read about visiting North Korea here.

For more Korean travel destinations, read about the best places for winter in Korea here. 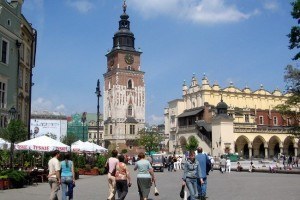 Today was spent wandering around Krakow. It is a very pretty city and great for just walking and taking in the atmosphere,...
Copyright 2013 Jupiter Premium Magazine Theme
Back to top