8 Reasons why North Korea should be your Next Destination!

I have been to many, many places in the world and none have evoked the reactions I have received when I tell people I have just returned from North Korea.

Some people have been very interested, others make a face, some people think I am joking, others think I am crazy or that it is just plain wrong for me to say I visited North Korea.

More interesting still is the reaction when I say I had the most amazing time in North Korea. That it’s one of the best trips I have ever taken. That I would happily go back again. 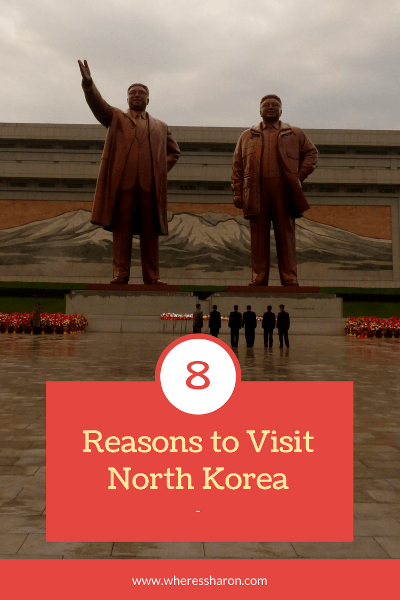 It can be frustrating – enjoying a trip to North Korea does not mean I support the regime in power. Some people seem to muddle these things up. I did not feel like I was risking my life. To the contrary, once there it felt like one of safest places I have visited.

I will be writing far more about my time in North Korea. The good bits, the bad bits and the SUPER AMAZING bits. It’s long and it’s taking time so for now, I want to share 8 reasons why North Korea should be your next destination.

Just to be clear, this isn’t a satire. I’m not being sarcastic. I truly did enjoy visiting the DPRK.

So why do people visit North Korea? Here’s some reasons why!

Just driving around the centre of Pyongyang, the capital, is interesting. There are so many monuments, big plazas and impressive buildings. We were able to visit their most important monuments, museums, the tall Juche Tower, the Arch of Triumph.

In addition to this, just visiting a department store, the local park or taking the subway is very interesting in North Korea. It feels like everything becomes an attraction because it is so different from home and when it’s the same, that’s interesting too! 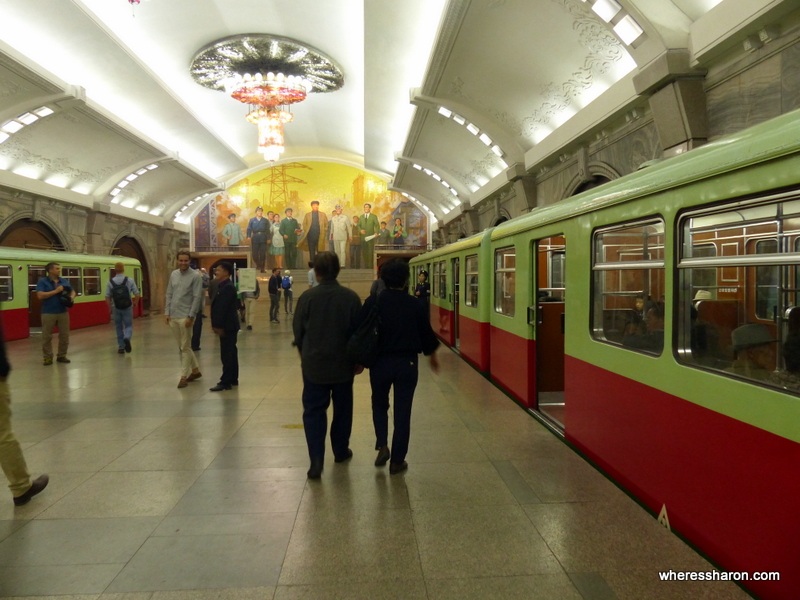 Taking the subway in Pyongyang

It’s easy to forget with all the demonising of North Korea in the media that this is still a country full of regular people.

There is also the chance to visit the DMZ, the border with South Korea (not that North and South Korea exist in North Korea, it’s all Korea). I have written about this before, when I visited it from the south side. Until visiting North Korea, it was, without a doubt, the most amazing travel experience I had ever had. It’s even more interesting to visit it from the other side.

2. Going to North Korea is like entering a time warp

I have never felt like I am in a time warp before. Before I visited Myanmar, people would talk about it being like going back in time but that is nothing compared to North Korea. 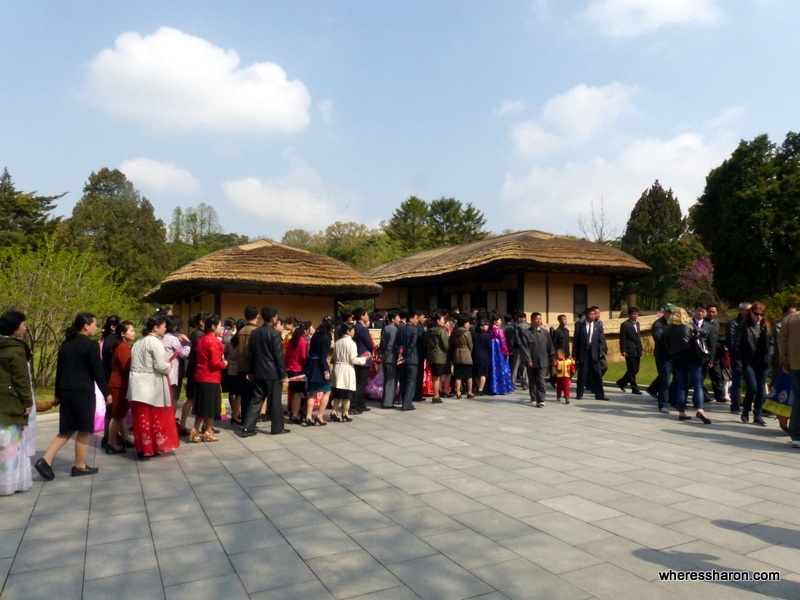 It is like going back to the Cold War and how I imagine a Soviet City to be 50 years ago. At times, I felt like I was in an old Disney movie, like when I took the hotel lift and there was man pressing the buttons in a full on uniform including hat and gloves.

I have never felt so much like I was watching a movie rather than living an experience.

To say life in North Korea is different to life in Australia (or anywhere else of the 85 countries I have visited) is an understatement.

First, there is the propaganda. There seems to be a constant array of murals and signs. I couldn’t read them, but most had an obvious military focus. 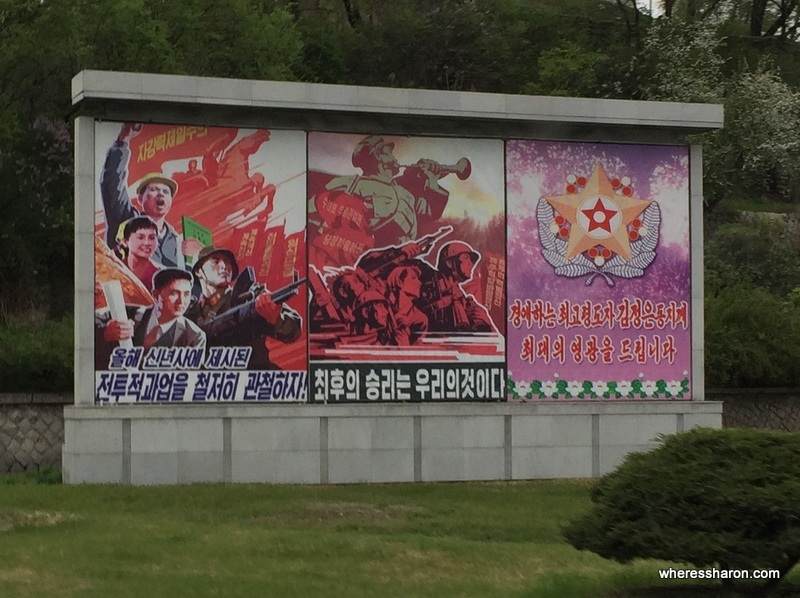 There is propaganda everywhere like how we have advertisements

Much more fascinating is the people. For a start, they are all dressed and groomed perfectly. People wear suits or traditional dress and not a hair is out of place. I spent a lot of time looking out bus and train windows and everyone I saw was well presented.

Next is how disciplined and obedient they are. For example, every single person would get off their bicycle when crossing the road and walk it across. Every single one.

Obviously this by itself is not interesting at all, but it was like this with everything. People all kept to the rules everywhere, all the time. At least when we were around. 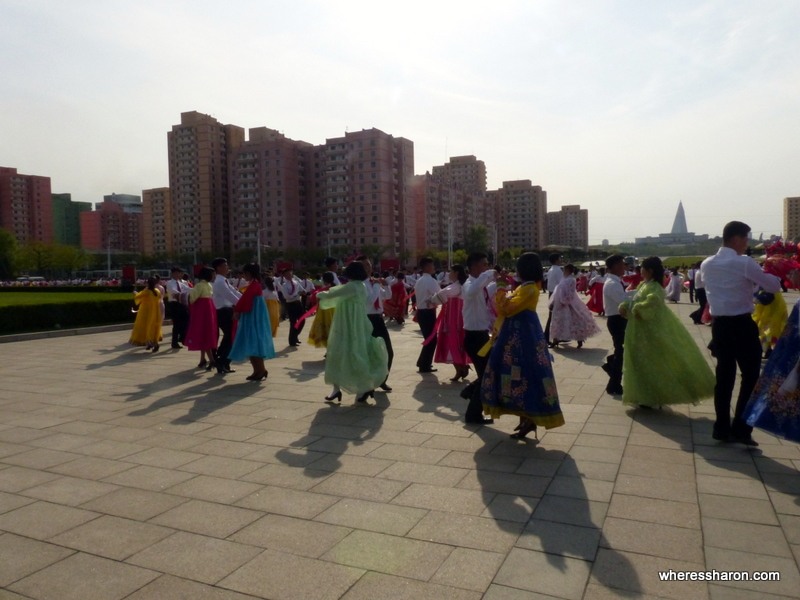 This leads into the final reason why I found it so fascinating. There is a constant wonder about what is real and what is fake.

To visit North Korea you have to take a tour. It can be a private tour or a group tour but you do have North Korean tour guides with you at all times except in the hotel and on the train ride in. Everything is arranged.

This makes it hard to know which experiences are genuine and which are fake. Some experiences did not seem genuine, like when we watched hundreds of people participate in mass dancing. But then would they really go to that much effort for the benefit of 30 tourists? Even if it was fake, the fact that they do that fascinates me.

I felt like I was in The Truman Show and kept expecting to see the same people walk past. I tried memorising faces to catch them out! I couldn’t.

It might surprise you to learn that it is very easy to visit North Korea. You need to do a tour but this is very easy to arrange. I signed up, paid my money, filled in some forms and I was all set to go. At 795 Euros, it wasn’t even that expensive.

You do generally need to go to Beijing first. From here, there are trains and flights. There are some other options but this is the one that Western tourists are going to be the most likely to use. 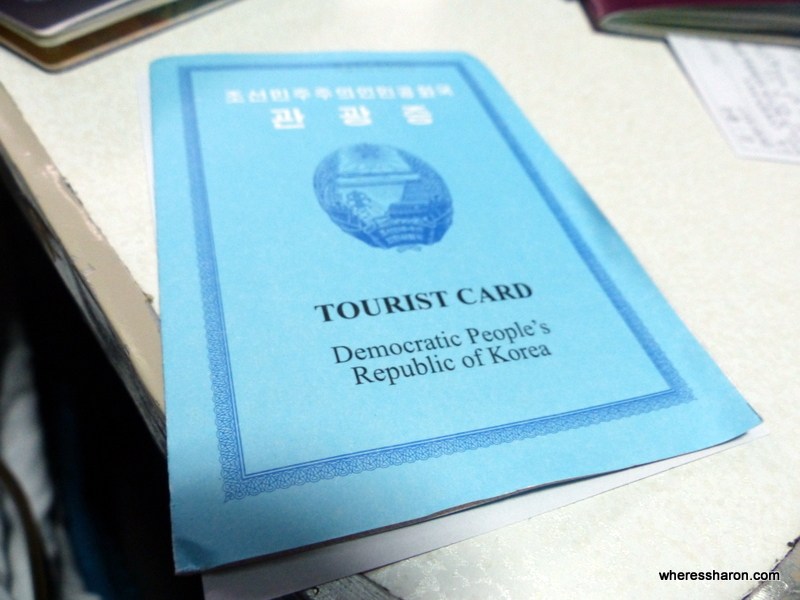 South Koreans are not allowed to visit (unless they have a different passport) but other nationalities can. Americans need to fly in and out and can’t take the train.

There are a few different companies. I travelled with Young Pioneer Tours who I can’t recommend highly enough.

5. The chance of crime is very low

Once I entered North Korea, the worry I had about something bad happening to me disappeared. As long as the country didn’t enter into a war and I didn’t do anything stupid to disrespect their rules or laws, then I had nothing to worry about. 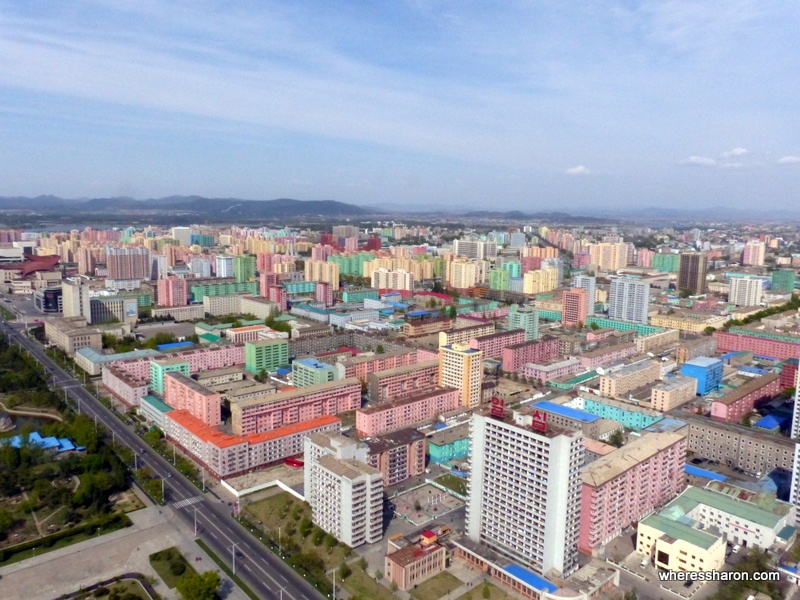 Instead of finding things scary when I visited North Korea, it was quite the opposite. We were treated like honoured guests. It was obvious our guides wanted to make sure we had a fabulous time visiting their country. They did everything they could to make sure this happened.

Meal times were amazing. The amount of food was crazy. They gave us the best of what they had which, I must admit, did make me feel guilty when I knew things like meat are a treat for the locals. 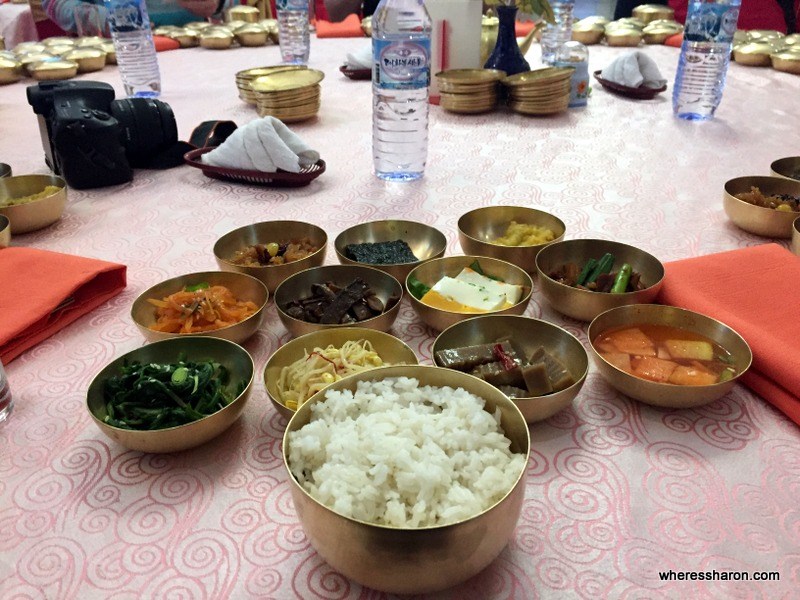 One of my delicious meals in North Korea. You could have dog soup as an extra at this meal!

7. There is no internet

This is a bit of an exaggeration. There is internet but as a tourist visiting for a few days, like me, you won’t have access to it.

I couldn’t make phone calls. I couldn’t check Facebook or email. I had to live in the moment with nothing to drag me out of it.

If you are like me, and travel is your job so you never stop working, you will particularly enjoy North Korea. It sounds crazy but visiting North Korea is the first break I have had in years. It was great.

I did have reception momentarily when we were near the South Korean border and it was good to message home and find out everyone was ok. Otherwise, it was awesome to have a few days disconnected from the world. 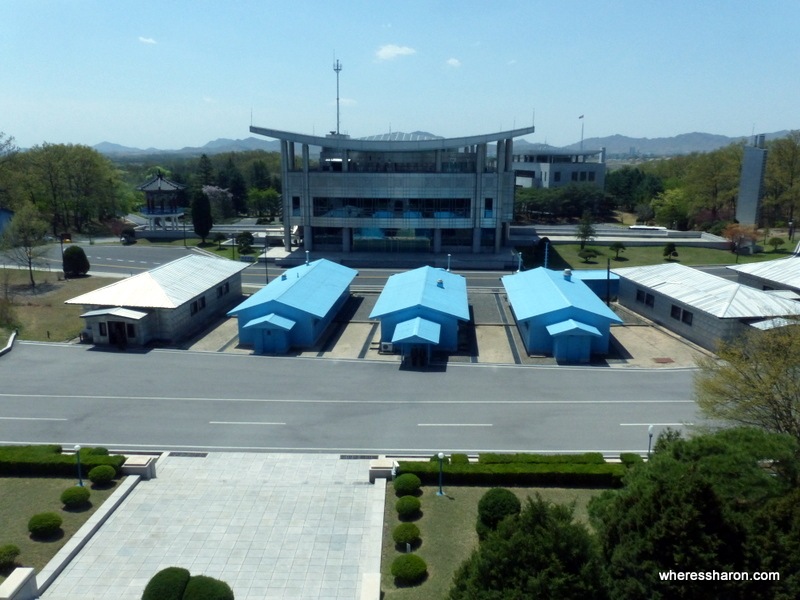 Looking over to South Korea at the DMZ. See it from the other side here.

8. Visiting North Korea is So. Much. Fun.

I expected North Korea to be one of the most fascinating places I have ever visited but what I did not expect was that I would have so much fun.

This is thanks to my tour mates and guides. I am told all tours there go a bit crazy. I don’t know if it’s a result of dealing with the rules, the beer at every meal or how weird the whole experience is, but everyone seems to let loose a little (or a lot!). 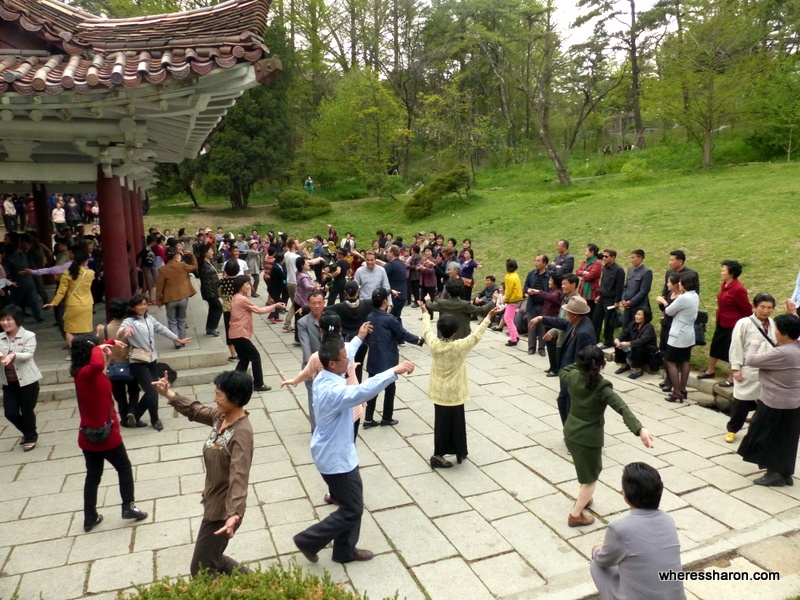 This lead to a lot of laughing, craziness and plain good fun. I am never going to think about a snake or a cow leg without chuckling.

I hope this article has given you a different perspective and why would anyone visit North Korea. There is so much more to this country than bombs and dictators. It really is the most fascinating place in the world to visit and one you should add to your bucket list.