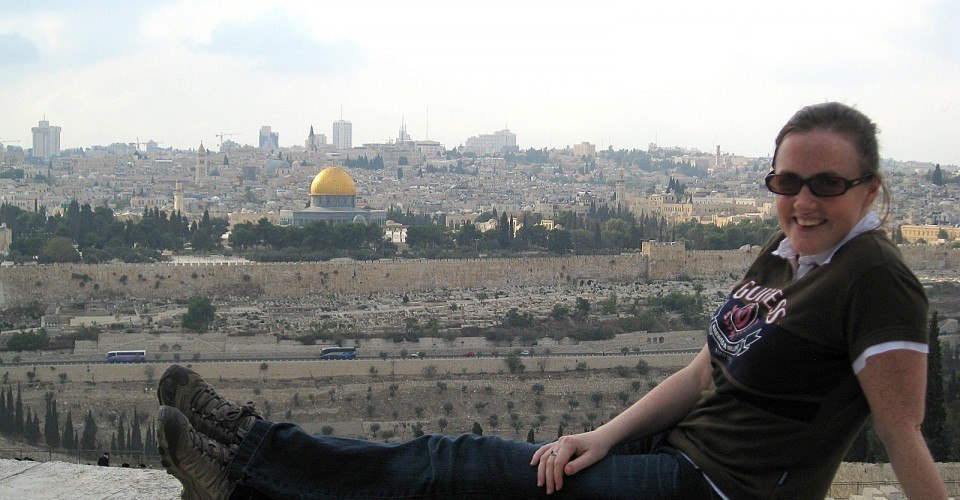 Big things have been happening at Where’s Sharon. Unless this is the first time you have looked at this site, I’m sure you can tell what. Yes, our family travel blog has a new home!

I have been working hard for the past couple of weeks building this new site. I was sick of my old site and the difficulties I was having with customising anything in my blogger hosted blog, so I decided it was time to make the big move to wordpress. I am very happy that I did!! My inner programmer has enjoyed getting back to having my own site and being able to tinker with whatever I like. Everything is still not perfect. It is hard to make sure all 900 of my existing posts look ok and do things like re-add the location, so you will have to forgive me if something doesn’t look quite right yet. I still can’t decide what to do with old posts that don’t really fit in here anymore now that I focus on family travel. I’d love to hear any suggestions.

One of the pluses of this process has been looking back over my old posts and trips.  It has been exciting. I have been very fortunate to have been able to make so many opportunities to see the world. I started thinking about all the random and wonderful experiences I have had, and I decided I would come up with a list of ten of my most amazing experiences while travelling the world.

I have seen so many of the big attractions in the world – Giza Pyramids, Inca Trail, Mt Everest, the Amazon, Taj Mahal, Angkor Wat, the Acropolis, the Eifel Tower, the list goes on and on. However, I find it’s usually not the big attractions that make the most amazing experiences. It’s generally the things I would never have heard of if I hadn’t ventured away from home. High expectations are hard to meet and, even when they are, they often aren’t as wonderful as when something unexpected happens.

Anyway, here are my top ten!

10. (The right) chicken bus in Guatemala

I think chicken buses often get a bad rap. Yes, you are usually squished in like a canned tuna, and no, it’s not fun if you’re wedged in standing, but when you get an ok seat where you can view the spectacle around you, there is no way that I would rather travel. I love the sights, colours, sounds and the action going on all around me. 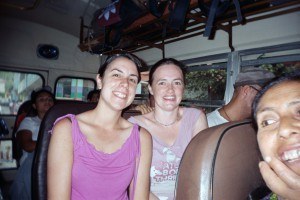 I generally have no interest in animals.  I’m not sure what this says about me, but what I do know is that I no longer feel this way about whales.  We were lucky enough to be in Puerto Madryn at the right time of year to view the great Southern Right Whales.  Such an amazing experience!  Having these giant mammals breach within touching distance with baby whales beside them was just breathtaking.  Read more about when we had a whale of a time.  Definitely an unmissable experience! 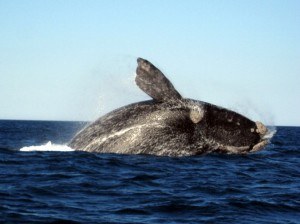 Magnificent Southern Right Whale off the coast of Argentina

8. Making the journey to Gallipoli, Turkey

This is a must do for every Australian. It was amazing to see all the places I had heard so much about growing up.  I have never felt so proud to be Australian which seems strange since I was nowhere near Australia, but anyway.  It also clearly illustrated the futility of war, while also showing the best of humanity, with both sides having memorials and showing respect to each other. 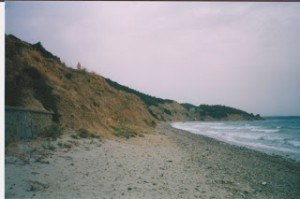 Anzac Cove, Gallipoli. I always imagined it would be much wider with much higher cliffs

7. Marrakesh Main Plaza as the sun sets in Morocco

Marrakesh Main Plaza has to be one of the best places in the world to people watch.  The evening we spent here watching the sun set was just amazing.  From our viewpoint slightly above the main plaza, we watched the locals, tourists, vendors, food stalls, buskers, snake charmers etc do their thing.  It is also fabulous during the day time, but it just came even more alive as the sun went down.  I definitely recommend a visit to magical Marrakesh. 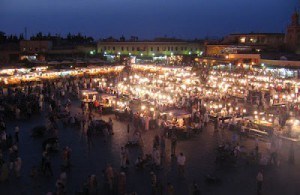 Marrakesh Main Square in the evening

6. Watching an international test match in the West Indies

I think many Australians dream of watching a test match in the West Indies, and it is well worth the effort. The infamous party stand is lots of fun and worth a look, but my favourite place to watch the match? In the stands with the locals. It was awesome enjoying the match with them, although it wasn’t quite as much fun on the last day when we won, and they were unhappy, but all part of the experience! You can read more about our experiences. I should add that generally I despise watching cricket and would have no interest in going, but it is definitely something special in this part of the world. 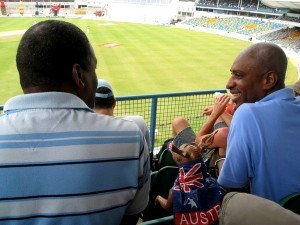 Our companion, Skippy, enjoys the test match with some locals

Cuba is definitely a country like no other.  Havana is one of the most picturesque cities in the world, partly because so much of it seems to be crumbling down.  A visit to Old Havana shows you a gorgeous old center which can nearly trick you into believing you are in Spain, except even in this beautiful, well kept interior, quite a few buildings look like they are crumbling away.  That is part of what makes it stand out from many beautiful old cities around the world.  The other parts are the beautiful old cars that are driving around, or the crazy way the people speak Spanish, or just the people in general!!  Cuba really is somewhere everyone should try to visit, the sooner the better.  Read more about my time in Old Havana. 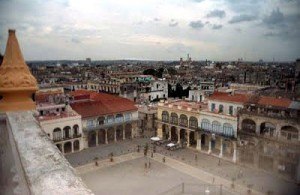 This is a pub crawl like no other – mainly because you do it in an inner tube down a river!!  Along the way, many wooden platform bars and clubs (yes I would call them clubs) line the river.  You never need go thirsty, as if there wasn’t a bar near you at that point in time, there was someone not far away with a long pole ready to pull you in to sell you a beer.  We even bought one beer from a lady on a pedestrian bridge who lowered the beer down in a basket!  It was so much fun, but alas, quite dangerous and has since been banned 🙁  This is probably a good thing, as I know at the end of it, I struggled to get out of the river and that was only in knee high water in dry season.

Vang Vieng was also an experience in other ways.  When we were there, the cafes were all full of spaced out backpackers watching Friends over and over again, well after the show was popular.  It was quite bizarre. 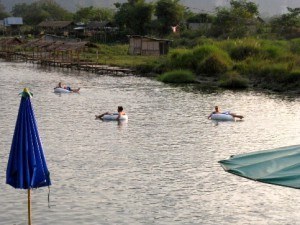 Some tubers make their way back into Vang Vieng

3. Being a pilgrim at the Golden Temple, Amristar, India

The Golden Temple is an amazing, spiritual place.  It is not just a beautiful large temple but also incorporates a whole complex with free accommodation and dining for visitors amongst other things.  I have never heard of anywhere else like it.  I didn’t enjoy the “free” accommodation (it was just too hot), but I did enjoy every second I spent by the Golden Temple itself, one of the most spiritual places I have been.  Besides which, it is definitely an experience to be a pilgrim for a night.

If the temple isn’t enough for you, there is also the nearby Pakistan border where you can watch the extravagant daily closing ceremony which is worth a mention in this list by itself! 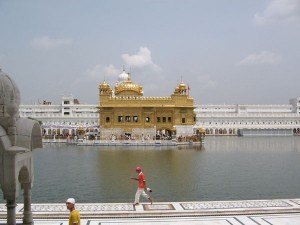 2. Walking though the old city in Jerusalem in Israel

I have been to many cities in the world, both old and new, and none are like Jerusalem.  It is easy to imagine that you are in the birthplace of humanity and religion.  The four old quarters are all amazing, and I literally felt like I walked back in time the instant I walked through the city gates.  The main landmarks, like the Wailing Wall, are well worth a visit, but just walking around the old city is priceless. 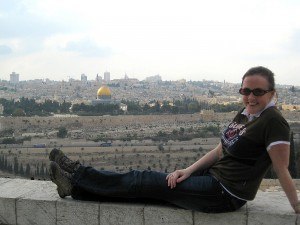 Looking over the Old City

1. Standing on the border between South and North Korea

The Cold War is still alive when you stand right on the most heavily armed border in the world. You can feel the tension as you look across to North Korea and stand in the UN buildings that straddle the border which technically places you as being in North Korea when you walk across the room. Adding to the atmosphere, North Korean soldiers watched us through the windows. There is nothing else like this experience in the world. Totally amazing as well as very unsettling. More about the North Korean border. 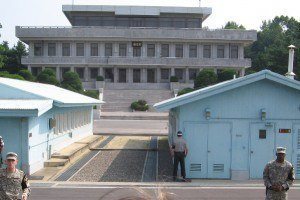 So, what do you think? Have you had any of these experiences? Do you want to?  What would you add?

Back to planning our family trip to the US and Dominican Republic!

Things to do in Melbourne: Food Precincts 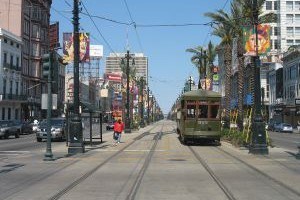 Back to planning our family trip to the US and Dominican Republic!

There is seven weeks to go today until we start our ten week trip to the US, Dominican Republic and Caribbean.  Whoo hoo!! It's...
Copyright 2013 Jupiter Premium Magazine Theme
Back to top