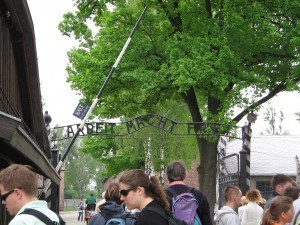 Work will lead to Freedom…

The train ride from Kosice, Slovakia to Krakow, Poland went as well as it could. It was pretty much empty so we managed to get our own compartment which was great. I’m glad we didn’t pay extra for sleepers as this meant we could lie down, and we didn’t have to worry about our things as we would hear anyone entering the compartment. I basically didn’t sleep at all though, and we were disturbed a few times by border officials and ticket inspectors

For once, our train arrived on time and it was when we didn’t really want it to. We bought our onward ticket to Prague which was a lot more expensive than we had expected. All this travelling around in Eastern Europe is giving our budget a big hit. We found our hostel and left our bags there for the day.

We had decided to spend the day at Oswiecim. This meant getting on another bus for a couple of hours but since our time in Krakow was limited, this seemed a better option than spending hours wandering the city when we just wanted to go to bed.

You might be wondering what is at Oswiecim but if I use the German name it will be all too familiar.

Auschwitz is the site of the largest concentration camp which was established in 1940 in the Polish army barracks. It grew to include two additional nearby camps, Birkenau and Monowitz. These death factories killed 1.1 million of the 1.3 million people (mostly Jews but also polish political prisoners, Gypsies, Russian POWs and other people from throughout Europe) who came through the doors. It is worth keeping in mind that the 200,000 people who did not die in Auschwitz did not necessarily survive the war. Many were transported to other concentration camps and would have still died. About 80% of people who entered these camps did not even survive long enough to have their names documented; they were “selected” to go straight to the gas chambers.

Most of these facts many of you may already know, but it is so completely different hearing them at the site. When I was in high school, I read all the personal accounts of Jews living in Europe during the Second World War I could get my hands on, and this was no preparation for being here. Each fact felt like I was hearing it for the first time, and it just felt so much more real at the site.

I was feeling hesitant on the bus on the way out there. You can’t help but want to do anything but visit the site of the most extensive human genocide in the history of humankind. In saying that, it is like visiting the killing fields in Cambodia or the various war sites i have been to around the world, we shouldn’t forget our past and I feel like I want to pay my respects and in some way feel that terrible things like this are not totally in vein if we learn not to ever let them happen again.

After we arrived, we signed up for the English documentary made from Russian footage when they liberated the camp in 1945. We then had a 3.5 hour tour of Auschwitz and Birkenau. The tour was incredibly rushed, as they just have so much to see and hear. Auschwitz had 12 of the remaining buildings turned into museum rooms (much of the camps had been burnt by the Germans before fleeing). One of the more shocking buildings had tiny spaces they would use to basically torture people to death. They would put 4 people in a tiny enclosed space (with only room to stand) and no light every night and make them still work their 11 hour days until they passed away. They would only last a few days.

I guess the worst part was just seeing the many photos of people that were inmates of the camp and how long they were in there for. Not many people lasted more than a couple of months.

When we visited the gas chamber in Auschwitz, the tour guide even had tears in her eyes, if that is some sort of indication of what this place does to you. 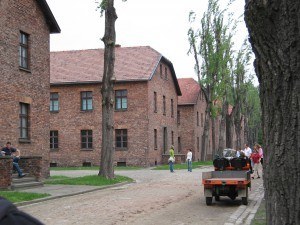 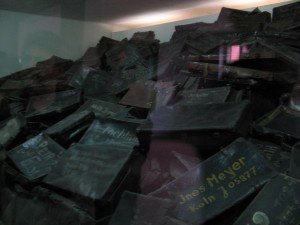 Suitcases Jewish victims never got to return to

After this, we had a short bus trip to Birkenau. This was by far the biggest camp and could hold up to 200,000 prisoners. It is massive and the photo I have posted here come no where close to illustrate it. There are buildings off in all directions. There were 5 gas chambers here and this is where most people died. They could kill up to 8000 people a day in these gas chambers. These were destroyed by the fleeing Germans (the last one only the day before the Russians arrived) so only the ruins remain. There is a memorial though. We also saw a bunkhouse here. It is unbelievable to think there would up to 10 people on each bed of each of the 3 levels of the bunks. 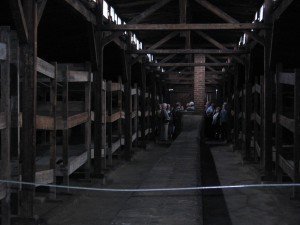 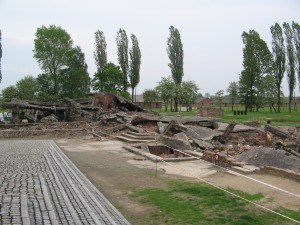 Remains of gas chamber in Birkenau

Anyway, I could go on and on with facts that we learned today, but you probably already know a lot of those yourselves. What I can tell you is that no documentary or book can make you feel the same way that walking through the doors of the place.

While doing the tour, I felt like I was being assaulted, each new fact like a punch in the stomach. At the same time though, a sense of unrealism does exist. It is just simply too much to swallow. How could people do such things? I have been to Dachau concentration camp in Germany previously but it just simply does not compare with the size and terror of Auschwitz. As much as it is something I don’t want to do ever again I think it is something everyone must do.

Read about our time in Krakow and the other experiences we have had in Poland.