I woke up about 3:45am and didn’t go back to sleep. not really how I wanted to start a big day of travel, particularly as I had had problems sleeping the night before but I guess not surprising. it was a big couple of days with finding out that we were having a baby boy the day before and then our first international trip as a family.

Our flight was at noon, so we decided to leave about 9am.  in some ways this was good, it meant to rushing around that morning (as we had packed the day before), but it also meant that S wouldn’t have time for a nap before we left. this worried us as she doesn’t sleep anywhere but her cot.  How we were all going to cope if she didn’t have a nap was scary.  It was an exciting morning though. All three of us seemed to wake up extra excited and were just feeding off each other.

Anyway, we went to the airport. we tried a different long term parking place that went really well and were soon checking in for our flight with Jetstar – phuket via Singapore. We asked if we could have a spare seat for S and it didn’t seem that it was problem. We were worried by the amount of luggage we had, but went in a fair bit under.  This is probably one of my least favourite aspects of travelling with a kid. I’m so used to travelling ultra light and I hate having a big full suitcase. It is frustrating that we now carry more hand luggage than we used to take in luggage in total, even for a year of travelling!

Our time at Melbourne airport was fine, although I hated the new configuration and the lack of eating options. We happened to stumble upon a little kids play area and that was awesome!  That kept S occupied the rest of the time we were there and was a nice quiet corner for us too.

We were one of the last to our gate and to board as we expected to hear a boarding announcement which didn’t come.  We were VERY happy to find that we had been allocated a whole row of four! yay!  the plane was reasonably empty though and we could have even spread out to another row of four except it was in the middle section and we really needed one of us at each end of the section to keep S contained.

The flight could have been worse and it could have been better. We were on it for  a bit over eight hours and S spent a fair amount of that screaming.  She was ok to start with, despite being very tried. She’d basically run across the seats between us making sure she had both our undivided attention. After an hour and a half of that, she passed out for an hour. I even laid down across three seats in the row in front of us.  After this though, she was hard work.  She pretty much screamed a fair bit of the rest of the journey. She was just so tired.  The books and toys we bought on the plane were a waste of time.  She loved playing with an empty water bottle and lid and was entertained by a portable dvd played for about 40 minutes, but that was it.  Everyone around us pretty much spent the rest of the flight staring at us, but what could we have done? She needed more sleep and despite our best efforts, we couldn’t get it to happen.  We are a bit worried how we will cope on the way home when we wont be lucky enough to have a set of four, although at least we have bought a seat for her so

It was a relief to get to Singapore and kind of a shock to be out of the country again after two years.  Singapore airport was great. Plenty to keep S entertained and she was happy being carried around or pushed around on the free strollers that were available.  Josh took her for a shower and they enjoyed that too.

Our flight onward to Phuket departed about 3.5 hours later.  It was a full flight which was a bit painful for us. We decided to board at the beginning when they offer boarding for families with small children as we were worried by all the people and we had lots of hand luggage so didn’t want to be stuck with at our feet. Not sure it would have fit anyway.  People were rude and it was incredibly difficult to get onboard. They were too busy making sure they were first once they did a general boarding call.  I have never understood people being keen to board – I generally try to be as late as possible and these people really annoyed me. Some consideration to a pregnant woman and a one year old would be nice!!!

Once we were on board we had a hard time getting organised and settled because people were so pushy too.  S was screaming her head off to start with, but FINALLY (and thankfully!) she went to sleep and slept most of the 1.75 hour flight! yay! except when some people in front of us got up and pushed her around and were generally very rude.  I was surprised by people on this flight as you do hear how welcoming Asian countries are in general to children and everyone in Singapore airport had been showing her special attention.

The flight was uneventful and soon enough we were landing in phuket! yippee!!  it was about 9:30pm local time or 1:30am Melbourne time.  Airport formalities were super fast.  S’s passport got its first stamp and she even got photographed by immigration. thankfully, she behaved for it!

The taxi situation out the front was a bit of a mess and when we tried to get a metered taxi we were told that there was no more.  It seemed like quite a farce.  We negotiated with someone standing near by to drive us which seemed a bit dodgy, but it wasn’t worth mucking around.  Josh wanted to negotiate a bit harder, but I reminded him we weren’t backpackers anymore, just a very tired family and to take the price.

It was a 45ish minute drive to Kata, where we were staying.  It seemed to take forever, but it was pretty quick for the distance as roads were pretty empty.  Hotel check in was all smooth and we were soon in our room! yay! we were relieved to find a cot waiting for us, although it didn’t have a cot mattress, just folded up doona covers… strange, but it seemed to do the job, and we weren’t in the mood for complaining.  straight to bed for all of us. 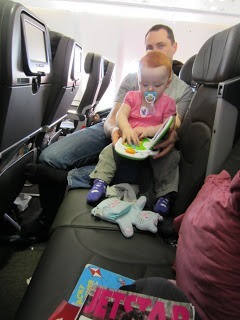 Our set up on the plane 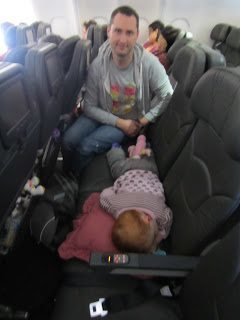 The best hour of our 18 hour journey