Flying home from Penang with a toddler

13 November, 2011
This post may contain compensated links. Find more info in my disclaimer. 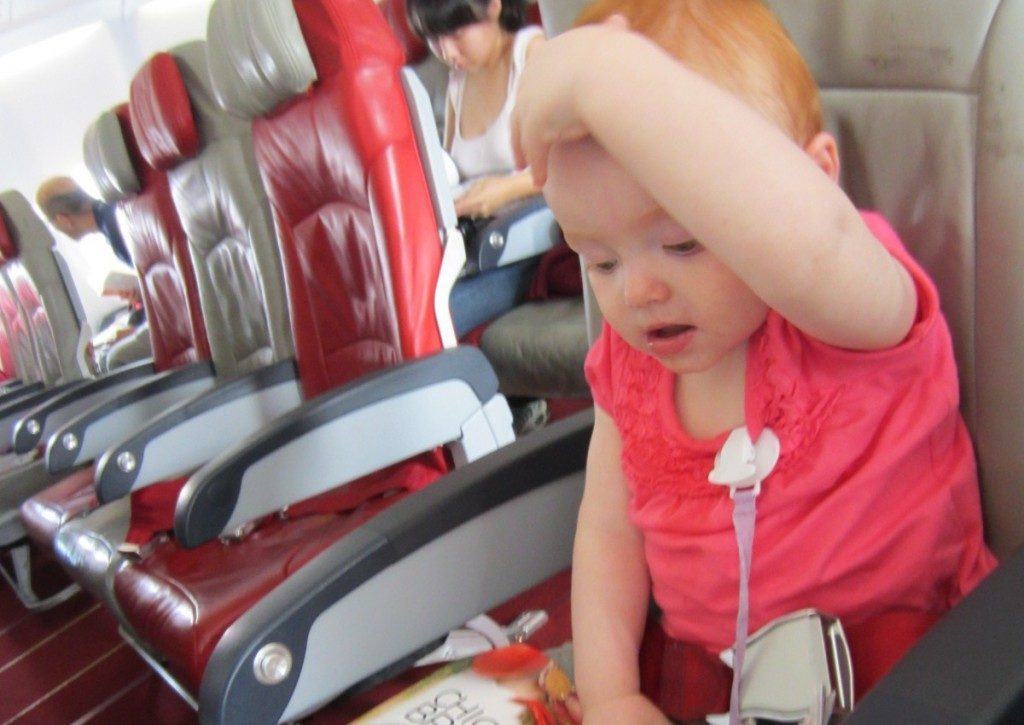 We were up at 6:30 to get to Penang airport for our first flight of the day.  It all went smoothly until a bit of frustration checking in for our Air Asia flight to Kuala Lumpar.  The lines were all a mess at the airport, lots of people pushed in and it seemed to take forever.  When we had tried to check in for this flight online, it had put S in a seat separate to us, so we had waited to check in until the airport.  This was a bit of a waste of time as they still kept her separate to us (we had bought S her own seat for the journey home).  How bloody stupid is that. Like a one year old can sit by themselves. I asked them to change it, and the guy tried to tell me they were actually together and then said it was all randomly assigned and nothing he could do and to try and get someone to switch once onboard.

This wasn’t completely unexpected.  Once I had seen the online check in thing assign us different seats, I had googled it and found quite a lot of people complaining online about not being seated with their young children.  What a ridiculous practice.

We weren’t happy, but we were soon on the plane.  I have caught lots of Air Asia flights and they have all been late – until this one!  We were extra happy about this as we had only realised two days previous that they had pushed back our flight time by 40 minutes without informing us.  We were catching a flight back to Melbourne from KL so we couldn’t afford anything to go wrong.  Anyway, we were one of the last to board, no one was sitting in the seat next to the seats Josh and I had been assigned so we just sat in them anyway.  Made me even madder that they hadn’t assigned us seats together when there was a spare anyway!!!

We got to KL ahead of schedule and were soon wandering around the terminal.  We checked in fine here using their kiosks and baggage drop off as the check in desk for the flight wasn’t open yet.  After reading the reviews online about how families can be separated on their flights, we had paid for a seat assignment on this one, so it was all good.

We hung out in a food court area for awhile, taking turns following S as she walked around.  By the end of our time here, she was totally exhausted and way past needing a nap.  We hoped this would mean a good sleep on the plane, but it was hard to imagine that we could be that lucky after the painful flight over.

After lunch, we went through immigration and security and were soon boarding our plane.  A second air Asia flight for me that wasn’t late!!  I had chosen our seats at the back of the plane as when I flew Air Asia a couple of years ago, I noted that they assign people who haven’t paid for a seat from the front working back, so if the plane isn’t full, all the empty seats are at the back.  This tactic paid off!  The back section of the plane had hardly anyone, so S and I took the three seats by the window that we had paid for and Josh took another row of three in front of us.  Score!  The seats around us were all empty until others moved around.  I highly recommend people pay the money if they are flying Air Asia long haul and reserve themselves seats at the back.  It was a bit annoying that we had paid for the seats really as we could have just sat here and that we had paid extra for S, but the peace of mind had been worth it.

Actually the flights today show how silly infant pricing can be.  In Australia on domestic flights, infants are free if they sit on your lap.  This isn’t the case everywhere.  The flight Penang-KL actually cost slightly less to buy S her own seat than to have her on our lap!!  The KL-Melbourne flight was only $100 more expensive to buy S a seat.  Money that I am sure would have been well spent if we hadn’t scored on the seat front.

S loved having her own seat.  There was a bit of drama on take off when she spilt a whole heap of water on herself, but otherwise the start of the flight wasn’t that painful.  About an hour after take off, we had her sleeping across two seats and we both got to take it easy.  Thankfully, this time it lasted a bit longer than the one hour nap on the way over.

The whole thing was pretty painless until the last half hour when we hit some turbulence and started our descent.  poor little S was sitting there quietly hugging her doll close when she started power chucking.  It was a massive amount.  I changed her into spare clothes we had after trying to wipe it up as best I could (so clumpy, it was disgusting) but then she kept chucking and just seemed unable to stop.  The poor little darling. It was so horrible, she was drenched in it, we didn’t have any other clothes and I couldn’t even give her a proper hug.  It was lucky that I hadn’t put her on my lap with the infant seatbelt as we have usually done.  I used a bunny rug we had there to try to keep her clean and for her to vomit on.  It was so gross I left it on the plane.

She seemed okish by the time we landed but had to have her with basically no clothes on in the middle of the night until we could get to our bags.  Our bags came out just about last, so it was a long wait.  Customs had a massive long line by then, so it was another long wait.  They had changed how they do some of that since last time I went international, and it was painful.

We finally get out and ring car parking place to come and get us.  It turns out they expected us the next night. They said there was a bus there waiting, but it took off just as we got there! we ended up waiting thirty minutes for it to come back.  not happy.  S wasn’t dressed in very warm clothes as we only took warm clothes for the plane and they were all covered in vomit.  It started to feel like the night would never end!  Thankfully, it did of course and we were home soon enough.

It had been a great week and a bit. I was very sad to be home. I had liked both destinations, but I probably preferred Penang just because I’m not really a beach resort destination person.  I had also found my travel with a baby travel groove by then.

Practical Information:
Penang – KL, Air Asia RM300 for the three of us including a seat for S and 2 x bags.  About 50 minutes

My tips for travelling overseas with a toddler