Finishing up in Thailand

Our final day and a half in Phuket was as awesome as the first four days.

Thursday didn’t start out quite as great as we weren’t able to sleep as well in our new room as it was louder (and there seemed to be nocturnal elephants staying upstairs), and I think the cot (more like bassinet) that S was sleeping in was quite uncomfortable for her so she slept more like she does at home (which isn’t that great), rather than the great sleeping she had been doing in Kata.  In other news, it was a bit of a milestone day – 20 weeks today!!

We didn’t have breakfast included at this hotel, so we bought their breakfast. It wasn’t that flash, but there wasn’t really any other options in this little part of the island.  The attention and care shown to S was fantastic though and there were a couple of dogs around that kept her entertained, so it was worth it.

After breakfast, Josh and S set out for the beach across the road while I went for a little walk.  This beach is fairly narrow and, although it looked calmer, had stronger currents that in Kata.  S wasn’t as fond of it, but she still enjoyed it. 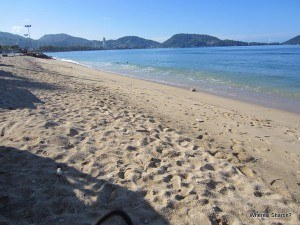 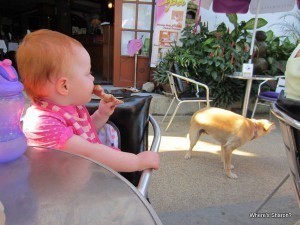 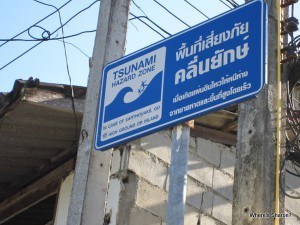 I went for a bit of a walk by myself which was a nice change!  The best part about being somewhere not so touristy is that it’s very easy to get away from the touristy parts.  I only had to walk 10m from the hotel to be around locals living in tin shacks.  Nothing like that to help put things into perspective.  There are lots of tsunami warning signs around (see pic!), and I haven’t been able to help but wonder while I have been here which parts were most affected by the 2004 tsunami.  I was supposed to come here in March 2005 actually, but ended up going elsewhere as I was coming here to dive, and I was worried about what I might find.

After S’s morning nap (in which Josh had another massage), we headed back into Patong.  It wasn’t as crazy during the day, but it was still pretty crazy!  We checked out the beach quickly – it was nice but chock a block with people and stuff and not nearly as good as Kata for a good beach spot for a family, due to all the people and action. I also preferred Kata beach as it is surrounded by trees which means there is a lot of shade. 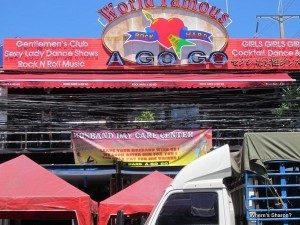 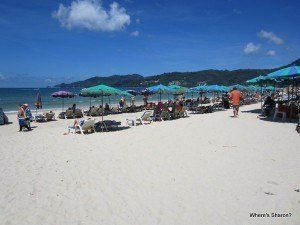 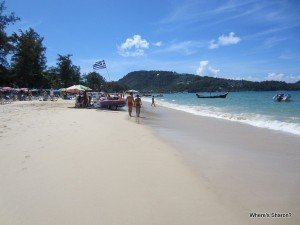 We walked around town a bit and back into the shopping center.  We weren’t really interested in shopping and didn’t buy anything (although we had bought S some cheap sandals the night before which were driving us crazy – we didn’t realise that they would squeak whenever stepped on!).  Found a “husband day care” (pic attached).  I don’t think I will be leaving my husband there!  Lunch was good and S was thoroughly entertained by all the staff of the establishment when they didn’t need to be serving people.  She has started being less shy about it now and is even blowing kisses to people who show her attention. I am a bit jealous as she has only ever blown me one kiss!!

I took the afternoon easy while S slept. I wasn’t feeling all that great and been getting a lot of Braxton hicks contractions which have been worrying me a bit.  We had dinner in Kalim.  A great Thai feast for our last night in Thailand.  We then had a bit of a wonder around.  It is very pretty watching the sunset over the water and once we got back to our room we left the curtains open for awhile so we could keep watching the great views.  Later on in the evening, we also saw some big fireworks over Patong from our room. 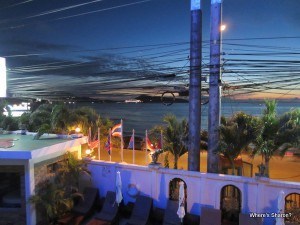 Sunset from our room

The next morning was pretty cruisey as we were flying to Penang that afternoon.  So it was spent getting our laundry, packing and trying to get S tired out so she’d have her morning nap a bit early as we had to check out at 11. Lunch beforehand was a bit stressful as it took 45 minutes to come out which left us with less than 10 minutes to stuff our faces (hard for a 1yo) before rushing back to our hotel to get a taxi to the airport.

The taxi to the airport was a nice ride.  We drove past a few of the beach areas north of Kalim which were interesting to check out, if only from a taxi window.  Phuket Airport was a bit crazy one arrival as there were massive queues out the front to get in as they were scanning everyone’s luggage.  This wouldn’t have been such a big deal, but we weren’t even convinced we were at the right terminal, and there wasn’t proper information to tell us.

Eventually, we got in and thankfully, it was all good.  No one was at our check in desk as we were soon checked in for our flight on Firefly to Penang.  I had never even heard of this airline before, but they were the only airline to fly directly between Phuket and Penang, and there prices weren’t bad given this, so we were giving them a go!

We spent our remaining Thai baht on drinks at the airport and let S wander around while we waited on our flight.  It was all on time and soon we were walking bussing across the tarmac to our small plane.  It was nowhere near full so once we had our seats and everyone was boarded, Josh and S moved to an empty 2 seats (plane configuration was two on each side).  So we were lucky enough to have plenty of room again.

The flight was quite uneventful.  S was happy to have her seat to play on.  I was actually able to read, and we were soon there, ahead of schedule!

Practical Information
taxi to airport 600 baht, Firefly flight Phuket – Penang, about an hour, 539 baht for 2 adults and an infant in total.