The taxi ride to our next hotel, the Orchid Hotel and Spa in Kalim beach was a nice trip.  It went via Karon and Patong so we got to see some other popular parts of the island as well as popular beaches.  Karon was another place I had thought about us staying.  The beach was a lot wider than Kata but everything looked more spread out facility wise and that would have been annoying so I think Kata was the right choice for us.

Patong was chock a block full of stuff and seemed like quite a different place to Kata, although not necessarily in a bad way.  Patong is what people generally think of, if they think of Phuket, I think.  It is the most touristic, loudest, outgoing part and meant to put the sex industry quite on show (we haven’t even noticed any sex workers in Kata).

Kalim is at the northern end of Patong and we will use it as a base to see more.  Kalim itself doesn’t have much.  Some hotels, a teeny beach and a few restaurants and other things that tourists need.  I had thought that our hotel would be a little bit closer to Patong, but unfortunately not. It will require tuk tuk journeys rather than being able to walk.

We ended up here as the resort we were staying at had some festival celebration happening the following night which was compulsory and it meant having to pay an extra $70 for that night for a dinner and show that we weren’t going to be able to see as it would be too late for S.  This gave us an incentive to try somewhere else and I’m glad.  The expense and hassle of transport around Phuket does make it kind of easier to just change hotels to view different parts.

The Orchid Hotel and Spa has nothing on our last hotel but does seem good.  It is sooo much cheaper as I got a ridiculous deal on the Air Asia site which meant that we paid $31 for two nights.  The room is probably better than what we had as it has a living area bit.  Unfortunately, the cot they have given us must be for Thai sized babies and isn’t really big enough for tall S but so far it is working out ok, although she isn’t sleeping nearly as well.  She needs to be supervised in it!  The hotel is directly across from the beach and we can see it from our hotel room. It’s also right on a main road, so it is louder than our previous hotel.  It only has one pool and restaurant too. What a hard ship!  It had excellent reviews on trip advisor which is why we are here.

The owner of the hotel is a British guy and he was very welcoming when we got here.  We were soon checked in and off for lunch at a local place. It was a bit on the pricey side but we didn’t have many options.  As always, everyone is gooing and gahing over S.  We got stuck in a sudden downpour on the short walk back to the hotel and were totally drenched. oh well.  S thought it was hilarious!! 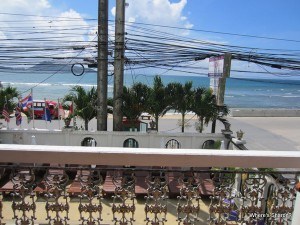 View of Kalim beach from our hotel room

After an afternoon nap, it was into Patong.  It was a short tuk tuk ride away and we got dropped off in the center of town and omg what a center it was.  The ride through town earlier did nothing to prepare us for the sight we saw.  In fact all the travel I have done did nothing either. This place certainly seems unique!  It was just so big, loud, packed full of people and a bit over the top.  It was like Kuta in Bali on drugs, and really as much as I have been comparing Phuket to Bali during this trip, Patong has not even a close rival on Bali.  It was maybe more of a cross between Bali, the rest of Thailand I have been to before, Vegas and maybe a touch of the more party oriented Greek Islands.  The photos really don’t capture it.  Anyway, it is unique.

The Lonely Planet describes Patong as a must see destination even if it’s not the type of place that is your cup of tea.  I have to agree.  I am happy to not be staying right there, but it was certainly an interesting place to check out.  Josh and I pretty much walked around in shock when we first got there. It was such a contrast to sleepy little Kata (which I didn’t think of as sleepy until this point) that I think we had a little bit of culture shock! It was hard to find somewhere to have dinner while the lights were blinding us!  There are fancy, full on looking bars and clubs everywhere as well as restaurants, food stands and shops.  We also stumbled upon a strip of lady boys selling private “massages”, although that was all we saw of the sex industry. They were lovely and were all gooing over S. 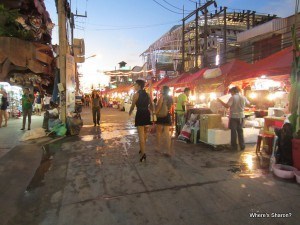 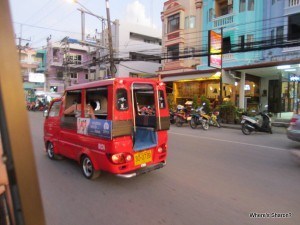 There were also quite a few party tuk tuks! Some had coloured lights, flashing lights and massive speakers with music booming out and usually a crowd of drunk people in them drinking beer!

We went in a massive shopping center and even this had to have something a bit different – a massive “lake” with big fountains and a big ship!

So yeah it was quite full on, but I didn’t find it full on in a bad way. Plenty of all types of people in the streets. I didn’t feel at all threatened and found it all very entertaining.  We didn’t even see the actual beach although it looked quite nice when we drove through there during the day.  We plan to go back for a day time trip but that’ll do us.

Practical Information
Orchid Hotel and Spa – http://www.theorchidhotel-phuket.com/
We got an awesome deal on the Air Asia site which was two nights for price of one and they were selling it for only $31!!
Taxi from Kata to Kalim – 500 baht, 15 minutes
Tuk tuks between Patong and Kalim – 200 baht each way about 10 minutes in the evening (lots of traffic).