9 April, 2013
This post may contain compensated links. Find more info in my disclaimer.

The journey from Taipei was not that bad.  We had a 4.5 hour flight on Air Asia X to Kuala Lumpur, and then another hour onto Singapore.  The longer flight departed on time and went quickly.  It was a nice big plane which made it less painful especially as we managed to snag 2 x 2 seat rows.  We had to be pretty quick and on the ball though as the flight was just about full.  J and I are old hands at nabbing the maximum amount of seats possible!!  There was a fair bit of aisle space next to me and S, so she helped the flight go more quickly by putting on a ballet performance, inspired by Angelina Ballerina. 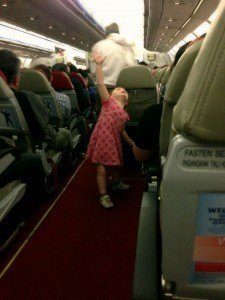 S-ina ballerina entertains the masses on our KL flight

S did stress me out a bit with two toilet accidents.  I then had to resort to an emergency nappy I keep on me which of course broke as it is too small for her, despite being the biggest one I have found in Asia.  The joys of being a travelling parent!!

It was only when I was sitting on this flight, that I realised I had probably been a bit keen booking our onward flight to Taipei only two hours after we were due to land.  It was one of the last flights for the night though, so it was either go then, or spend the night in KL and you all know how well that went when we tried that last time!!  However, with the two little ones, it can take us awhile to navigate all the walking and lines in airports, and we needed to go through immigration and customs and then check in again.

Luckily, we landed on time.  S and Z decided to both make loud lion noises while we were lining up for immigration and we got rushed to the front!!  We will have to try that trick again in future!  Our luggage took ages, but thankfully there were not many people in the check in area for our next flight, and it all went smoothly apart from one problem.  Z wet through while I was carrying him in the carrier.  Lovely!  Both me and the carrier were all wet too.  I’m not sure what was worse, being stuck in wee clothes or then having to carry Z around without the carrier while he tantrumed (and he is over 12kg so heavy, especially while flinging his body about) and pushing a pram with S in it at the same time.  Lucky for me that I already have massive mummy muscles thanks to having had an even bigger child the first time around!!

While we were waiting for our flight, a flight for Melbourne departed.  It was so strange to be around so many Australians after barely even seeing a non Asian person for the last few weeks, let alone an Australian.

The flight to Singapore departed slightly earlier than its scheduled 10:40pm and went very fast, especially because S and Z actually fell asleep immediately.  Getting off the plane was more painful.  The kids were so tired that they lost it.  I felt so sorry for them, especially S.  She needed lots of hugs and for us to carry her, but she is just so heavy.  I was very very glad when for the first time this trip, we found our pram waiting for us in the air bridge.

Singapore airport was ultra fast, and thankfully we were on our way to our hotel in a taxi not long after.  Soon enough we were happy to find ourselves in a lovely, decent sized hotel room going to bed.

Practical Information
Taipei – KL is about 4.5 hours on Air Asia X.  Our original tickets cost about $600 for the four of us, but it was one of the few tickets that I didn’t buy on sale.
Taxi to hotel near MRT Bugis was SG$26