A review of the amazing Universal Studios Singapore

I must admit, I was nervous about visiting Universal Studios with my four year old. It sounded awesome, but after our bad experience in Disney World last November, I was worried it would just end in disappointment.  I am so glad I pushed these fears aside and gave it a chance – we had one of our best days ever! 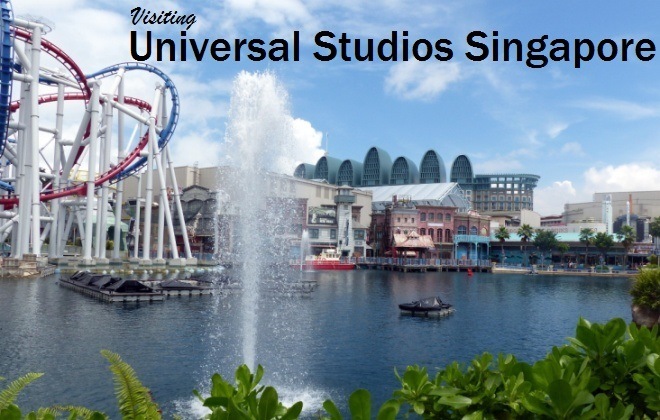 Universal Studios Singapore opened in 2010.  It is part of the Resorts World Sentosa complex on Sentosa Island (read our full guide here).  The park consists of 7 themed zones – Madagascar, Far Far Away (Shrek theme), The Lost World, Ancient Egypt (including The Mummy), Sci-Fi City (including Transformers) and New York (including Sesame Street).

Each themed zone has its own attractions, shopping, eating establishments and street entertainment around the theme.  There were rides, street performances, live shows and movie characters.  Some of these are available in other theme parks – I have seen the WaterWorld show before in Queensland as well as the Shrek 4-D Adventure, but the majority were purpose built for Universal Studios Singapore.  There are no real sets to explore, like the Universal Studios in LA (which I have visited), but there is the WaterWorld show which shows stunt stars in action and a sound stage with special effects where you can experience a hurricane in New York.

Our review of the Universal Studios Singapore 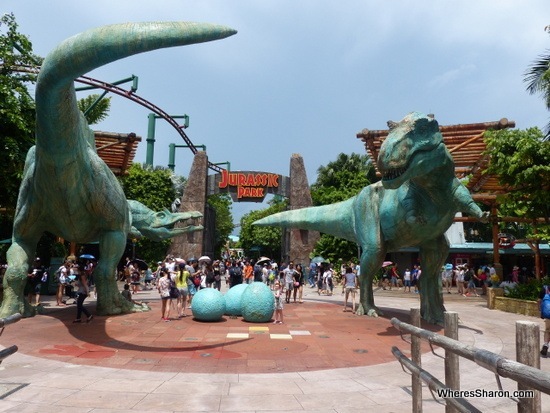 It is a good sized park with the number of attractions making it perfect for a full day visit.  We managed to get around them all.  The only thing we missed was the Revenge of the Mummy ride as it had a 122cm minimum height and S is just under that.  She was allowed on everything else.  Kids under 122cm usually have to be accompanied by an adult though which is fine with us.  Here is a quick review of each of the themed zones…

We actually watched Madagascar right before we left because of this attraction! Not that you need to be familiar with the movie to enjoy this area. This area is great for the young ones as the attractions are best suited for younger kids. There are two attractions – one takes you on a raft ride to and through Madagascar with the characters from the movie.  The other is a big carousel.  Both were a hit with us. There are regular times to meet the characters from Madagascar, and you can pose for photos. 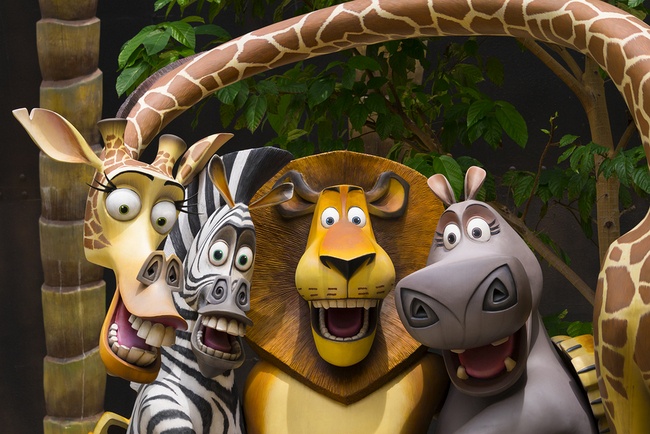 This area was mostly about Shrek with a “live” show with the donkey and Shrek’s 4-D Adventure.  S absolutely loved this 4-D show, especially when the donkey kept sneezing on us and we would get covered in water.  There is also a cute little ferris wheel and a great kids roller coaster. 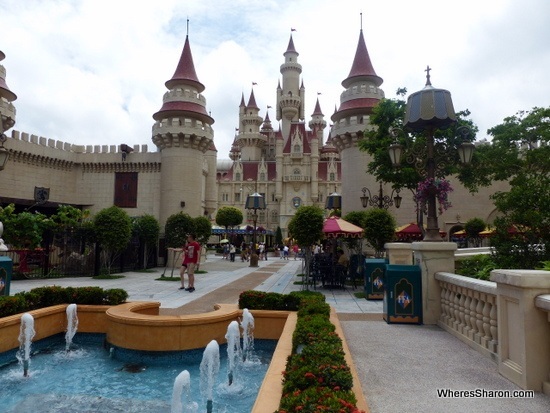 This Jurassic themed land is probably the most fun with five great attractions including the WaterWorld live stunt show.  We loved the three rides. They included a suspended roller coaster which was a huge hit (although very short), flying on prehistoric birds and the biggest hit of the day, the Jurassic Park Rapids Adventure which saw us get very very wet on a river raft ride. It was so lovely to get a nice soak to cool down as it was quite hot. 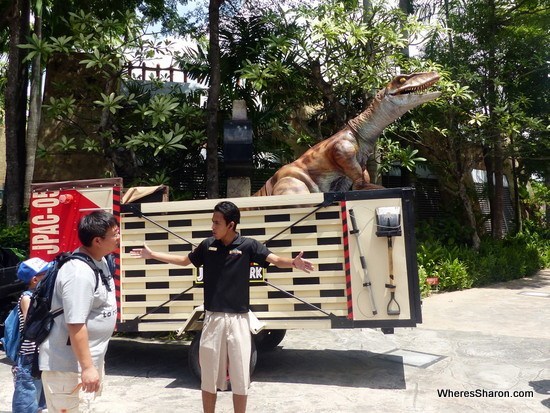 Another cool part was a “street performer” we ran into.  The dinosaur above.  It seemed quite real in the back of the truck as it interacted with people around it. 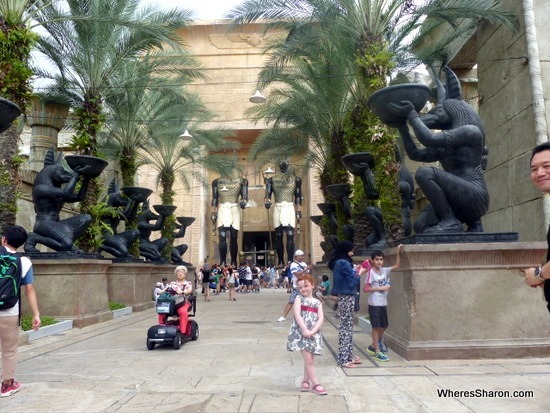 This zone had some very cool architecture and a cute jeep ride.  S loved “driving” the jeep, especially when she was given a license at the end of it! The Revenge of the Mummy ride is here.  There were some interesting Egyptian themed characters around this zone too.

This zone has one of the best attractions at Universal Studios Singapore – the Transformers ride.  This “ultimate 3D battle” is truly amazing even for someone like me who has never seen a transformers movie.  There is also a spinning cups like ride which we enjoyed.

This zone looks fabulous and we were lucky enough to arrive right on time to see some great street dancing.  There is also a special effects show where we experienced a hurricane and a Sesame Street ride which was great.  Additionally, there is a live Sesame Street stage show.

The park starts and finishes in Hollywood which seems fitting.  This area is mostly about shopping but there is also a live rock show full of monsters such as Dracula and Frankenstein.

The best parts would be our two favourite rides – the Jurassic Park River Rapids and TRANSFORMERS The Ride: The Ultimate 3D Battle.  The river rapids was a longer ride and we loved getting splashed.  S was ecstatic when she ended up drenched!  The others in our raft did not get quite as wet, so it is a bit random who ends up very wet.

The transformers ride was just unbelievable.  I spent the ride with my mouth wide open I was so amazed by how good it was.  It felt like we were flying around a city involved in some battle with big robot things.  I loved it.  I loved how the theme continued when the ride finished too – the ride attendant cheered and thanked us for saving the world.

It was also great to have the express pass (more about this below) which meant we didn’t have to line up for long at every ride.  This definitely made the whole experience so much more enjoyable. 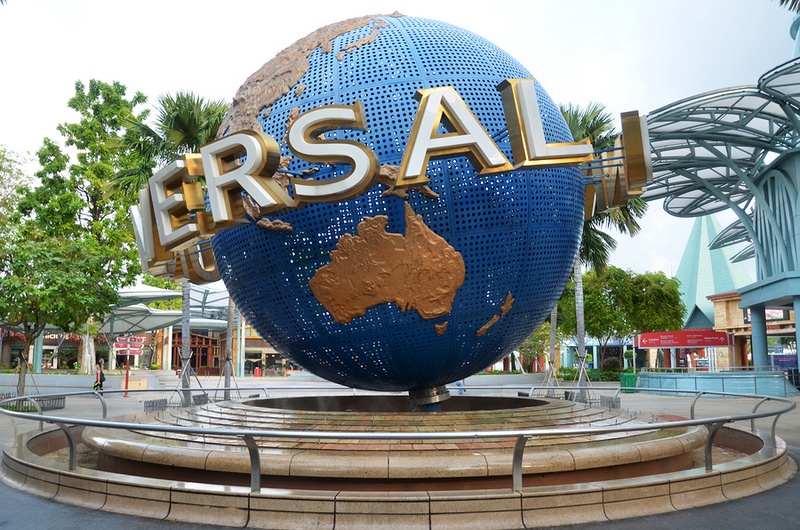 The worst part would have to be the crowds, although they were not so bad and as good as you can hope for at such a major attraction.  They definitely had nothing on what we experienced on Disney World.  We went on a Monday, but it still was quite busy.  Wait times on rides were up to 105 minutes if you didn’t have an express pass.  The less popular ones were around the 30 minute mark generally. The line to get in was a bit frustrating. It took us 20 minutes to get in even with tickets.

My only other complaint was that I couldn’t find a way to find out all of the show times without actually visiting the site of the show.  It would have been good if these were in the brochure with the map we got on arrival.  We sometimes just missed out on shows and we would have made it to the location earlier had we known.

I really can’t recommend the express pass enough.  This is an additional cost on top of the entry price but it is so so so so so worth it if you have young kids.  It is no doubt a big part of the reason why we enjoyed Universal Studios Singapore so much.

S does not have the patience to wait in line for long – even when we waited just ten minutes she would spend a lot of that time whining and driving us both crazy. The express pass at least minimised this.  The most we waited at any attraction was 20 minutes (and that was the one with 105 minute wait time), and many times we got straight on.  It was truly amazing and I recommend it.

You should definitely budget a whole day to visit Universal Studios Singapore.  We arrived just after the opening time of 10am and we left at 5:30pm.  This is the longest day S has ever done anywhere but she wanted to stay for longer and do her favourite things again!  It was that enjoyable for her.

I recommend buying tickets beforehand to save money and time. Klook offers discounted tickets – when I last checked the tickets were over 15% off the normal prices. Click here to see the latest prices.

As you would have already gathered, she loved it.  She loved all of it.  She even loved things like the transformers ride which we nearly didn’t do after the 4D ride elsewhere on Sentosa Island terrified her.  She usually is very easily scared and very cautious, so I think it says a lot about how much she enjoyed the whole park that she was able to relax and have fun with some of the scarier attractions. 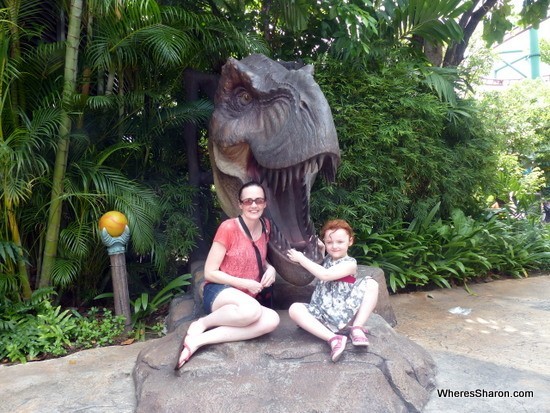 Hanging with a dinosaur

I loved it as well.  The park is perfect for younger kids as there are many attractions aimed right at them.  In fact, it may be harder with older kids as there was a distinct lack of thrilling rides – although it looked like that is about to change as there is a massive Battlestar Galactica roller coaster sitting there that looked nearly finished and another roller coaster under construction.

I loved all the quality time we had together, and I enjoyed all the rides as well, especially the transformers ride which had me a bit spellbound.  I do not hesitate to recommend Universal Studios Singapore to others, and I am sure we will return at some point so Z can experience this fabulous place as well.

Heading to Japan? You can read about Universal Studios Osaka here.

We were guests of Resorts World Sentosa.  As always, my views are my own.

Ready to book your next trip to Universal Studios Singapore?