I have read some discussions about whether it is worth visiting Disney world with toddlers/young kids and I thought I would share my opinion and recent experience.

I had always been surprised by discussions on this topic, as I thought it was a no brainer.  Of course it would be worth it.  If you could afford it, why wouldn’t you go? I have been to LA’s Disneyland and Tokyo’s Disneyland and both were awesome. I agreed that they were the happiest places on earth, and I looked forward to taking my own kids.  Unfortunately, when I finally had the opportunity to do this, it didn’t live up to what I imagined. At all.

At the time we went, my son, Z, was 20 months old and my daughter was 3.5 years old to the day.  We actually decided to leave Z at home with J.  Under twos are free, but he still needs to nap and I was worried he would get so grumpy that he would ruin the day for all of us.  The entry price is so high, that I couldn’t justify a half day visit. This was a wise decision.  Not so much because of the sleep, but because I don’t see how he would have enjoyed it.  He would have hated being strapped to us all day in the carrier, he wants to walk.  This would not have been possible, because it was just so crowded, we would have lost him in an instant.  It would definitely not be worth visiting Disney World with this toddler.

Disney World is very pricey, so we decided to just go to Magic Kingdom.  All my experiences below are related to our visit there. 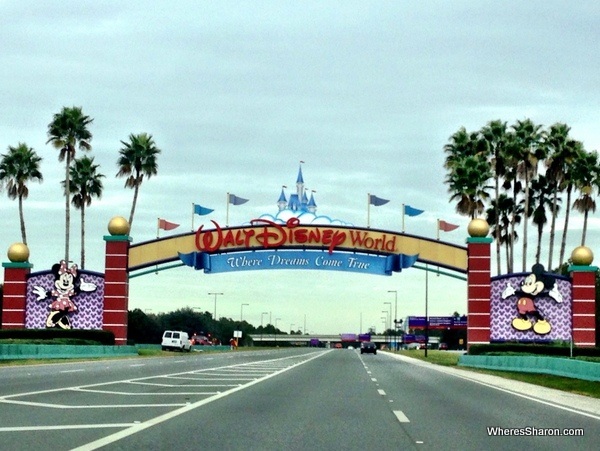 Entrance as we were driving in

The crowds. It was crazy. People everywhere. 50+ minute waits for all attractions.  You couldn’t even sit down in a chair to eat something.  It was quite honestly a nightmare.

I didn’t even go on a day that is considered busy.  I chose a Monday on purpose as they are supposed to be one of the lightest days.  If that is a lighter day, I’d hate to see a super busy one.  I was shocked.  I visited Disneyland LA on new years eve and it was nothing compared to this.

People were not considerate either which made it harder.  We actually got a great spot at one of the parades and quite enjoyed it.  Until they called everyone up to dance with them. S was one of the first up as happy as can be, and then she was shoved out of the way by all the adults wanting to stand around the dancers to take pictures.  They weren’t standing there to dance and it made me quite mad.

Eating lunch was not much fun either.  We couldn’t find any chairs to sit on.  People were just everywhere. 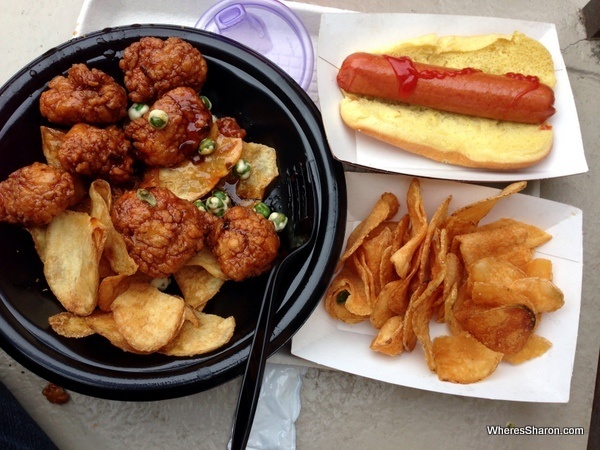 Honestly, I found this to be a joke and it was no doubt partly responsible for the long wait times since we were waiting in line while others were able to walk past us to the front.

FastPass is a system whereby you can get a ticket with a time frame for that particular attraction where you can return later and skip the majority of the line, so instead of waiting 50 minutes, you may only wait five.  It sounds great in theory but I only managed to use it once.

The problem?  Finding the damn FastPass booths.  They rarely seemed to be located at the ride, and I never seemed able to find them.  Or I would find them and they were already only offering a time seven hours in the future.  You also can’t pick your time, so you could get a time and be on the other side of the park and have trouble getting back, especially if you are in one of the one hour lines for another attraction.  It does not work well for families with toddlers who are not familiar with the park.

It is hard to beat the magic of Disney.  Just like the Disneylands I have visited, Magic Kingdom is just magical.  It’s so perfectly presented, maintained and looked after.  The staff seem so happy and when I wasn’t grumbling and annoyed by the people, I would catch myself just smiling.  It is a special place.

When we were actually on the attractions or watching the parade, it was fantastic.  I was also very impressed by the waiting area at the Dumbo ride.  You are actually given a pager while the kids play in an indoor play area waiting for your turn.  However, even this was only limited in how good it was.  Only about ten minutes of our waiting time for this ride was spent here, the rest in lines. 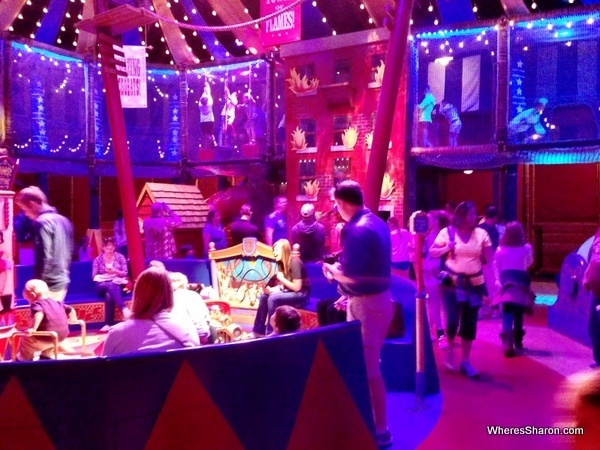 Get a FastPass map if this is possible.  Something that shows you the location of all the FastPass booths in the park and try to get around them early.  This will obviously still have issues if you are going to Disney World with a toddler, as it is hard to dash around the park and then if you end up with times close together at attractions far apart you will have issues.  It would be worth a try though.

The stroller was useful.  You weren’t allowed to take it on attractions or even in lines for attractions though, so your kids need to be able to stand for long periods of time or you need to be happy holding them.  I would definitely take a carrier for a younger kid.  There are lots of stroller parking areas which were supervised.  Make sure you put something on your pram so you know it’s yours! You can also hire prams there, but it was cheaper for us to buy a cheap one beforehand. 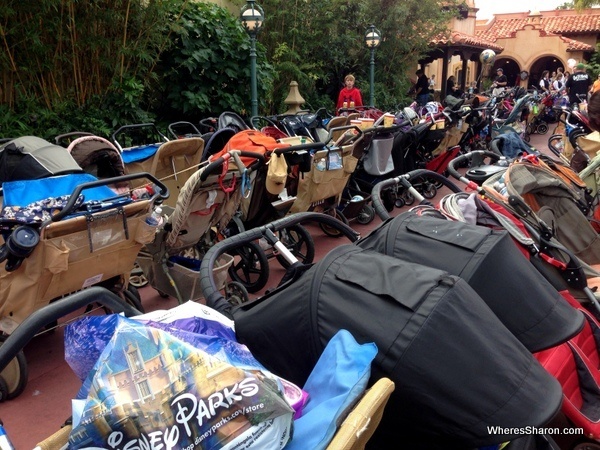 Try hard to go at the least busiest time possible.  If going was important to me, I would just suck up the big expense and stay in one of the Disney World resorts and plan to go only for a half day at a time.  I think it would be less frustrating that way (but a lot more expensive).

S loved the rides – once she was actually on them.  She would basically have to be dragged into lines and onto the attractions.  She also loved the parade until people pushed her out of the way, so she couldn’t dance. 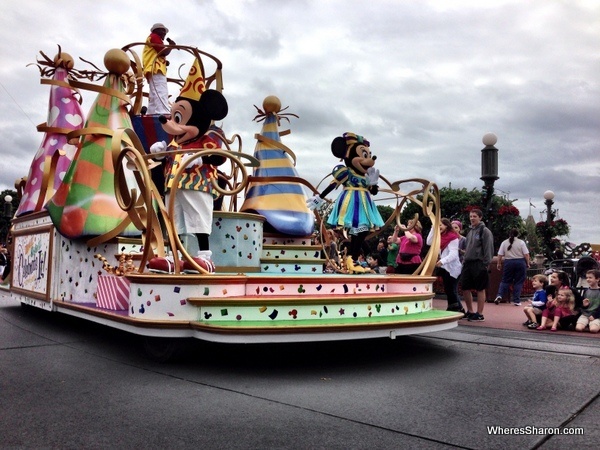 The parade was exciting

She was so excited on arrival and when she first arrived at Sleeping Beauty’s castle.  I will not forget how excited and happy she looked for a long while.  She loved meeting the Chipmunks and giving them a big hug.  She would have loved to meet other characters too, but the lines were just too long.

She wanted to go home very early on. She hated the crowds and basically spent the entire time we were there whinging.  She has had more fun at playgrounds, and I think she enjoyed Old Town USA better.

Would I go again?

At the moment, I never want to go again ever.  This will no doubt pass, and we will probably try to go again when the kids are a fair bit older.  I would want them old enough to understand and accept all the waiting.  I would only go on a day considered the least busiest day of the year as well!!

For me, it was not the happiest place on earth this visit, more like parent hell.  It was basically moving from one line to another while S whinged and drove me crazy.  I don’t think I was the only one. Whenever I saw a parent with young kids, at least one of their kids would be screaming while they pushed them around in a pram looking annoyed.  Fun times. Not.

I feel ripped off that I paid so much money to stand in lines.  we only lasted five hours, and we would have come back even earlier if J had been able to pick us up earlier.  We spent the last hour sitting waiting.  It was not worth it for us at all.

I do think there is something special about Disney parks though, and if you are only ever going to get the one chance to go and it happens to be with a toddler, then I would go.  I would suck up the painful parts for that experience.  I had been before though, and I am sure we will get the chance again in future, so I wish I had just waited. 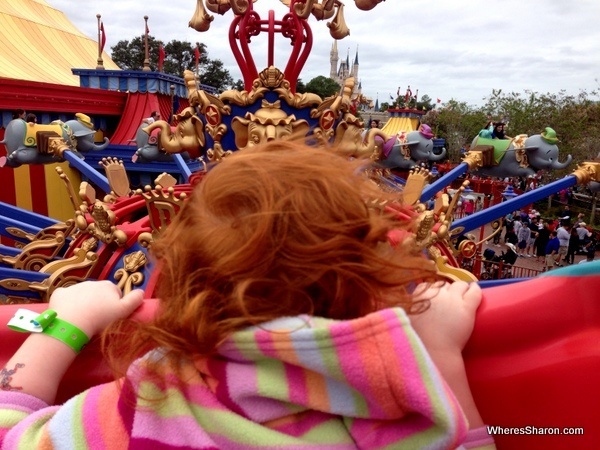 Enjoying the view from the Dumbo ride

Practical Information
The tickets were expensive.  It cost US$196 for the two of us.  S was on a kids ticket but this is only $10 cheaper than an adult.  J dropped us off at the guest drop off point for Magic Kingdom, but this was still a monorail ride away from Magic Kingdom.  Disney World is incredibly huge!!

You can read more about our time in Orlando or about our Road Trip USA Deep South Tour.

Added later: Well we did go again and it was awesome! This time in Paris. Read about our experience here.

I would love to hear your experiences of visiting Disney World with kids!  Surely others have had better times than this?