I have been quite shocked over the last couple of months how people have reacted when we have told them that we are only planning on taking a 45 litre backpack and 20 litre back pack. People either seem to think we`re crazy, joking or that it plain can’t be done (and they’re not shy to say this either). 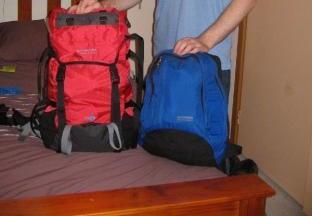 Wouldn’t you rather these bags than big suitcases?

Maybe this isn’t surprising as it is coming from people who are used to only going away for their 4 weeks leave a year, and it is not such a drama to lug around big packs for that amount of time. In the past I have always taken my big back pack with me but after reading numerous accounts from people on the internet about how they ended up getting rid of most their stuff after a few months, I decided I wanted to try to take as little as possible as the idea of only a day pack really does hold a lot of appeal.

1. I have read many people complaining about how carrying heavy back packs was ruining their backs and they were having a lot of pain after a few months.

2. If you have smaller bags you can take with you on trains, buses etc you don’t have to worry about them being left behind at a bus stop/train station. I have been on buses where the driver would take all the bags off at every stop and if you weren’t standing there to put it back on you were in trouble – huge hassle.

3. A smaller bag will stop you collecting lots of crap along the way that you don’t need. It also means you don’t end up taking stuff you don’t really need because there`s space.

4. You don’t spend all yr time packing and repacking a bag and trying to find something.

5. When you arrive somewhere you can walk around freely while you find accommodation and you won’t be such a target for touts. In fact, you could even sit down and have a meal or something and not feel as though you have to rush to get rid of the bags.

6. After finding a packing list someone posted online that sounded totally reasonable, I tried packing what it said and it fit in small bag.

Reasons why we should take a bigger bag?? You know I really cant think of any which is part of the reason I have been shocked by people telling us not to do the small bag option… If everything we need to take can fit, why not go for it? Anyway enough about that, we are not taking a big bag – so there!!

Looking for a backpack? I recommend this one for travelling with only carry on.

Disclaimer: This article contains an affiliate link. If you purchase an item through this link, we will receive a small commission at no extra cost to you.