Fun Things to Do with Kids in Mobile AL

The next stop on our Road Trip USA Deep South Tour after Tallahassee was Mobile, Alabama.  We had just under 24 hours in this city to explore.  It was only a short time, but since we wanted to be in New Orleans for J’s birthday, we didn’t have a choice.

Thankfully, 24 hours was long enough to give us a taste of this city as well as check out some of the things to do with kids in Mobile AL. We did not find it the easiest city to find personal experiences about so hopefully this article will help you.

I do want to add that we arrived in Mobile on Black Friday – things were quite dead which was not something we expected, but I have since been told is quite normal. Not being American, we had no idea what affect the long weekend might have on things.

Here are the details of what to do in Mobile Alabama with kids, as well as other information about our time there to help you have a great visit.

Fun things to do in Mobile AL for kids

After checking in (see below for accommodation details), we headed straight for downtown Mobile. One of the main things to do in Mobile AL with kids has to be visiting the downtown area. 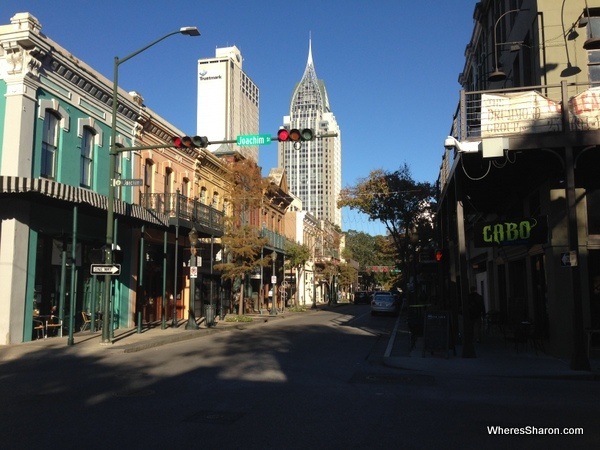 We had a shock when we arrived, it didn’t feel like the downtown area of a city at all.  There were empty blocks and houses in the middle of things.  It was also basically empty of people apart from people sitting around in a way that did not make us feel comfortable.  Because of this, we didn’t do the big walk we had planned, but parked on Dauphin Street and just walked up and down here.  It felt sketchy.

Dauphin Street is the main street and is compared to Bourbon Street in New Orleans in our guide book.  Now that I have been to both, I find that comparison strange.  There is not much on Dauphin Street, just some shops, restaurants, bars and it lacks the people to have any real energy.  We walked down to the river front but did not hang around long.

We talked to a local during our walk who explained that everything was shut that day because of Thanksgiving (it was Black Friday), and that the next day there would be a lot of people around thanks to the shops re-opening and having sales. So it sounds as though we were just unlucky with our timing.

We went back the next day.  There were more people around but not many more and my impression did not change much from the previous day.  We are finding on this road trip that we are having to rethink how we imagine cities. Back in Australia, they always seem to have a clear CBD and lots of shops and activity.  This is not how we are finding places here at all.  The shops all seem to be out in the suburbs.

We had been going to eat dinner there, but there wasn’t anywhere that appealed, so we headed back to our hotel and ate in one of the many places around there. 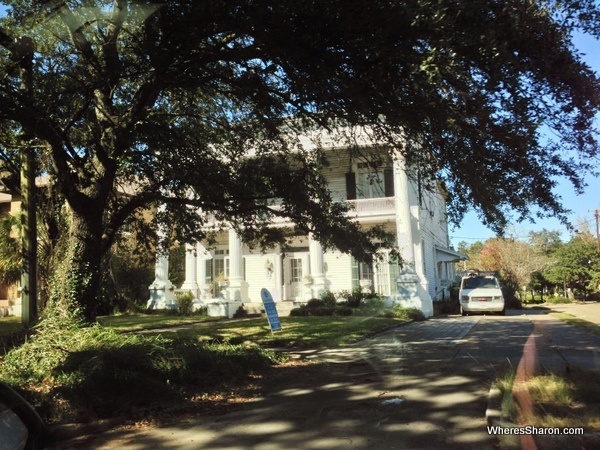 The following day we also drove down Government Street as we had read there were lots of grand old houses.  There is and it’s enjoyable to drive around and have a look.

The next morning, we headed back into the downtown area and to Fort Conde. 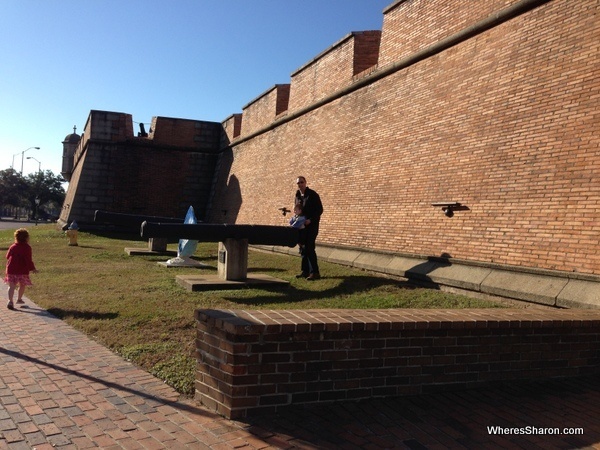 Fort Conde is a reconstruction of the original.  It was originally built by the French in 1723 to guard Mobile and its citizens.  It doesn’t look like much from outside, especially as it borders the interstate, but the museum is interesting and it’s free.

It works out well as one of the things to do in Mobile Alabama for kids as there is plenty of space to run around. We enjoyed learning a bit of history of the area and I’m sure older kids would enjoy this aspect as well (our kids were just 1 and 3).

This was our favorite things for kids to do in Mobile AL, and is a great science museum for kids of all ages (and adults, J is still talking about it a lot!).

Initially, I was very disappointed.  The entry price was higher than what was stated on their website and the first room we went into about how bodies work was not good.  Many things didn’t work, and it seemed aimed at secondary students or adults more than kids.  Thankfully, the other rooms were brilliant. 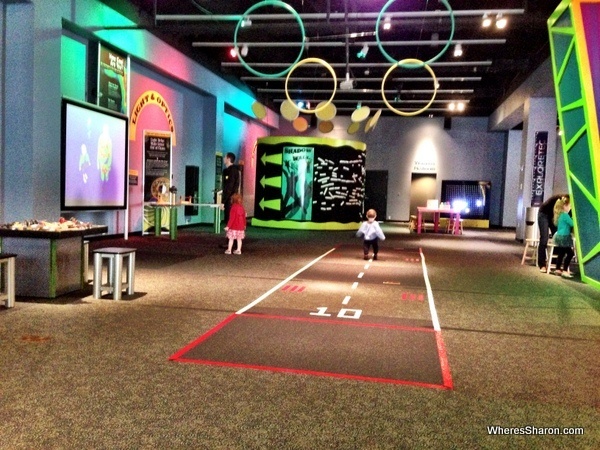 Part of the “Tinker Works” room

We all loved the “hands on hall” and “Tinker Works”.  There were so many hands on activities for us to do.  Both J and I got into it as well.  There was no need to learn the science behind things to have fun and experiment.  I especially liked the Tinker Works area as there were a lot of different things to build with kids using items such as pipes, cups and string with instructions.  There are also ways to try out your designs to see if they are any good.

For example, S and I built a parachute and there was a wind tunnel to try it out in.  We could have spent all day in this room.  Just brilliant! I think this museum is where you will find the best kids activities in Mobile AL. 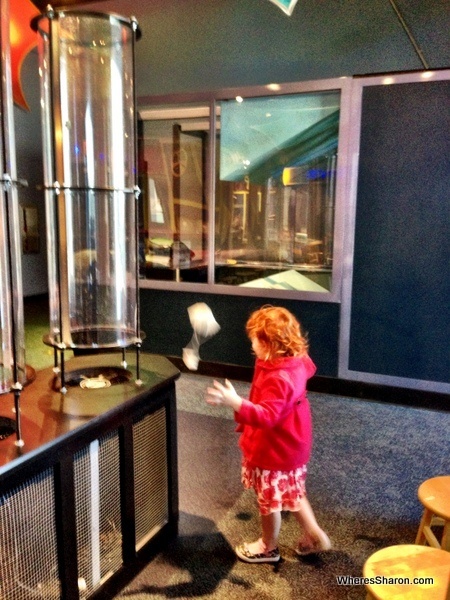 Trying out our parachute in Gulf Coast Exploreum Science Center

There is also a chemistry lab with an assistant who did a chemical experiment with S and a great play area with a big boat with ball pit ocean complete with plastic fish and a light house!  It was very cool and both kids could have played in this room alone for hours.

If you can’t tell already, this place was a big hit with all of us and S keeps asking to go to museums now!  There are so many things to do in this center.  Z loved it all as well.  He would join in on the family tug of war, dance behind S in the virutal reality game and he LOVED the boat play area.  However with the cost of entry, if we didn’t have S as well, I probably wouldn’t go here with a one year old.  I think he would have been bored faster if he didn’t have S to copy, and the play area was great, but we could go to a play center for that.

If you only have time for one  of the Mobile attractions for kids, then this is what we would recommend.

We stayed at Mictotel Inn and Suites across the bay at Daphne. It is a nice looking hotel and more upmarket than our previous stays.

The room was nicer and not as basic as our previous motels, but everything was still minimal.  Unfortunately, the walls were paper thin – we could hear our neighbours talking and watching tv.  We weren’t happy when the alarm was set to go off early in the morning either! 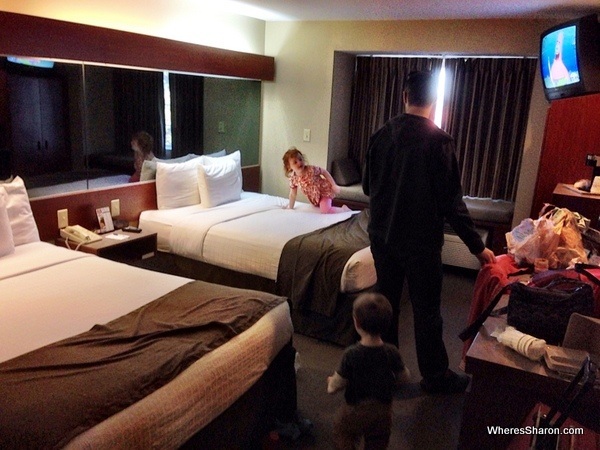 Check out the latest price here.

We spent our budget of $136 perfectly including the $34 museum entrance.

The Mobile AL things to do with kids were a hit! The kids loved the science center and they were happy to run around the fort.  They were a bit upset at another one night stop though (its the third in a row), so we will try to cut down one night stops in future.

Mobile was smaller than we expected and more run down. It was also very quiet which stopped it having a good vibe. It definitely has a lot of potential, but there just were not enough people around to give it the type of atmosphere that I enjoy and it felt too vacant – I wish we had come at a different time of year. I am glad we stopped here to try something different, but I can’t see myself returning. On the upside, we did enjoy the more kid focused things to do in Mobile for kids.

We did enjoy some of the other attractions we visited in Alabama later in our road trip though!

Onto our next stop of New Orleans!  You can read more about this section of our road trip in driving Miami to New Orleans.

What are your favourite attractions in Mobile?  Did I just go at a bad time?