11 December, 2013
This post may contain compensated links. Find more info in my disclaimer.

This post about the Louisiana Children’s Museum and jazz at Preservation Hall is part of our post about things to do in New Orleans in a few days on our Road Trip USA Deep South Tour.

What is a children’s museum?

One of our stops in New Orleans was at a children’s museum.  It was our first children’s museum.  Children’s museums are not something I have come across outside of the USA which is a shame – they are awesome!  They are found in many cities in the USA.  I do think the name is a bit misleading though.  I guess you could say they are a cross between an indoor play center and a museum, but I would describe them more as a massive play center with an educational aspect and many areas for play acting.  I don’t really like comparing them to play centers though either, as they aren’t really like this.  Hmmm tough.  Perhaps the following review of the Louisana Children’s Museum will help explain it better!

S and I set off for the Louisiana Children’s Museum by streetcar. There was a streetcar stop at the bottom of a nearby street, Ursulines, and we walked the three blocks to the edge of the Mississippi. There we waited a short time for the Riverfront line car to take us downtown.

S was very excited to be taking the tram, and rushed off to grab a seat while I struggled to pay $1.25 each for the fare into the fare box. The tram was quite crowded as it was the weekend with a lot of tourists about. S was almost silent the entire six stops to Julia Street, where we got off.

The Julia Street stop was at the entrance to the cruise ship terminal and a little way out from Downtown. We walked the six or so blocks north into downtown to the museum, with S riding on my shoulders.

Entry into the museum was $8 each and we were in amongst the exhibits straight away. The bottom section was largely dedicated to an exhibit on the port of New Orleans, with information on the trade that takes place through the port, and a little of its history. S enjoyed being a riverboat captain but otherwise raced through the exhibit. Also on the bottom level was a section which contained a small mock house that S loved.  She insisted we sit down for a pretend meal, which she cooked and then washed up.

Overall the bottom section was probably a bit old for her, so we quickly moved upstairs. She enjoyed this level much more.

We first played on a pretend barge, in a section on the ships that used the Mississippi river. Next we found S’s favourite bit of the museum, a small house set up as a house that might have been in the back country some time in the 19th century complete with beds, tables, chairs, desks, and crockery. She said this was “her” house and I had to sleep somewhere else while she “slept” for the night in the house. We’d come back to the house again and again as she played in it with other kids.

There were some other sections as well: a pretend supermarket filled with plastic replicas of a lot of foods you’d find in a real one, including trolleys to put things in and a cash register section to pay for them. It was very well set up. S wasn’t very interested, however. There was a pretend cafe, with a miniature kitchen with plastic food and equipment, fake ovens and fridges as well as tables, chairs, cups, plates and even sauce bottles and menus. S took my order before coming back with some seafood, before another girl joined us and took our orders. It was very detailed. 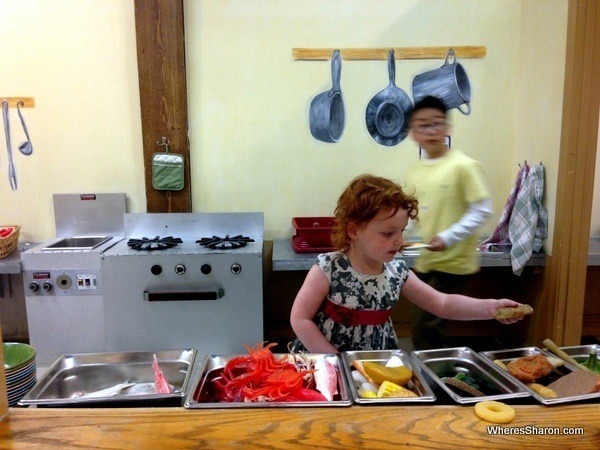 Working in the cafe

At the back was a section on New Orleans and its history, which looked more interesting for me but S was not interested at all, and returned to the little house where we spent at least another half hour.

There was a corner dedicated for kids 3 and under to play, too, with a lot of fun looking play equipment.  It was a bit small for S, although it would have been perfect for Z.

All up, we spent close to two hours there before the museum closed at 4:30. S loved it and was sad to leave. She would have played all day if we could have stayed. For her age and for older kids, it is a great place to spend a few hours. Although not big there were several different displays, more play focused than museum exhibit. Overall I thought the museum was decent value for money, although more like a play centre than an educational experience and didn’t have as many things as other children’s museums like the one at Chattanooga (which I liked much more).

We took the streetcar back to Ursuline. On the way back the streetcar driver told us about the Alligator festival, the one week its legal to hunt alligators as a means to keep the population under control. Apparently, alligator meat is really good. Light, fluffy, moist and really tasty, or so he said. When we got home Z was awake and it was time to go to dinner.

Everyone was hungry so we went to Clover’s Diner, a close by diner that served good hamburgers. It wasn’t anything particularly special but it filled the spot.

After dinner and getting the kids to bed, it was time for my birthday present to myself: a trip to Preservation Hall for a traditional Jazz concert. Established in 1961 to help preserve and showcase traditional New Orleans Jazz, Preservation Hall hosts a local jazz group group each night for three 45 minute concerts at 8pm, 9pm and 10pm (in addition to a recording label and touring band).

My original plan was to confirm I had the right address before heading off for a beer but when I found it there was already a line of 20 odd people. Even though it was only 7:30, I thought it best to line up. Lucky I did as the line ended up twice as long. I later overheard from the staff Monday nights are particularly easy to get into, with Friday and Saturday the hardest.

About 15 minutes before the show, people with reserved seats were pulled out and taken inside and just before 8pm the rest of us filled in. The entry price was $15. 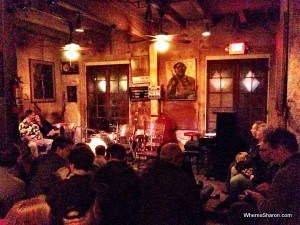 Preservation Hall before the performance

Preservation Hall itself was quite small. Big enough for the band and maybe 80 people max, with seating for only 30 or 40. I just missed out on a seat and had to stand, although I was still only 10m from the band. Kids were allowed to sit on cushions at the front (literally just in front of the band!) and the reserved seats were incredibly close. The lighting was moody and dark, and it was I’d imagined an old time jazz bar would be like, with nicotine stained, smokey, walls.

When Preservation Hall originally began it provided a venue for many of the original Jazz players, but with all of those dead, tonight’s band was the New Orleans Legacy Band, a six piece band – some of whom were inspired by their own visits to Preservation Hall many years ago. They played a range of jazz and some ragtime songs, many of which were local to New Orleans, being passed down from one generation of jazz player to the next. Like any good jazz concert it featured plenty of solos.

It was great music, especially in such an intimate setting. The $15 ticket gives access to any or all of the three concerts (you could stick around if you wished after a concert then reenter the room shortly before the next). Because I was standing, I only watched two and then I left.  But even then I got an hour and a half of the best jazz has to offer for just $15. 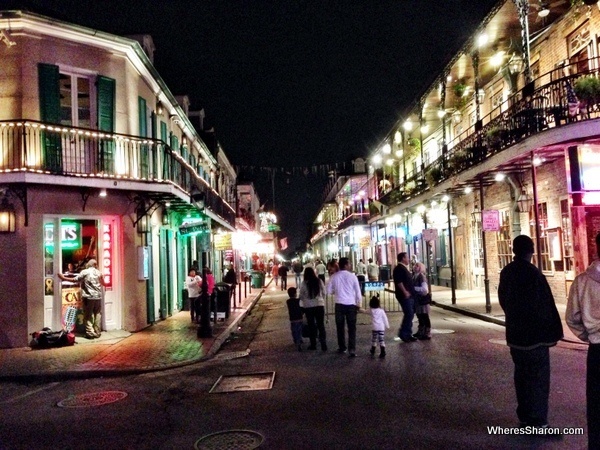 After the concert I decided to check out Bourbon Street by night.

From St. Peters Street back to Canal Street, it was lit up, and the street blocked off. Compared to where I’d just been, it was like a different city, certainly a different time. Bars and bands blasted everything from AC/DC to the Gorillaz. The bars had few people, and every bar had two or three people out the front, both as security but also to try and get people into the bars. There were people with beers and large daiquiris on the street hopping between bars. By the time the “gentlemans club”s started Bourbon had taken a seedier turn and I turned around and headed back to the hotel.

You can read more about things to do in New Orleans.