10 Great Things to do in Bandar Seri Begawan, Brunei

When I booked my last minute trip to Brunei, I was not sure what there was to do in this small sultanate in Borneo, but I was excited to find out! 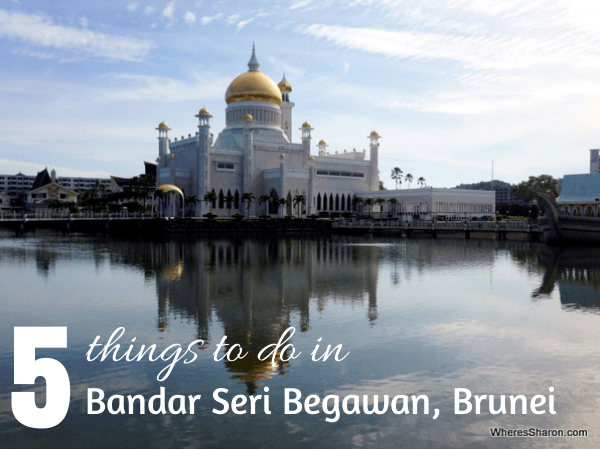 I spent two nights and a full day in the capital, Badar Seri Begawan (or BSB for short).  The downtown area is quite compact and it is a pleasant place to walk around.  It was easy to discover all the following places, as well as the rest of downtown on foot.

There are generally nice wide footpaths, everything is clean and nice and the locals are very welcoming.  Here are my top things to do in Bandar Seri Begawan!

Top 10 Things to do in Bandar Seri Begawan 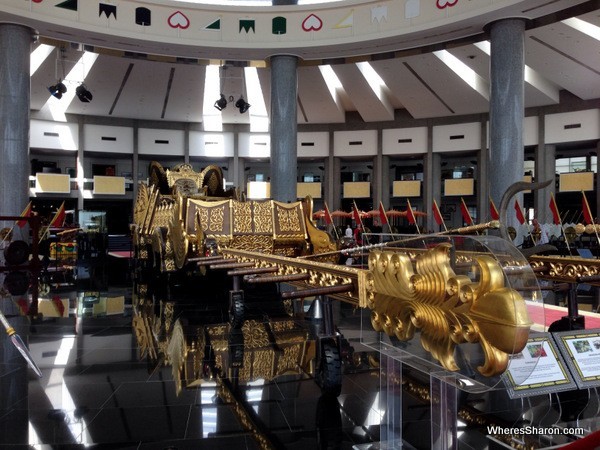 Inside the Royal Regalia Museum

This free museum is located on the edge of the downtown area.  Outside, it is quite an impressive building which matches some of the large impressive exhibits inside.

Mostly, this museum houses gifts that the Sultan has received from various heads of state around the world.  It is also home to important items that were used in coronation ceremonies and other important events.

If you do not have a keen interest in Bruneian history and royalty, then this museum can be a little boring.  It is worth a quick look around though, if nothing else but to enjoy some air conditioning and some of the more impressive exhibits.

Warning: Ensure you take off your shoes before entering and go straight to the information desk where you will be given a locker for all of your items.  For some weird reason, unless you are in a tour group, you are not allowed to take photos inside this museum.  I happened to walk in at the same time as a tour group and behaved like they did and ended up in trouble!!

This beautiful mosque is located in downtown Bandar Seri Begawan and is an essential thing to do in BSB.

It is pretty outside and, at 44m tall, is the highest structure in downtown Bandar Seri Begawan.  The inside is quite grand, but not as lavish as I had thought it would be.

Non muslims are allowed to enter at non prayer times, although we could only go just inside the building, so unfortunately we could not see the underside of the dome.  There are outfits to wear at the entry way to cover up and entry is free. 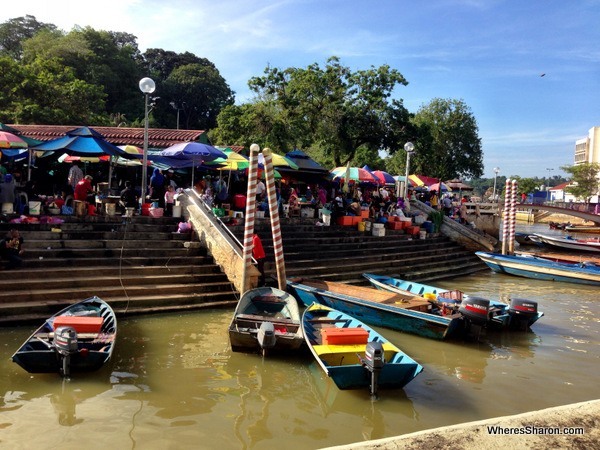 One of the worthwhile activities in  Bandar Seri Begawan is to vist this local market by the river. It is a great place for a wander or to pick up some fruit and vegies or lunch.  We had a great meal here for B$1.  This place is well worth a visit in Bandar Seri Begawan. 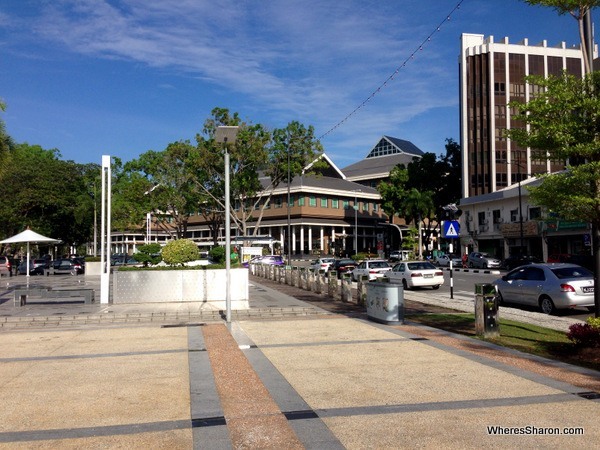 Another thing to do in Bandar Seri Begawan is to take a stroll along the waterfront area.  There is a nice promenade by the river with good views over to Kampung Ayer. 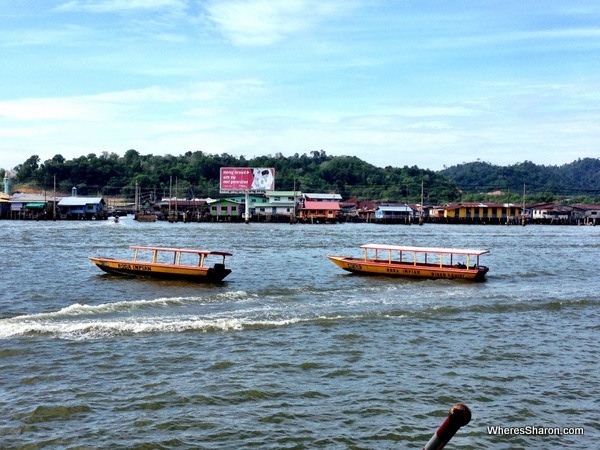 Kampong Ayer from the waterfront 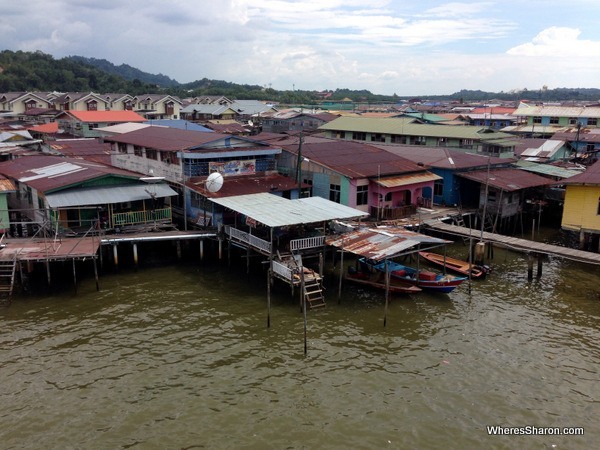 What surprised me most was how great much of it looked.  Some of it looked just like house and land package areas back in Australia, albeit all the houses were on sticks.

We caught a water taxi over to the Kampong Ayer opposite Bandar Seri Begawan.  This cost B$1 each and was quick and easy.  There is a tourist information centre where we received free “I <3 Brunei” badges and learned a bit more about Brunei.  There is also a viewing tower here.  Like everywhere else we visited, it was free.

It was very pleasant walking around the water village.  There were many boats, houses, cafes, schools – everything a community could need.  It is definitely not like the improverished stilt villages I have seen in other countries, although there definitely were some horrible looking sections.  The photo below is actually taken of the stilt village adjacent to Omar Ali Saifuddien Mosque.

We had a good time walking around the stilt village, having drinks there and checking out the visitor centre.  It is definitely a must see on your things to do in Brunei list. 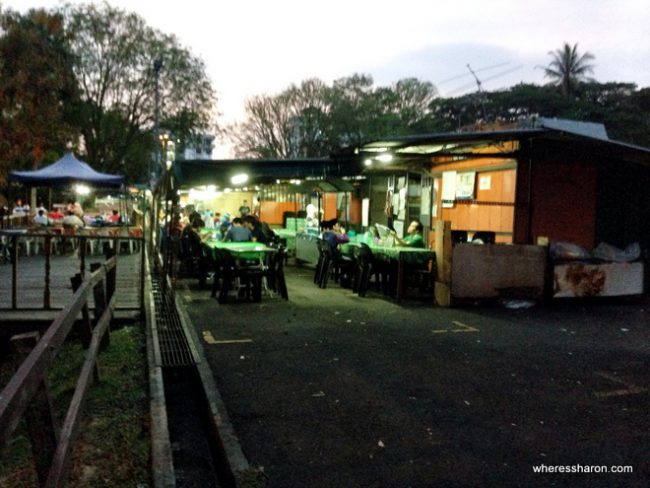 This night market is just on the edge of central Bandar Seri Begawan, across the road from the Terrace Hotel and near the Radisson. It’s undercover with plenty of seating.

There are lots of cheap, good eating options and it’s a great chance to mingle with locals.

There are walking and running trials, playgrounds, exercise equipment and a waterfall. It’s a great spot for a picnic and a good choice if you are looking for things to do in Bandar Sei Begawan with kids. 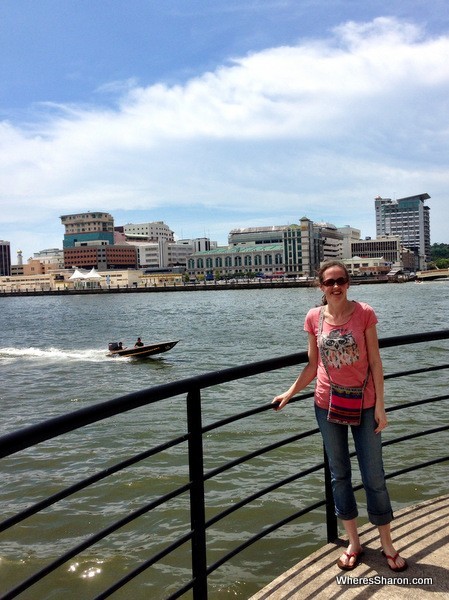 There are also some other things to do in Bandar Seri Begawan, but they all require buses or private taxis – please be aware that buses stop running at 6pm and taxis are not easy to find.

I considered visiting Brunei’s infamous Jerudong Park Playground.  This was once a grand theme park that the Sultan built for his people in 1994.  It was the only major modern theme park in South East Asia at the time and entry was actually free.

The concert hall even hosted free shows by the likes of Michael Jackson!  Unfortunately, many of the attractions were sold off to pay for debts and the theme park was not that popular with the locals.  Today, it is meant to be quite depressing with barely any rides left which you now have to pay for.

Given there is not much there and the taxi ride was going to be B$35 each way, I decided to skip this attraction.  I would go there if I ever return with the kids though.

This mosque is a 20 minute taxi ride from the centre and looks beautiful. 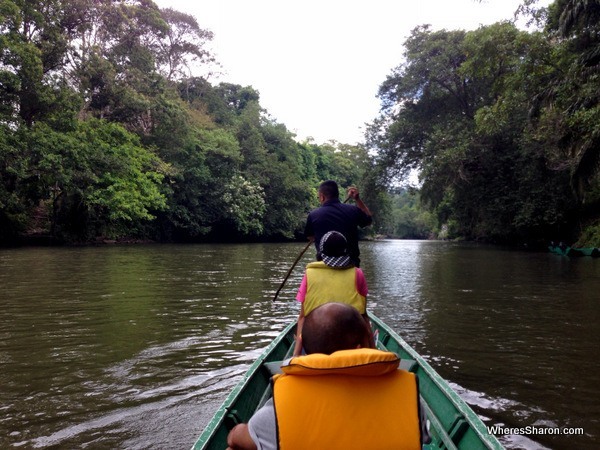 No trip to Brunei is complete without a visit to the rainforest. Read about it here.  You can also check out my guide to how to have the perfect stopover in Brunei.

I stayed at the Terrace Hotel. I recommend it if you are looking for the cheapest hotel (which is still nice and clean and hotel like) in a very central location.

These are some other great options:

Map of Bandar Seri Begawan things to do

Read all our Brunei guides here. You may also enjoy reading our guide to Kuching.

Anything else I should add to this list of things to do in Bandar Seri Begawan?

Disclaimer: This post contains affiliate links which means that if you make a booking after clicking on them then we will receive a small commission. Thanks!