5 reasons to go to Brunei for a long weekend

3 April, 2014
This post may contain compensated links. Find more info in my disclaimer.

This week I booked a trip to Brunei for a long weekend.  After I booked it, I posed the question in Facebook, is this a totally crazy or totally awesome thing to do? 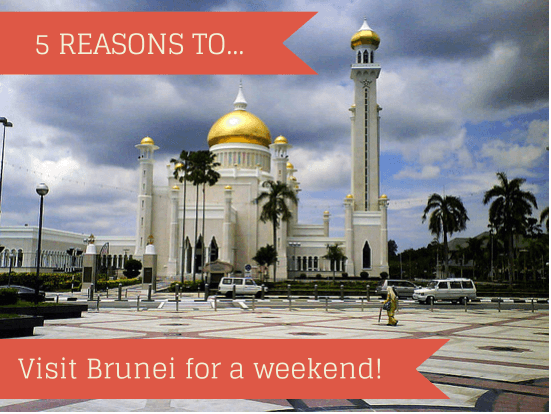 The vast majority of people said awesome, but I wonder if that’s what the majority of people really think. I live in Melbourne, Australia, so it is not like Brunei is just a short flight away.  Why do it?  Here are some of my reasons below!

1. I haven’t been to Brunei before

For some people that may not matter, but I LOVE going to places I haven’t been before.  I want to go everywhere.  This means that going to Brunei is something that interests me a lot!

2. I don’t know much about Brunei

The less I know about a place, the more it fascinates me.  Brunei is not exactly a place that comes up in everyday conversation.  I’m sure there may even be people reading this who don’t know where it is (map below!).

3. I only have four days available

I am a big advocate of taking advantage of any opportunity to travel.  This is the biggest reason why I have been able to go to over 80 countries.

I only have four days that I can go away, and I would rather go for a short time than not at all.  Brunei fits into this time requirement as it is only 7 hours from Melbourne.  If you are not Australian that may seem like a long flight, but from here it’s a relatively short one! I have young kids and a hectic job.  I am used to no sleep and rushing around.  I will probably get more rest away from home, so the travel part over a short time frame does not bother me.

4. It sounds interesting and different

Brunei may be a tiny country tucked away in Malaysian Borneo, but it is also one of the world’s richest countries thanks to oil.  It is also a strict religious state ruled by the Sultan of Brunei. Alcohol is banned. 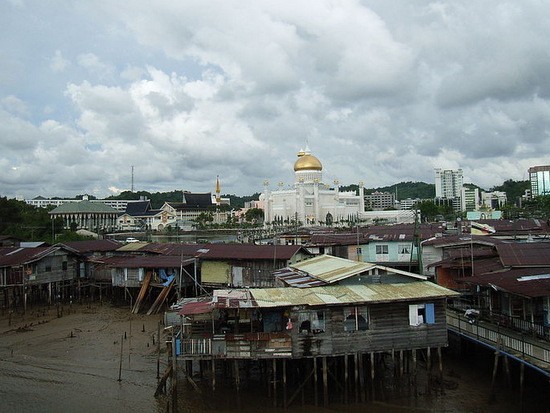 Magnificent mosques, extensive over-the-water stilt villages, a once magnificent theme park built for the people and a fancy hotel all await me. In addition, Brunei is home to pristine rainforests.  It may not have all the attractions of nearby (and much bigger) Malaysia, but it has plenty of interest for at least a couple of days.

5. I have friends who will just be over the border in Miri.

This was the biggest factor when it came to my destination choice.  I have a good mate from England that I met in Guatemala who is flying into Miri in Malaysian Borneo the same day.  We haven’t seen each other since 2008, and I can’t wait to catch up.  We plan to catch up in Brunei, as well as over the border in Malaysia.  One of the best parts about travel is definitely the people I have met along the way, and it is even better when I get to see them again in yet another random part of the world!  After this, we will have met up in 4 different continents!

You can also read my posts from Brunei now that I have been and my guide to how to have the perfect Brunei stopover.

So what do you think?  Is going to Brunei for a weekend a totally awesome or a totally crazy idea?

Quick Guide to Things to do in Antigua in a Day

All fabulous reasons to go visit – the best is getting to see an old buddy. Just a shame there will be no drinking involved. Have a blast without the kids and enjoy it all!

I think it’s an awesome idea! Go see the world if you can! I would too if I could afford it LOL. Found you at Bronwyn’s Neighbourhood Noticeboard, I hope you will enjoy your trip! 🙂

Thank you. Yes, the other factor that is not listed here is that my husband just got a new job for more money so that helps as well!

Sharon, Can’t wait to read about your Brunei adventures. I’ll be curious about your border crossings as well! Have fun!

Thanks! I am not sure now if I will have a border crossing or if I will just stay within Brunei! So much to work out in such a short timeframe. Stay tuned 🙂

So awesome, and SO EXCITING!
You have to seize these opportunities, whenever they pop up!

I too just booked a spontaneous trip, for my next work break, for a week in Tonga – for very similar reasons – I have always wanted to, have never been before, and I have the time!

Look forward to reading about the trip!

Can it not be simultaneously awesome and crazy?

It’s probably on the far side for a long weekend for me, but it’s not a big country and four days seems like a nice amount of time to devote to it.

Good to see ppl give the forgotten tropical sultanate a shoutout! We had great time there, the 7* Empire gives great rates because most people want alcohol on their vacation so they need to seduce with price. And Brunei has a special type of durian found nowhere else, it is small with red flesh. A must for durian hunters.

I can’t stand durian, but I am looking forward to Brunei. Only 4 more sleeps! Any other tips?

Sounds like a great adventure. I find it very interesting that Brunei is located on an island that belongs to both Malasya and Indonesia. Looking forward to reading about your adventures there!

You should most definitely visit Malaysia. I am from the state of Sarawak and the city of Kuching and I maybe biased but it is so different from the rest of Malaysia. There is so much to do and see from rainforest walks, beautiful beaches to orang utan habitats. I wrote about Kuching, Sarawak in my blog. Check it out if you have time, there are some fun pictures about must try foods.

For sure!! I have actually been to Kuching, Kota Kinabalu and Sandakan in the past!! I especially liked Kuching 🙂

Wow how exciting! Hope you have a great time 🙂