7 November, 2011
This post may contain compensated links. Find more info in my disclaimer.

We started today with a trip to the beach after having breakfast quite early. It was a great time to be at the beach as not so many people around.  S had her first dip in the water and even seemed to enjoy the waves.  Even from in the water, she attracted the attention from friendly locals.  The local Thai people all give her a lot of attention.  My belly gets a fair amount as well. I even got my first belly rub this morning this pregnancy. 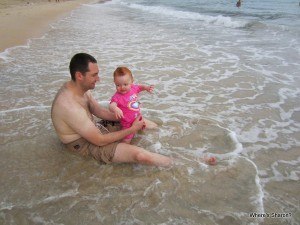 S is loving the water at Kata beach

Unfortunately, it started raining though (big, heavy tropical rain) and we had to leave.  This has been happening on and off throughout our trip so far and looks set to continue according to the weather forecasts.  We feel a bit ripped off, not because the rain really causes us any issues, but because all the hotels recently went into high season prices (which are a lot more expensive than preceding low season) because the monsoon is meant to be over. We should at least get the nice weather to go with the price tag!!  It is nice and warm though without being too stinky hot.  Quite humid as well but not horribly so.

After S had a nap, we set off for Phuket town, the main town on the island.  We figured this would give us a taste of how the locals live instead of the well off tourists.  It also looked quite pretty when I saw it on TV, with its Sino-Portuguese architecture.  I guess this is the type of thing I feel I have to do to ease my guilt about staying in a resort area and to feel like I am actually seeing the “real” Phuket.

To be honest, it came up lacking.  There were no actual sites that interested us as there didn’t seem to be much of interest there.  That part we weren’t surprised about.  We had a good walk around which is pretty much all we intended to do and a great lunch for a lot cheaper than in Kata (we have so far found everything other than this meal to be much more expensive than we expected).  There were some pretty buildings, but it wasn’t as nice as what I had seen on TV leading up to the trip.  It was kind of ruined by a lot of traffic and the difficulty walking around too. 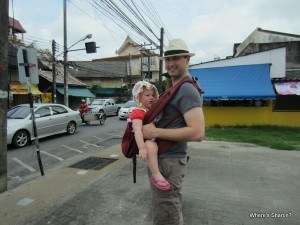 How we walk around, Phuket Town 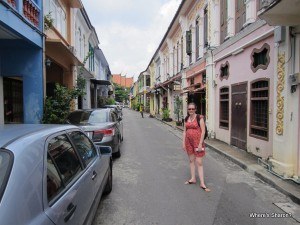 Me pregnant in Phuket Town

It is annoying to get around Phuket.  The public transport only seems to run between the beach towns and Phuket town, not in between them.  It consists of sorng-taa-ou, which are like utes with the backs covered up and a bench seat along each side.  The 20 minute journey between Kata and Phuket Town is meant to take about 2 hours on one!!  So we were stuck hiring a “taxi” which aren’t really like taxis at all buy just guys with cars who will take you places for money.  It isn’t that cheap (although very good value compared to catching a taxi in Australia), and it puts up a barrier with exploring the place.  We thankfully were able to get one to Phuket town there and back easily though, although we got a bit annoyed by the taxi desk at our hotel who tried to overcharge us despite the fact that the price was written on a board behind them!

When we got back, both S and I had a great nap while Josh went for a massage.  It’s so annoying being pregnant and not being able to have cheap massages!  or beer for that matter, Thailand’s not quite the same without it!  Otherwise, I picked a great time to be here as I don’t really even think about my pregnancy.  First trimester nastiness is over and I’m not feeling massively huge and uncomfortable yet.  Also, since we do have to spend a lot of time taking it easy while S sleeps, it means I am forced to take things easy too which is good.

S having two naps was awesome as it meant she was up later, and we weren’t confined to our hotel room at too ridiculous an hour.  My favourite part of the day in countries such as Thailand is the evening when everything seems to come alive and it was great to get out and enjoy it a bit more than we had been able to the previous night.  So after another “swim” at the hotel, we had another great Thai meal, complete with street side pancakes for dessert and wondered around for the while. It was a lovely temperature.  There aren’t really that many tourists around at this time of year, it seems, but there were enough to give the place some atmosphere.

S is handling things well.  She is very up and down though.  Most the time she is quite hyper and incredibly cute, the rest of the time she is extra sulky and all of the time she is more demanding and clingy than at home.  She does seem to be enjoying it all though.  She is quite a water baby and is sleeping very well, better than at home, which was my greatest worry before we left.  It seems we shouldn’t have a bed time routine, just chuck her in her cot when she asks us too and then watch TV in the same room as her and she goes straight to sleep and sleeps though!  She also seems to have suddenly weaned herself off bottles which has been surprising but a welcome development.

Practical Information
car Kata-Phuket Town 200 baht each way, about 20 minutes
food in Kata starts at about 100 baht for a simple pad thai or fried rice. Most our meals cost around 600 baht which gives us two drinks and three simple thai dishes.  That is going to cheaper, but still very nice, places.  There doesn’t seem to be more local options around and even the street food is pricey compared to Bangkok and other areas of Thailand we have been.