The drama of travelling from Penang to Krabi

Last week we had the unfortunate experience of having to travel overland from Penang to Thailand. I say unfortunate because:

Point 2 and 3 made me especially bitter and no doubt made the journey even more painful.

Anyway, if you are considering doing this journey yourself, here’s all the info you need to make it a success! 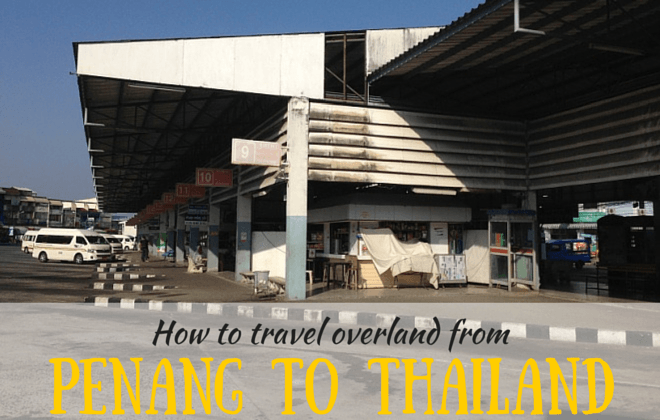 This is the problematic part of this journey. There are no normal buses that run between Penang and Hat Yai, only tourist vans.

We had been reluctant to take one of these after reading stories about them stacking people in. I have had plenty of unpleasant experiences with these backpacker shuttles world wide and never understood the attraction. However, extensive research showed no choice so we booked what sounded like the best contender, New Asian Transport.

We went to their own office so we could ask questions and be very clear about where it left from. We did this a week in advance. I left with a bad feeling primarily because she hand wrote our tickets and did not write the details anywhere else.

On the morning of departure, we caught a local bus there arriving about 50 minutes early. Thankfully, I went straight into the office (the van was to depart from outside) just to double check that everything was ok because of the bad feeling I had. Everything wasn’t ok.

There was no bus coming. 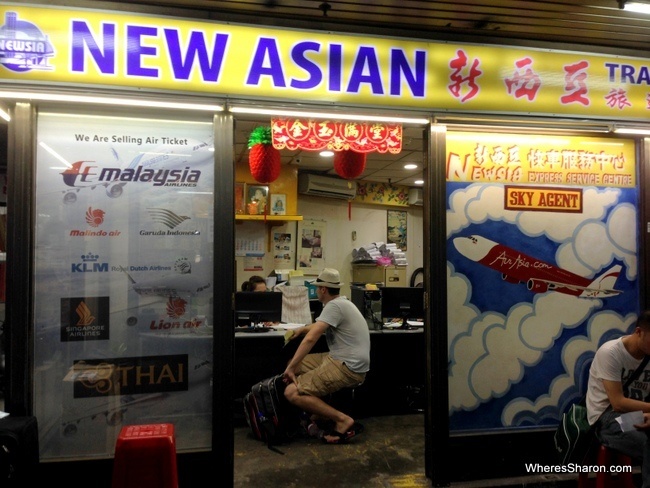 J’s turn to try to sort it out

I am not sure if this is because they did not record our booking or if they just decided not to run it at that time. As always in these situations, suddenly the people refused to talk English to us. In their defense, they did spend the next half hour on the phone and eventually came up with a solution – they would taxi us to Butterworth and we could get on another bus there at 1:30pm. We hoped this was true!

It took about an hour for us to end up at the Butterworth bus terminal. We were handed over to someone else who took us to a corner of a room in front of a door, handed us a ticket and told us to wait until 2pm. It was all confusing and disconcerting and was made worse by where he told us to wait. There wasn’t any space and the women who were looking after the toilet across the corridor kept getting annoyed by our kids making noise.

I walked around the terminal looking for hints. According to one of the booths, there was a bus to Hat Yai at 2pm which gave us hope. We showed her our ticket hoping for confirmation that that was the bus and to find out where it left from so we could leave our corner and wait somewhere more appropriate. She shooed as away and wouldn’t say anything.

By 1:45pm, we had had all we could take and went to wait outside. Eventually, we were directed to an area of the bus terminal for our bus, and a bit after that, we were taken out to the road along with some other people to wait for the bus. About 2:30pm, a KKKL bus arrived from KL on its way to Hat Yai! Yay, we were on a bus! 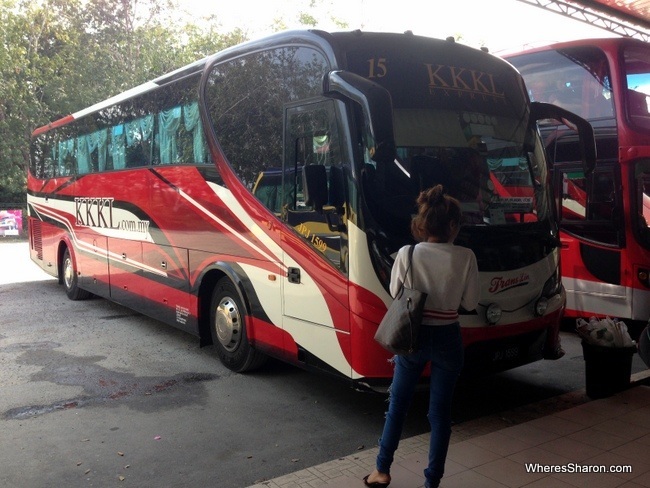 Our KKKL bus from Butterworth to Hat Yai

This journey was quite smooth. We wish we had come across this bus in our research as I think it is a much better alternative than one of the backpacker vans. It was a comfortable, only 3 seats across, big bus that when all the way to Hat Yai without us changing vehicles. 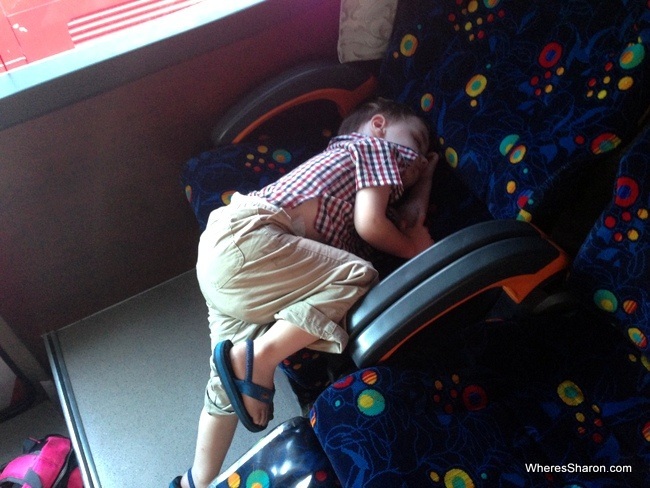 Z finally has a nap

We had a stop near the border to eat and go to the toilet and then stops at each border post. It was all quite smooth although we waited 45 minutes at the Thailand border. We were asked a few questions about where we would be staying.

The rest of the ride was very smooth. It ended up taking about 4 hours all up.

Hot Tip: Catch the KKKL bus from Butterworth to Hat Yai instead of the backpacker bus from Penang to Thailand.

It is cheap and easy to get between Penang and Butterworth. The bus station is next to the ferry terminal.

Price: RM35 per seat (no kids’ discount). This was the price for the original backpacker vans from Penang to Hat Yai. I am not sure what the bus would have cost (probably cheaper). The ferry from Penang to Butterworth is free. The local bus in Penang from Batu Ferringhi to Georgetown is RM3.40 per adult. Our kids were free.

By this point, it was late so we spent the night in Hat Yai. I recommend this as it is a long way on to Krabi (or to Phuket if you are travelling Penang to Phuket). 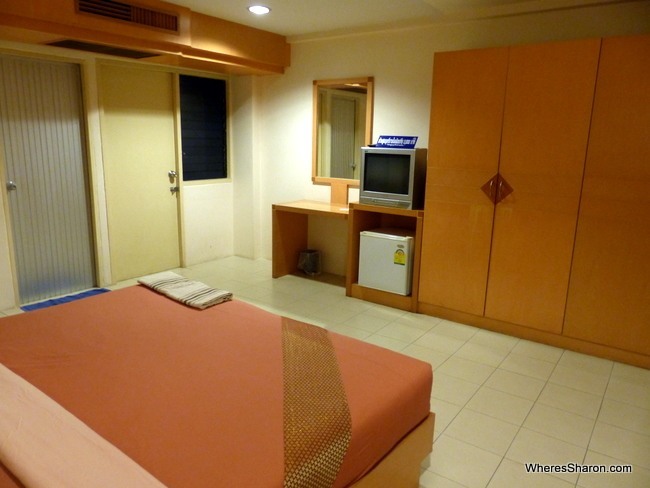 Our room at Thung Sao Mansion. Clean, big and cheap

We stayed at a great little hotel called Thung Sao Mansion near the bus station that was only 500 baht (less than $20). It was an easy walk and featured a big clean room, fridge, own bathroom and balcony. It is probably one of the best value budget places we have stayed. It is surrounded by shops and close to a big shopping centre. The internet was great.

Check out more about the Thung Sao Mansion including the latest bargain prices.

If you are looking for something a bit nicer, look at the Chestnut Hill Eco Resort here.

Step 3: Bus from Hat Yai to Krabi (or Phuket) 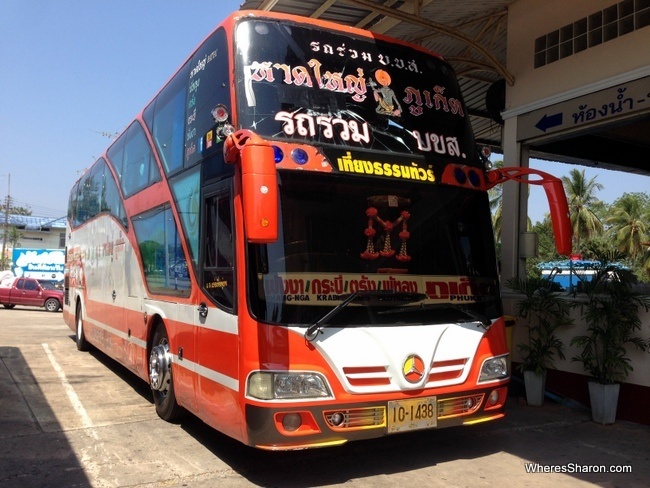 Our bus to Krabi (and it went on to Phuket)

It was very easy to catch a bus the next morning from Hat Yai onto Krabi or Phuket. The buses run hourly and I suggest just turning up when you want to go. We checked out the bus timetable the night before, but the buses didn’t actually run at the times we were told. The bus terminal is pictured in the top photo on this page.

It took about 5.5 hours for us to reach Krabi. There were many stops on the way, although unfortunately all of them were in the first half of the trip which was not good for preschooler bladders! I recommend that you eat whenever you get the chance to or the chances disappear. 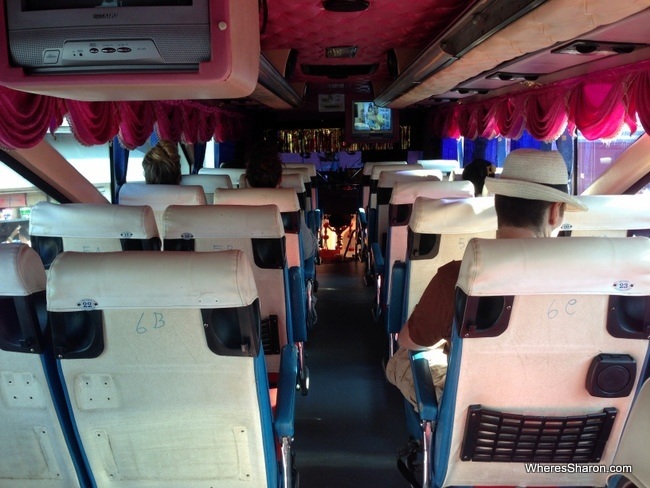 The bus was comfortable and we have no complaints except for the lack of stops in the last half of the journey and being told the last stop we made was only ten minutes when it was actually half an hour and we should have eaten lunch. The bus we caught stopped near the Krabi bus station and then went onto Phuket.

Hot Tip: Catch the local buses between Hat Yai and Krabi/Phuket. They are cheaper, run frequently and are comfortable.

Krabi is the major town in the area but does not have a beach. When most people talk about going to Krabi, they actually mean Ao Nang – the nearby beach area.

From Krabi, there were two options to get to Ao Nang – taxi or songthaew.

Songthaew’s are basically pick up trucks/utes with bench seats in the back and a roof. The “taxis” in Krabi/Ao Nang tend to use the same vehicles unless you book ahead. The difference is that they are for private use. The songthaew’s are the local buses and run on set routes regularly. The vehicle on the left is an example of one for private use. The ones that run as buses between Krabi and Ao Nang are white. 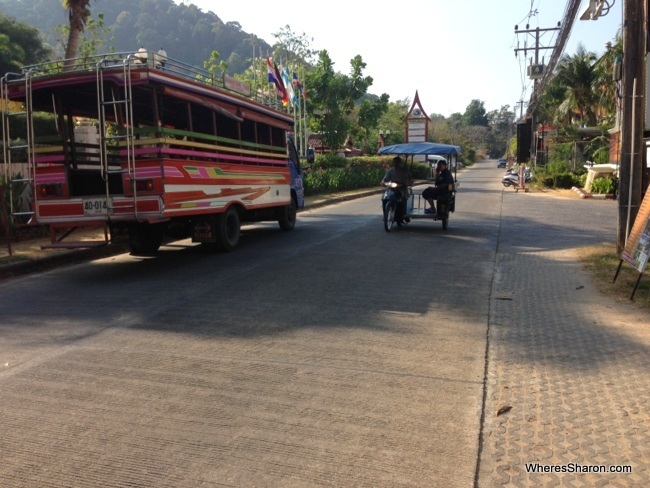 The white songthaew that leaves from Krabi bus station will take you to Ao Nang. We took this. The ride was smooth and easy (if a bit squished) and the kids enjoyed it. It took about 45 minutes. You can get out wherever you want along the way by pressing a button.

Price: 60 baht per adult. Our kids were free, but Z was on the lap once it was full.

Buses from Penang to Thailand

It is also possible to buy tickets on the backpacker bus from Penang to Krabi – assuming they run of course! These go via Hat Yai and I have read stories of them getting packed absolutely full once in Thailand. Given the local buses are cheap, easy to catch and more comfortable, I would change buses at Hat Yai.

You can also buy tickets for the backpacker van just from Hat Yai to Krabi. Again, I would stick with the local buses.

Trains from Penang to Thailand

It is also possible to catch the train from Penang to Hat Yai and then catch a bus on to Krabi (the trains do not go to Krabi). We did not take this option as it was supposed to take longer and they left at awkward times of day – we did not want to be catching a train ultra early or arriving at night time. It was good we felt this way as all trains were completely booked out a month in advance for all of February up to February 23 – I assume in part thanks to Chinese New Year.

Flights from Penang to Krabi

This would be my favourite alternative! It was so nice and easy when we returned, flying back from Krabi to Penang. Firefly and Malindo Air both fly between the two places with prices starting at only RM109 when there is a sale – this is not much different to what it costs to travel by bus with a break of journey in Hat Yai. It takes only an hour. 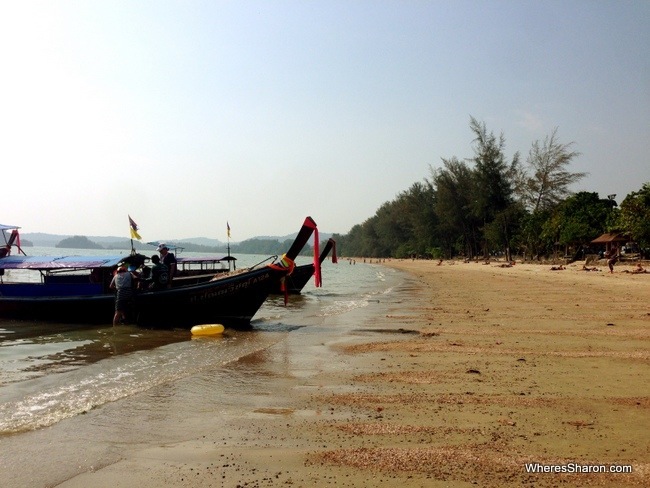 Our first sight on arrival helped ease the pain of the journey!

We made it! It wasn’t fun, but other than the problems at the beginning, it wasn’t terrible either. All up, it took a lot longer than we expected which made it quite painful, and I’d personally highly recommend just taking a cheap flight and forgetting about going overland, especially if you were on a short trip like us.

Have you taken this journey? Any tips/experiences to share?