11 Months in and the Biggest Announcement Ever!

Wow, it’s hard for us to believe it’s been 11 months since we set off on this adventure. We had no idea if we still would be away at this point. We just hoped that we would  be able to build an online business that would give us the choice to be wherever we wanted. Thankfully, we did!

It’s been a little while since I last wrote an update. At that point, we were hitting 9 months and just finishing our massive adventures in Europe.

I let things slide update wise as we were working on something BIG.

So big that it would have been impossible to be able to write an update without sharing it and we weren’t ready to share. In fact, it’s the biggest news we have ever shared on this blog.

So what is it?

Well, see for yourself… 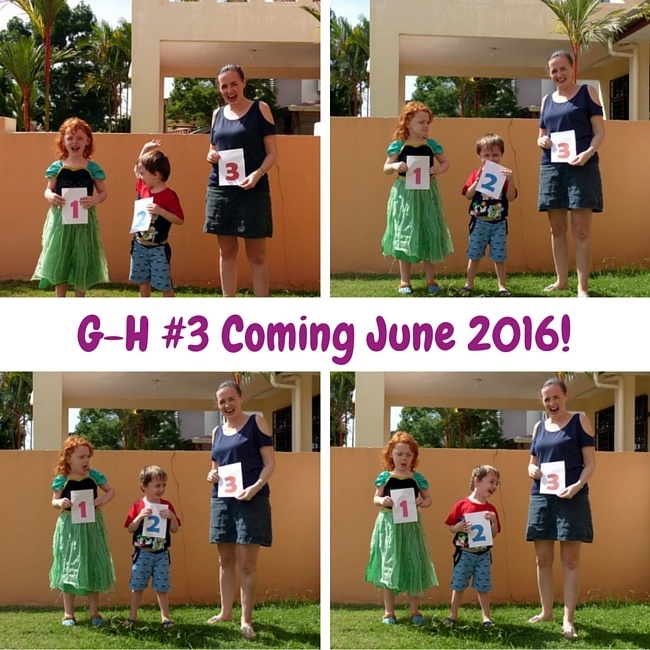 We are having another baby!!

We found out just after we returned to Penang that we had brought back an extra special gift from Europe.

It changed everything for us in the last couple of months as I have just been so bloody sick. It’s been a bit of a nightmare for me and I have been basically stuck in bed or lying on the couch since about mid October. Even sitting up for any length of time can lead to some bathroom time.

I found TBEX (travel blogging conference in Bangkok which I spoke at) very hard and I apologise that I wasn’t able to talk to people and hang out as much as I would have liked. It was lucky that it was when it was and not even a week later or I don’t think I could have done it.

Unfortunately, this is nothing new for me and is basically how I felt when I was pregnant with S (so another girl maybe?), but it has not made things much fun for me.

On the upside, I have been so thankful to be away. I hate to think how I would have ever coped with this at home with J at work. I have been able to take it as easy as I need with J taking care of the kids and I thankfully have my business set up in such a way that I don’t need to actively work anymore if I don’t want. I actually earned more money than ever before in October despite the fact that I barely worked.

The best part, however, has definitely been S and Z’s reactions. They are so so excited to have another sibling. They like to talk about what they are going to do with the baby and have been working out who will help me when, eg S will help me at night time and weekends and Z will help during the day and mornings 😀 They are just so sweet and it is nice to get to share it with them this time as S was too young to know what was happening when I had Z.

How does this change things? 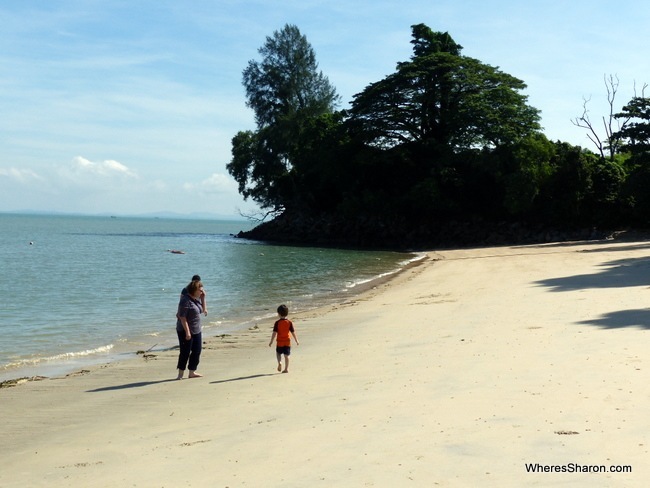 My mum and brother visited us in Penang which was awesome!

It hasn’t changed our immediate plans much although we didn’t get to use our plane tickets to Dubai 🙁 We should have spent the last part of November exploring the UAE but 1+4+9 hours of flights would have been hell and a bit pointless since I would have just got there to lie in bed!

Instead, when we left Penang in November, we headed to Port Dickson and Kuala Lumpur in Malaysia. Both places were easy to get to and are home to two of our favourite hotels. I knew I could take it easy and have no problems. 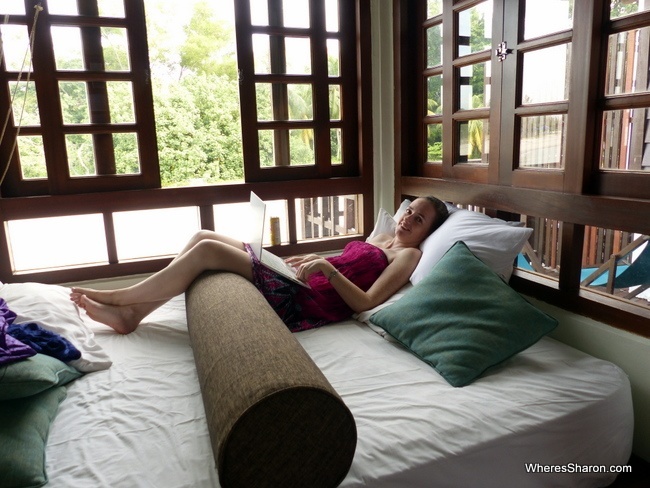 Updating this blog in our water chalet at Avillion Port Dickson. The only way I have been able to work lately is lying down with cushions!

We are hoping it won’t change much else but we will see. In my previous pregnancies I have not started feeling better until 16 weeks – that is not until Christmas Day! This baby actually has the same due date as S, albeit 6 years later, so it makes it easier for me to remember when milestones are likely to occur.

It doesn’t change our plans to go home and deciding to go back in late January had nothing to do with this. If anything, having a baby makes it more enticing to stay away.

It would be so much easier to be somewhere like Malaysia with Josh around all the time, cleaners and cheap take out. Instead, I am scared how hard things will be back in Australia. J will be in a new job so probably will only take the absolute minimal time off and I am already worried about how the logistics will work with the other kids when I’m recovering from a c-section. Probably the biggest downside of being pregnant right now is that I’m finding it very difficult to keep my mind in the present and keep thinking ahead to everything we will have to do when we get home.

I also love the idea of having a baby in a country which would give all of us a second citizenship.

However, we are very set on going home. We really want S to go to the school in which we have enrolled her in Melbourne. We have already paid the first lot of school fees, so we are set on this path.

At the end of the day, I am not interested in home schooling at this age – I have no idea how I would even do that on top of running a business, caring for a newborn and just being a mum. Teaching reading and writing seems very labour intensive and, quite honestly, boring. There’s a reason I was a high school teacher!

It’s also very important to us that she learns another language and a bilingual school seems to be the best way to do that. She will have 90% of instruction in a different language. This is not something we could give her ourselves.

We could obviously send her to a bilingual school in another country, but the fact is that we love Melbourne. If we have to commit to a place for at least a few years then honestly this is the only place that we are confident to committing to. I just wish it wasn’t so expensive! We have no doubt we will take off for an extended period again though. I want us all to learn Spanish!

I am hopeful that at some point soon that my business will get to the point where J can at least just do the occasional IT contract instead of working all the time. I am not far from that point, although I will not have nearly as much time to work next year especially with four months maternity leave (if I stop working for 4 months, the Australian government will actually pay me!).

We definitely plan to keep travelling – that will never change! We will just have some extra things to consider with 3! I am already dreading booking accommodation. It can be hard enough with 2 kids!

So enough of the boring stuff, where are we actually going?!

Well we left Penang on November 19 for good at the end of the school year. We were sad to go. I feel so lucky that we ended up in Penang as it was just so perfect for us. I think if we haven’t found Penang, our home and our preschool that this year would not have been such a success and we may have returned to Australia by now. We definitely learned that travelling full time is not for us with our 4 months in Bangkok and Europe and having this base in Penang is what kept us sane and loving this year.

Since then, we have been to Port Dickson to stay in a beautiful water chalet that we first visited a couple of years ago. We then headed to our favourite hotel anywhere, Berjaya Times Square Hotel in Kuala Lumpur for a week of visiting our favourite things in KL and taking it mostly easy. 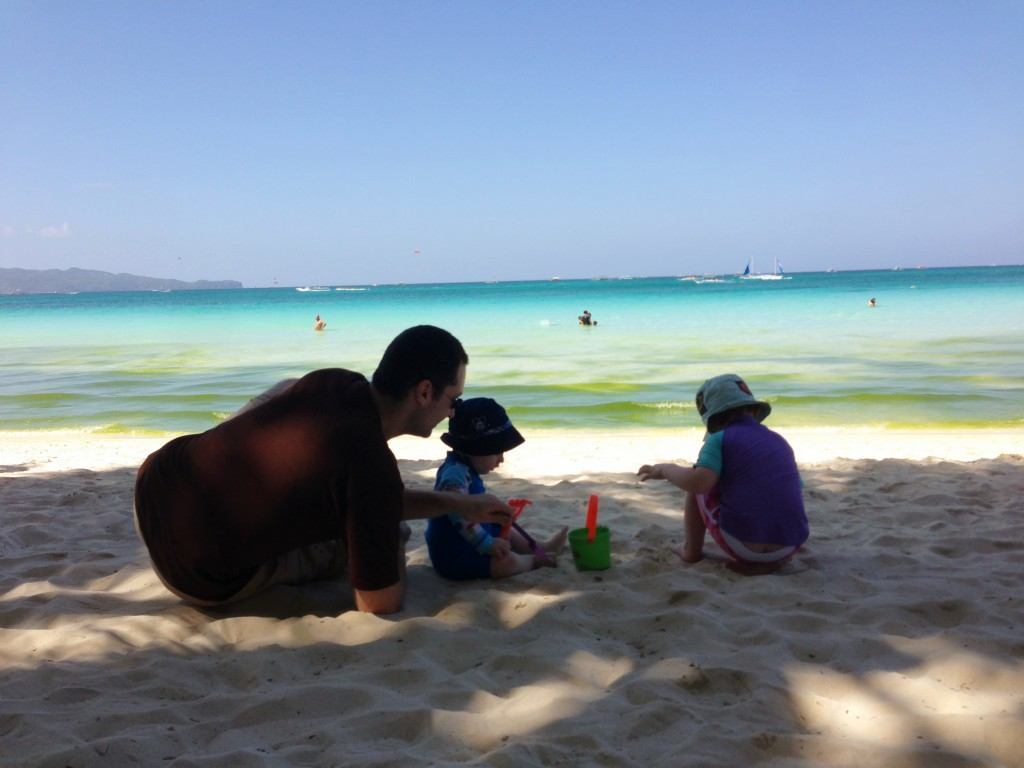 Enjoying the beach at Boracay, Philippines on Z’s first birthday

It was then back to the Philippines to see more of country I fell in love with in 2013 and that’s where we are now. We are exploring the islands of Bohol and Cebu and the islands that surround them.

After the Philippines, its back to Bali. We had some mixed feelings about Bali when we visited at the start of the year, but we are excited to return and see some new parts, especially as we have two great pool villas booked. I must admit that the cheap, awesome pool villas which are seemingly everywhere are our primary motivation for returning. It is just so luxurious to have our own pool! And the fact we can have one for about AUD$50 a night makes it even better! 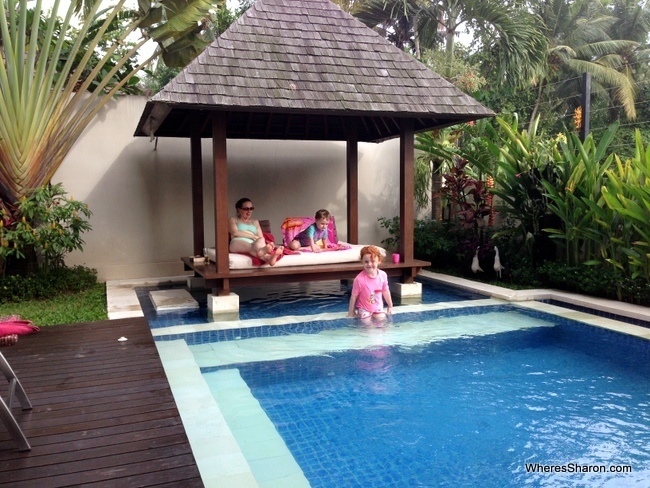 Our Ubud pool villa – who wouldn’t want to go back to this!

We are in Bali for Christmas which was also a big reason for our return. It’s important for J to have a traditional Christmas lunch and we are hopeful we can find that in Bali with all the Aussie tourists.

We are then off to see more of Indonesia – the Gili Islands, several places on Lombok, Surabaya and Jakarta.

Finally, we will fly to Singapore, visit Johor Bahru and finish off back in Kuala Lumpur before flying home to Australia! So we have an amazing 7 weeks coming up. Let’s just hope I feel well enough to enjoy them!

So that’s it from us! Lots of exciting times coming up!

You can now read our 12 month update!